Well, I guess as the silly season is in full swing, this is as good a time as any to introduce our inaugural awards ceremony. So grab yourself a can of beer, sit back and relax in a comfy chair as I take you through our year in the form of the 2008 EFW Awards. 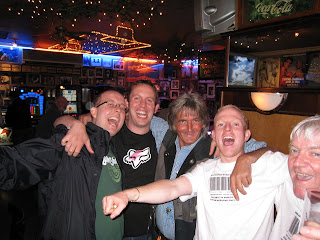 Following the Ingolstadt v Karlsruher II match on a Friday night in April, Big Deaks, Nick and I returned to Munich to celebrate the fact we weren't at work. After many beers, we were convinced the landlord of the pub by Munich station (third in from the left - as if you need telling) was Rod Stewart. A long night of singing Rod classics on the seats and tables of the pub ensued.
The best thing we saw at a railway station 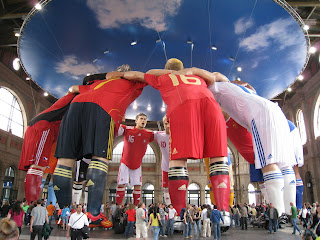 Fair play to Adidas for erecting this splendid piece of art in the concourse of Zurich station during our trip to Switzerland for Euro 2008. I don't think this one will be beaten in 2009...or will it!?
Best thing we saw at an airport 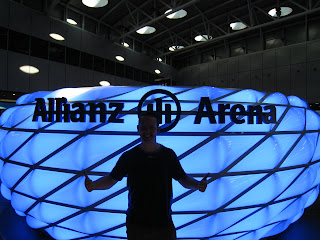 Even in my most hungover, worst ever mood, have to go to work, end of an EFW, tired after weekend on the beer mood, I was able to appreciate the effort they'd gone to at Zurich Airport to recreate a mini 'Allianz Arena'. I still don't know why it was there but I'm glad it was.
Best scoreboard 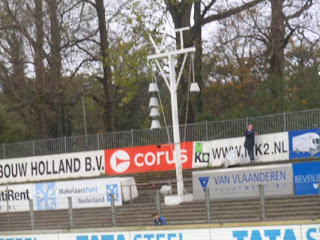 A closely fought contest this but there had to be one winner. Of course it was this beauty at Telstar FC which was sent in by our EFW chum Patrick from Antwerp. Just to recap as if you didn't know, they hoist up a basket to denote a goal has been scored. One on the left for the home side and one on the right for the visitors.
Runner up 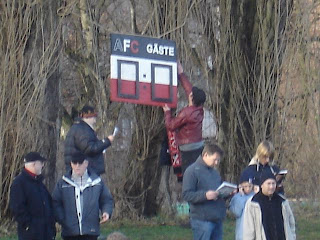 I'm simply loving this. Again sent in by Patrick from the Altona 93 v Holstein Kiel match near to Hamburg. Lots to like here. The fact that the man in the red jacket brings along his own scoreboard to the match. Also, note that the two fans in front of him are not even the remotest bit interested that someone behind them is erected a scoreboard between two trees. In fact they can't even be bothered to look up from their books, that must be some read.
Best balancing act whilst swinging a fast shoe award 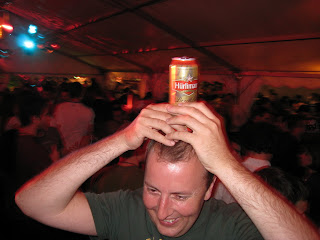 Full marks to Big Deaks here. Celebrating the fact that we'd just seen officially the worst ever Euro 2008 match - Romania 0-0 France - he manages to both dance and balance a can of strong lager on his head during a post match party in Zurich.
Closest we got to the World Cup award 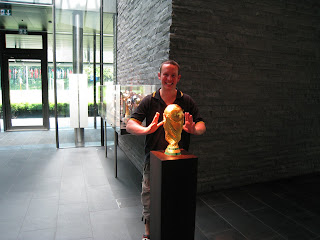 This is me at FIFA HQ in Zurich. To this day I don't know why I didn't just pick it up, thrust it in the air and then run around the building with it. 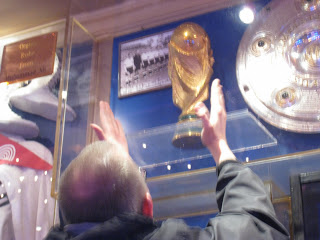 This was the closest Nick got. After a few beers in Munich he just had to jump on his seat and worship the trophy.
The best EFW for beers 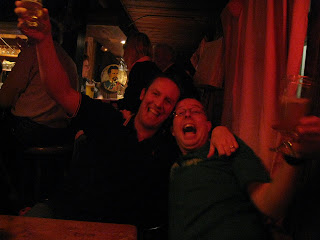 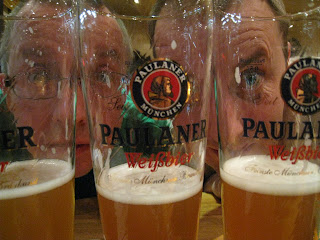 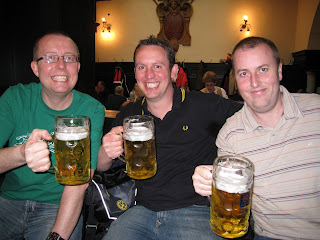 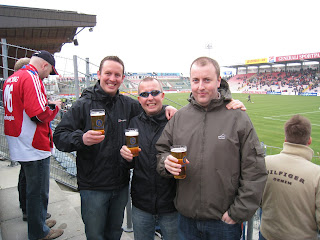 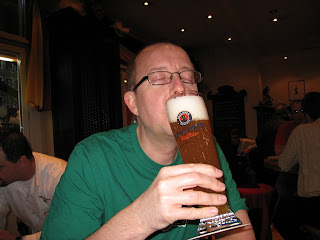 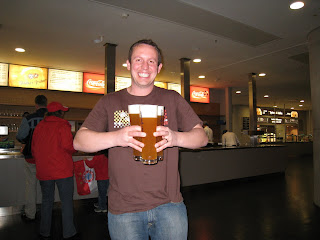 I think these photos are conclusive proof that our trip to Munich in April was a good one for beer.
Best floodlights 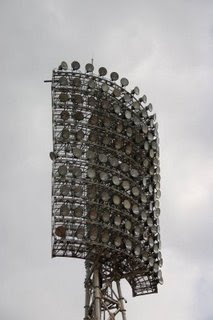 If you read these pages often enough you'll realise that we have a slightly unhealthy regard of 'floodies'. These were our favourites this year though, sent in by Mark from his trip to Belarus to see England at the Dinamo Stadion, Minsk. 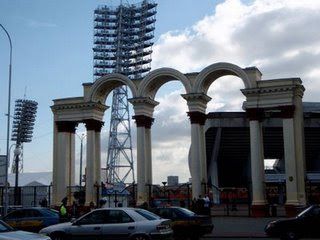 Just for good measure, here they are again. I'm not altogether sure I could ever get bored of looking a pictures of them. 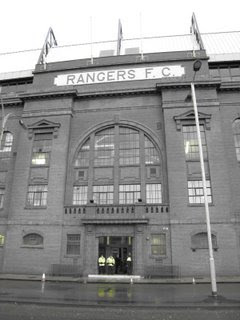 We learnt the hard way that planning a three match EFW in Scotland in January wasn't the wisest thing to do. Arctic conditions meant that our games at Airdrie & Clyde were postponed due to frozen pitches and this was the closest we got to Ibrox because Rangers called theirs off because of a waterlogged pitch. Thankfully we did manage to race over to Falkirk v Aberdeen, visit Partick Thistle, raise the European Cup at Hampden Park and visit this little beauty: 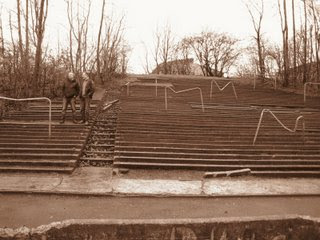 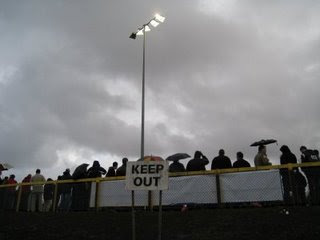 I took this at the Sutton v Notts County FA Cup match. Ken Loach would have been proud of this one.

Best break in to a stadium 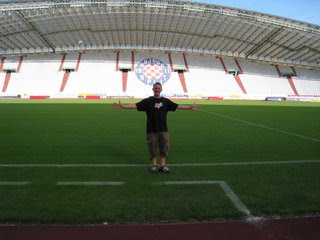 Hadjuk Split. It was the day before their match with arch rivals Dinamo Zagreb and there was a ring of steel around the ground. They said there was absolutely no way I was going to get in. They should know me better than that. When the wife suggested we have our lunch in the ONO Estadi home to Real Mallorca, I thought she was joking. Obviously not. 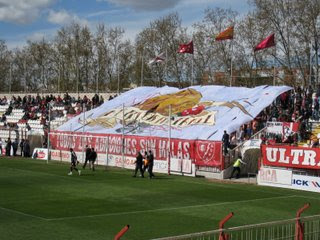 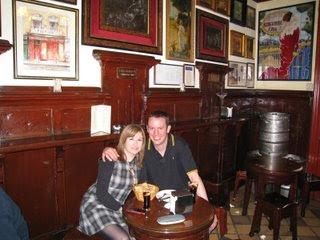 ...lunch with the wife in one of our favourite Madrid bars with free drinks from the landlord.. 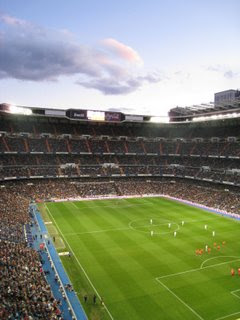 ... and dinner round at Real Madrid's pad with Valencia as guests. Easily the Romania v France match in Euro 2008 in Zurich. 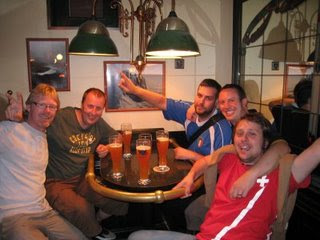 It was so bad that it took us seven hours in the pub to get over it! 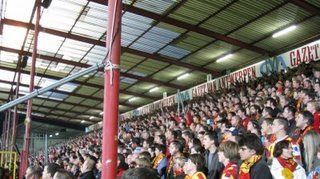 I loved the old school terrace and atmosphere at KV Mechelen. They also provided us with the song of 2008 which was their terrace anthem 'Gold' by Spandau Ballet. 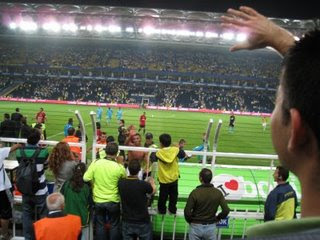 Colin Kazim-Richards giving me his shirt after the Fenerbahce match. Cheers old chap!

So they were just some of the EFW highlights during 2008. More of the same during 2009!? I think so don't you!? There are loads of people to thank; Big Deaks, Nick, Baines, Roland, Patrick, Jordi, Rod & Colin Kazim-Richards, Ivi, Mighty, Alberto, the couple that gave us a lift in the rain at Ingolstadt, landlords across Europe, Rod Stewart, cuddly toy, is anybody still reading this!? Probably not, anyway, you know who you all are. Most of all I'd like to thank anyone who has logged onto this site to read this nonsense during 2008. I don't charge, there are no adverts, it's a public service and it's all for you. Now can somebody open the windows.