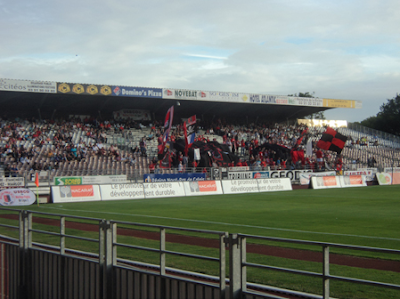 Never Mind The Boulonnais
US Boulogne 3 Angers SC 3 (05:08:11)
It's raining outside. I've got a few days off work. There's nothing for it, there's no other possible thing I can think to do – I'd better hop on the ferry to France and watch football, writes Jim Stewart. There's a few reasons why I decided this was not simply a good idea but probably the only idea. Firstly, when you leave it late to sort something out – and I'm spectacularly good at being that bad at times – your choices are limited. Air fares have jumped from cheap, to reasonable, to through the roof – and so has the Eurostar. Meanwhile, the great thing about the cross-Channel ferry is that as a foot passenger the price stays the same - £29.50 each way. Bargain! Secondly, and obviously the most important thing, US Boulogne were at home in a crunch (Ok, not really but I need to build the excitement) Ligue 2 game wth Angers SC on the Friday night. Tickets were cheap and plentiful, what more could you ask for? And finally, I needed to exorcise some demons and put in a good French Football Weekend.

My previous attempt to watch Ligue football had ended in complete disaster when I travelled to Lille, and failed to get into the stadium. It's a very long story as to why and I won't bore you with all the details, but in short I thought I had a match ticket, and it fell through with less than 24 hours to go. By this time the match had sold out, as Lille were edging towards the league title. Various valiant efforts to obtain one failed. I decided to rock up to the ground an hour before kick off and join in the pre-match action, maybe watch the TV game in a local bar – only to find Lille's stadium in the middle of a residential area with not a bar, cafe, shop, hot dog stall or beer seller in site. Needless to say, it was a weekend to write off so this time I set off from the white cliffs of Dover in hope that this time things would be better.

I say white cliffs, I couldn't see them as the rain by now was of biblical proportions. It continued across the Channel, through Calais and there on down the coast to Boulogne. The town used to have its own ferry service from Dover, and of course the famous hovercraft, but sadly both are consigned to history which means a slightly longer trip via Calais and a train. 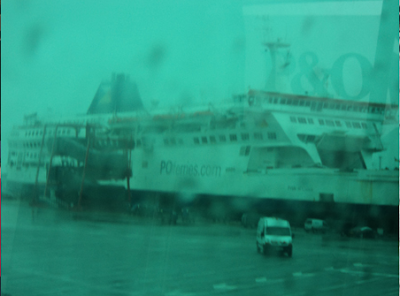 We're all going on a Summer holiday... Arriving in Calais. #LightDrizzle
I arrived early evening the night before the match, and ventured out for a bite to eat, tackling the French-only menu for a seafood special followed up by a late night Guinness or two at the nearest Irish bars before heading back to my hotel, a 15 minute walk away by Boulogne's pretty excellent beach. Unfortunately I was woken in the small hours by a disturbance downstairs. Nope, not in the hotel, just further down my good self which was caused, I believe, by the previous evening's starter of mushrooms and cheese which took great exception to my internal system and caused significant technical difficulties as dawn broke on a much sunnier day the French side of the Channel.

Still, onwards and upwards and after the following day of seeing the sights of Boulogne (nice town, good place for a day, do check out the fortress) and a bit of time chilling by the beach, it was time to head off to the ground. This time, to avoid a Lille repeat, I had shelled out ten euros for my seat early on by popping to the ground at lunchtime. After a swift half at the newsagent, turned matchday local, near the turnstiles it was time to head into gloriously titled Stade de la Liberation, handily based a few minutes from the town centre and barely a long goal kick from Boulonge's impressive fortified old town. 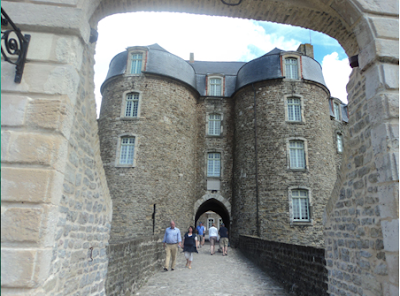 Fortress Boulogne. Unlike either team's defence later that night. #Leaky 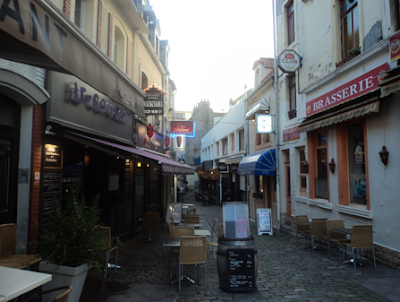 Rue of the bars - and I'm rueing (sic) one restaurant. #Parp
US Boulogne are enjoying good times of late. A mere six years ago they were in the CFA1 league, the fourth tier of French football. They won that, then in 2007 won the National league to be in Ligue 2, where they've spent 27 years of their life. But in 2009 this small town of 45,000 Boulonnais (no cheap gags about sauce please) saw its team reach Ligue 1 for the first time. The dream was to last but one season, and they finished eighth in Ligue 2 last time around.

This may well be the reason why the stadium looks as it is – a welcome breath of fresh air from the modern boring bowls, this looks as if it's had stands added here and there, probably as the rise through the leagues required more seating. It has a six lane athletics track around it, although from the sides at least this was little hindrance and the views were good. The main stand has been extended out on one side, and there's a further bank of fairly temporary seating to its right. Opposite, where I sat, is the Franck Ribery stand – yep, he's the hometown boy who played for the club for two seasons – with an upper tier of backless seats and the ever so slightly posher seats in the shallow front. Away to the main stand's right is the home end, with a kind of terrace bit in the middle and seats around the sides. In between there and the Franck Ribery stand the visitors are housed in a pen, and in the case of tonight's visitors Angers that was all of about 20 hardcores. Beyond to the far left of the main stand was possibly the most bizarre stand of all – another temporary affair seemingly miles from the pitch – so far in fact several of the spectators instead chose to wander up to the fence pitchside. 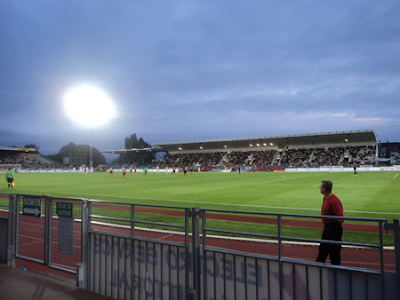 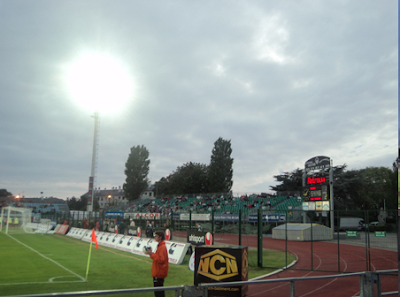 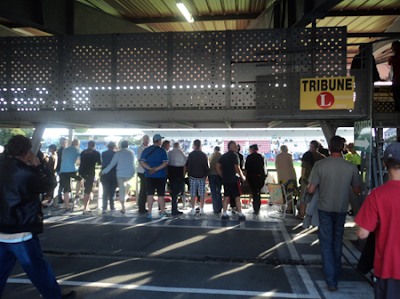 Why sit when you can stand in the Franck Ribery? #Prostitu.. [snip - Ed.]
Just over 8,000 rocked up on a balmy August night, although when I found my seat I was instantly chastised by the bloke behind me who said his daughter couldn't see now. Being fairly sparcely populated, I duly obliged, shuffling along – and typically the one spare seat I chose was where the next person coming in late was. Lots of Gaillic grumbling and shaking of heads ensued.

Anyway, to the match – Boulonge in their red and black AC Milan kit against the Real Madrid all whites of Angers. It was the first home game of the season and the home side were pleased to see themselves go ahead through a penalty. Frankly I couldn't see the incident myself (I'm feeling very Wengerish already) but  everyone else seemed pretty convinced about it so I'll go with the majority. Well done ref. But that all went sour when Boulogne's defence provided pretty inept at defending any set piece and by half time were two goals down.

With the crowd less than happy I headed to the grassy knoll behind the stand for refreshment, only to find myself having to dodge half the male population of the stadium relieving themselves next to any bush. And if there wasn't a bush – well, just going on any spare spot of grass. There must have been no loos? Nope, there's a big one 20 yards away. They must be grotty Trainspotting style then? No, I took the revolutionary step of actually going to the toilet inside a toilet building and can vouch I've seen much worse - Portsmouth away in the 90s springs to mind. There must have been a long queue then? No, no queue at all as they were all outside spending a penny on the grass. Anyway, I grabbed a couple of small Heineken and attempted to buy a packet of chips, which ended up having a sausage in it and costing twice as much. Still, when in France have the local delicacy of, erm, sausage and chips I say.

Back to the football, and having annoyed most of the people around me I opted for the emptier section at the far end of the stand. Sadly, it was the end Angers were firing at and midway through they rifled home a third to put themselves 3-1 up and in the box seat. Frankly, that looked that – until the last 15 minutes. A looping header saw the hosts come back, and with two minutes to go they landed an equaliser, proving Angers were equally incompetent at defending from a dead ball as the home side was. 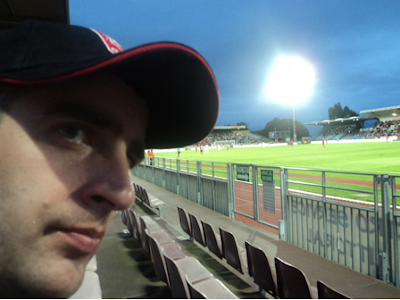 Eyeing up the unreserved seating. #NeverMindTheBoulonnais
So it ended three three, and the home fans dispersed into the French night happy with that. And that's what I sense happens at French football – they go to the game, they go home. The bars were conspicuously empty of the red and black army, even on a Friday night, so it was time to call it a day. All in all, my faith in French football is restored. And if you find yourself in the south east and have a free Friday night, find your sea legs and hop on the ferry to Boulogne (by Calais of course). It's well worth it.


Jim is the Editor of the marvellous http://www.eurofootballcities.com/
Follow European Football Weekends on Twitter
Posted by Danny Last at 10:50

Email ThisBlogThis!Share to TwitterShare to FacebookShare to Pinterest
Labels: Angers SC, Football in France, US Boulogne