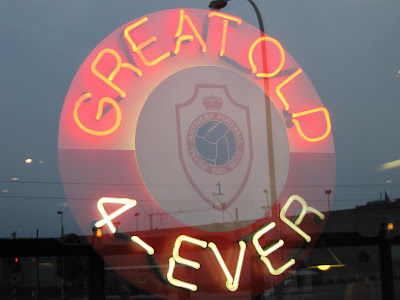 The Royal Family
Royal Antwerp 2-1 R Boussu Dour Bor. (26:03:11)
I once confessed to a member of the Guardian Football Weekly team that I hate flying so much, it takes episodes of their podcast to take my mind from thoughts of imminent death during flights. If you're reading this Bob Holness, Fiona Bruce or any of the other hosts of Call My Bluff - that's actually TRUE. So a trip to Belgium on the Eurostar - which exchanges the faffery and nervousness of flying with relative luxury - will always be placed next to a big tick in my book.

In recent years, fans of Forest Green Rovers have bonded handsomely with those of Royal Antwerp. It's a love-in that has blossomed through this blog. Past European Football Weekends have been frequented by both sets of fans, and now those fans go and see each others games on a fairly regular basis. This was one of those trips; EFW is a advocate of both clubs, so we went to join them. Brighton, Lewes, West Ham, Barnet, Whitley Bay, and Swindon fans were also on-board. One big happy Royal Family. 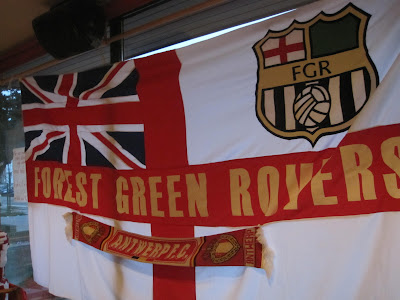 Forest Green Rovers + Royal Antwerp = Love-in
What's two hours on a train through a tunnel between friends when you have Stuart Fuller from the Ball is Round trying to explain  the classic 2004/05 Malaga teams 3-1-3-1-2 formation using empty beer cans as props? We were pulling into Antwerp's majestic train station quicker than you can say 'quizzical looks all round'.

We headed straight to the nearest Irish pub (come again? - Ed.). Yep, we broke one of the oldest rules in the EFW handbook; Page 7, section 3 clearly stipulates that Irish pubs should only be frequented on Irish soil. Personally, I couldn't give a mouse-sized shit about the English national football team - other opinions are available - but they were playing Wales and a few of the lads fancied watching it.

We moved on straight away after the game to a belting pub called The Great Old (Royal Antwerp's nickname) opposite the stadium. This pub used to be a hangout for the hooligans connected with the club, but times have changed and now it's most welcoming. Great beer too.

I simply adore The Bosuilstadion. It was built in 1923 and rather looks as though it hasn't had any work done to it since. If you look up 'Old Skool' in the dictionary, then you'll see a photo of Royal Antwerp's stadium printed underneath. On talking to a few fans though, and John Chapman - a journalist who used to cover the club - plans are afoot for a new stadium in the city. And Royal Antwerp want to share it with their bitter rivals Germinal Beerschot. Beerschot - they'll lose the Germinal bit of their name next season - want a 70/30 share of any profits in the new place, Antwerp of course fancy it should be 50/50. The plot thickens.... 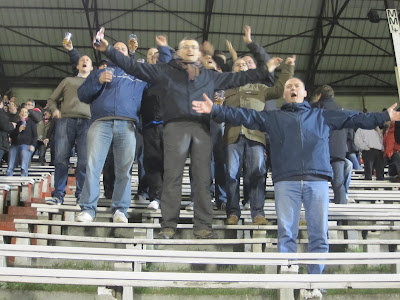 We love The Great Old (repeat to fade) 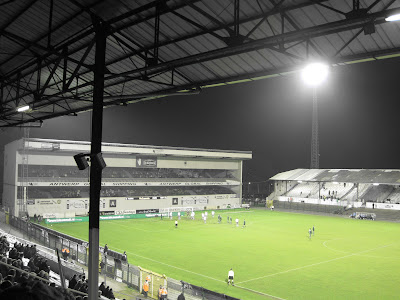 The stand to the left is known as The Fishbowl*. *This is the only note I took on my phone for this report during the whole weekend, so I'm telling you this fact, whether you like it or not.
Royal Antwerp have now been allowed to get involved in buying players again. This was blocked previously as they couldn't give necessary financial assurances to the league. However, the situation is still pretty grim. It's very complex - as always - but the club is still heavily in debt. There's an ongoing battle with one Tony Gram who leant Antwerp some money and got nasty when the loan was not repaid. Word is, Eddy Wauters ended up paying from his own pocket. There was also a deal where the club sold the stadium and grounds - at a knock-down price in order to keep going.

Eddy Wauters, who he? Well, he lived in the US for 12 months in 1957 (when in his early twenties) and he played for New York Hakoah. They won the league that year and Wauters celebrated by taking the team out on an open top bus with Marilyn Monroe on-board. As you do. Anyway, he went on to manage The Great Old, and now he's the Chairman. Talking of The Great Old - he is 77. 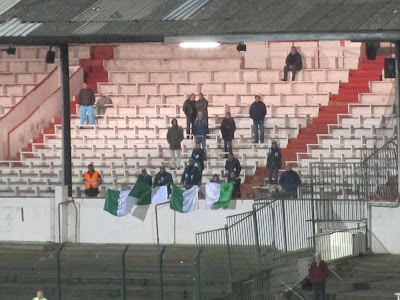 Green (sort of) Army. The away fans were few in number, but then again Royal Boussu Dour Borinage is a bit of a mouthful to squeeze into song. Most fans have given up trying. 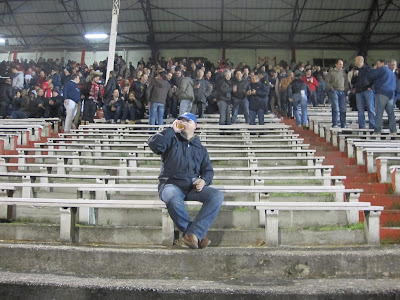 Life's a bench. Stuart Fuller from the Ball is Round enjoying life. 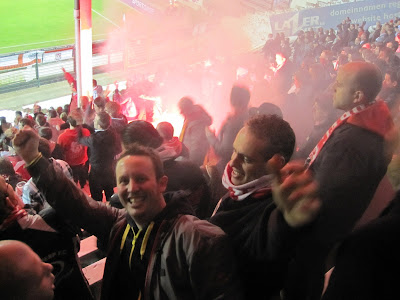 Flares are back. Not sure what I'm doing here, but I've got that stupid grin fixed onto my boat race. Must have been good. 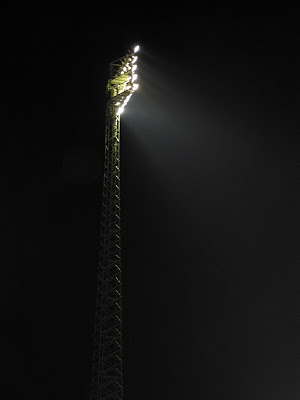 Floodlight porn, tick.
See, I didn't just sit about drinking all day and singing songs. I did find out a bit of background for you in between the ale. And we had plentiful amounts of that. They say travel expands the mind.; any trip to Antwerp certainly expands your waistline. It doesn't take a Ph.D to work out that a day at the football with a group of like-minded lads will end up in the pub. After the game which the home side came from behind to win 2-1, we headed for the bar at the stadium - which again, is magnificent, danced to Neil Diamond, met some of the players, went back on the pitch, emptied the club shop, you know - usual gubbins.

After that it was into town. Evidently, if you're in a pub in Antwerp and fancy drinking, it'll stay open until whatever time you like. Good new for having the time of your life. Bad news if the clocks go forward and you fancy getting up the next morning to watch a Belgian Division 4 game without feeling like death warmed up.

A bit of a fancy breakfast - boiled eggs and soldiers since you ask - and a bucket full of coffee later and we were on our way to Berchem Sport v Racing Mechelen just one stop on the train back into Brussels. It turned out to be a perfect pit-stop. The sun was officially beating down, the beers started to flow again, colour returned to our cheeks and a very nice lady sold us a special commemorative match-day program with a free CD of club songs for €2. They also gave away club umbrellas in the club *cough* megastore for every €15 spent. Quite handy when it was hotter than Greece.

Racing Mechelen have a fearsome reputation for football hooligans. Happily, today their fans weren't up for any bother. They gave their team great backing, lit flares, added a riot of colour to the day and were very welcome visitors. 1500 of them turned up, 300 of whom arrived by train. We know this because at games of football in Belgium you have very obvious plain-clothed policemen who appear to know every single fan by name. They dish out information and seem to be well respected.

The game ended up 1-1. In truth, the quality of football on offer wasn't too much different to the previous night at Antwerp. It's not tremendous, but match tickets are cheap and it really is a pleasant way to spend a Sunday afternoon. So, Berchem Sport and their manager Bert Selleslags can be quite happy with their performance in the Ludo Coeckstadion. Are those names funny? They made us giggle. And as for Racing, they will be promoted to Division Three next weekend all being well.

The train home was marred by myself hosting a podcast. Stuart Fuller and Andy Hudson from Gannin' Away batted away the questions. I hope this broadcast never sees the day of light. I can assure you Barry Glendenning and James Richardson are safe in their Football Weekly jobs. Anyway, it was a good laugh. European Football Weekends always are. You should try one someday. 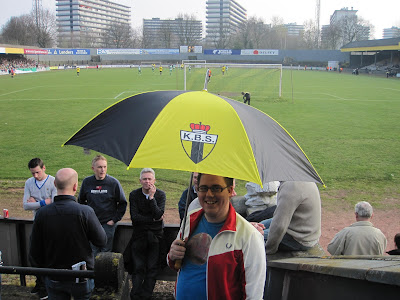 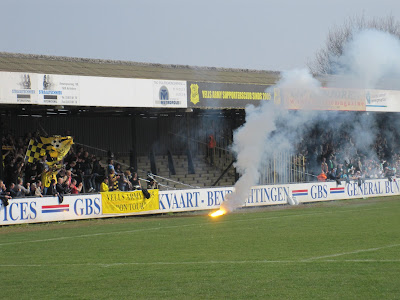 There is a light that never goes out 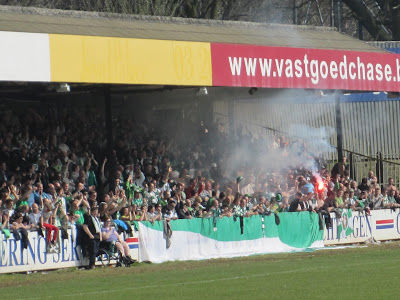 Racing Mechelen fans were out in good numbers 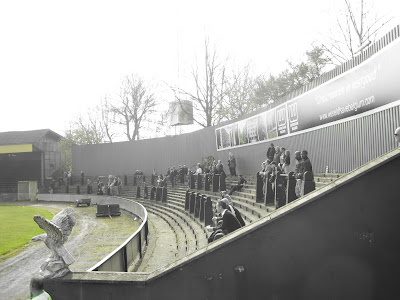 The Ball is Round version - well worth a read, as always.
- Feel free to comment below -
Posted by Danny Last at 20:43

Ludo Coeck was one of the most famous Belgian players of the 70s-80s, back in the days when we were good.
He made most of his carreer at Anderlecht before moving to Inter Milan and then Ascoli.
But his very first club were Berchem Sport.
He tragically died in a car accident near his home in 1985.
He was 30.

Re Boussu Dour : they come from one of the poorest region of Walloonia, le Borinage, and this is only their second season in the second division. Until 2 years ago, they were called Francs Borains.

love the comparison between the photos of the Royal Boussu Dour Borinage crew and your fine selves arms aloft in full voice - have you ever seen a bunch of travelling fans spaced out as evenly as those greens?!

Excellent piece. The picture taken from the stand in Antwerp makes it look like a really decaying old ground. In other words, just like my view at Selhurst Park if I turn my back to the Holmesdale....