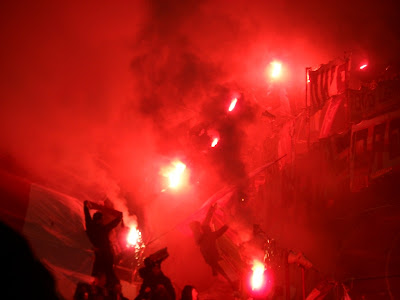 The Belgrade Derby: A World Phenomenon
Crvena Zvezda 0-2 Partizan Belgrade (26:11:11)
The taxi ground to a halt with the floodlights of the Marakana rising in the distance, writes Andy Hudson. A single policeman tried to control the traffic from six different directions; the angles of his hands lost amidst the steam billowing from his mouth. “You should take them to a whorehouse after the match; that’ll relax them and is what everyone should do here at least once,” the taxi driver mumbled to the lad in the passenger seat. Three of us sat shivering in the back seat, English only speakers and oblivious to the Serb delights the taxi driver had in mind for us for afterwards.

With time still on our side we made our way back towards the centre of town and a traditional Serbian restaurant called Mala fabrika ukusa, 2km away from the stadium instead of the place we were originally heading to which was set in the shadows of the Marakana. There was to be no pre-match pies for us; honey glazed pork served with horseradish ice-cream was knocked back with pints of Jelen before we braved the icy cold for the walk to the stadium.

We left the restaurant and hurried off in the direction of the ground. After turning two corners we could see the huge floodlights looming across the skyline, yet before we could see them, we knew what direction we were heading in; we followed the distant noise coming from the already packed Marakana. There wasn’t much talking amongst the home fans as we made our way under and over roads; across a small park; all the while getting closer to the stadium.  A nervousness hung in the air; similar to any other city on derby day. 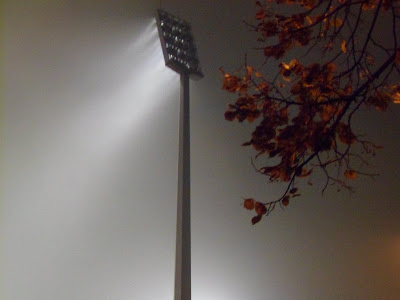 A huge floodlight looms across the Belgrade skyline. As does the cities biggest tree.
As we cut up along Ljutice Bogdana, one of the few streets that separate the Marakana from Stadion FK Partizan, we could hear flares going off in the stadium. My heart raced. The air had the smell of bonfire night and cutting through was the sight of people racing to the security gates. We had VIP tickets for the West Stand and headed up the stairs from reception. The section we were in was heaving with not a spare seat and plenty of people packed into the back rows. We quickly decided not to waste too much time trying to get our seats, with the throng of people crammed in it would have been foolish to try and get in. We had a word with one of the club staff who took us back downstairs and explained to security that we were to be in the stand amongst the Zvezda masses.

The greatest firework display I’ve ever seen then sparked to life to my left, in the North Stand, home of Delije, the Heroes. Three stands of the Marakana burned with red flares while fireworks exploded over the stadium. Smoke drifted across the pitch as the players emerged from the tunnel, densely obscuring the view:


The South Stand, home of Grobari and a second Partizan fan-group, Južni Front, seemed to be doing nothing. They were merely waiting. As soon as the Delije fireworks were coming to an end, they started their own


The match kicked-off with the whole stadium singing. The atmosphere could have powered a small country. Everyone in the North Stand was stood with scarves held aloft, more impressive than anything that could be mustered on the Kop at Anfield. The smoke hung in the stadium air, obscuring my view of the Partizan fans over to my right. From my standing position just next to the North Stand, stood in a packed gangway where every fan was singing, all if could see was red and white. Flares continued to go off several times a minute, with the firemen on the track behind the goal kept busy by the large number hurtling towards the pitch. 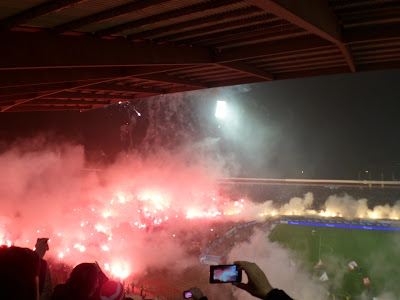 An explosive start to proceedings 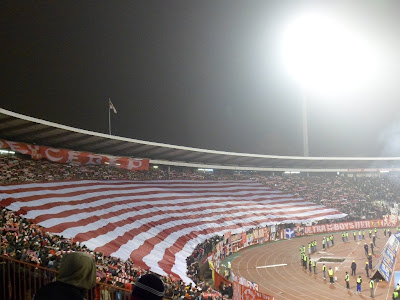 Lovely flag, but where are those flares? 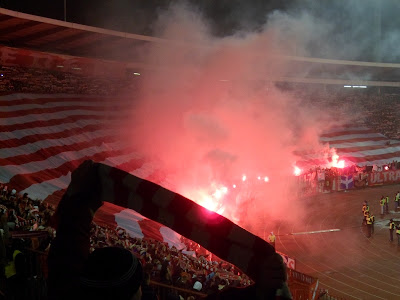 Ah.
I’d heard stories about how intimidating the atmosphere could be; how violence rippled across everything and that even for a neutral there’s an edge that can be troubling. Yet I never interpreted any of this for violence in any way; it was far simpler than that: this was passion. While some may disagree with me on this point, but flares being thrown on an athletics track where they are collected and quickly put out is a lot different to fists being smashed against another fan’s head. Not once did I feel threatened; neither before the game nor during.

Zvezda enjoyed the best of the opening exchanges though chances were at a premium. Flares in front of the South Stand caused a fire on the athletics track and then a fire was started at the front of the stand when pitch covers were set ablaze by the Partizan fans.

With every attack the noise increased and then three quarters of the Marakana went crazy with excitement as the referee awarded Zvezda a penalty. With the home club having taken the precaution of removing the plastic seats from the South Stand, the track filled up only with flares as Evandro stepped up to eventually take the spot kick. With many home supporters around me either peering through their fingers or turned with their backs to the pitch due to nerves, the Brazilian screwed his penalty wide of the post to cause the only period of silence amongst the Delije. That silence was only to last a moment as the noise suddenly increased to drown out the celebrating Grobari . Meanwhile, a few seats were being hurled onto the track from the East Stand, where one of the fractured Partizan fan groups, Zabranjeni, were congregated.

As half time arrived I made my way to the club shop to buy a hat and to thaw out my body. Despite the red hot atmosphere, it was the coldest I had ever felt at a football match. Meanwhile, down on the pitch, most of the Partizan players shivered in their dugout having seen their path to the tunnel blocked by a cascade of flares thrown by Delje.

With no let-up in the atmosphere, the game drifted somewhat during the second half. The real quality was with the fans. A huge red and white flag covered much of the North Stand – those not under the flag held aloft flags. As Delje started up a rendition of Od rođenja mog, many fans around me passionately joined in, some with tears in their eyes.

That love song to Zvezda, with the translated words of:

Ever since my birth,
there hasn’t been a day without your name,
not a day, not a year,
Red Star.
Only with you,
will I remain forever,
Red Star.

It was meant to stir their red and white heroes on to victory. Yet it was Partizan who would go on and break Zvezda hearts. 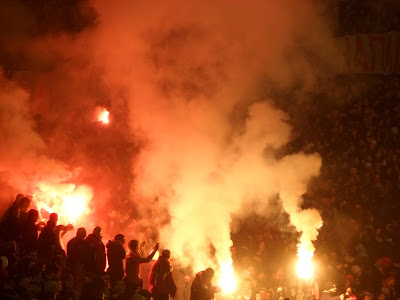 Anyone got a light? 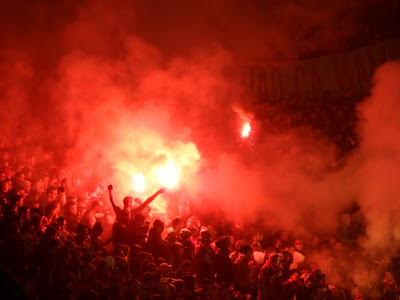 With twenty minutes remaining, Zvonimir Vukić beat two defenders and fizzed in a low shot to break the deadlock. Then Marko Šćepović collected a long through ball and, having raced beyond his marker, slotted past the home ‘keeper to send the South Stand into raptures. Ken and Chris, who were in the West Stand but down near the South Stand, standing amongst a mixture of home and away fans, observed later than as Partizan celebrated they thought fights were going to break out around them; the moment passed without violence.

As the final whistle attempted to pierce the noise of the crowd, both the North and South Stands were still in full voice, the air around the stadium was that of dejection; similar to at a party that has quickly, and unexpectedly, run out of booze. We headed back to the centre of Belgrade to join the Saturday night revellers in the Three Carrots pub. As the other lads left late on to go to the airport, I left for the hostel, ready for another three days in the city.

I spent a lot of time talking to Zvezda fans during those days. The inevitable question would arrive immediately after they found out I had been to Marakana: “So, who do you support?” It was a question I had heard many times since my arrival; every stranger who met each other, whether they were both Serbs or Serb and English, had asked the other person that. By the end of my first pint after the match I had perfected a confident answer; the confidence growing not just as a result of the impression left on me by the Marakana support, but by the derby hurt glowing in the eyes of the person talking to me. “I’m Zvezda, who do you support?” A grin would sweep across the face before the reply: “Zvezda! Me too. We’re the best team. What did you think of our supporters?”

One Zvezda fan summed up their feelings of what makes the Eternal Derby so special: “The Belgrade derby is a world phenomenon. The standard of football is low but everything else is top class. That’s why it’s the biggest. We have the best atmosphere; the loudest chanting; the most tension, switching between love and hate”.

Sunday resembled one huge hangover, not just in my head but also across the city. Shoppers shuffled along the street looking down; coffee shop couple talked in hushed tones; the Red Star Belgrade fans, numbering many more than Partizan, were hurting. I passed through the usual sights during those days and spent time at a newspaper that produced a profile on me and my observations of the derby. Talk was already of the return fixture and revenge, though by the time it rolls around, Partizan could have secured a sixth successive title. Whatever happens over the course of the season, the greatest atmosphere at any football match in Europe will be in Belgrade, screaming from both the North and the South Stands. 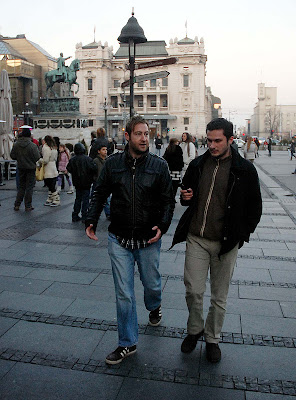 I'll chuck in a few Serbian dinar if you hold both clubs scarves aloft.... 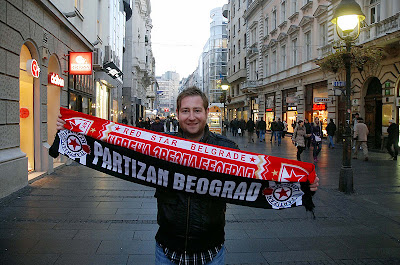 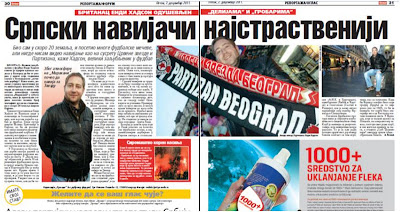 Aye lad. #DoublePageSpread
Follow both Andy Hudson and European Football Weekends on Twitter
For more of Andy's work head HERE or indeed THERE
Like this? Nick Coppack was at The Eternal Derby last season.
Posted by Danny Last at 10:34

There are loads more photos and videos from this match over on Ultras-Tifo: