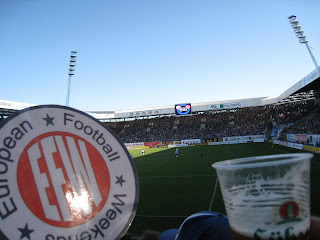 - click photos to enlarge image -
So here is the deal: 16 English lads travel out to Berlin for a weekend of mirth and hilarity. 5 of whom are addicted to European Football Weekends and as such decide to travel a day early in the hope of catching a game on the Friday evening. EFW member Christian Mrosk says his club FC Hansa Rostock are at home to FC Kaiserslautern in an all important 'top v bottom' encounter and before you can say 'nice floodlights' we - Fordy, Greeno, Nick, Big Deaks and I - were sitting on the train from Berlin to Rostock to meet Christian for a pre-match beer. Happy days no!?.

The train journey 2 and a bit hours into the north of Germany was wonderfully scenic. We'd procured ourselves 'Lander' train tickets which meant the five of us only paid around £10 each. German trains - or mobile pubs as we like to call them - are a wonderful beast. They're cheap, efficient and on this occasion contained a crate of 20 cold beers to enjoy en route.

All was peace and love until the train pulled into Neustrelitz. Here a large group of German police officers dressed in green stormtrooper outfits and ridiculously over sized helmets along with - for the want of a better phrase - a mob of Rostock lads joined the train. Our new friends Bernd and Martina (whom we'd met three minutes earlier) assured us everything was hunky dory and so it proved. Onto Rostock everybody, hey ho, let's go.

We arrived in very good time for the match and so headed through the City on a tram up to the Brauhaus Trotzenburg next to the zoo. With it being hotter than Greece, more cold beers were called for. We were in the correct place for doing just this as the pub brewed many of its own beers which were rather splendid. We met up with Christian who turned out (as usual) to be a top chap and he joined us as we made our way to the big match live.

En route to the ground, we saw a group of BFC Dynamo fans heading into the woods dressed in their own club colours. Christian told us that this was probably to met up with some FC Hansa fans for a 'bit of a chat'. All a bit unsavoury, rather like the mackerel rolls that were on offer at the stadium. No thanks Maureen. 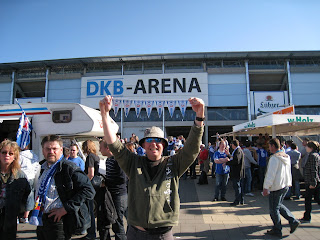 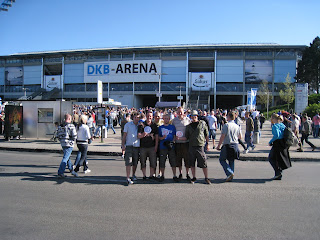 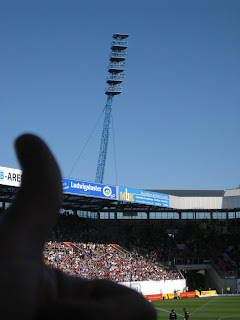 Thumbs up for the floodlights. 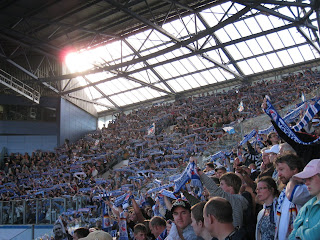 Every scarf a winner. 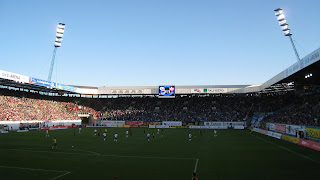 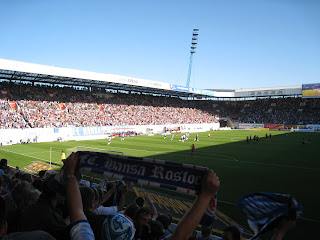 Inside the ground a huge atmosphere was building. Unusually, in recent times anyway, FC Hansa had sold all 27,000 tickets for this match. This was up 10,000 on their last few home games. There were four bits of terracing in each corner, one of which housed the 800 or so away fans. Hansa Rostock were deep in relegation trouble and needed a win big time, whilst Kaiserslautern required the points in their quest for automatic promotion back to the Bundesliga.

With FA Cup Final type hysteria in the stands the game kicked off. Then the goals starting coming and happily kept coming. Mario started things off by 'Fillinger' his boots - or in this instance his head - twice with the opening two goals for Hansa. Nothing funny in the fact that AmeDICK replied with a quickie for the away side or that they also had another player called DICK who picked up a yellow card later in proceedings.

In the second half Hansa scored two more headed goals and another standard one with the boot. So that was four headed goals in a row for them which we decided was a world record. In between the goals, Greeno was relentless in his pursuit to get us all drunk and made countless trips to the bar. With this being Germany, of course you're allowed to drink in your seat. In fact they encourage you to do so. 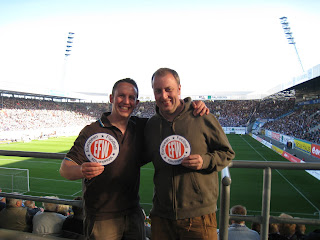 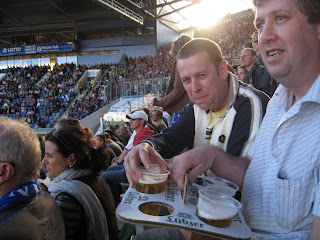 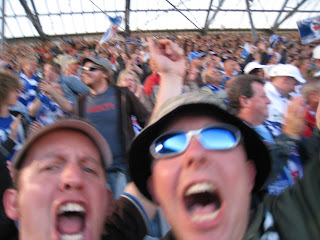 The goals start to fly in. EFW team (Danny and Nick) mildly pleased with events. 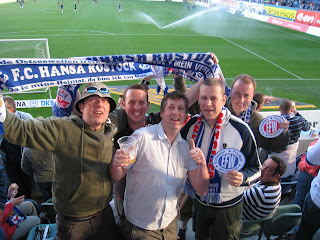 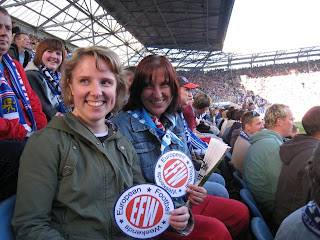 Hansa cross Europe. Smiling faces all round as the EFW brand reaches Rostock.
The travelling fans sang their hearts out and waved their flags for 90 minutes despite being on the end of an absolute thumping. That's the difference in Germany. Pretty much everyone in the stands gives it their all for 90 minutes and treats every game as if it's their last. And with a sausage to roll ratio of 2.7 in our favour - really, what's not to like!?

With a spring very much in our step we headed back to Rostock station feeling rather pleased with ourselves. An EFW logo was planted on the train station signage for good measure and fears of overbeering proved unfounded as we purchased another crate of 20 for the journey home to Berlin. A train journey late into the night with happy, singing German fans wanting to befriend you isn't a bad way to spend an evening. Also, you know it's been a good night out when you wake up the next morning still wearing your newly acquired 'HANSA FOREVER' scarf which someone gave you on said train. Good old Germany. It ticks every box, every time. Prost! 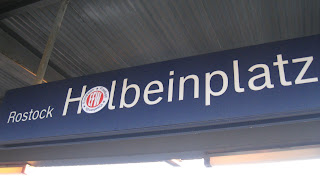 Splendidly placed logo back at the station. 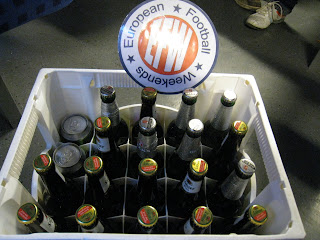 Thirsty old work this getting the train business. 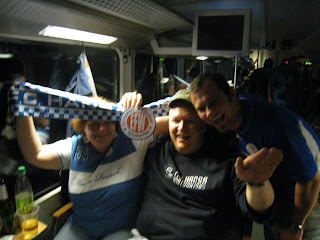 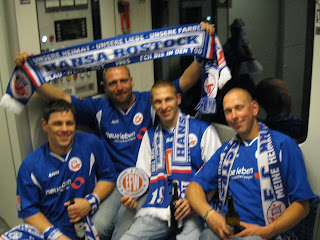 More new mates on the train home.
Posted by Danny Last at 10:37

The notorious train to Rostock... The reason why you were joined by the Old Bill on the train is probably based on the fact that a group of SC Freiburg supporters were assaulted and robbed on their away trip earlier this season.

actually the fans of hansa rostock are one of the loudest and most enthusiastic crowds in germany, on the other hand they have kind of a violent attitude. they're playin with the clischee all the time, shouting "hooligans, hooligans" in an ironic way and they'll never be friends with the police.
its the most likeable or pleasant fans in germany, in my opinion!

nice report, keep it on!

Thanks for the comments lads!

I can only speak as I find and to that end, I have to say that the fans of Hansa Rostock are definately some of the best in terms of noise and atmosphere that I've encountered on my travels.

I've seen them twice now, at this match obviously and also away to Kickers Offenbach whereby they took 2,000 away fans to a match eight hours or so from Rostock on a Sunday afternoon. Fantastic effort.