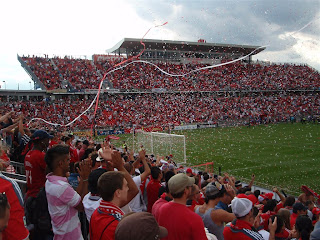 Oh Canada!
Toronto FC 2 Chivas USA 1 (07:08:10)
1860 Munich fan Michael Stoffl travels the globe watching football and generally living the dream. His latest pit-stop was in Toronto, Canada where he saw Toronto FC - the only Canadian team playing in the MLS:
I recently stopped over in Toronto when the TFC played at home. So rather than going to the mall or take a look down from CN Tower - for a mere $22, I decided to spend my Saturday afternoon watching football and drinking beer.
After some basic research before the game, I got in touch with a number of supporters from a group called the "U-Sector". I received a very friendly welcome, they got me a ticket for my preferred section (cheapest available plus best atmosphere), and invited me to their pre-match bar before the game to boot. So, what's not to like? 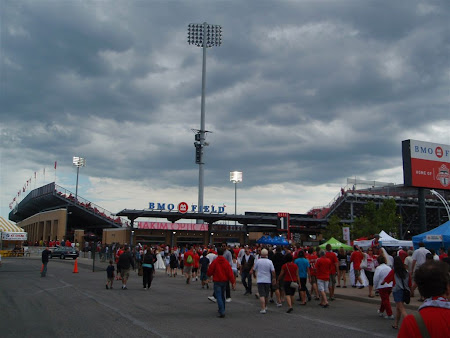 Pitchers at Maro were only $12 (a bargain in Canada, and unlike south of the border they know how to do beer), only a 10-minute walk to the the ground, and the atmosphere was buzzing when we arrived - not really what I expected before going to my first soccer match in Canada. Incidentally, I noticed that many people I met in Toronto actually refer to the sport as football, not soccer.
I must have been one of the few not wearing red that day. Confetti and ticker tape all over the place, everyone standing on the seats behind the goal, and all accentuated by some decent chants and singing.
Gary Russell of the U-Sector was kind enough to answer a few questions I had:
What is the U-Sector? And where does that name come bearing in mind you congregate in section 113? U-Sector is a supporters' group founded in 2000, and pre-dates the existence of Toronto FC and BMO Field. Members supported a lower league team and the Canadian National team at the old Varsity stadium and met in Section U (the sections were alphabetical instead of numeric). That was before my time, but some of those founders remain active in U-Sector. 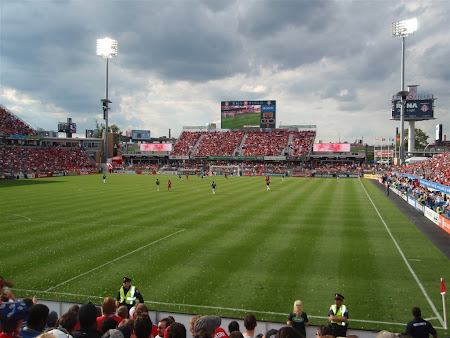 How many fans turn up for matches BMO Field? And how does this compare with other sports in town such as hockey or baseball? BMO Field's capacity was 20,500 when it opened in 2007, and was expanded last year to 21,800. Attendance is usually announced
somewhere between 20 and 21 thousand. This is about the same capacity as the hockey arena. The baseball stadium holds just shy of 50,000, but they have struggled for attendance in recent years, and they are also averaging about 20,000.
How much is a match ticket at TFC, and how many are taken up by sponsors, hospitality, etc.? Tickets range from $26 in the supporters' sections to $120 in the "club" seats. Most of the tickets are in the hands of fans, which makes for a better atmosphere. The club does have premium box suites it sells to corporations.
What is the greatest moment in the history of TFC? Speaking of history, how long has the club been around? This is the fourth season of TFC's existence. We're a very new team, the first top-level professional football team in Toronto since 1984 when the NASL folded. As a result, this club is making history every season. Our iconic moment was when Danny Dichio (former QPR, Sampdoria player) scored the first TFC goal at BMO Field on May 12, 2007. Since then, the club has won two Canadian championships and this summer qualified for the group stages of the CONCACAF Champions League for the first time. Our first Canadian championship, the Miracle in Montreal, when the team needed 5 goals on aggregate to win the trophy and won 6-1, is probably the highlight so far. 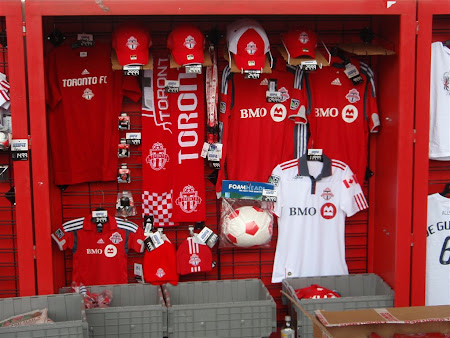 I noticed at least three separate 'singing sections' at the stadium. What is your relation to those other supporter groups? Each of the groups has their own way of doing things, but we have often cooperated on displays in the past. Our capos consult on songs and chants with our near neighbours, the Red Patch Boys in section 112, and of course, we all look out for each other on away trips.
Who are the TFC's biggest rivals? And do you share any friendships with other teams/supporters? Geography is a big issue. Our real biggest rivals aren't even in the
same league with us yet. Montreal Impact are in the league below us, they are our nearest Canadian rivals, but will be joining MLS in 2012. We have contact with supporters' groups from some of the American clubs, but because of the distances, there isn't much of an away travelling culture in MLS. Except for our fans, of course, and we're still new.
I assume you're following football in the motherland and across Europe. Do TFC fans have a favourite other club or league? I'm a Hearts supporter. You met a Hertha fan, a Feyenoord fan, an Allianza Lima fan -- people here also support clubs from all over, the
places that they or their families are from. We have many fans of the big European leagues. As there are a lot of Liverpool supporters attached to TFC, and because the club wears Red, I think it is fair to say a lot of our chants are modelled on Liverpool chants. But we're always open to new songs and new ideas from anywhere. 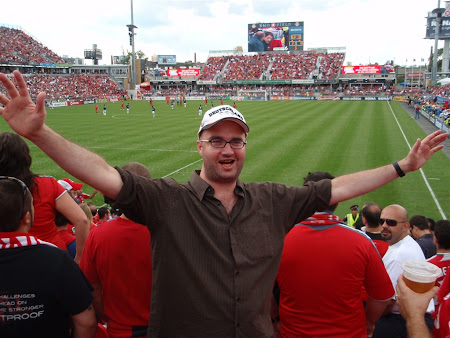 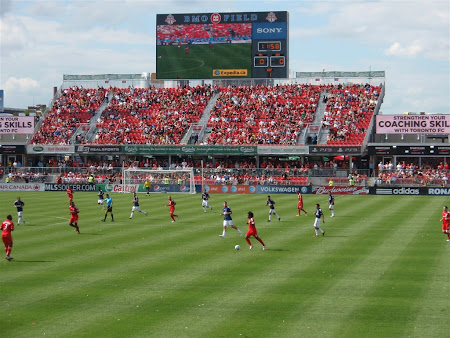 With Columbus/Ohio being the shortest away trip at 500 miles, how many people actually follow the team away? We took 2000+ fans to Columbus one year, so the potential is there. We've had very good trips to New England, New York, Chicago, in spite
of the distances. There's only so much you can do when other teams in your league, like Los Angeles, are 3500 km away. All of our away games will have a small core of away support, whatever the obstacles.
I hear you're doing well in the CONCACAF's Champions League this season. After overcoming mighty Motagua of Honduras, you're now facing Cruz Azul from Mexico. What does this competition mean to you? It's hugely important, not only because we want to compete against the best teams on our continent, but because we need to raise the profile of our club. We have a very strong ownership group (TFC's owners also run the NHL Maple Leafs and the NBA Raptors), we have a good little stadium with an excellent atmosphere. Now we need to have success as a club and spread the name, so that we can attract players to take the team further. We think Toronto is a great city to live in, and we want
top players to want to come and play here.
What's the press coverage like in the local newspapers? I didn't find anything on soccer in this Saturday's 'The Globe and The Mail'. I might have overlooked it though in case there were a couple of lines. It is usually very good. There is a crust of old journos here who resent football and wanted it to fail, because they are invested in the established sports, but the media outlets aren't able to ignore the success of the football club among Torontonians. We get good coverage from all the major outlets, including the CBC, the national television network. Of course, the club is well-positioned on the web. 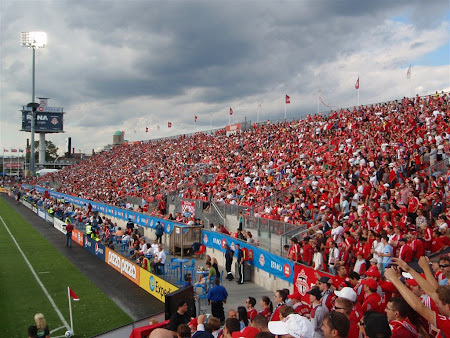 I learned a new acronym today: DP, which is short for 'designated player'. But what does it mean? Major League Soccer is a salary cap league. Each club is allowed a
maximum of 2.55 million dollars per season for the whole team's salary. In bigger leagues, that can easily be one player's salary. The idea is to control costs and to keep the league competitive, no one team can spend their way to success by bringing in a roster of expensive players. However, there is an escape clause -- the designated player. This is where David Beckham and Thierry Henry come in. Each club can have two players (and can buy the right to a third) for whom only $415,000 counts against the team's salary for cap purposes. The rest is paid by the team to the player directly. Toronto's DPs are the Canadian international (and local boy) Julian de Guzman, and the former Spanish international Mista, both of whom are former players from Deportivo La Coruna in Spain.
We do like a beer with our football here in Europe. And I was surprised to see 24 oz. cups of Carlsberg being sold at the stadium (that's 1.5 pints or 0.71 litres) that you are allowed to drink in the stand. But what is the beer of choice for the locals? There is a lot of variety. Toronto is a great place for microbrew or craft beer. Most fans buy their beer for the price! The stadium has an arrangement with Carlsberg, and it is great that we get to drink beer in the stands.
Now, tell me why the U-Sector meet up at a fancy nightclub - that opens its doors in the afternoon - rather than in a more appropriate old-fashioned pub or bar?
We had a suitable nearby pub where we used to meet and we were very happy there, but unfortunately, the owner became ill and died, and it closed. So we were stuck for a place to meet that was near the stadium and had the capacity to deal with a large loud group of thirsty supporters. Luckily for us, two of our members are friends with the owner of this club and they agreed to give us access on game days. It has been a very good situation for us, and I hope it has been good for them too. 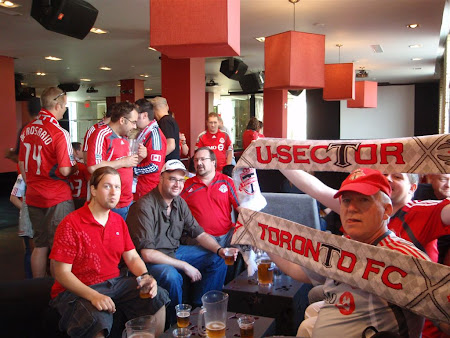 Stoffers in that fancy nightclub wishing he'd selected a little red number from his wardrobe.
I hope so, too. And I definitely enjoyed myself. Thanks for your time and the great hospitality!
Follow Toronto FC, U-Sector and EFW on Twitter.
- Feel free to comment below -
Posted by Danny Last at 23:31

It was fun sharing a drink with you. It seems you've enjoyed best atmosphere in Toronto. Hope you'll be back soon.
Perhaps it is worth mentioning that we chant in English and in French, so no, not all chants are modeled after Liver..pooh.

nice writeup - glad you enjoyed yout trip to the City.

Nice Blog .
atmospehere at BMO is ok but very forced and corny to some degree..
lots of hardworking supporters but most fans are sitting on hands and watching 112 go at it
it is what it is / fake footbal factory

You're right to a certain extent. However you have to understand that most of us in Toronto didn't grow up with football, and none of us grew up with this particular club. But a lot of us have experience supporting other clubs in more established football countries, and we try to re-create that experience here in Toronto. It does feel a bit forced at times, but it still makes for an enjoyable experience.

Great article, and I'm glad to hear you had a good time in Toronto.

Toronto FC still has a lot to go with regards to breaking into the mindset of the majority of Torontonians, but we're definitely turning heads now.

Props go to the guys from U-Sector for all their efforts.

Slightly off-topic, but can one of the Canadians visiting this page explain me if there are any football teams in the far north of Canada (even if only amateurs in a local league) ? Nunavut, NorthWest Territories, ... I am asking because a friend of mine lives in the Yukon very close to the arctic circle, and I would love to visit. A groundhoppìng there must be about the northernmost stadium I can think of ; if football is played at all there!