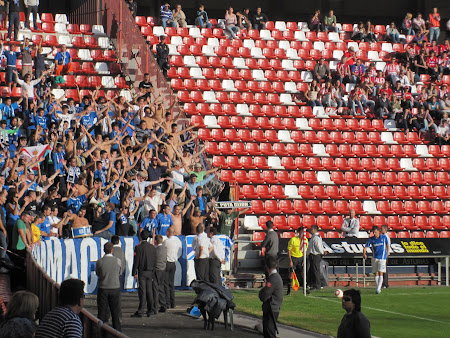 Segunda B or not to be?
Sporting Gijon B 0-0 Real Oviedo (26:09:10)
Planning any football trip to Spain from abroad is of course a logistical nightmare. Matches in the top two divisions are only pinned down to a day and kick off time 10 (ten) days beforehand. And if its games lower down the football pyramid you're after seeing, then just 5 (five) days prior notice is given. I can only conclude that the wine and nibbles at the Spanish FA must be so good, the men in suits like to assemble every seven days, no less.

Gathering any information is another minefield. And don't for un minuto think several daily football newspapers will help. Yes, of course up to ten photos of Jose Mourinho and CR7, but no danger of any actual dates and kick off times for anything below Xerez in Segunda Division. And if you do support Xerez - don't hold your breath - you'll get two lines at most.

Anyway, enough of the ranting. Despite this debatable debarcle throwing up the odd Monday night nightmare - it can occasionally land you with a jackpot. So it was then that 24 hours after watching Sporting Gijon tackle Valencia in La Liga, I was back at El Molinon for this Asturian local derby between two teams that - lets be honest - don't like each other very much.

Normally, Sporting Gijon B play their games in the 3,000 capacity Instalaciones de Mareo, he said checking his new Spanish bible the Guia de la Liga 2010-11 - comfortably the best €4 I've ever spent. However, with this match deemed to be Grade A - or whatever mark is attached to a fixture that gets hooligans excited - it was switched (at the last minute obviously) to El Molinon. 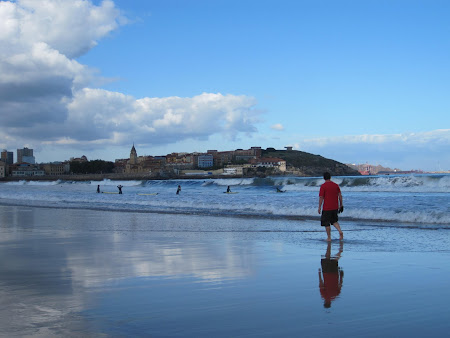 You'll never walk alone? The approach to El Molinon along the Playa de San Lorenzo is surely one of the best in football. 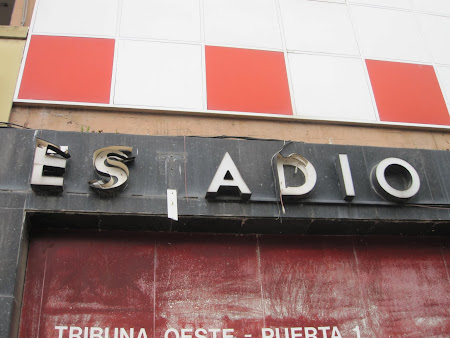 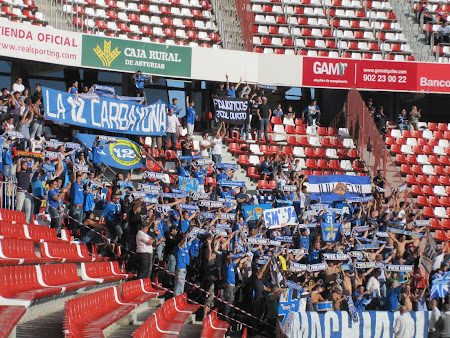 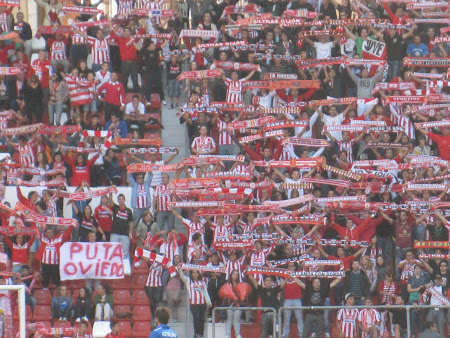 Puta Oviedo.
These are dark days for Real Oviedo. A few days before this derby they were beaten 1-0 at home to Mirandes. They didn't have a single shot on target. Worst still, only 4000 fans turned up in a stadium that holds over 30,000, and that was with an offer of free tickets to friends of season ticket holders. What must Sid Lowe - their most famous fan - be making of all this?

Hang on a minute, talking of Sid Lowe, he was very much the talk of the town between the Sporting Gijon fans and I prior to this match. Sid is really well respected in Gijon and this article goes a long way to explaining why he is in the running for the key to Gijon, and that despite his allegiances lying 15 minutes down the road in Oviedo. Sid was at this fixture last season, but sadly he couldn't make it for this one.

The older fans of Sporting Gijon prefer to talk about Real Madrid as being the main rivals. Talk to any younger fan though, and its Real Oviedo that brings them to the boil.

Sadly, only 200 away fans bothered with the short journey north. They were bused in and out with the minimum of fuss. Aside from a destroyed toilet block in the Grada Norte, the match passed of without incident despite a fractious build up of tension beforehand - mainly in the local media. Futbol, canticos y sin incidentes que lamentar (Football, singing and no incidents to report) declared La Nueva España the following morning.

With this being Gijon, I started the day with a stroll along the Playa de San Lorenzo and sat down for a hearty lunch with the wife before meeting up with the local fans. You can throw away the Lonely Planet guide in this town. Its foodie heaven, and you simply can't go wrong. All-sorts of fish, bull and horse (horse) meat, strong local cheeses and ciders were all downed in La Tabacalera and El Requexo respectively.

First impressions as you pitch up at El Molinon aren't too favourable. Currently - from the outside - it looks like a building site. In fairness, this is Spain's oldest stadium, and rather than move. they're renovating parts of it bit by bit. The temporary ticket office (actually a tent) and the club shop (actually closed) are set aside over the road from the ground. Inside, its a perfect fusion of red and white seats, there's no running track and the acoustics are spot on. It gets very loud when the fans get going, and boy do they get going - for the whole game.

Your probably wondering why I've rattled on for the thick end of a thousand words without mentioning the actual game. That's because there wasn't much to talk about. The fans were of course brilliant. I sat next to the Real Oviedo supporters who - despite being few in number - were fantastic. The home fans raised their voices in response, and if anything the atmosphere here was better than the previous days La Liga match. 6103 was the official crowd. It sounded more like 61000. 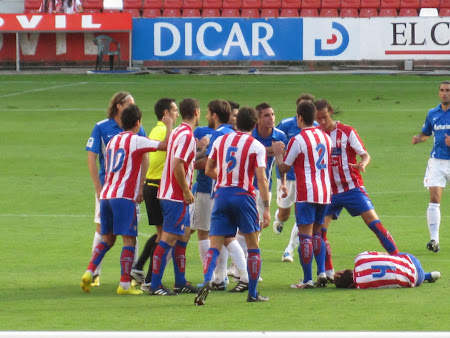 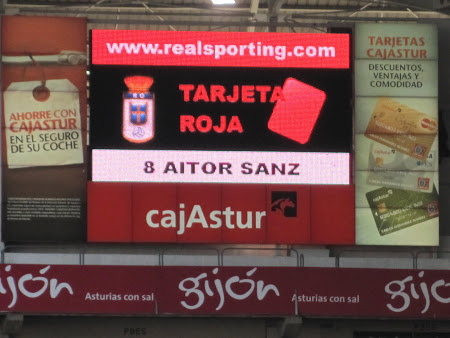 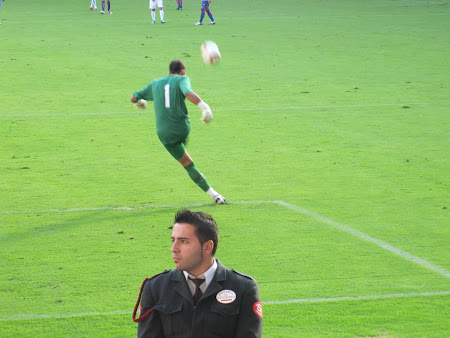 Gavin Henson had a good view of the match. 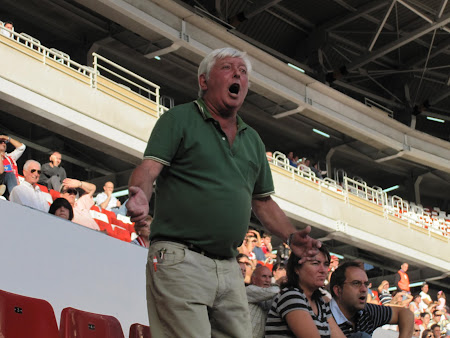 Yeees! Pechu was back back back. See previous report from the Sporting Gijon v Valencia for more on this legend. Apparently, he has his own Facebook appreciation society. I'm signing up for that and no mistake.
The main talking point was the red card issued to Oviedo's Aitor Sanz in the first half. It was a very soft dismissal for a push, and that ruined the game as a spectacle from thereon in. Aerbitro mamon is the phrase you're looking for I believe. The most pressing issue for the Sporting fans afterwards though was the fact that they all have to lose weight. Why? Because their shirt manufacturers will be Kappa next season. They're not very forgiving on those with a slight problem in the belly department. And every Sporting Gijon fan wears their colours on match days. Chorizo sales are set to dip accordingly.

What else? Ah, yes. Note to those who spin the wheels of steel on a match-day in the stadium: We football fans DO NOT want to hear Black Eyed Peas version of I gotta feeling at every single match we attend. That song is the curse of mod€rn football. Give me strength, or better still, pass me another bottle of that local Asturian cider. After a few of those you'll be swinging a fast shoe to anything - aside from the Black Eyed Sodding Peas obviously.

So that was the end to my Spanish footballing marathon. Four live games spread out over three weekends and I loved every single minute - as you might have gathered. I'd seen Sporting Gijon first and second teams in action, and they'd scored a total of nil goals between them, nada. But, I came away loving and embracing the club. If you want to sit in silence at the Bernabeu watching football, that's fine. If you want passion, a riot of colour and deafening noise with your football then choose El Molinon, choose Sporting Gijon. 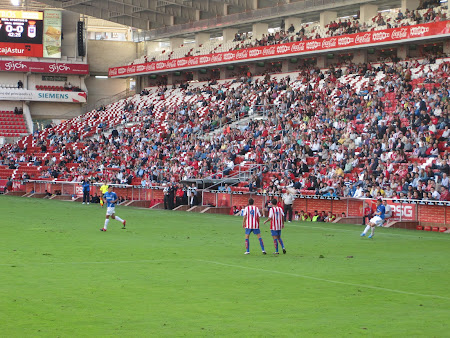 Is this the longest team bench in football? It spreads the whole length of the pitch. 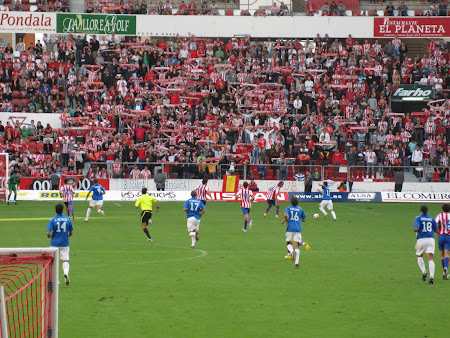 Ahora mas que nunca (now more than ever) we are Sporting. 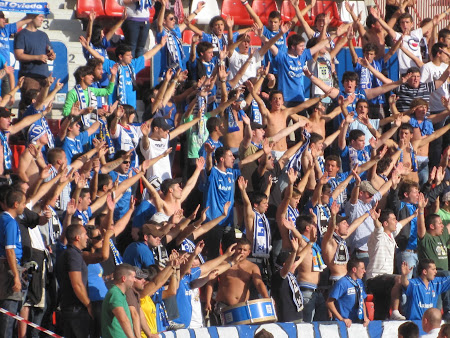 Wow, there is some derby passion over there (for a third level match).

" And if you do support Xerez - don't hold your breath - you'll get two lines at most."

Thats me then, well BHA & Xerez! You should join us in November for our trip to Betis.

@FootballFrans - Cheers pal. There certainly won't be a better atmosphere in the Segunda B this season.

@Tomysupercup - Sounds good. Can you drop me a private email please mate.

Really enjoyed your articles on Gijon. Nice work Danny. Would love to vist them one day.