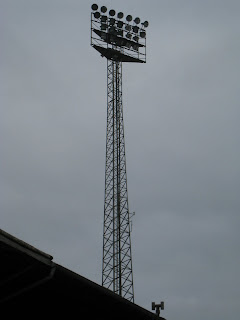 Crate day out for the Royal Family

The only sensible way to recover from the previous night appeared to be to carry on as if calories were going out of fashion. After a shipment of Belgian waffles were dispatched with ease, it was time to board a Royal Antwerp supporters coach which would take us (1hr) over to the away game with OH Leuven.

Before boarding said coach we had 40 minutes to kill. Roland asked us if we would like to go on the pitch at the Bosuilstadion home to Royal Antwerp and then have a quick beer? 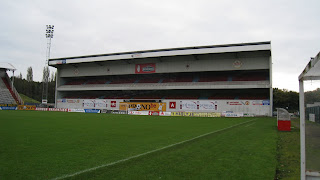 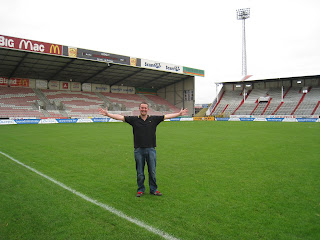 Upon boarding the coach, I noticed out of the corner of my eye a chap who would later become known as 'Danny the beer' loading on five crates of amber nectar. It seemed a bit excessive for such a short journey surely!?

As we pulled out of the local pub car park and onwards to Leuven, everybody was remarkably well behaved.....for five minutes. Then out came the beers and subsequently the songs and the carnival that is a Royal Antwerp away game had officially begun. 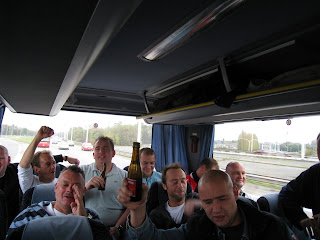 A shade more famous than the football team in the university town of Leuven is the brewery or moreover the beer that it produces. It's home to Stella Artois. Next time you drink one, take at look at the can and sure as eggs are eggs 'Leuven' will be emblazoned across the middle.

It would of course been extremely rude of us not to walk across the road from the 'Den Dreef' Stadium and sample a drop of the old Artois. So along with around 1,300 or so other away fans we choose to do just that - cheers!

After high fiving the undercover policemen (who everybody knew) outside the pub - who were keeping a check on the Stone Island boys - it was onto the big match live. 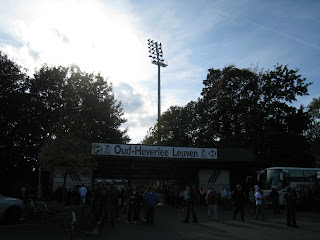 The match itself marked the opening of two new stands at either end of the ground. These appeared to have been purchased from the local IKEA and thrown together that morning. Still, our stand had a roof and that helped in producing a great atmosphere from the travelling hordes in our section. Incidentally 90% of the songs sung were in English including some old classics that had us loosening our vocal chords and stomping our feet. 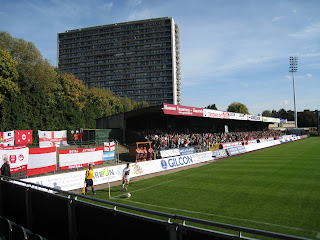 Yes, you can see into the ground from the flats. 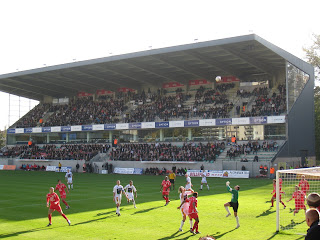 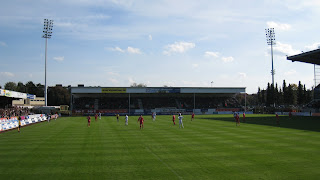 Similar to the game in Den Haag on the Friday night, nothing worthy of note happened for the first 60 minutes. Then Royal Antwerp turned the screw. The opening goal was greeted with scenes of bedlam around us. The second in the last minute produced one of the highlights of the weekend. Big Bas Vervaeke popped one in the net, pulled his shirt over his head and ran straight towards me. I ran down the stand - celebrating more than anyone, as usual - and met him down the front for a welcome cuddle. A huge bundle ensued. As I got up I realised that the usually mild mannered 'PNE' Martin had come down for a surf on my back as well. It's not often we get the chance - more high fives and cheesy grins all round. 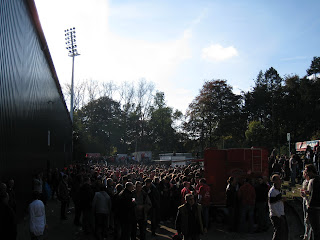 Royal Antwerp fans queue up for a half time Stella Artois.
Back on the coach, outstanding levels of drunkenness had been achieved by some of the fans. One would have thought it almost impossible to get quite so inebriated in such a relatively short space of time but they had clearly given it their best shot. Songs - somewhat less tuneful than before - were aired all the way home to Antwerp.

We said our goodbyes to our 52 new friends on the coach and to Roland and his brother Patrick who had enhanced our weekend fantastically with both their company and generosity.

Our request to find a beer under 5.2% in Belgium had proved unsuccessful. We used every last ounce of energy we had to knock back a few more Jupiler beers (5.2% - doh) on the Euro Star back. The beers giggles were soon out in force again as sitting opposite us was a trainspotter who with his stop watch was timing everything from station stopping times to tunnel runs. We could hardly complain though could we having spent most of the past three days admiring Dutch and Belgian floodlights. 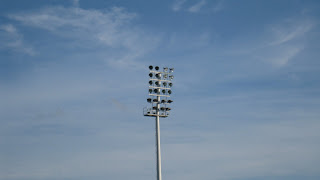 it's nice that somebody crossing the channel and also visit a match in the second division of belgium!!!(respect)
good knowing that THE football is playing in england!even 1st 2nd and 3th division is more interesting to watch!(exept in antwerp haha)

RESPECT! That's all I've got to say!

I hope you enjoyed your visit in Deurne and of course at the stadium, "De Bosuil".
You were lucky to come that weekend, to see the outgame of Royal Antwerp Football Club,with the new stand, otherwise you had to see the match from a further distance. It used to be a stand, about 25m from the field in the construction of a bow, without a roof.
So the atmosphere was a lot better.

It's a pitty it wasn't a homegame, because otherwise you might get the wellknown virus. I mean, when you get for the first time into the stadium, with a homegame, you want to come back...(you know what I mean I suppose ;))

Thanks a lot to come over and next time, you come over to Antwerp, please see a homegame and let me know. You'll be welcome.

This is my e-mailadress: l.b.kriek@compaqnet.be