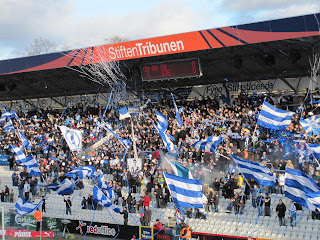 A Scandinavian trilogy of football matches in Denmark and Sweden as guests of The Ball is Round was simply too good to resist for EFW. We'd be based in Copenhagen and take trips out to Odense on Saturday, over to Sweden on the ferry to Helsinborgs on Sunday morning before the pierce de resistance; the FC Copenhagen v Brondby local derby, which is the biggest game in Danish football. It didn't take too long to accept the invite.

Copenhagen looked a picture as Stuart showed us the sights of the place he calls home for three days a week. Big Deaks and I began the harsh realities of coming to terms with the infamous Nordic beer prices. Lets put this to bed early doors then; in the centre of town a pint costs 50 Danish Kr which is 6 (6!) of your English pounds. Step a shoe slightly out of the tourist boundaries however and you pay half that. You do have the option of around twelve thousand 7-Eleven shops - which sell cheep beer - if you're really desperate.

The train to Odense normally takes around 90 minutes and set us back another 35 quid. Luckily, OB were all about European Football Weekends & TBIR and as such they slipped the three of us press passes for the day. That was a gesture we could cope-enhagen with. Danish trains are pretty impressive aside from not being overly reliable. We had an unscheduled stop in Høje-Taastrup for 30 minutes but pah! We didn't care, we'd come prepared and had visited 7-Eleven for some desperately cheap beers. 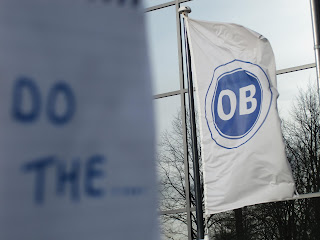 A cheap childish gag for which I apologise. 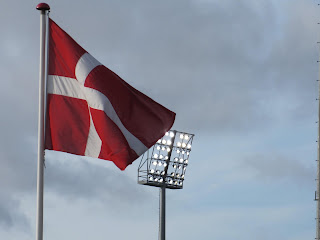 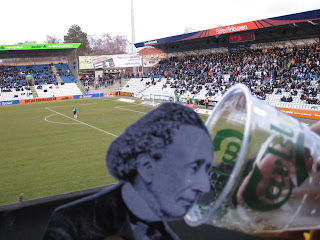 Poetry in motion. Hans Christian Andersen returns to his birthplace.
This was my first ever game in Denners (as it is not commonly known) and so presented me with my first chance to come to terms with some of the elongated team names. Odense Boldklub are known as OB. That I can deal with. Sønderjysk Elitesport on the other hand is a bit of a mouthful. We initially opted to rename them Sønderland, later reduced that to Sønders and the OB scoreboard operator was even lazier than us and simply plumped for SJE. OB v SJE it was then.

If it moves in Denmark, it'll probably be sponsored by Carlsberg. I like to think I'm not a victim of advertising but as they let us take beers into the press box, I shipped a few in for good measure. Another wallet ouching moment at £5 a pop. After a mandatory minutes silence - which actually turned out to be a full on rendition of You'll Never Walk Alone rather than a mute minute - we were underway.

A quick glance through the OB team sheet threw up some familiar names. Their gaffer is Lars Olsen, who captained Denners to their shock 1992 European Championship win. They've also got ex-Man Utd, Derby and West Ham keeper Roy Carroll between the sticks and talking of Ex-Man Utd players, wasn't that Eric Djemba-Djemba sporting the number 19 shirt? It was indeed. Carroll actually picked up the "Det Gylduebur" before the match, which turned out to be the "Danish keepers keeper of the Year". Check him out.

As we got underway, something wasn't quite right. SJE full back Micheal Stryger and visiting boss Michael Hemmingsen were sporting white gloves (white gloves!). Hemmingsen was also wearing jeans (jeans!), my letter of protest is in the post to FIFA as I type. As usual, I've asked for a points deduction. No football manger should wear jeans to a game. It is nothing short of a disgrace. White gloves are for snooker referee's like the late Len Ganley. 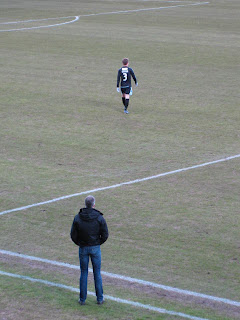 Hemmingsen tries to hide his gloves from us but Stryger's are in full view. 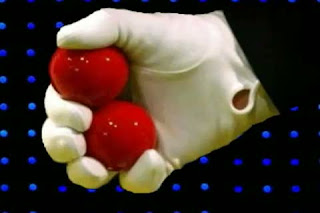 I managed to get a close up snap of them at HT though. 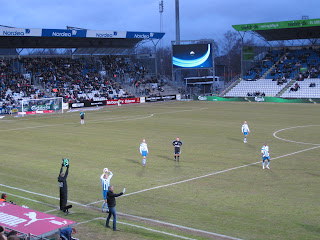 Away fans in the terrace on the far corner. Those gloves again on show. Tsk.
A goal apiece in the first half and some reasonable football kept our mind off the cold. It was freezing and some the crowd were covered in actual blankets - sponsored by Carlsberg of naturally. At half time we helped ourselves to some beef and gherkin sarnies in the press lounge before sniffing around for some free beer. I eventually found a fine source in one of the sponsors boxes. That kept us going for the second half which was scoreless. No goals but free beer. Every cloud and all that...

After the game we headed into the press conference. A moody Lars Olsen batted away some questions for a few minutes before an altogether more chipper Hemmingsen waltzed in - in those jeans. He happily chatted away to anyone who would listen. Apart from his obvious misdemeanours, he was actually a really nice bloke and clearly has a sense of humour. I'll give him a couple of FIFA stars just for making us laugh. 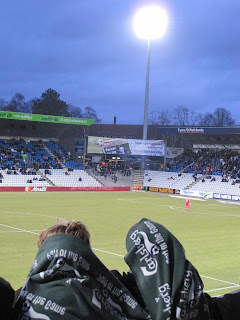 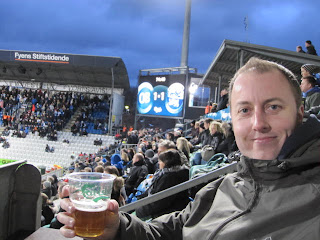 Big Deaks beavering away in the press box. 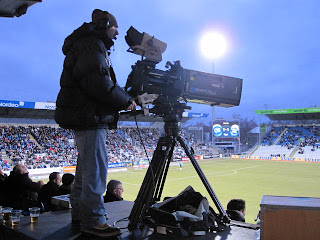 Even the camera man had three beers on the go (see bottom left). 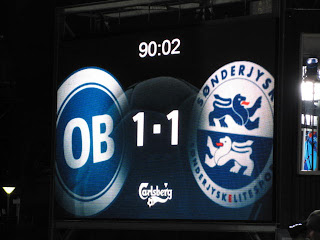 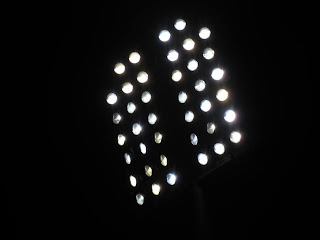 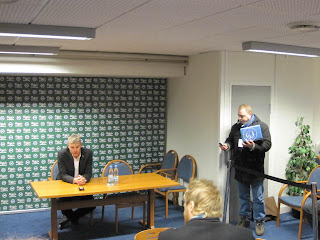 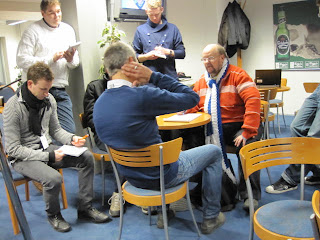 Hemmingsen faces the wrath of angry anti-jeans journalists.
We managed to corner Roy Carroll for an interview. Stuart did the questions because he's good at that. I just stood there like a lemon before asking him for a photo with the EFW logo. He refused. Bloody Manchester United Media Training School. I blame them. Actually, he was alright as well actually save (save!) for that moment. In summary, he said he was just happy to be playing, doesn't gamble anymore and is very content living in Odense.

With my professional hat on and purely for the interests of research, we ended up back in Copenhagen visiting as many pubs as was humanly possible. I'm just glad we didn't end up swinging a fast shoe to the Proclaimers at silly o'clock after a battleships worth of Carlsberg. Oh, we did. Good preparation for the next day - two games in two different countries on the same day. Yeeeees. Good old life. Cheers! 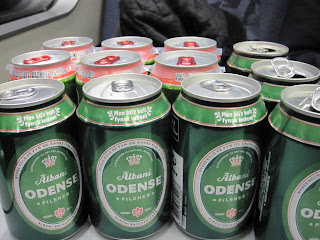 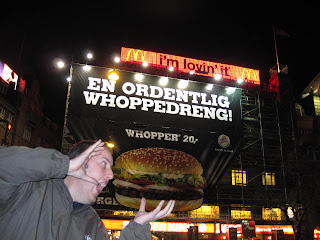 Big Deaks is lovin' it back in Copenhagen.

Very nice report. Given your obsession with the manager wearing jeans, I just can't wait to read what you have to say about Ken's (Brøndby's manager)shorts!

I actually didn't notice Ken's shorts during the derby. That is a shame. I can just about cope with a manager in a sports kit but definitely not jeans ;-)

Beautiful to read about the trilogy of football in Sweden and Denmark and also the pictures are great to watch, good post to share.

A goal apiece in the first half and some reasonable football kept our mind off the cold. It was freezing and some the crowd were covered in actual blankets - sponsored by Carlsberg of naturally.

hmm ;) I must appreciate you for the post you have shared. . I really like it. . thank you for sharing :)
UK Dissertation Help

This is a great work that you did,and it is really a great and superb pleasure to see some of the greatest and outstanding stuff that you share,so i will say thanks for sharing this great stuff.

This is my Good luck that I found your post which is according to my search and topic, I think you are a great blogger, thanks for helping me outta my problem..
Dissertation Introduction Writing

I had a great time reading your article and I found it interesting. This is such a beautiful topic that my friends are talking about. Thanks for this blog, we are enlightened. Very attractive photos
Dissertation Writing Service

how to write a dissertation said...

This article is very informative and useful for all of us. The article has been written very well. I appreciate your work. Thanks for posting.