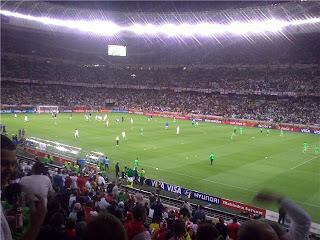 Stuart Mair is in South Africa with Fatboy Slim and friends. Here he continues with his World Cup Tour diary, this time from Cape Town where things take a turn for the surreal:
Cape Town is the business. I've been to lots of wonderful places in this last week but this city is just fantastic. Table Mountain overlooks your every move in this most cosmopolitan of cities. Indeed when I opened the curtains this morning, there was Table Mountain starring back at me. It's a bit like Sussex back home *blink* but without the lowering yourself into a cage with a great white shark bit.
Things took a turn for the surreal (or, get this cereal - Ed.) at breakfast yesterday. It was an ITV-fest. A who's who of footballing pundits. I give you Mr Jim Rosenthal, Mr Clive Tyldesley and Mr Andy Townsend. They may get a bit of stick back home but they were a thoroughly decent bunch and terrific company. Andy Townsend revealed his is a big EFW fan and I know he is one of Danny's favourites so this one is for him: 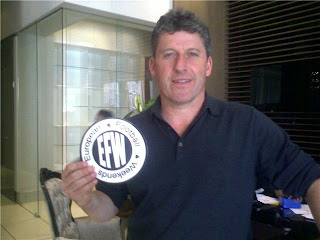 We love you to Andy! 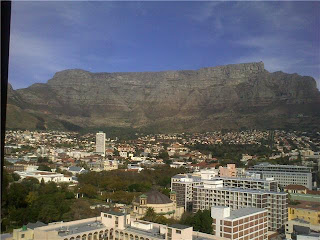 Good old Sussex by the Sea? Nope, it's the view from our hotel room.
Talking of exclusives: Clive Tyldseley told us that he has Norman's complete back catalogue and with that bombshell, the ITV crew were put on the guest list for the gig the following night. YouTube footage of Rosenthal, Tyldesley and Townsend swinging a fast shoe to Gangster Trippin' coming soon - possibly.
So with a spring in my step I entered the lobby today hoping for more banter with the ITV crew having worked on my punditry skills overnight but they were not to be seen. Not those cool cats but there were a couple of other chaps I noticed. It was only Peter Crouch and Glenn Johnson. They were in the restaurant after staying in our hotel over night. I didn't bother them though as I'm sure they had better things to do rather than be hassled by the likes of me.
So what have we done since I last wrote? Well I have done little but watch football when all around me has been a hive of activity with the full production team swinging into Cape Town for the Fatboy Slim show held after last nights game. I also accompanied Norman to a Radio 5 Live interview where Nicky Campbell asked "who are the burly chaps with you Norman?" oh, the shame.
Leaving for Stadium last night there was a real sense of anticipation and excitement to see Ing-gur-lund take on Algeria. We expected a routine three nil win with accompanying flag waving and all the trimmings and look what we got! Lets be honest it was poor, really poor but as the saying goes there are no easy games in International footba...*loses will to live*.
I will let the likes of my new ITV pals to analyse last nights performance but I will offer one view on last nights game. There were some England supporters that should have a long hard look at themselves this morning and ask themselves why they are here. I would like to offer each and everyone of them that booed at full time a dictionary where they can look up the definition of the word "support". (might be a good time to mention that there is a comments section underneath this article - Ed.) 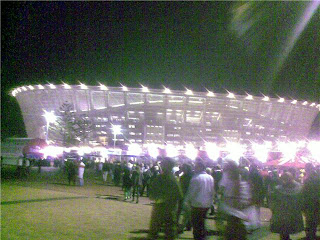 My trusty old Nokia produces another award winning photo. Outside the gargantuan Polo mint that is the superb Green Point Stadium in Cape Town. 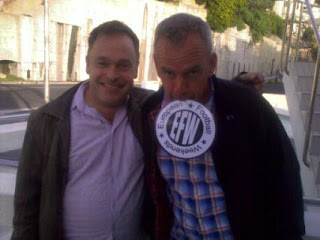 Brighton fans Al and Norman (eating the EFW logo)
After the game we all adjourned to the International Conference Centre where Norman played a terrific set, with full production, to a large and ecstatic crowd until about 3am. Not a single boo in the house!
We've got a day off today and so we're visiting one of the "Coaching for Hope" schemes that Mr Cook has been so involved in before driving to Plattenberg Bay along the Garden route. The next game for us is the England match in Port Elizabeth on Wednesday. Remember, lets stay positive. Come on England!
To be continued.......
- Feel free to comment below -
Posted by Danny Last at 14:40

stuart, we urgently require meat and water in room 1808...

Yes, come along Stuart. You're going to return back to Blighty a bigger star than 'Norbert' after this gig so don't forget your roots old chap.

me and the north korean boys are going to show england how its done today mr mair. if new zealand can do it against italy - with ex players from the likes of halifax town, AFC wimbledon, chester, crewe, havant and waterlooville and the mighty wycombe wanderers (ok i lied avout the last two) me and the north koreans are going to kick some portugese ass today.
not enough wycombe references in your blog either

Stuart, sort yourself out man.
People are waiting on your every word back in 'Blighty'.
Keep the flag flying, old chap and make sure you wash behind your ears...
pip pip come on 'ingerlund'

Stuart!!!! so your having a ball shame about the ingerland team!!!! You could do better and thats saying something!!!! LIZ xxxx

sorry about stuart's piss poor attention to his blog. he didn't realise you had to update it more than once a month.
to all you back home, stuart is having a lovely time in south africa,, though he did get a bit scared going fast on a fishing boat.

x the rest of the fat boy touring party