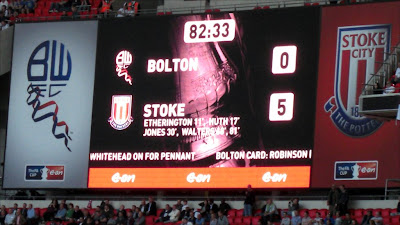 I really enjoyed reading that. I'm glad you ultimately enjoyed your day at Wembley and hopefully you enjoyed the way we (Stoke obviously) went about the game and some of the football we produced - several of the goals were undeniably of very high quality and our overall performance hopefully showed you as a neutral that we have to an extent moved on from the ruggedness we showed in the earliest years of our time in the Premier League.

All the best for Watford in the near future, and if you enjoyed the noise created by the Stoke fans, if you ever get the chance to go to a Premier League match at the Brit, take it.

A very good read. The whole day was amazing for me. The butterflies in the tummy on the way down, the atmosphere in the Green Man pub, the game itself, a totally unexpected miracle. We too thought this would be a very close game, far too close for me to even considering placing a bet (perhaps a little superstition in that too).

After leaving the ground, I looked at my mate, waiting for one of us to start the customary breakdown and analysis of the game, the usual debate of which one of our gladiators played the best and which the worst. There were no words forthcoming from either of us. We were literally speechless.

I'd like to know your thoughts on Stoke's performance. I don't know whether you've watched many of our games since we reached the Premiership, but it's fair to say that we have gained a certain reputation for the way we play. Did the game alter any of your pre-game expectations of the way we would play? Did it dispel any of the myths that media have carefully constructed about our players/tactics? Did any of our players stand out to you?

Last question, how do you rate our chances against Man City? Mancini's Man City haven't beaten us since January '09, but of course, come the 14th May that will mean nothing at all.

Thanks for the article.

Very nice piece. I like this slanted view on a subject & nb it's only to be expected for other fans to have mixed views on Stoke because, while we are specialists at unpleasantness and aggression, on the other hand and let's face it, we can turn in a second and are an unbeatable joyful lot when it comes to supporting our team and singing songs very very loudly indeed : )

Good write up that.

you are cordially invited to be a Stokie for the day on cup final day.
We will be lubricating our larynx in JJMoons Kingsbury if your not to busy pop along and join us.

A very good read, and how ridiculously different your experience would have been if your prize tickets had been situated on the other side of the halfway line.

Those days don't come around often (or ever) for supporters of teams such as ours. Sunday was the first time I've had to fight back tears in a football ground - and that was before the game kicked off. I think we all (fans, players, staff) wanted it so badly that nothing would stand in our way that day.

Alec, glad you enjoyed it.

With hindsight I regret not putting in a section about how well Stoke played. As you rightly point out, there was very little of the graceless football that the media suggest is your stock trade.

As a Watford fan you have my every sympathy - our football in the 80's was wrongly derided for being long ball, when in actuality people just didn't like a relatively new kid on the block upsetting the apple cart.

Stoke were a joy to watch and were as incisive and impressive as Bolton were lethargic and flat.

I can't help but feel Pennant and to a lesser degree Etherington don't hit those heights on an entirely regular basis, but there really is no denying it Stoke were as entertaining as they come.

Thanks for your kind words re: Watford - our fincances remain the primary cause for concern, so it's currently a case of fingers crossed at WD18.

Cheers and good luck in the Final!
Mike

It is rare that a sports article moved me in quite the way that your's did.

Having supported the Potters since the mid sixties I was delighted to be one of the faithful at the other end of the stadium.

A cracking summary from a neutral - thank you. It was very surreal and at half time most of us stood around stunned because we are so used to being the twelfth man to drag us back into a game. This time the tables were turned and the team gave us the display and result of our footballing lives. I so hope we can perform as well on the 14th of May.

I thought I was the only Stoke fan called Alec!

Anyway, I wish to dissociate myself from the remarks of Alec @ 1 - "we have to an extent moved on from the ruggedness we showed in the earliest years of our time in the Premier League" - by saying that a) we were never rugged, it's all a lie put about by people from Islington; b) so what if we were rugged? It's a rugged town. and c)We're Stoke and we'll play like we want!

As a Watford fan you'll have already had your own fun against Bolton at Wembley in the not too distant past! ;)

I was there, also in the Bolton end, a Wanderers supporter all my life.
Each and every one of us is struggling to come to terms with what we saw - especially after a season where we have played with such promise and energy and no little skill. We were an empty shell of a side and were abysmal - spoiling what had been a fantastic day until then for us.

Stoke were excellent and could have won by more - and aside from your chances in the Final - enjoy your European tour next season it'll create some unforgettable memories for your supporters as our UEFA Cup runs did for us.

Just to add some contrast to my fellow readers - Sunday was one of the worst days of my life!

Interesting is the defensiveness of the Stoke fans though about their style of play. They sing "We'll play how we want," but then spend a lot of time writing about how they play better stuff than people give them credit for, while Tuncay was a fans favourite.

For what it's worth I agree that sometimes they do get a raw deal from the press, but then at the same time Stoke are still a team which went about 2 months without scoring a goal from open play before the Newcastle game. Their use of the wingers seems to be more a direct running game than pretty foot-on-the-ball stuff from centre midfield - obviously it's working quite well!

What an awesome read mate.

I for one was surprised to see such a rout by Stoke as I was expecting Bolton to run away with the win.

There is still beauty in the FA cup, I for one hope that Stoke don't win the FA Cup so Liverpool get to be in Europe next year, but at the same time if we don't get in it could only mean good things with a fresher squad etc.

I'm 50-50 on this because as much as I hate City I am not really keen for us to miss out on the extra revenue of the Europa.

Sort of hard one for me