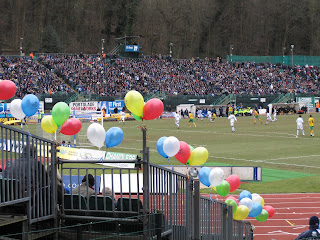 Withdean & I
Brighton 1-2 Norwich City (13:02:10)
- click on photos to enlarge image -
I've penned 168 articles since EFW found its sorry way onto the interweb a couple of seasons ago. You might find it a bit Ken Dodd that none of these have featured a Brighton home match at the Withdean Stadium because for 30 years - man and boy - they were the love of my life. So what happened I hear you drone before rolling your eyes into your collective sockets.

Withdean & I have had a love-hate relationship. I loved the club returning to Brighton after a couple of seasons of travelling to Gillingham for home matches. I loved beating Manners 6-0 on our first game back. I loved back to back promotions. I loved Micky Adams (first time round) and the Bobby (Zamora) years. I loved Paul Watson's free kicks and Daddy Cullip. Moreover, I loved meeting up with 15-20 mates before each home game for three hours of pre-match tomfoolery. 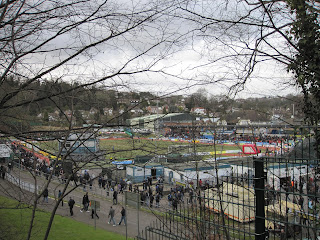 Welcome to the Theatre of Trees.
So what went wrong? Well, silly old me, I fell out of love with paying £450 for a season ticket. I could go on about the lack of atmosphere, the running track around the pitch, no roof, poor facilities, lack of beer, mediocre football and the like but the bottom line was the money. Three seasons ago I waved my little white flag, as did almost all of my other mates and we went our separate ways. I discovered European Football Weekends and became a Non-League football bore.

Having said that, *nod to Larry David* it doesn't take too much to get my Albion juices flowing again. I still attend the odd away game (see Yeovil & Southampton for details) and when we started reminiscing about the old days on these pages this week , a couple of phone calls were made and before you could say £26.50 a ticket, we were sinking a few ales prior to the visit of League One leaders Norwich City in HQ three hours before kick off - just like the old days. And relax.
Wives to the shops + lads to the football + meeting up again in the evening to celebrate our good work = (the last time I checked the EFW manual) a winning formula. So with the ladies happily spending our cash in town; Ju, Greeno, Binsy and a cast of tens got gooey eyed talking about our favourite subject - the old days - over a couple of bevingtons whilst watching our "friends" along the coast - Southampton v Portsmouth - do battle in the FA Cup Filth Round on the tellybox. 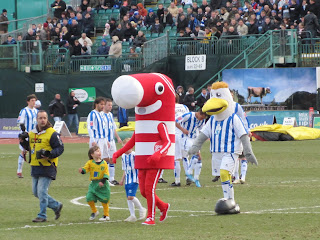 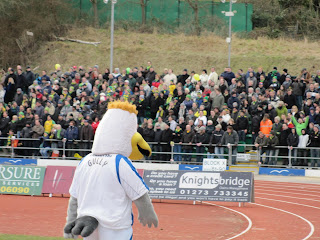 When the seagull follows the canaries. 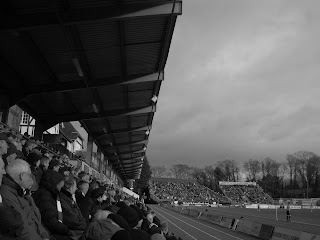 Stands up if you love Brighton. 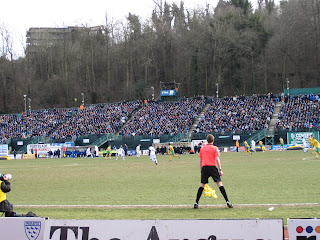 Trees are good, trees are good.
Only 894 Canaries were allowed to swoop down to Sussex due to space restrictions. I doff my cap to Norwich fans who travel in huge numbers and not just when they're top of the league either. I'm not sure how much of the game they actually saw because the away stand at Withdean is famously a country mile from the pitch.

The Albion fans were fairly mute throughout save for a few renditions of Sussex by the Sea and the dreadful 'Alllllllbion, Allllllllbion' chant. Brighton are one of those teams that has tremendous vociferous backing away from home - where fans often travel in their thousands - as opposed to home games, where the 'Withdean experience' seems to have drained them of their vocal chords.

The Albion actually had the better of the first half against table topping Norwich. To my untrained eye, midfielders Bennett and Navarro looked the pick of the home side. It was Bennett who opened the scoring with a free kick which found its merry way through a whole host of players into the net. Minutes later Glenn Murray had two (two!) shots cleared off the line. It was all going swimmingly for the Seagulls. What could possibly go wrong?


At half time we chatted away to Delia Smith and Fat Boy Slim - as you do. Turns out Delia is as nice as (Smoked Haddock and Quail Egg) pie. Five FIFA stars to the pair of them for being celebrity fans that actually go to games. 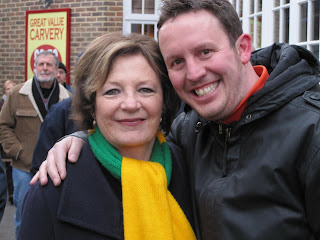 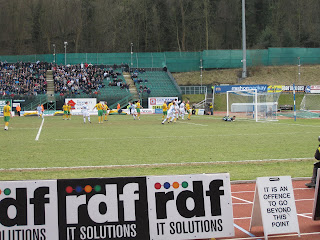 Bennett fires the Albion ahead. Probably worth clicking to enlarge this one. 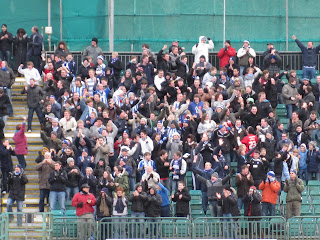 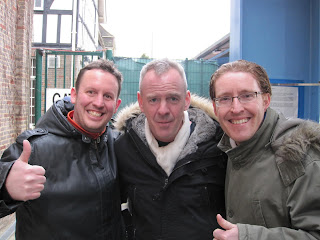 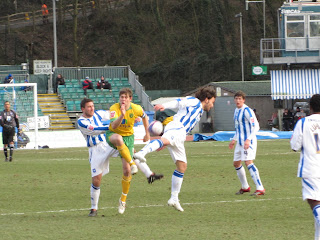 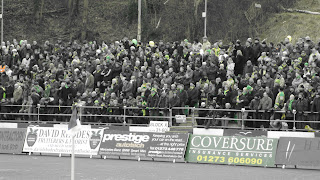 On the ball City.
After an iffy substitution in which Holroyd was hauled off in favour of Seb Carole the game started to turn in favour of the away side. Albion gaffer Gus Poyet - the man they call the "radio" because you can't switch him off - is a likable and relentlessly positive manager in terms of his personality but he probably got this one wrong.

McNamee, Martin, Johnson starting pouring forward for Norwich. Hoolahan began pulling a few strings and Grant Holt, well he is superman. Holt it was who equalised with deflected shot before Gary Doherty - who must have playing for Norwich for 150 years - popped up late doors to notch the winner with his noggin. On the ball City - at last. Harsh on the Albion but that's life.

As it is Valentines Day, I better put and end to this report and let you get on with your romantic plans for the day. I'm pretty excited because I've booked the wife a table today. Excited because we haven't played snooker for years. Boom, boom, tish. You've been watching.... 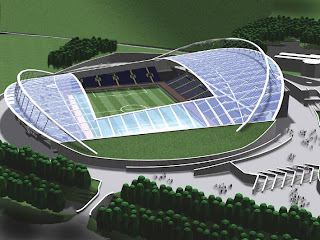 Were Norman Cook and Delia sitting together? Could be a great combination of mixing there..

Ive only been to Withdean once but left after an hour as the floodlight near the away fans failed and we could see even less than normal. I went back to the car which I had parked in a residential street and some bloke said if I parked there again he would chainsaw my wheels off???? Needless to say it was the ground and not the locals that put me off returning

Sublime heading, Daniel. Had u been saving it? Doing ITFC I always wanted Bramble to go on loan to Celtic and then get a three-match ban: "Titus out for the Bhoys".

I too have been only once to the Withnail Stadion. We sat in a stand that appeared to have been knocked up with scaff earlier that day. It was one of the coldest matches I have ever attended. Jim Magilton was wheeled off injured on the sort of upright trolley used to move fridges (seriously). It was hilariously funny and tragic at the same time. I think it ended 1-1 but I could see so little, I'm not sure.

Great pic of Grant Holt, btw. He looks really silly. The caption could just be: "Ooooooooo!"

@The General - Cook and Delia (there must be a headline in there somewhere) weren't sitting too far apart.

A lot of away fans only make the one visit to Withdean and vow never to return. Can't blame them really. Just one more season after this for fans to endure then it's off to the shiny new stadium at Falmer.

@PresuminEd - "Titus out for the Bhoys" = Genius my friend!