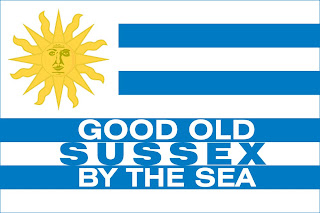 Brighton Rock
Southampton 1-3 Brighton (15:11:09)
- click photos to enlarge image -
I'm probably bereft of any Albion supporting credit nowadays. With the non-league coverage on these pages coupled with the European stuff something had to give. Unfortunately, it was my 30 year association with The Seagulls and my £400 quid season ticket in that athletics stadium. I'd earned my blue and whites stripes in the former years though, having seen them play at around 80 grounds and them generally ruling my life over that period. Hell, I even played for the youth team in the early 90's (get on with it lad - Ed).
On paper, this match appeared to be a bit of an example of how mod£rn football had become a little bit rubbish. In years gone by, a football special would have been laid on to take the travelling hordes down to Hampshire for this (sort of but not really) local derby. On this November Sunday though, we had a choice of a *deep breath* rail/bus replacement service to Worthing from Brighton before boarding an actual train or to go via Clapham Junction at an extra cost to both our wallet and (drinking) time. Like it or lump it and that's £22 for the match ticket please.
We opted for the bus to Worthing. By we, I mean Stoffers from Germany, Roland and Frank from Belgium and in a change to the advertised programme - Cynical Dave! In a real moment of weakness the previous night (caused by beer) Dave had agreed to attend his first league match for three years. There is nobody more cynical than he with regards to league football, hence his name. The foreign lads had been up for this match for months. They'd ask to attend an Albion game and I thought one against the Saints (away) would show the Brighton fans off in their best light - I wasn't to be disappointed.
As we made our way through Howards' Way country to Southampton, Cynical passed the time by recounting great swathes of Howards' Way dialogue much to the bewilderment of our guests from abroad. He really is the font of all useless trivia knowledge; mental note to self - download that theme music, it was nae bad pal.
We take our pub research very seriously here at EFW. So the thought of entering a Yates or any other chain pub didn't really appeal. Especially as on this day, it looked as though the police were there filming the next series of Danny Dyer's Football Factories outside Yates. Instead we opted for Goblets just up the road. A basement bar full of goodies; cheap beer, good food and superb music. What's not to like? Seven pints later (blame Stoffers for setting an early pace) and it was onto the identikit St Mary's Stadium. You know the deal, new ground; Derby, Leicester, Boro, Cov etc just differently coloured seats.
We met up with a few lads from Rochdale inside. They'd been in contact via this blog and didn't think anything of driving 250 miles on a Sunday to see how their former darling of the terraces Glenn Murray was fairing. To make it interesting, they'd each invested some cash at 9/1 that he'd score the games opening goal. As if... 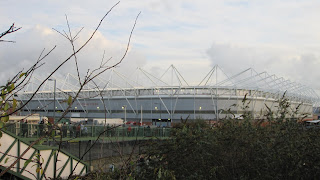 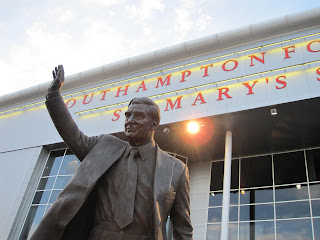 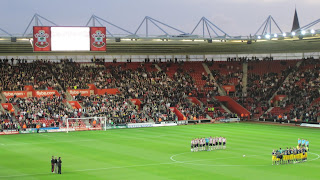 The mandatory minutes silence.
Having not seen the Albion since an away match at Yeovil last year, I wasn't sure how much I'd still care. Once inside though, it all came back to me. 2,709 away fans in full voice and a team that responded to both those fans and the new gaffer - Gus Poyet. Poyet's arrival seemed to given everyone a boost, not least, anyone in the UK selling Uruguayan flags. Brighton is now officially in love with Uruguay. The only downside being, we are no longer allowed to laugh at that bit in the Simpsons where Homer points to 'U R Gay' on his globe. Talking of gay, Saints fans were stunned into silence by the Albion's performance. Their only retort to 93 minutes of singing was a few sporadic homophobic chants. The sort banned by the football league a couple of years back. Expect a further 10 point deduction at St Mary's to follow.
You can read about the actual match here and indeed there. Suffice to say the Seagulls pretty much put in the perfect performance. Not a boot out of place. Just as you were thinking a Saints equaliser was coming at the end to undo our good work, up popped new skipper Andrew Crofts who sent the away end into an absolute frenzy by striking an 86th minute third (third!) goal for the blue and white wizards. Murray also obliged with the first goal to clean the bookies out of cash as our friends from the north returned back to Rochdale having trousered a small fortune. Happy days all round. 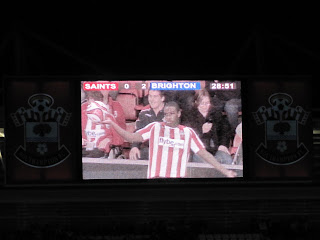 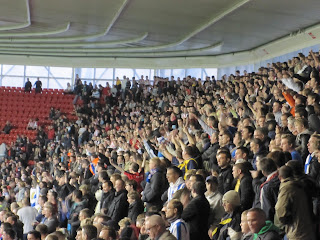 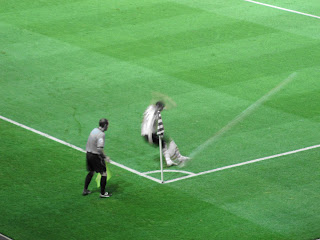 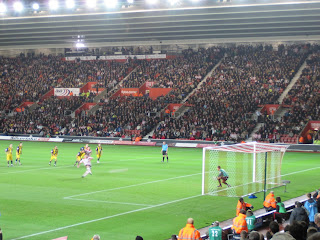 One for you Saints - The Lambert pen.
Andy Steggall, can you hear me Andy Steggall (with your thatched on hair-do), Sally Taylor, Carl Tyler, the late Jack Hargreaves, Shaun Udal, the entire cast of "The Village". Your boys took one hell of a beating. Nod to the Connecticut and NE Florida Seagulls for that little outburst.

Afterwards, Gus Poyet was understandably like the proverbial canine with dual appendages. He thought that his players and fans had done him proud. "You did me proud" he cooed. It was also his 42nd birthday and got a bit too carried away by saying it was his best ever birthday present. Something that Mrs Poyet will no doubt have brought up over their post match asado. 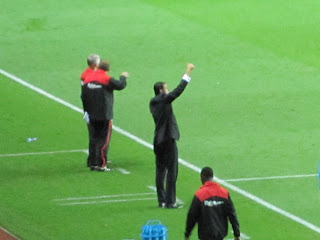 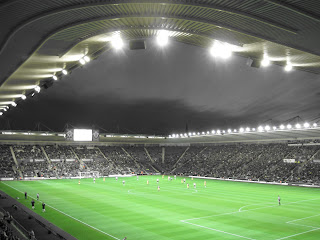 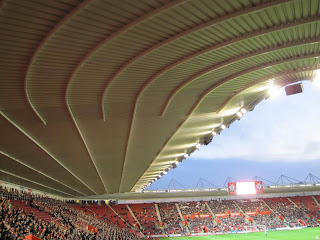 Largest roof in football?
It was genuine entertainment. £22 - get this - well spent. It was like (gulp) the old days. Mod£rn football in quite good shock.

On the way back to the station afterwards, things looked like they might be getting naughty. A few Saints hooligans were playing Mike Reeds Runaround with the police whilst the Albion fans were penned in by the police. We didn't much fancy any of that so we headed back to Goblets for three more points, sorry pints. There we met some genuine home fans who were more than happy to talk and make several salient points about Pompey.

We also met someone we knew in there who was driving back to Havant, so he (Richard) gave us a lift there a few hours after the match had finished. Regular readers will know that Havant is a favourite hunting ground for the EFW team in that it has pubs which are 100% bonkers. Again, it didn't let us down.
"Bitter? we don't sell that sh*t in here" said the landlady of the Six Bells. It was good to be back. Stoffers and Cynical then proceeded to swing a fast shoe on the dancefloor of said pub. The dj was in full flow, as were a selection of Daniella Westbrook look-a-likes. Cynical Dave's other nickname is 'Disco Dave' and boy did it show. You want video evidence of their good work? (yes please - Ed). Then head to You Tube my friends because by CLICKING ME and ME you'll be richly rewarded. A perfect end to a perfect day. Good old life!

Hugely enjoyable stuff as always from the most read football blog in NE Florida. On clicking on the link to the Southampton Echo (or whatever it's called) Floridians were amused to see a poll asking Saints fans "How did the Saints do against Brighton".
It would be churlish in the extreme to stereotype Hampshire folk as not the most intellectually gifted and indulge in tired old jibes about limited gene pools but surely 24 hours AFTER the game it's not too taxing for anyone to get that one right? Honestly if that's indicative education standards in Simon Cowell's Britain no wonder the country is in such a pickle.

Great result for the Seagulls, a team whose fortunes I kind of followed when I lived in Eastbourne and they weren't in the same league as Ipswich. And alongside Mr Poyet? Former Ipswich legend Argentine Maurccio Taricco of course! May his flowing latin locks bring as much joy to the Seagulls as they did to the Tractor Boys. Taricco's a bit of a character, and was a real favourtie at Town, in fact I wish we had more like him today instead of the legions of mercenaries mod£rn football encourages. Neil Warnock hated him (Treacle single handedly started the Taricco wars that labelled Sheffield Utd as 'Norwich of the North' and upheld a bitter rivalry throughout the 90's) so for that alone he deserves legend status.