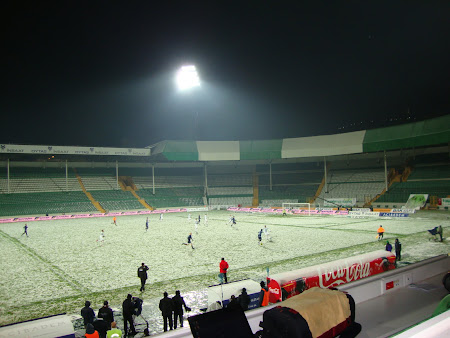 Christmas Turkey without the trimmings
Bursaspor 2-1 Kasimpasa (13:12:10)
Following the violence that marred the Besiktas v Bursa game last week, Ulas Gürsat reports on a match that, as a consequence, took place behind closed doors. Ulas is a football reporter for the Turkish daily Haberturk Newspaper.
The upshot of last weekends match at Besiktas, in which three people got stabbed, was that Bursaspor had to play their next two games behind closed doors. This, despite Bursa fans protesting their innocence at the unsavoury events at the Fiyapı İnönü Stadium.
Snow had descended on Bursa and temperatures had dipped below freezing. But it felt even colder than normal in the Bursa Atatürk Stadium, because of the lack of fans. It's weird, sad and eerie to witness a game of football taking place in Turkey without the usual backdrop of a crescendo of noise.
It's a well-worn phrase on European Football Weekends, but football is nothing without fans. 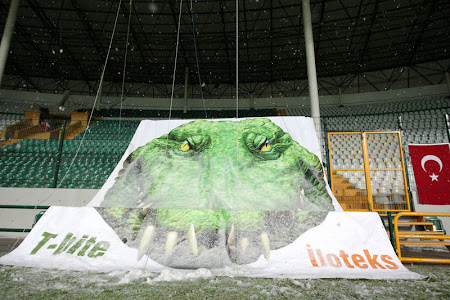 Crocodile blues. The lonely croc without his thousands of buddies, for once. 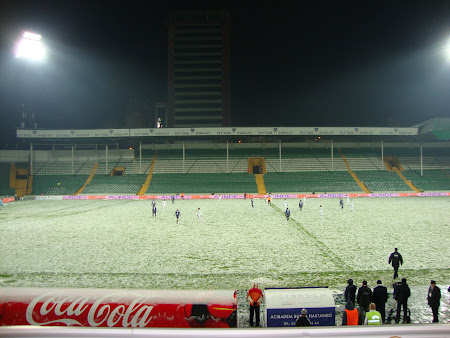 Enjoy the silence? There's nobody there. 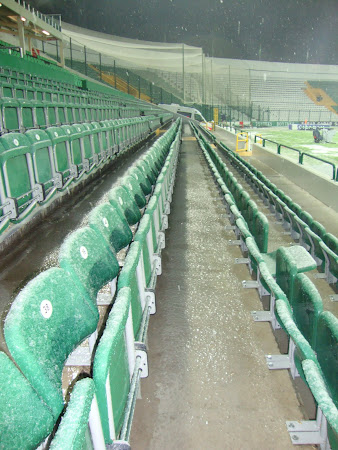 A frosty reception for the two teams.
Both teams were punished after last weeks hooliganism. As well as the ban on Bursa fans, Besiktas will play their next two home games outside of Istanbul, and without any fans present. I think it's a stupid punishment, not least because fans of the opposing teams are also banned, and for what? They're are being punished for having done nothing. Logic and football rarely go hand in hand in this country.
Bursaspor fans were still determined to show their support for the team. Hundreds of fans still braved the elements to welcome the team bus to the stadium. The players loved this and took time out to show their appreciation back to the supporters. After this, the fans turned their anger towards the national press, who had wrongly labelled them troublemakers. They started to burn newspapers, and not just to keep warm. After the protests they made their way to the local bars and restaurants to watch the match on television.
Bursa won the game 2-1 with a little bit of help from the Kasimpasa goalkeeper, who with a last minute blunder, handed the three points to the home side. There were only 100 journalists (including me) and 50 club officials in the stadium. Brilliantly, the Bursa directors were trying to chant during the match. Can you imagine Gold and Sullivan starting songs in an empty Upton Park? Actually, I wouldn't put anything past those two jokers. 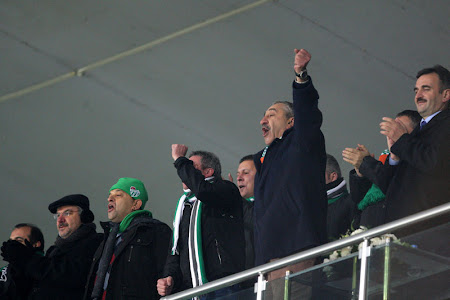 Come on feel the noise? Bursa directors do their best to notch up the atmosphere. 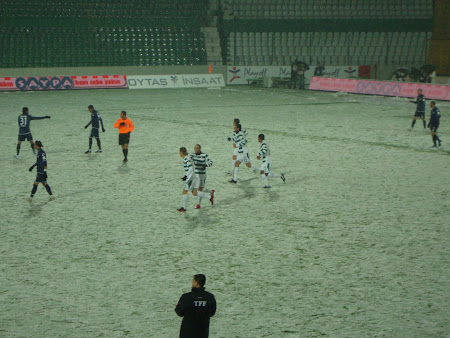 Snow joke. A goal for Bursa. 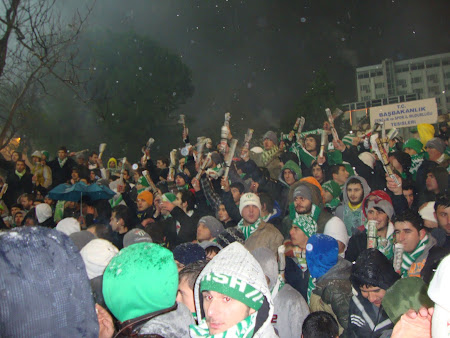 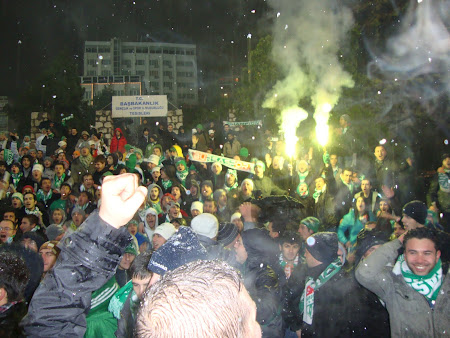 ...fireworks and protests. This type of punishment will solve nothing.
For more photos of the day CLICK ME
Have you ever seen a game behind closed doors? Feel free to comment below.
Posted by Danny Last at 11:05

I can only imagine how weird it is to turn up in an empty stadium. A really good piece there.

We are starting a new blog in a couple of weeks, you should come check it out then at www.bornoffside.net

I disagree that football without fans is nothing. Football is beautiful, football culture is ugly in many cases. If a club's fans misbehave, severe punishments are well deserved. I remember there used to be times when banter and segregation of fans were inexisting, people just socialised and chatted while watching the game. Those times should come back. Of course a passionate crowd is fantastic, but no violence is needed for that. Football may be nothing without fans, but I prefer a 50 fans that are non-violent than a 50000 where you feel intimidated.