Super, smashing, great day out ruined by 90 minutes of football. 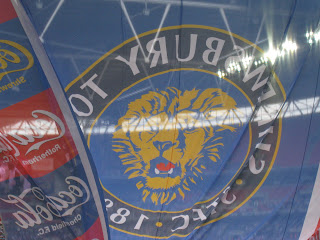 Our cousins from overseas must be affording themselves a giggle/scratching their collective heads at the ticket prices for what was - in old money - a Division 4 match. Bank managers look away now when I tell you that the cheapest tickets for this League Two Wembley Play Off decider were £31.25p each (each!) rising to a staggering £61.25 each (each!).

Fact is though, 53,706 punters turned up. Where else in the wide world of sport would you get such a tremendous showing for a game in the nether regions of the football league!? I'll tell you where, nowhere that's where. (bit touchy today Lasty, got a hangover!? - Ed).

1st prize for the winners of this match was quite a considerable one. With Southampton, Norwich City and Charlton Athletic all relegated from the Championship, League One next season reads like a who's who of fallen giants. By comparison the runners up would be jogging out at Burton Albion.

Shrewsbury had reached the final courtesy of an outrageous match against Bury in the semi finals. Bury threw the proverbial kitchen sink at The Shrews for the entirety of their 2nd leg at Gigg Lane but keeper Luke Daniels excelled with his vorsprung durch technic you know and became an instant Shrews legend in the process. That reminds me, mental note to self *cut down on my porklife, mate, get some exercise!*.

The League Two Play Off final has become something of a traditional day out for Mr Green and I. There are a couple of Shrewsbury fans on the European Football Weekends Facebook group and hence we leaned towards Salop rather than Kent in terms of lending our vocal chords worth of support.

In sharp contrast to last weeks shenanigans when I was making a nuisance of myself in the press box at Wembley, I approached this match as an actual fan. The subtle difference being beer and plenty of it.

You might think that running this website is all fun and games but sometimes you have to put in the hard graft. For example on this sunny Saturday morning -in the interests of research and photographing shiny happy people laughing - Mr Green and I had to arrive at the Green Man pub at Wembley a full 4 (four!) hours before kick off. It's a hard knock life for us.

Around 1,500 Shrewsbury fans had the same idea. The pub was Bobs Full House. We were told in no uncertain terms that this gathering of Shrews fans in Salop would have had the local police wetting themselves. As it was, fans sang, beer was sunk in vast quantities, cats ended up kissing dogs and it was an resounding success. Good luck to the landlord of that place who is now probably sitting on a beach in the Caribbean as a result of his days takings. 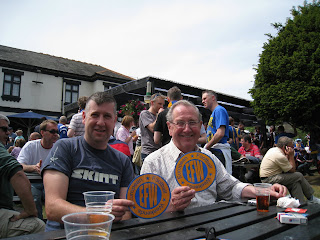 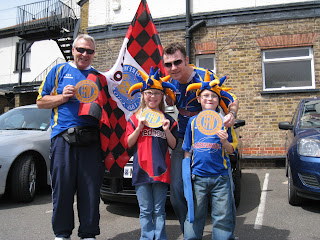 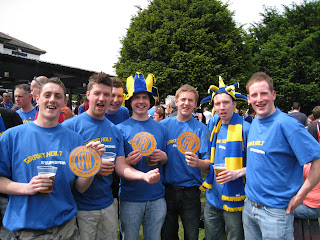 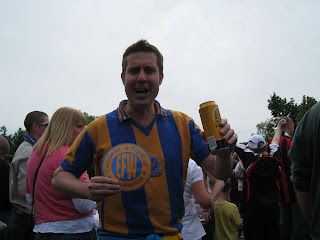 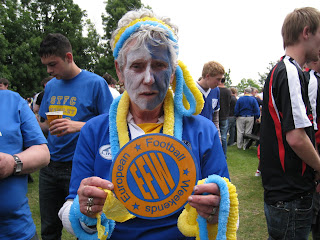 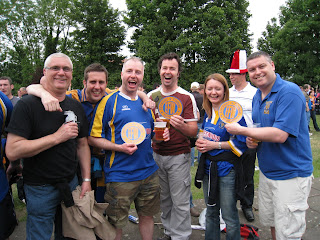 Perks Senior, Perks and Lee Vaughan amongst others enjoying their pre match bevingtons. 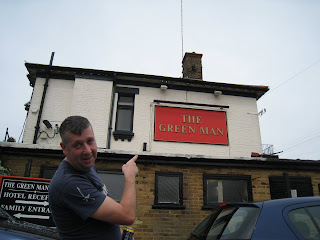 Mr Green is the Green Man.

Matchdays in and around Wembley are actually superbly organised. Each pub was designated as being either a 'Shrewsbury or Gillingham pub' and whilst this rules out any exchange of banter it also rules out any chances of bother and we all like our football with no bother don't we.

As Mr Green and I took our seats in the beer garden, we were joined by Wolves season ticket holder Mike Davis. Mike turned out to be fantastic company regaling us with tales of Billy Wright, his appearance at the 1966 World Cup Final and the fact he met his wife 50 years ago on the steps of Wolverhampton Town Hall - at 5pm - after a reserve match!

As the pub filled up to capacity we were also joined by EFW Facebook members and Shrews fanatics David Perks and Lee Vaughan. Perks had travelled over from Germany especially for the match. He has lived in Stuttgart for five years and earns himself 5 FIFA stars for being the proud owner of a 'Kickers Stuttgart' season ticket. Good on you our kid!

Anyone who knows and goes to football will know this feeling: the pre-match fun and japes are the best bit about going to a football match. The actual game itself (very) often fails to live up to the expectation. How often does the football get in the way of a good day out!? This was very much the case on this day. The match was and lets be brutally honest about this 'bobbins'.

Shrewsbury had thumped the Gills 7 (seven) nil in their home match earlier on in the season. As we know though, football of course rarely follows any conventional wisdom and it would have been spurious to suggest that that result would have any effect on this Wembley get together. 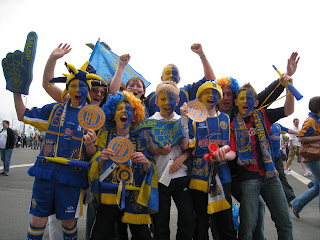 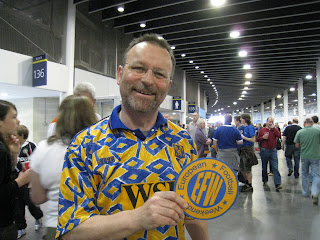 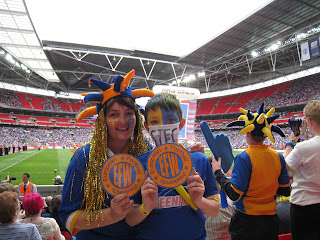 As we took our seats in the Shrews end for afternoon the high octane thrills and indeed spills were notable by their absence. It took 31 minutes before some Nutter had a shot at goal. Gills John Nutter was that chap and his long(ish) range effort forced keeper Luke Daniels to put down his book and get his shorts dirty.

Both teams looked nervous both were struggling to retain possession and was a blessed relief to all and sundry when Clive Oliver blew his whistle for half time forcing Mr Green and I back to the bar for a welcome pint of turgid weak Wembley lager.

Things slightly improved in the 2nd half. Shrewsbury were the better side and were growing in confidence which is a preference for the habitual voyeur of what is known as parklife (that is enough, final warning for you - Ed).

Ben Davis - who had earlier in the week been photographed with his breadknife in the local paper wearing a pair of marigold gloves - delivered 1 x rasping volley which forced Simon Royce to put down his book and produce 1 x splendid save. Many Shrews fans were sporting marigold gloves by the way in homage to the Davismeister.

What tactics did Town gaffer have hiding up his blue and amber sleeve!? Well, with the game seemingly heading into extra time he threw on David Worrall and Omer Riza. As it was though, Gillingham's 20 goal hero Simeon Jackson was to have the last word. He chose the very last minute of the game to announce his arrival. Prior to this moment he'd done nowt. Josh Wright swung in a corner and Jackson lept like a salmon and headed Gillingham into League One.

So the Gillingham fans got to dance to Status Quo whilst the Shrews massive were left to reflect on another Wembley disappointment. Mr Green and I let the crowd die down by sinking a few more bevies in The Bear public house before returning to Brighton for an evening in EFW HQ. It had been a splendid day out in the big smoke ruined only by 90 minutes of football. Cheers! 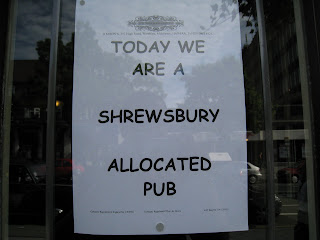 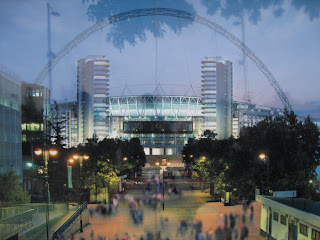 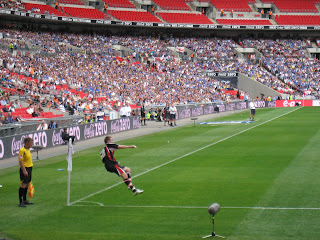 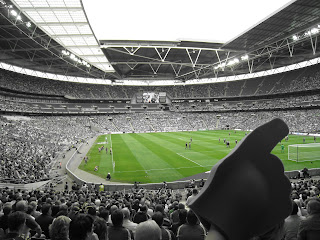 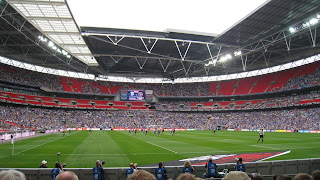 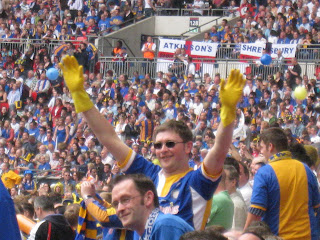 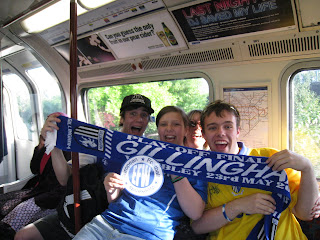 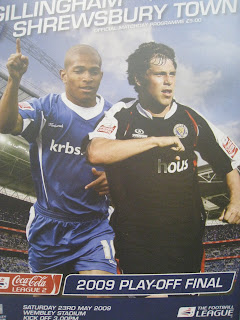 I think the Green Man pub is designated for that afternoons losing side. It's an unlucky omen bar, I went there before the '98 and '99 FA Cup Finals - and the rest is history.

Boston United Are In The Unibond League Which Is A Few Steps Down From League 2/ Divison 4!!

Was U Thinking Of Burton Albion?!

Great heads up Big Dave, I did mean Burton Albion and have since:

ii) Hung my head in shame