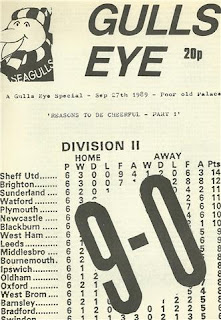 On the wings of a sparrow...

by Larry from Lancing
It's a most unusual relationship. Perhaps an analogy will help. Think of the celebrity couple Sophie Dahl and Jamie McCallum. One is glamorous, sleek, edgy, fashionable and popular; the other is dumpy, bit strange looking and of appeal to a rather weird group of people. Despite this they sort of go together and there you also have Brighton & Hove Albion and Crystal Palace. I don't think we need to spell out here who is Sophie and who is Jamie.

There's no real reason for this hate, love relationship. Hate is of course uppermost, though in recent times an unlikely alliance has been formed between fans who have both battled to save their clubs from lunatics.

There's no real geographical reason for the rivalry, we're not in the same county let alone the same city, there's no deep routed historical reason, no trading rivalries between the areas, no religious differences, pure and simple it's football. A genuine footballing rivalry based on the fact that we used to play each other a lot and had managers happy to stoke up the fires of rivalry. We even changed our nicknames to annoy each other, the Glaziers becoming Eagles and the Dolphins flipping to Seagulls. 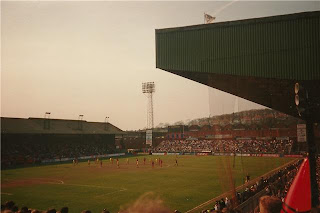 Palace v Brighton from March '89. The view from the away end. Note the netting between fans and the bizarre pencil inflatable. This is the infamous match in which referee Kelvin Morton went quite literally bonkers awarding penalties willy and indeed nilly. More of that in Part 2.
Growing up in 1970's Sussex the hated rivals were always Palace, even though Portsmouth was just 30 minutes from where I lived. I remember a football annual from 1980 having a feature on the self proclaimed "team of the decade" and the headline read "Terry's Toppers," a reference to their then manager El Tel. This was too much for this 10 year old and within minutes the Christmas present had been vandalised and Terry's Toppers had become "Terry's Tossers," a stark improvement I'm sure you'll agree. 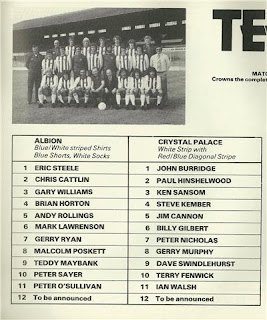 The games have become less frequent over the years and to be honest lack the chaos and anarchy of the 70's, though when they do come around they have that special feeling that only this type of rivalry can give you. Now I'm no fan of war and I'm more likely to join the Salvation Army than the British Army, but setting off for a trip to Selhurst Park is probably as close as it comes to the feeling of going off to war. Troops assemble at all points, from Littlehampton to Worthing and right along the coast, inland from Brighton to Burgess Hill and Haywards Heath, the army grows as we prepare to march on Selhurst. All this for a football match and based on a rivalry that anyone outside of Croydon or Sussex never really understands. 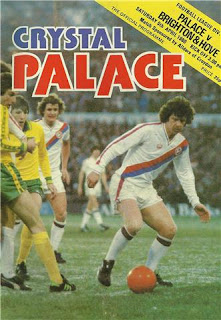 There have been some cracking games between us, my first being a 0-0 draw at the Goldstone in 1979. The Boxing Day and Easter clashes were the games you most looked forward to, walking into the North Stand at 12.30 for a 3pm kick off to get your spot on the terrace and launching into the first rendition of "Hark now hear the Brighton sing..." is a moment that stays with you forever. A little corner of Hove Park should have one of those blue plaques commemorating those who chased each other around there before, often during, and always after Goldstone games. These were more than football matches, it was pure theatre on a grand scale with Alan Mullery more than happy to ham it up.

So for these, and many other reasons, on Saturday I would swap a 5-0 defeat for my beloved stripes for a win by a Yorkshire side in blue and white stripes. It's written in the stars that our final game at Withdean sees the Albion clinch promotion to the Championship with a 5-0 win over Palace which condemns them to life in the 4th division.

I'd fly over Selhurst tomorrow,

And sh*t on the bas*ards below.

Part 2 to follow shortly including more derby memories and the REMF match between the two sets of fans this Friday.

Looking forward to part 2, will that be coming from a Palace point of view to even things up? How about an article on Palaces 12th man The Holmesdale Fanatics ?

Cheers for clearing that up..always thought it was a strange rivalry!

Oh and do you mean Jamie Cullum not Jamie Maccullum?

@Wade - Part 2 isn't going to be from "the other side" but Part 3 maybe if someone comes wants to give their thoughts on the Brighton rivalry.

@Dickie - No problem and yes, you're correct it should be Cullum. Sorry.

By the way, there was a good article in The Guardian today by Dominic Fifield saying that Palace's very existence is at stake in their relegation showdown with Sheff Wed on Sunday:

Surely they won't go out of business, at least I hope not.

Entertaining if a little one sided but given how cr@p the seaweed are we'll give you that.

I disagree with your bit: "There's no real geographical reason for the rivalry, we're not in the same county let alone the same city, there's no deep routed historical reason, no trading rivalries between the areas, no religious differences, pure and simple it's football." Yes it is football and footy in its purest form, something fans of fashionable clubs will never understand! However, may I direct you to this link: http://www.holmesdale.net/page.php?id=82&story=1272 for a clearer understanding of the historical roots of our hatred of you.
This set of links is also worth a bit of time: http://www.holmesdale.net/page.php?id=166&cat=2