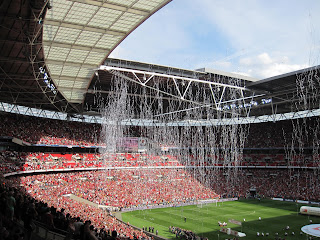 Carefree in the Community
Chelsea 1-3 Manchester United (08-08-10)
The Football Association Community Shield or, if you prefer, the traditional curtain raiser to the sea..(Oh no you don't - Ed.). Pundits have been calling this game the TCRTTS for as long as I can remember but, these days surely that's the Emirates Cup isn't it? Or the Ajax Cup or maybe the Thailand Invitation Cup? Charity starts at the home of football though so we'll stick with this for now.

Chelsea made a whopping 11 (eleven!) changes from the last time I saw them. That was for a league game against Nottingham Forest at Stamford Bridge in 1991 - before Sky invented football a year later. It had been 17 years since I'd seen United, and only Grandad Giggs remained from that FA Cup tie with Brighton at Old Trafford.

You'll gather from those statistics that EFW doesn't pitch up at clubs of this stature very often. We're mainly all about the English Non-League and European football on this site. However, when one gets invited to Wembley and the magic words 'free' and 'beer' are mentioned - we're quite happy to pack our moral compass back in our pencil case for the day.

Chelsea opted for an orthodox approach to this game via of a couple of routine friendlies whereas United chose a less conventional route. Wayne Rooney was out until 5:30am the week before singing football songs and urinating in the street whilst trying to smoke a 'Manchester Ciggy'. He was trumped by Anderson, who saw Rooney's 5:30 and raised him a 7:30am, and wrecked his £125,000 Audi whilst nearly killing himself. Best of all though, Fuelish Gary Neville put petrol in his diesel car, had to call Neville Neville to help him out and "Everyone laughed because Gary has a reputation for being serious and he was left looking dozy."

Anyway, enough of sadistic rumours of footballers private lives - did someone say free beer? Mr Fuller and I were smuggled into Wembley via a back door - in wigs and sunglasses - in case we were noticed by the Non-League fraternity. I didn't even have time to grab a team sheet on the way through but did mange to get my secret stash of Diarylea cheese slices past security - saves 50 pence at every Non-League game. You can have that tip for nowt.

It was interesting to note the behavioural patterns of the stars outside Wembley. Pat Jennings was the first chap we saw. He signed a few autographs with those huge hands as he pushed through to the front. Next up was Sir Bobby Charlton. Hats off to him as he signed every single autograph and posed for countless photos - with a smile. Kenny Dalglish and Ian Rush didn't have time for anyone, unlike Doug Ellis who was bemused but delighted that anyone had actually noticed him. 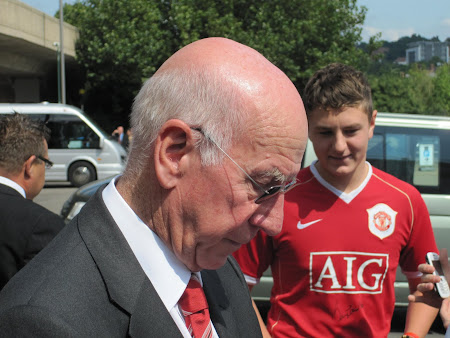 The full 5 (five) FIFA stars to Sir Bobby for signing everything.
EFW were here as guests of Ericsson. Their big cheer confetti campaign for the World Cup had been a huge success thanks to our new best friend Adam Lloyd. If you think we're going to start saying Ericsson are shaping the future of mobile and broadband Internet communications you've got another thing coming. What's that? The very same executive box is available for the Wembley Muse gigs? Ericsson, Ericsson, Ericsson (repeat to fade).
If the World Cup taught us one thing, it was that every football match should start with the referee plucking the ball from a plinth as the teams march onto the pitch. Sad but inevitable then that the FA suits have been slow to react yet again. As per bloody usual the ball arrived at the centre circle in willy-nilly fashion and backwards officials have missed yet another trick.

In the United end Wembley officials pulled down a few 'Love United, Hate Glazer' green and gold banners. Why? I thought we lived in a democracy - obviously not. The Chelsea fans opposite seemed happy to milk the 'Stand up for the Champions' song with every sinew. Once they tired of that they bizarrely started singing the Arsenal ditty 'Stand up if you hate Tottenham'. Both sets of fans were in good voice, probably the cheap ticket prices meant they had a few bob spare to spend on a couple of pints in the newly errected fan zones outside the stadium.
You don't need me to tell you about the match. Reports from it are all over the Internet. One thing is for sure though, Carlo Ancellotti wouldn't have said anything interesting afterwards. Evidently, he's a nice chap off the camera. But quotes like "Joe Cole is Joe Cole and Yossi Benayoun is Yossi Benayoun" are hardly Hollowayesqe are they? Apparently, after the fun and games they had with the special one, Chelsea have inserted a clause in his contract in which he's not allowed to s..(that's enough of that - Legal Ed.). 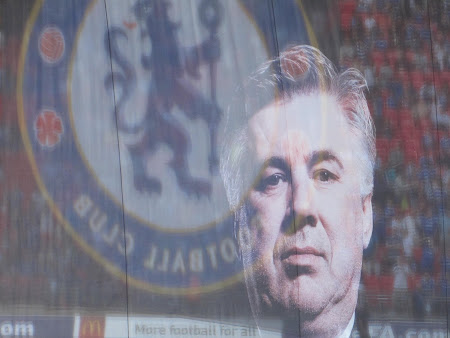 "Joe Cole is Joe Cole" Thanks for that old chap. 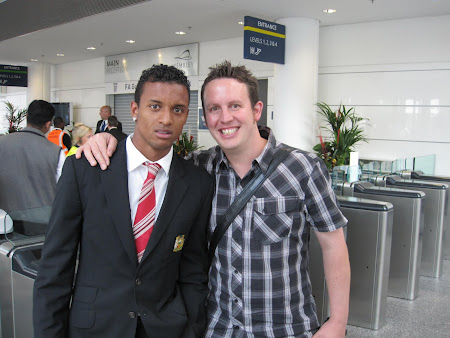 When Nani met Danny. By the look of his face he was quite shocked to see EFW. 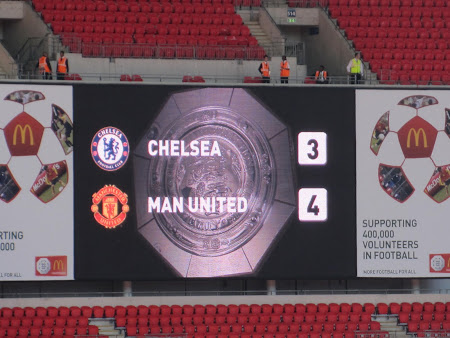 Looks like I wasn't the only one on the beer.
So how do we top a day of luxury at the home of football? One in which we dined on roast beef, a selection of cheeses, pie (pie!) and an unlimited supply of free beer and wine? One which was bookended by meeting Pat Jennings and Nani? There's only place to head to, and that place is Wheatsheaf Park. Next Saturday Lewes will be there to open their Conference South season against Staines Town. Massive.
For lots more photos of the day CLICK ME.
The Ball is Round version.
- Feel free to comment below -
Posted by Danny Last at 11:24

Lot's of reports on internet about this match but this one is the best :-) Nice pics. Excellent!

What about the pie?

@FootballFrans - Thanks for that - really appreciated.

@Simon - There were 3 (three!) types of pie on offer. They even had little Wembley Stadium flags planted in the them. How the other half live eh?

Where are the pics of these pies of which you speak ? The Ball Is Round has pics, but you...? Nothing !