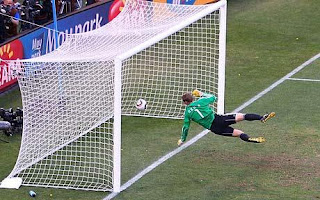 An inept lacklustre catastrophe. Apart from that...
England 1-4 Germany (27:06:10)
EFW missed out on the misery back home as we where were out in Madrid. There we inadvertently found ourselves celebrating with thousands of Argentinians in Puerto del Sol following their win over Mexico. Want to know what it was like to follow your team 5000 miles to get humiliated? Tim Stewart was at the England v Germany debacle:
Greetings all,

The omens were poor once a local radio station unveiled its 'mystic' octopus that wraps its tentacles round balls bearing team names to predict match outcomes. Unfortunately, the all-seeing sea creature plumped for Germany.

I had a great couple of days working my way along stunningly scenic stop-offs on the Garden Route by all modes of transport, including hitching on the back of a truck, before a 12-hour ride on a happy clappy bus arriving in Bloemfontein at 4am on matchday. I was bombarded the whole way by biblical propaganda videos so deafeningly loud that I could still hear them clearly through my earplugs. Bloemfontein is bang in the middle of South Africa and it was quite bizarre sitting at the front of the top deck as we headed deep into the interior of endless farms in the dark with a full moon overhead and tales of God's miracles in my ears.

English and German fans mingled without any trouble that I could see all day with the idiots priced out by the cost of getting to Africa. I was in a guesthouse two minutes from the stadium and the waterfront bars were the same distance, which made a pleasant change from the usual park-and-rides to kick-off.

On to the catastrophe of a match, which promised to be such an exciting belter I even joined in the singing of the National Anthem. There was nothing in it until we conceded a Sunday parks goal from a hoofed Kraut clearance but then we were battered and could have been three down and out. At 2-1 down, even from the upper tier on the halfway line, I could see that Lampard's shot was well over the line - as could most of the 40,000 in attendance. I was showered in beer as the England fans went prematurely nuts.

Had we gone in at 2-2 with our tails up, who knows how the second half might have panned out. As it was, we pressed strongly for an equaliser and Lampard added to his World Cup record near 40 shots without a goal by hitting the bar again. Then, the Germans predictably picked us off with counter-attacks as efficient as a well-oiled BMW.

Sepp Blatter, who was there, should be embarrassed by his continued failure to adopt Wimbledon-style goal-line technology and spare the blushes of myopic officials.

Although their gaffe was a major turning point, the Germans were still technically better and the controversy should not gloss over our defensive deficiencies throughout the match and obvious shortcomings during yet another disappointing tournament. Had we made light work of a very favourable group, we would not have faced another seeded side until the semis. Instead, lacklustre and inept displays made life unnecessarily difficult.

Wayne Rooney's billing as the 'White Pele' looks ever more laughable compared to the likes of Lionel Messi. And if that was our 'Golden Generation' of players who will be too old for the next World Cup and with the Premier League now packed with foreigners, it is hard to see how England can mount a credible challenge at future tournaments. There needs to be a sea change with investment in young English players and the national team's interests prioritised. It won't happen.

I am now returning to Cape Town and have Spain-Portugal and Germany-Argentina to console myself though I'm not sure I can bear another night of German celebrations. Some nice chaps from a German fanzine gave me a free 'Deutschland 2010' T-shirt. Luckily, I lost it, else it might have ended up on my post-match barbecue.

As Gary Lineker once said, football is a simple game played by 22 men with a ball - and then the Germans win.