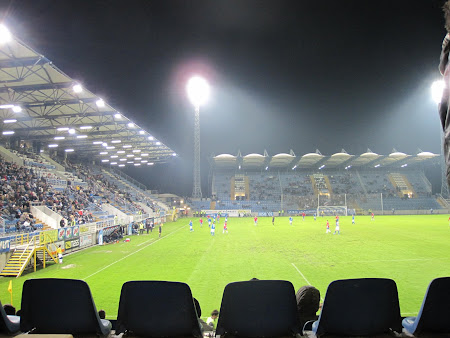 BETTER LAKE THAN NEVER
Zalaegerszeg TE 2 Vasas SC 1 (22:10:10)
by Chris Mills
THE winning goal came in the final second but the European Football Weekends Oktoberfest contingent are getting their disclaimers in early.

Whatever any Hungarians tell you, the EFW team did not pollute beautiful Lake Balaton with their toxic sludge. Later, however, a field of maize and a several rows of ornamental shrubs were pretty-much destroyed by the barely controllable ground-hoppers in an Olympic-standard display of synchronised urination.

And so, pursued along the autoroutes by fist-waving Magyar farmers and gas station managers, the EFW Oktoberfest trundled very slowly through breath-taking autumnal scenery aboard the Danny-bus – having alighted at the Budapest hotel of the same name (surely “Hotel Danubius”? Ed.) – towards the unsuspecting western Hungarian town of Zalaegerszeg.

Cultural highlights on the way included a stop-off at the town of Siófok on the south bank of Lake Balaton – a 592 square-kilometre (77km long) body of water glistening the late October sun, which was barely acknowledged by the majority in favour of cheap beer. 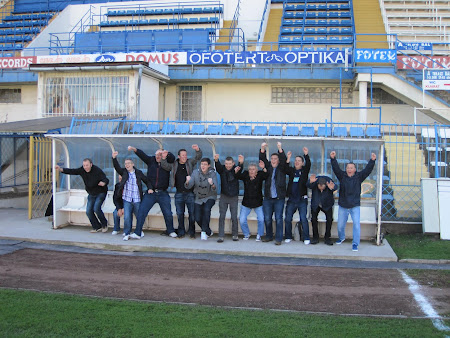 Reaction to the news that beer would be available on the Danny-bus was favourable. 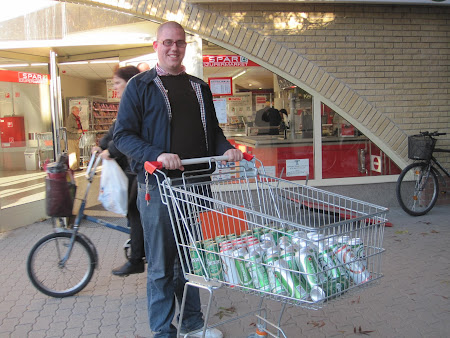 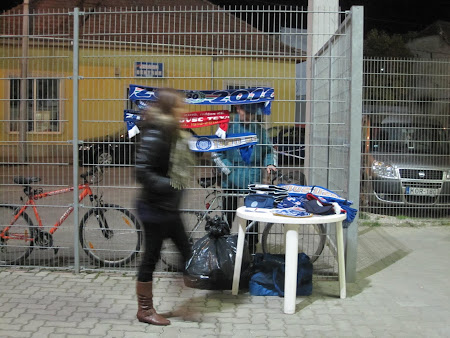 The ZTE megastore.
The match itself (in the Hungarian Soproni Liga – Soproni is a cheap but very drinkable beer) was damned by EFW experts with faint praise (surely “no praise”? Ed.) who appeared to have been expecting the English Premiership. Or this may have been due to the fact that Stoffers - a 6ft something German linguistics expert - was the only man present who was able to pronounce “Zalaegerszeg”.
Less sophisticated members of the crew confessed to having enjoyed the game, appreciating its unpretentious kick-and-run style and equally simple approach to finishing. It was won in bizarre style by the home side (see Stoffers for spelling/pronunciation) with literally the last kick of the match. This apparently coincided exactly with the final whistle, causing the officials to deem no re-start necessary.

Pre-match in the beer/hot-dog/popcorn area under the stand, it appeared that apart from the EFW team, only around eight or nine locals had showed up. But once inside, a small but perfectly formed block of Ultras were visible waving giant flags and chanting in that ominous Eastern European/Communist way directly behind the far goal. There was some good call-and-response chanting between these nutters and the 2,000-odd others allegedly present in the stadion (Vasas, the “Sport Club of Iron and Steel Workers” from Budapest, brought about 40). 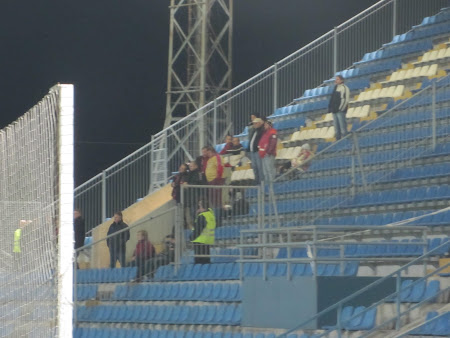 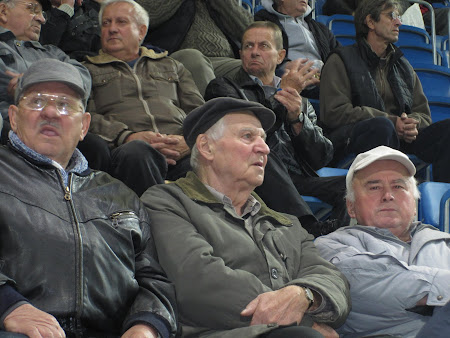 The three wise men of Zalaegerszeg 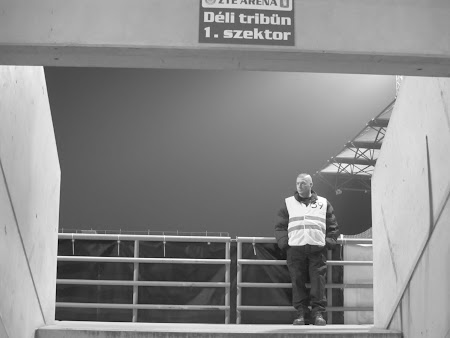 Not much of a queue at the Deli counter. 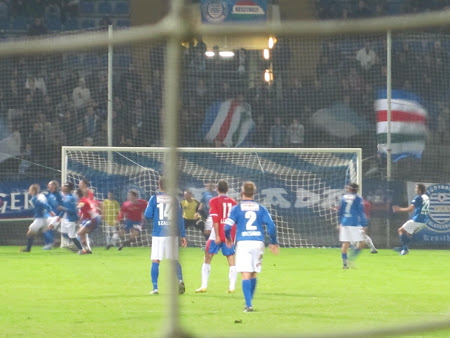 The action unfolds in front of a small but perfectly formed block of ZTE Ultras.
Other fun elements included a home shot hitting the bar late on, the fact the shock final-kick goal caused the giant scoreboard to momentarily read “1-2” instead of “2-1” and the pitch – it had been clearly home to 20 or 30 horses before the game. Divots as big as yer head were kicked up and skid-marks as long as yer trousers were ploughed into the “turf”.

A certain degree of hostility from the locals was reported post-match and, indeed, the Oktoberfest boys were later mystified to have to laugh off a gang of 15-year-old “Ultras” (from the safety of the inside of the bus) who'd sadly mistaken us for some sort of Vasas SC hooligan crew. 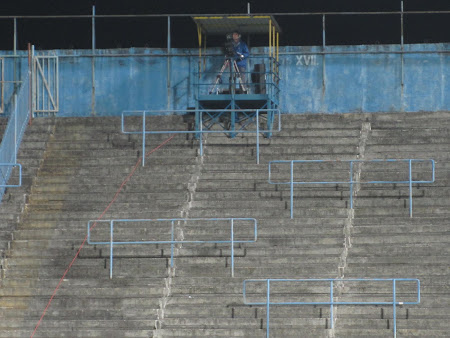 Terrace Trent D'Arby? (That is a straight red - Ed.) 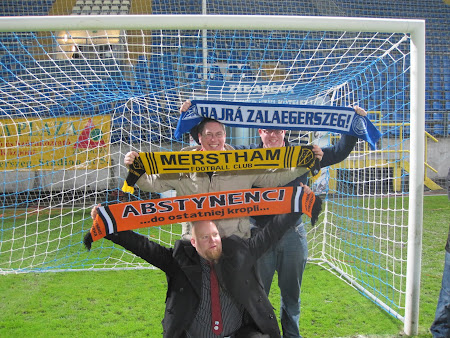 We all follow the Abs...Mer...Zalae...oh forget it.
For lots more photos of that night and the rest of the trip CLICK ME.
For an excellent video put together by The Ball is Round blog CLICK ME.
Follow European Football Weekends and The Ball is Round on Twitter.
- Feel free to comment or ask any questions below -
Posted by Danny Last at 09:55