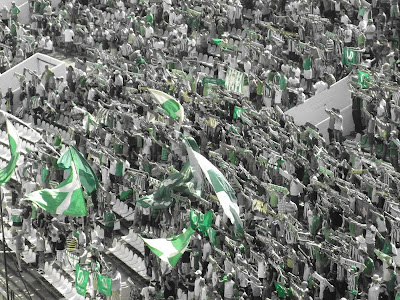 Mad Béticos and Englishmen
Real Betis 1-0 Mallorca (11:09:11)
Beautiful women, sweet oranges, 3000 tapas bars and Real Betis - that's my kind of European Football Weekend. Forget your swimming with dolphins nonsense: a visit to the Estadio Benito Villamarín has been on my 'things to do before I die' list for years. Betis are a fun club; one with a fan base possessing an all important - to me anyway - self-deprecating sense of humour. Think Manchester City before the money started to roll in. It may have been the thick end of 40 degrees today, but that didn't stop a mad Englishman and around 40,000 Béticos going out in the midday sun.

They're in debt of course. It's an all too familiar tale in Spain, and not just in footballing circles. I think it's fair to say Betis are one of the clubs at the centre of the recent strike action in Spain having not paid their players, past and present, large sums of money. Their financial strife sings to the tune of €80m if rumours are to be believed. Best purchase some slippers in their club shop I thought, that'll endear me to the locals. Always thinking, me. It was a tricky choice mind you; they had three (three) variations. Gasp. 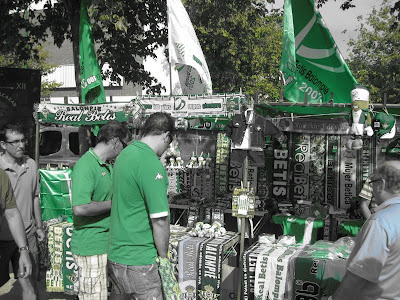 A pair of your finest Real Betis slippers por favor 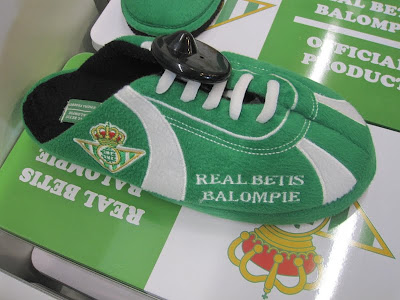 Two words: Bobby. Dazzlers.
So with that financial turmoil - and don't worry we'll get onto beer and stuff later - there were no big pre-season signings for the Verdiblancos to get excited about. Aside that is from the towering Roque Santa Cruz, bless him, who has given up a life's supply of free chicken at Blackburn Rovers to move, on loan, to the stadium formerly known as the Manuel Ruiz de Lopera. The ground regained it's old name around November time when the sort-of-owner (it's complicated), Luis Oliver was trying to curry favour with the fans. It worked. Evidently, de Lopera, the majority shareholder at the time, robbed the club of money and has since been kicked into touch in favour of the imminently more popular, Rafael Gordillo - an ex-player. All traces of the Lopera name have been removed from the stadium. 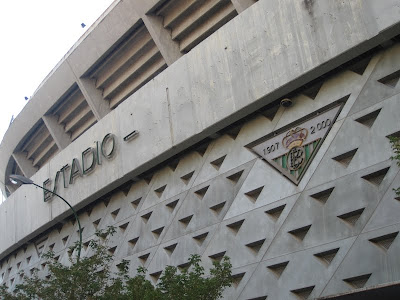 Rip it up and start again. The Lopera name has been torn down. Rumour has it the new letters were ready to be put up - but they got stolen. You couldn't make it up.
The opponents today, Mallorca were led by yer actual Michael Laudrup. He's in a mood with his owners having lost midfield dynamo, Jonathan De Guzman to Villarreal in exchange for €8m on the final day of the transfer window. Also, and rather disappointingly for me personally, there was no Pierre Webo on their teamsheet. He's been sold to Istanbul BB. That saddens me because huevo - it sounds the same as Webo, trust me - in Spanish means egg, and it used to make me chuckle with eggscitement (groan - Ed.) watching him play. Stepping into Webo's size 9's is former Sevilla (boo!) youth prodigy, Alejandro Alfaro. A good player and all that, but nothing doing on the comedy names front. Tsk.

Madre Mia, Mr Last. You've done your homework, no? Well, if you spend any amount of time in the company of Jesus of Cool, Adam Boyle, and his wife, Kate - like I did, then you too would be able to arm yourselves with a volume of newly gained Spanish football knowledge. Boyle is the Editor of one my favourite football blogs, Ooh Betis. It's rich in wit, verve, information and, let's face it, it has a bloody brilliant name. 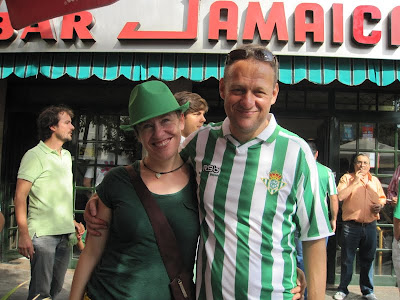 Ooh Betis ... it's Kate and Adam
I met Adam and Kate in a bar at 10:15 (10:15!) on the morning of the match. They're both part of Real Betis' 40,000 or so socios (season ticket holders). It seemed a little strange even by EFW standards to be lowering beers so early in the morning, but well, I was on my holidays. There was countless bars to choose from surrounding the ground, and all of them looked inviting. The ultras all hang out in one street, and make themselves look fairly obvious, so unless you want to get involved in their antics, everywhere is as safe as houses.

Tickets for the match were priced up at €45-90. Incredible when you consider Adam and Kate's season tickets only cost €250. That's unless you fancy it in the away end - that'll only set you back €40. I did actually consider this, it would have been a giggle being the only person in the visitors section, no? I could have pinned up a huge flag declaring the legend 'Billy No Mates'. It's one for the EFW brilliant ideas dept. to consider at a later date. I opted out here because I'd have had a bit of explaining to do to the wife had the police escorted me back to the island of Mallorca after the match. 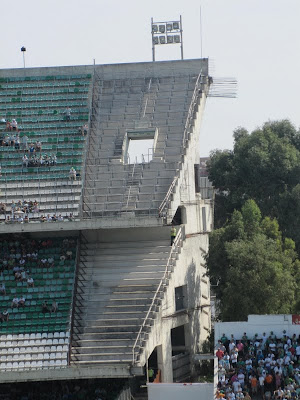 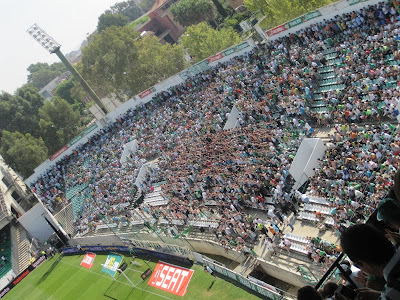 Beeeeti ..... Beeeeti
Individual match tickets for La Liga tend to be high anyway. According to Adam, the politics of pricing at Betis is quite complicated: over the last couple of seasons they've had quite a lot of games when tickets have been heavily discounted, which led to an avalanche of complaints from season ticket holders who grumbled that they wouldn't have shelled out for the season had they of known. Betis pitch season ticket prices relatively low, because they want fans to attend every match, and not just when Barca, Real Madrid and Sevilla roll up.

Incredibly, EFW is quite well known in Spain and my main man, Manolo Reyes at the club had sorted me out a press pass. This didn't prevent the usual Spanish bureaucratic chaos ensuing as I was sent from one gate to another, and met with blank expressions and shoulder shrugs all-round, when trying to actually pick the thing up. I made it in just before the teams took to the pitch and the fans belted out their terrific club anthem. The first thing that struck me was the noise; hugely impressive for a midday Sunday kick-off, not to mention the fact it was hotter than Greece. The fans had been starved of football here for 98 days since the end of last season, and with the strike and everything, so they were just bursting to rattle through the songbook.

Beeeti, Beeeti. That was the second thing. They drop the 's' on the end of words in this part of Spain. So, I've been typing Betis for the best part of ten paragraphs, whereas the fans actually refer to themselves as Beti. My theory is that it's simply too hot for locals to pronounce whole words, hence the shortened versions. No complaints from me.

Brilliantly, there was a giant palm tree running around the pitch. It was the club mascot which, to the untrained eye, actually looked like a giant leek. Around the pitch the palm tree went, leaping like a salmon when the players names were announced. Superb stuff. 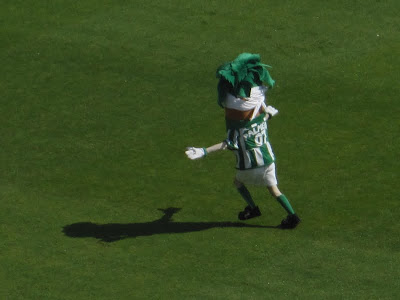 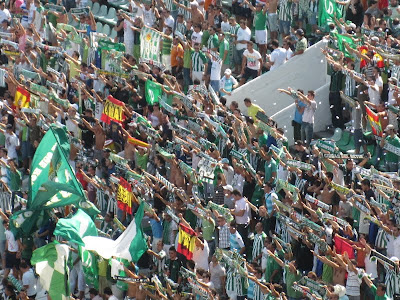 The fans loved it, obviously
Adam has already written an actual match report here, so that's saved me the bother - not that we ever do it anyway on these pages. I will say that on at least two occasions, the main stand that I was in shook to its vast concrete foundations. Once when Betis were denied a penalty just before half time, and the other when the deserved goal finally came just before the end. I was fairly high up in the stand, and I'll level with you, I was shaking with nervous excitement thinking the whole thing was going to collapse around my ears. The place was officially rocking. There was also an incident on the stroke of half time when the laws of physics were broken; Betis hit the post and then the bar twice in the space of ten seconds. I've never seen so many people blow out their cheeks with disbelief at once.

A win for the home side then and a happy bunch of fans back in the bar afterwards. As I type, Betis are above both Barca and hated city neighbours, Sevilla. Giddy times indeed for Béticos, but even when the bad times inevitably come this season - they'll still be around in big numbers. Betis are back were they belong in La Liga - they are a terrific club and they've stolen my heart. Then again, I'm drinking this magnificent mix of coffee and brandy on my balcony overlooking the city writing this nonsense now, and it's very hard not to get carried away with the beauty of this place. You should try it. Adios. 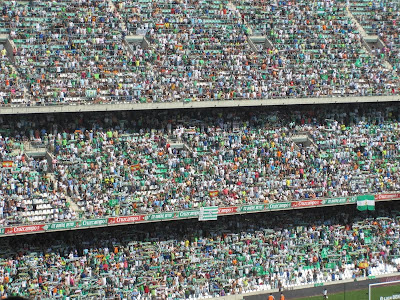 The South Stand where Adam and Kate reside. That's them in the green and white. 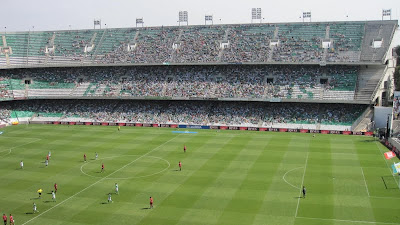 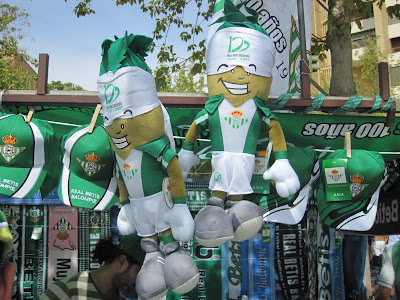 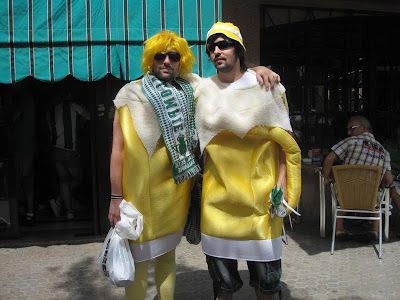 Enjoyed that report enormously. Been toying with a trip to Seville for a while. Hoping to combine a game with a trip down to watch Cádiz CF.

Cheers mate, it really is the bee's knees here. I couldn't recommend it highly enough.

Danny, have Betis moved the away end? It was the other corner we were in (still opposite the 'main stand') when we went last season.

@anon - I presumed that was the away end; it was actually quite hard to tell with there being no Mallorca fans whatsoever. There was another part of the stadium fenced off, opposite, on the top tier, so I guess it could have been in there. I think - apart from European games - Sevilla are the only team to take away fans to Betis, and even then only in very small numbers.

You're right, Anon. If there are going to be more than, say, 100 away fans they get a section on the top tier on the far left of Danny's floodlight (!) pic. 1,300 seats were available to Sevillistas for the derby - and, indeed, had actually been sold - before it was called off due to the strike.

Hi! I´ve enjoyed your report so much. I´m glad you´ve enjoyed your stay in my city as well. And above all, I have to thank you for writting so nice words about my beloved Betis and its fans.

Hope to see you here in Benito Villamarín again