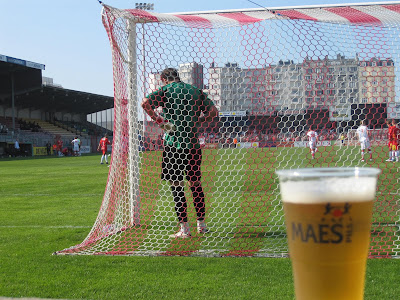 An Ostend knees-up
K.V. Oostende 1-3 Royal Antwerp (17:04:11)
Details are still quite sketchy in my own mind as to why I signed up for this: a day trip to Belgium via France to watch Ostend v Royal Antwerp. But I suppose it's what I do, and whoever made me sign on the dotted line together with forging my old man's signature on the parents consent form need not fear too much retribution. Racking my brains, I think I got carried away with the notion that you can still buy bangers in France. Boom.
This was a combiregeling game. Still only just making their sorry way onto these shores - see Cardiff v Swansea for details - a "combi" is an idea dreamt up by local mayors abroad designed to cause maximum inconvenience to anyone wishing to attend a game of football. Fearing crowd disorder, they instruct the travelling club to only sell tickets to fans who board coaches from one stadium to the other, and any smirking, heavy petting or bombing is frowned upon and results in a banning order being issued.
Being a Spring Sunday in Belgium, the local mayor designated this a combi game because he didn't want families and day-trippers to Ostend suffering at the hands of a rampaging mob of football hooligans. There has never been any trouble at an Ostend v Royal Antwerp fixture in the recent seasons, and there probably never will be. Taking off my cynical trilby for a minute, I'm guessing its close proximity to Bruges made the authorities nervous. If Royal Antwerp ever play Club Brugge again, then I'm led to believe the threat of hooliganism would be a very real one.
We skirted the ticketing issues more by luck than anything else. I've never been paid a single penny for all the nonsense that appears on these pages, but occasionally good things pop in through the internet letterbox at EFW Towers. The delightful Jean De Coster - you know Jean, the chap who runs the KV Oostende ticket office so efficiently, yes that Jean - got wind of our visit, and set aside four match tickets for us. We bought Jean a bunch of flowers for his wife to say thanks. And some bangers for his kids. Boom. 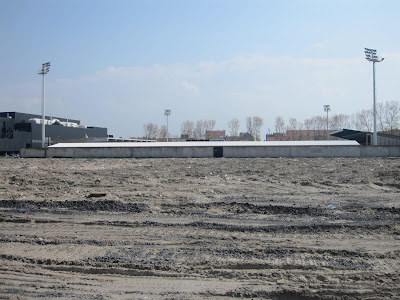 The walk to the ground was a little tricky to manoeuvre
So impressed was Jean that we'd bothered to come to Belgium for this match, that he offered us free tickets to K.V. Oostende for any subsequent visits. That's the sort of service we like.
For this European Football Weekend Day trip we'd opted to travel by Euro Tunnel, and then to drive across a small part of France and up the coast to Ostend. We were delayed twice en route. One of them was a planned stop to legally procure some duty free items. In fact, I'd like to make it abundantly clear that nobody had given me any money to buy stuff, and the four bags off tobacco that we stuffed into the back of the GTC Media car was of course for our own personal usage. The second diversion was, however, unscheduled. Making his EFW debut, Cynical Dave had asked Stuart Fuller to name West Ham's European Cup Winners' Cup squad (1975-76), which he did, but in the process we took a wrong turning and pitched up in Oudenburg.
So what to do for two hours before kick off on a sumptuous day on the coast? Well, we'd forgotten to pack the bucket and spade so we went to the pub. And what a surreal site it was. To our left there were sandy beaches stretching as far as the eye could see with folk in Speedos and bikinis doing their thing. And to our right there were 100 riot police, a water cannon, flashing sirens, cordoned off streets and big poster advertising a new block of flats in the Schitterend of town.
We had arranged to meet our pals from Royal Antwerp, but only a handful of them made it past all the security. The majority of fans were penned in and forced to make their way straight into the stadium. It all seemed rather unnecessary, because the Ostend fans that were present were amongst the most gentile I've ever seen. Ready for a gag? Here we go then.... 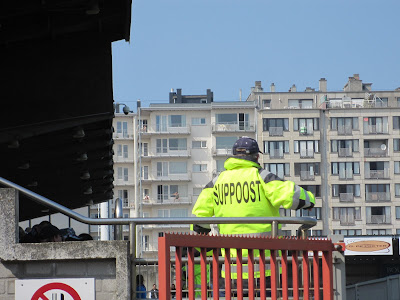 Altogether now: You're suppoost to be at home. Yeeesss. 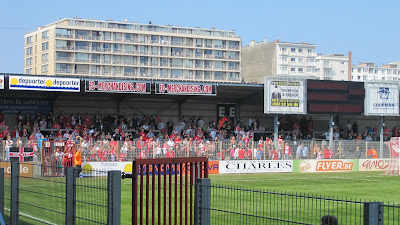 "We're from Antwerp, we love The Great Old"
The Albertparkstadion is one of the more charismatic grounds in Belgium. It has seven stands dotted around, most of which have a bar underneath knocking out strong lager. It's very, very civilised.  The main stand in the ground has a huge bit of piping running along the top of it, and if you squint your eyes, use your imagination, and have had a few beers, it could well pass as version of the Pompidou Centre in Paris.
Team news: Lars Wallaeys injured. That's all you need to know. Lars is the Seasiders skipper. He is the home sides talisman. Their Scott Parker. Their Joey Barton. Without him, Les Côtiers are knackered. And it showed. Royal Antwerp came out with all guns blazing and ripped through their opponents with relative ease. Ostend didn't have their first shot on target until the half hour mark. Two minutes after that - The Great Old took the lead when a Niels Martin long range effort skimmed under Rubin Dantschotter. Just before half time they doubled their lead when, ooh, actually I videoed the second goal. HERE IT IS. 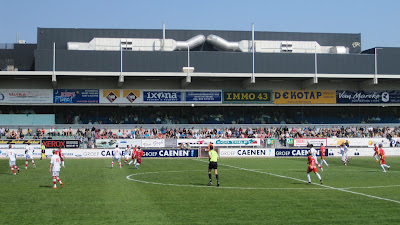 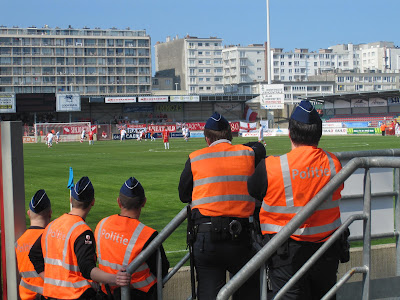 So the police in Belgium wear funny hats. What's the big deal? *stifles giggle
If it's videos of goals you're after, I also shot Ostend's only goal of the game HERE. After the goal goes in, I pan around to the home fans behind the goal. If you watch the video you'll soon realise quite how ridiculous the presence of 100 riot police was for this fixture. Anyway, that was only a brief respite for Ostend, a minute after that penalty went in, Royal Antwerp went straight up the other end and scored the best goal of the game. Kevin Oris scored it, and was probably the best player on show all afternoon. One for the notebook.
On the way back to Blighty, we stopped off to look around the new Stade de l'Épopée in Calais. Calais Racing Union play there in the fifth tier of French football. The club had previously gone into liquidation, so lord knows how they've afforded to fund this new stadium. Not by selling on duty free goods that's for sure, because that's illegal as we all know.
That was my first day trip to watch a match abroad. It won't be my last. If you can think of a better way to spend a Sunday then by all means drop me a line. It was like a European Football Weekend, but without the messy bit attached to proceedings. The bit whereby we drink a little too much and dance to Neil Diamond. Could this be the end of European Football Weekends as we know them? Log onto our new blog: European Football Day-trippers next week, possibly. 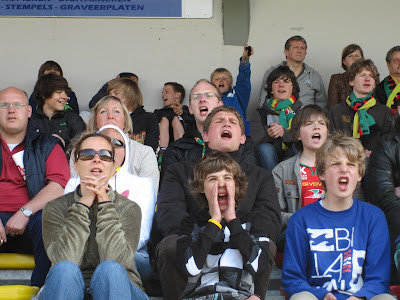 The home faithful shout for new signing Cynical Dave to take their throw-ins.... 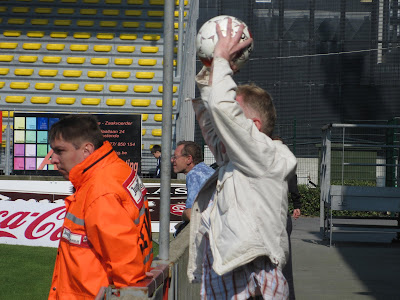 ....ever the gentlemen, he obliges. 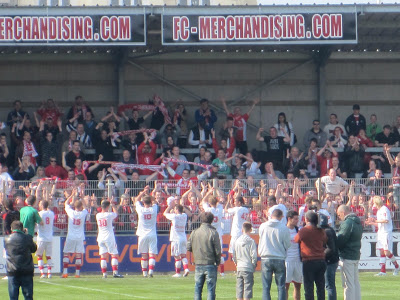 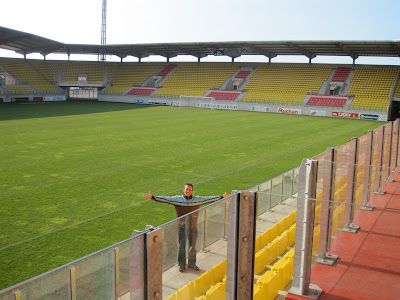 EFW editor last seen in the Stade de l'Épopée, Calais. If found please return home.
Like this? We saw Royal Antwerp play at home a few weeks ago: read all about it.
Follow European Football Weekends on Twitter

Lots more photos from the day
- Feel free to comment below -
Posted by Danny Last at 11:18

Highlights of the match:

"The bit whereby we drink a little too much and dance to Neil Diamond"
I have a video you can attatch if you like.

@Shane - Ah, I think that footage probably belongs on our PPV service, don't you?

After Cynical Dave made his debut EFW trip, we sent a tweet to Graham Sharpe of William Hill to give us the odds of Cynical attending the EFW Oktoberfest in Prague. Brilliantly, he replied:

Another one of the dragonic safetymeasures was the 'perimeter restrain'. Which means that anyone with a stadiumban wasnt allowed to enter the city of Oostende at anytime during the day.

I am an Oostende fan. While I have not seen any live games recently , please know that Antwerp has a bad reputation overall in Belgium and in the past has caused problems in Oostende (witnessed with own eyes). Apparently the recent seasons there has been no issue, but I can understand the mayor for the combi rule. Because, if something would go wrong, the same people complaining about the combi will then be complaining about the mayor for not having taken any security measures. I think it is sad football fans can't just, like in the old days (of which I can also testify ;)), behave even when they all sit together on the same stand. It was much more pleasant before fans had to be separated and all that. But this is the situation as it is, and football fans do have to blame themselves for it, even though obviously the majority bears the cross for the deeds of a small minority. But put yourself in the place of the mayor and then it is understandable risks are to be avoided. Football's tribalist element is the root of the problems. As much as I regret that separating fans and combi rules exist, in the given context the mayors find themselves forced to take such sanctions. For the Antwerp-Leuven game, announcements have been made to Leuven fans to not mingle with Antwerp fans or sit in any portion of the stadium not assigned to Leuven fans ; sad this has to happen when in the nineties title clashes were played without separating fans!

although im a Leeds United fan living in Yorkshire, me and my dad have been going to at least one KV Oostende game every season for the last 10 years now. We both love the place and have made friends with a few KVO fans over the years. Looking forward to returning again soon

Actually, our club has a 15 or 20 quite loyal English fans. Most of them are from the south of England. Some have attended as much as 15 games in a season, nearly half of the league games. While I wonder how they manage financially, it's nice to see a small club like ours has following abroad (even when it's a limited following). :)