Welcome To The Lion’s Lair
Dynamo Dresden 4-0 FC Union Berlin (12:08:11)
If someone asked me to list the reasons why I love football in Germany, I could probably fill up two sides of A4 about the stadiums alone, writes David Tunnicliffe. However, if I was to do the opposite and try and write a list of things I hate about German football, it would contain one, solitary item: Friday 6 p.m. kick-offs. The bane of my existence as a football supporter working a normal 9 to 5 office-type job. A Union Berlin-supporting friend of mine was telling me that even for him as a Berlin resident, it’s often quite tight to make it for kick-off to the Alte Försterei. How are away fans supposed to manage it? One of main pillars of last year’s “Zum Erhalt der Fankultur” fan demo in Berlin was for the DFB and DFL to start organising kick-off times to be more fan-friendly. Currently, three 2. Bundesliga matches take place on a Friday night, with another one taking place on the Monday night - and that doesn’t look like it’ll change in the near future.

One reason to be cheerful at the end of 2010-11, apart from Union staying up only after making heavy weather of it for a large majority of the season, was the promotion of SG Dynamo Dresden from the 3. Liga into the 2. Bundesliga. In terms of Friday night matches, Dresden is the only other city apart from Leipzig (where I live) that I could make it to to watch my beloved Union - and a trip to the “Florence of the Elbe” was one I was looking forward to. Oh, and there’s the small matter of the rivalry between the team, something which is deeply rooted in the GDR days and the use of the word “Dynamo” in their name. My hopes for a more comfortable Saturday or Sunday afternoon kick-off were soon dashed by the authorities, with the match being scheduled for the Friday evening. Right, I thought, no problem - get hold of a ticket, book the handy 4:30pm train from Leipzig and you’ll be sorted. Right? What could possibly go wrong?

On the day of the match, I was continually checking my train’s progress across Germany because, although rail travel in Germany is much more efficient and reliable than back home, there is always a chance that things can go wrong, and especially on a Friday afternoon. Everything was running perfectly on schedule (although trying to concentrate on work was proving difficult) until about half an hour before I was due to leave... there had been a “one-under”, as I believe it’s called in the rail industry, between Leipzig and Riesa and Deutsche Bahn whacked a massive red “+60 min” of doom next to my train on the departure board. Disaster.

As a result, at kick-off I wasn’t singing my heart out in the packed away terrace, I was sat on a stationary train in Falkenberg. Fortunately, I was able to keep up to date with the score on my phone through the excellent 1. FC Union Berlin Facebook and Twitter feeds (including pictures of the dapper Union lot all dressed in red). Arriving at Dresden Hauptbahnhof at about 6:30 p.m., I immediately sprinted towards the ground. In retrospect, I probably should have taken a taxi, but I guessed that I could follow another guy who I’d overheard on the train saying that he was also going to the match. What I hadn’t realised was that this man was Dresden’s very own Usain Bolt and, after losing him around a corner, I hadn’t a clue where I should be going. Fortunately, a couple of nice police officers helped me out and showed me where to get into the away end. Finally, the Rudolph-Harbig-Stadion (or Glücksgas Stadion if you want to say it like an idiot) came into view. 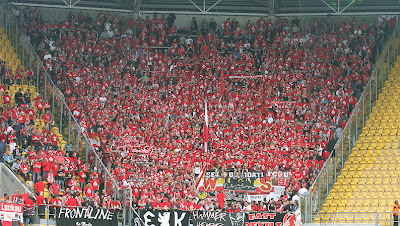 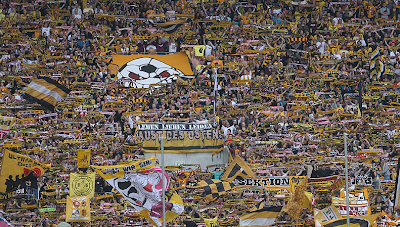 Dynamo Dresden fans in full riot ... of colour (photo: http://www.unveu.de/)
The stadium was rebuilt piece-by-piece during the 2007/08 season from a decrepit roof-less bowl famed for its floodlights, known as “the giraffes”, into a smart, modern box-type stadium. As standard in new stadia in Germany, there is one huge section of terracing behind the goal for the most vocal home fans and/or ultras, with the away fans being housed in the opposite corner in a steep, kind of V-shaped terrace.

To be brutally honest, it’s hard to be complimentary about Dresden fans, for ideological and political reasons, but I’ll try to focus solely on the fan culture. The K block terracing behind the goal is very impressive, as is their slow “DY-NA-MO” clapping chant thing.


They also have a great array of pun-tastic banners such as one simply containing word “Gelbsucht”, which means “jaundice” but literally means “addiction to yellow”. I missed it of course, but they put on another impressive pre-match choreography depicting a scared/crying bear (the symbol of Berlin) with the words “Welcome to the lion’s lair”.

After arriving, I quickly located my friends in the block and got the lowdown on the first half. Apparently Union had been playing OK, but Dresden had taken their chance and led 1-0. As the second half kicked off, Union then had a chance straight away, but Terrode wasn’t able to convert it. This was when things started to go wrong. Dresden had a 15-minute period in which they scored three times and had one (or maybe two?) disallowed. It was difficult to keep track to be honest. Anyway, this knocked the stuffing out the Union supporters and, despite valiant efforts from a number of Union fans in the block, the rest of the match was spent trying to antagonise the Dresden lot about 10 metres to our left. As expected, they didn’t seem to care. I have to admit it, after the final whistle there were some unsavoury scenes from the Union fans, something I never thought I would see. There was booing and whistling at the team and chants of “(Uwe) Neuhaus raus”, which rather conveniently rhymes perfectly. I thought Union fans were different and supported their team to the hilt. I guess this incident should just be put down to pure frustration.

Quite. (photo: http://www.unveu.de/)
I had a more sensible gap between the final whistle and my train back, but I was still anxious to get back to the main station, especially as I was an away fan at a category A match. Dynamo had laid on buses from the stadium to the station for the Union fans, but as I wasn’t going on the football special back to Berlin and I had no desire to attempt to explain to a policeman that I was an Englishman (therefore no German ID card) Union fan living in Leipzig, I decided to walk it. There were plenty of Dresden troublemakers around trying to rub as much salt into the wound as physically possible but, despite a significant number of Union ultras leaving the ground with a minimal police presence, things were kept under control. I zipped up my jacket (thank god I had brought that with me) to hide my red T-shirt and hot-footed it towards the station. Again, the majority of Dresden’s fanbase is not exactly pleasant (although I’ve met some proper sound Dynamo fans before) so I followed that time-honoured advice of keeping my mouth shut and getting on with it. Dodging the skinheads and the bemused groups of Japanese tourists, I got a great view of the police trying to separate the two sets of fans. There was posturing on both sides, but it largely remained trouble-free. ‘Till next year, Dresden.

Like this? Then Hertha Berlin v FC Union Berlin is probably for you, too.
Dave Tunnicliffe is the Editor of Ostklassiker
Follow Dave and European Football Weekends on Twitter
Posted by Danny Last at 11:05

I knew about the rivalry between FCU and Dynamo Dresden, but I didn't realise Dresden had the same unsavoury image as BFC. I don't think any ex-GDR club is completely free of that sort of element in its support though. Obviously some are worse than others, but I've seen a few Thor Steinar shirts at the AF. I think the Hertha-Union fan friendship in the 1980s occasionally involved Hertha fans from the Hertha-Frösche and 'Zyklon B' fan groups as well.

I think Friday night games are brilliant if you can actually get to them. But it does seem unfair on supporters, especially away fans. I was impressed by how many had been able to make the trip from Paderborn the other week. Or how many Paderborners work in Berlin and were able to duck out early.

Really interesting post, a Union away game is definitely something I want to experience at some point.

What does supporting a club have to do with politics and/or ideology? If that's the case you'd have to condemn half the football fans in Eastern Europe.

Because club culture, especially in Germany but Europe-wide, tends to have a huge bearing on how fans perceive themselves. It's not always accurate, and as I said in my reply a club like Union who are generally quite alternative also have a small right-wing element.
But other clubs, such as BFC and Lok Leipzig and apparently also Dresden in Germany, Lazio in Italy, Beitar Jerusalem in Israel and so on, are well-known for their right-wing fans.
A better question would be, what is football without the cultural, ideological and political context?
MK Dons

Giovanni, it depends where you watch football really. In the UK it's not so much of an issue, but the reason I support the club I support is because I'm not that keen on being surrounded by people singing about building an underground from St Pauli to Auschwitz, for example.

@Tom. Yeah I've seen a fair share of unsavoury characters at FCU, although the proportion is considerably lower than that at, say, BFC (urgh). I remember reading an interview in 11Freunde once with someone (vague, I know) who said that pretty much the only place in the former East where you wouldn't find any Neos would be Jena.

Well, to be fair, many Eastern German clubs are doing their best to push out the unsavoury fan groups (after many years of doing nothing). Afaik as I know, there has been no problem with Dresden fans yet this season.

No problems yet, but only because they've all been threatened with stadium bans and the main sponsor threatened to pull out.

There are plenty of examples from last season