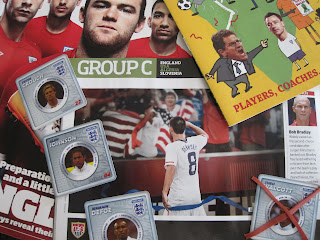 Florida gets set for the big one

by Ian Clark
As June 12th approaches it would be fair to say that I'm in a minority of one (well two actually if you include my Chelsea supporting colleague) in Jacksonville , aka "The Bold New City of the South , to be utterly consumed by the forthcoming England vs USA game. For an ex-pat in Florida this draw was heaven sent and I have talked about little else at work for the past nearly six months which I'm sure has sent the tedium factor through the roof for my colleagues but they are far too polite to point this out.

Now Americans get a mixed press at home I know but having lived as a guest of Uncle Sam since 2004 I won't hear a word said against them with the exception of their obsession with sports which are , to put it politely , silly - with all due respect to the Connecticut Seagulls who are regulars at Fenway Park watching a spot of rounders. In fairness I should also point out that the NE Florida branch of Brighton & Hove Albion's huge Stateside support have become fans of College Football but happily that can wait until September.

The fact that England's opening game is at 2.30 in the afternoon local time on a Saturday is just icing on the Dunkin' Donut (America runs on dunkin according to a chubby and intensely irritating minor TV celebrity on this side of the Atlantic - who would have thought that it's possible to be even more hateful than Anthea Turner?). Anyway invites have been issued , tacky St George bunting by the (Gary) bushel has been delivered and all that remains is to buy the beer and prepare Toad in the Hole and Shepherd's Pie on the day for our American guests. In a bid to prove that American humour isn't an oxymoron someone memorably quipped "it says here English food will be served - so I should eat before I come then?" on reading the invite.

I suspect that there are local plans to undermine my attempts to turn my house into something that wouldn't look out of place in one of those pictures The Sun like to publish of a semi in Dagenham but it will all be in good fun I'm sure. Amongst the tack provided by my brother-in-law on a recent family visit were two St George Cross supporters capes. Aside from the fact that in over 30 years of attending matches I've never worn , or seen anyone wear , a cape I'm unsure about how prudent it would be to wear such an article in the Deep South so might pass on that one. Car flags will be flown , balloons will be blown up and in general it will be a veritable cornucopia of St George paraphernalia in leafy St John's County that day. 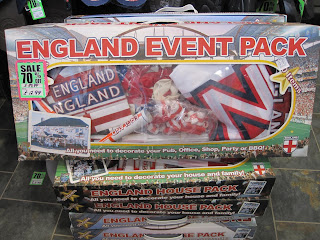 Watching some of the warm up friendlies recently my glee at the comedy defending from the home team in the 4-2 trouncing by the Czech Republic tempered by the fact that those cunning Yanks apparently played their ressies (who it would appear would be hard pushed to get a point at the Dripping Pan) and the fact that England were particularly bobbins against Japan last week but we can't lose against Team USA surely can we?

With the right result I will make a point of driving around my neighbourhood blaring the horn like a Fluminese Ultra to the utter indifference of everyone else who lives here before reluctantly making a start on the Bud Lite Limes which with a depressing sense of certainty I know my guests will bring with them. A defeat or even a draw is unthinkable and would make my life a living hell for the next umpty thrumpty years. As the game draws nearer I'm fighting a nagging doubt that I might have brought that fate on myself by mouthing off constantly about just how badly the USA are going to get crushed but it's too late to do anything about that now. If it does all go tits up Fabio it's my fault ok? Or more likely an unbelievably calamitous cock up by David James.

On the off-chance that any North Florida based England fans read this and feel like helping to even up the numbers a bit that day get in touch through this blog. I can promise home cooked English food (which is a treat actually Mr Randy Bloody Schwarnstein the Third or whatever your name is!) , bad taste decorations and a ready supply of proper cold beer along with the dross that the rednecks will bring with them!

Where will you be watching the big match?
- Feel free to comment below -

Mr Clark,
Please start thinking of your excuses now (the ref blew it, James sux etc..). The Mighty England will fall yet again and you still will have no World Cups in your lifetime...

You better pray that the US doesn't win! We won't leave your house until Monday morning if that happens!

Bud Light for all!

If you want the honest truth from EFW Towers, I think the USA, USA, USA are a cracking little bet at 13/2. En-ger-land are always likely to concede and it wouldn't be the biggest shock in the world - would it?

Screw bud light limes, Im bringing Yeungling! A real American lager. The day is almost upon us, your lucky Brian "the Hawaiian" wont be dressing for the US.
Chelsea through and through, but I bleed red, white and blue!

You might be interested to know that the USA! USA! USA! entry in the Cup of Good Hop (www.cupofgoodhop.blogspot.com) is Sierra Nevada Glissade. Have you tried it?

Whilst I'm on I think it's about time we made our predictions don't you. The official EFW prediction is:

Sitting on the fence ala Trevor (ball in the stanchion) Brooking maybe but that's what I think so there.

Haven't had Sierra Nevada Glissade but their summer lager is very drinkable. Perhaps I'll get some in for Saturday.

Suprisingly accurate prediction, bar the name of the keeper.