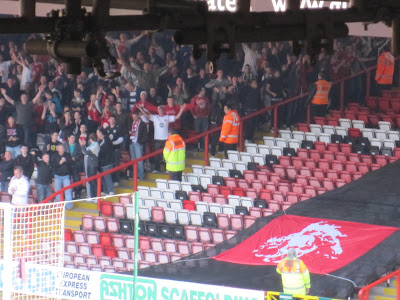 The Robins aren't bobbins anymore
Bristol City 2-0 Burnley (19:03:11)
If cheeky celebrity Bristol City fan Justin Lee Collins really want to bring back the good times with an agreeable bit of programming, he could do worse than to reunite the legendary Robins team from 1979. I'd Sky+ Bring back....Bristol City starring Clive Whitehead, Trevor Tainton and Gerry Gow (of course Gerry Gow) and no mistake.
I've always associated Bristol City as one of the giants of the game. Ever since I had my first football and their name was emblazoned across it in print as one of the best 20 teams in the country courtesy of plying their trade in the 1st Division. Even though it swerved in the wind a bit - it was a goalkeepers nightmare - and it burst at the mere site of a prickly bush, I loved that football.
Now, where were we? Ah, yes 2011, and the famous Robin on their club badge has been replaced by a couple of camp looking unicorns. Tsk.
Ashton Gate could be the next thing to go. Sainsbury's (of course Sainsbury's) plan to redevelop it whilst the club will move to a shiny new 30,000 seat stadium at nearby Ashton Vale. Bristol is a city united, and wants a world-class stadium not a 'village green'. The clubs words, not mine. As a Brighton fan, I know all too well what they'll have to go through. In fact the chief-executive of the Seagulls, Martin Perry drove to Bristol recently to support City's cause for that new stadium. Well done him. 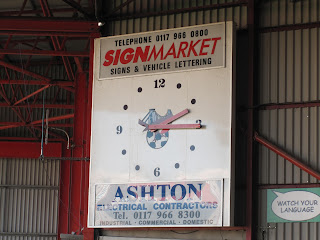 Time running out for Ashton Gate? 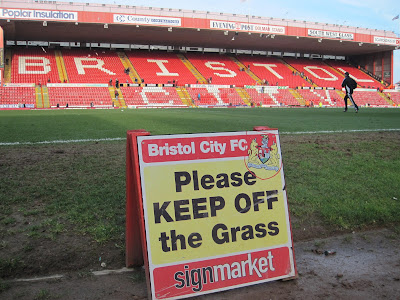 Next stop Ashton Vale?
Shamefully, this was my first visit to Ashton Gate despite visiting just shy of 250 other grounds. Luckily, James Healy from the clubs media department would be on hand to take me under his Robins wing. He actually supports Yeovil Town, but don't let that get in the way of a good story. James is one of the good guys and gives great insight into the club from his personal Twitter feed. You want a 360 view of the boardroom, the away dressing room and free press pass giveaways from around the country? Then follow @Jimmer84.
I arrived in town shipshape and Bristol fashionably early. EFW like to factor in at least a three hour time safety cushion for football matches allowing us to handpick the best pubs in town beforehand. First up was the Tobacco Factory a short walk from Ashton Gate. It's the sort of pub that entertains the notion of life drawing (1st Monday of each month), live music, comedy, theatre and pints of Sun Ale from the local Bristol Beer Factory. Pie and mash on the menu? Probably not. This is more of your Cornish scallops, smoked bacon & peas on a bed of baked tomatoes & celeriac remoulade type establishment.
Spare a thought for Burnley fan Howard, whom I met in that pub. He'd travelled thousands of miles watching his team on the road last season for the princely return of one win - at Hull. He told me that everyone in the towns of Burnley and Rossendale support the Clarets. 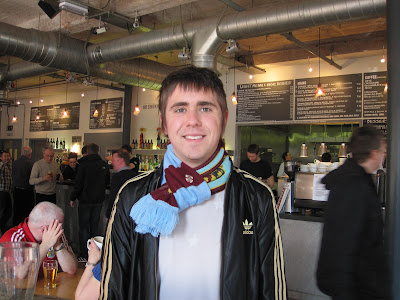 Burnley till he dies. Loyal supporter Howard in the Tobacco Factory. 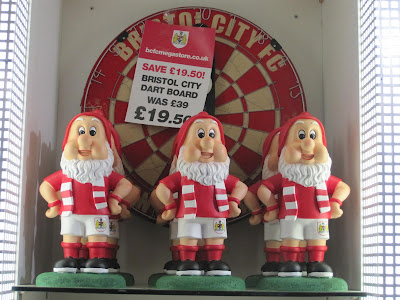 No place like gnom.....[Snip, not that gag again - Ed.] And yes, of course I bought the dart board.
Even another beer in the Coopers Arms - a bit less salubrious - next to Ashton Gate couldn't tempt me into purchases a BCFC foam hand (foam hand!) that the local paper were knocking out for 50p a pop.
Upon arrival to the ground I was escorted to the luxurious surroundings of a portakabin opposite the away turnstiles. This is where the press pack hang out prior to the match and quaff chicken balti pies by the bucket load. After that it was across the way, up the stairs to the back of the old main stand, and into the press box sat between Tony Colliver from Sky Sports and a chap from the News of the World. 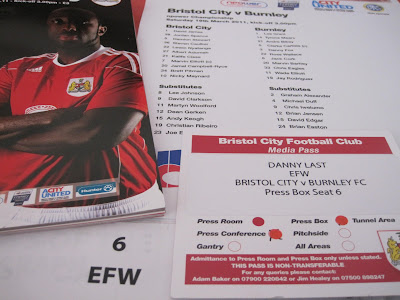 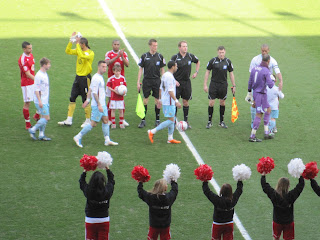 Cheerleaders pom pomming, tick.
Burnley were strangely lackluster. Left back Danny Fox was booked early on, and alongside him Andre Bikey had a game to forget. City threw everything down the right utilizing Albert Adomah's electrifying pace. He's surely the best signing Steve Coppell brought to the club during his five minute stint. The visitors most skillful player, Chris Eagles left his box of tricks back in Lancashire, and his magic for the afternoon was replaced by that of pint-sized class in a glass, Jamal Campbell-Rice.
And then there was the strike duo of Brett Pitman and Nicky - best striker outside of the Premier League - Maynard. City have now won 6 out of their last 9 games, and the return of Maynard after a long-term injury to partner Pitman up front has been pivotal. They both scored and they were both superb. Man of the moment Maynard is pure quality, especially when his confidence is up and right now it couldn't be any higher.
Next to me in the box, Tony from Sky was cross with himself for taking too long to report live back to Sky after the first goal. "You've got all day to file your report," he said, "I live or die in eight seconds." I calmed him down by offering the one statistic I'd save up and hoped to use: Pitman's goal was the 1500th Burnley had conceded in the second tier of English football. Back of the net. 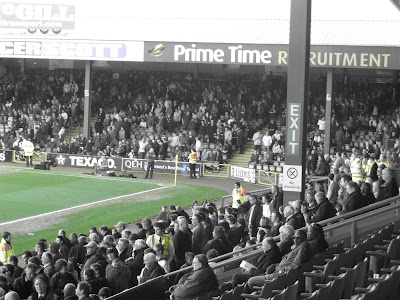 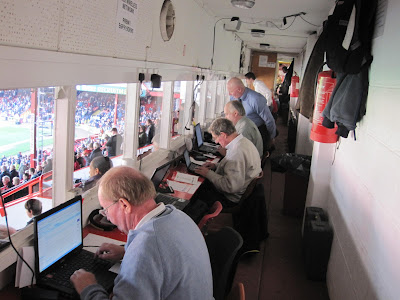 The EFW office for the afternoon.
After a quick dance to The Wurzels (no really), I headed across the pitch, down the players tunnel, past the dressing rooms and boot room and into the club gym for the press conference. The other hacks seemed rather blasé about wandering around behind the scenes all willy nilly, but this was boyhood dream stuff for me.
It was here that I met Nicky Maynard. He was being peppered with questions and told us his Nan had recently died, and that the goal he scored was dedicated to her. To lighten the mood I reminded him of his over the top celebration for a goal that was subsequently disallowed for offside - which it wasn't. "Yeah, I didn't think it was off, otherwise I wouldn't have run around like an idiot." We all laughed.
My only regret was not bumping into Gerry Gow. He sometimes turns up at games, but wasn't at this match. I was told he like a beer nowadays, but can confirm he wasn't in Llandoger Trow, The Old Duke, The Apple or Zero Degrees knocking back brain rotting local cider. That was our job for the night. I'll Just have to leave it to Justin Lee Collins to contact the Gowster when he brings back....Bristol City. Ooh arr, me 'earties! 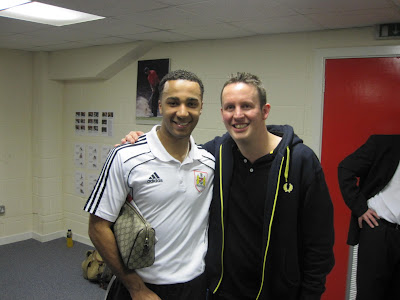 A few million pounds worth of talent alongside Nicky Maynard. 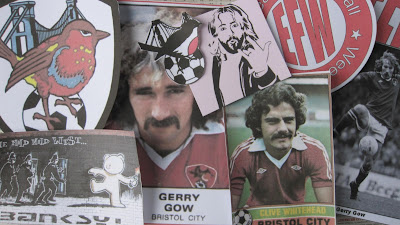 Bristol legends. Talking of which..... 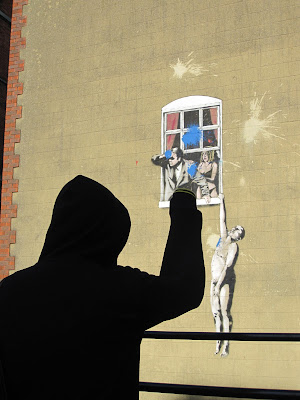 Could it be? Surely not?

For lots more photos of the day CLICK ME.
- Feel free to comment below -
Posted by Danny Last at 22:31

Loving the Sidie reference... assuming it was intentional! :-)

It only lacked my favourite "poorly-judged pun" ;) - to be used when the Robins are beaten in a Cup game: "Bristol's out!"

Loved the Howard pic. But with that slight look of desperate pleading in his eyes, the sturdy air-con pipes above and the tight noose around his neck, it rather seems like the "before shot" on a strangely upbeat suicide site :S

Oh, and the "first ball" reference! Must you? My keyboard is crackling from my tears and moucal drippings as I yearn for a lost childhood. Our first ball (I always had to share with my stupid brother) had all logos and colour kicked off it within weeks. It was a naked classic that soaked up water and mud becoming twice as heavy after a standard eight-hour kickabout. Jumpers for goalpasts? Grazed knees? (Shurely "graséd knees"? Ed.) Isn't it? Isn't it?

Bristol Titties seems a lot like Town, actually. We have our Gerry Gow (our GEP - Greatest Ever Player - Kevin Beattie, who is almost ALWAYS present; I'm allowed to call him Kev these days); blaze hacks (Shurely blasé? Ed. Actually no, blaze is better ;P) and on Saturday I had a similar experience to yours with the boy Maynard, as recorded in an e-mail to my 11 closest ITFC fitba pals:

"Well, thank Allah (peace be upon him) for that. Like Dustin Hoffman in Running Man I was loath until now to say our team is safe:

But it seems the Iron may soon return to their natural habitat and not be dragging Tow-en down with them.

A fairly cheerful P*rnographic Paul popped up next and told the p!ssed hacks present he'll now be after people to sign contracts. I liked the fact that to the question: "Don't you think Connor is maybe too young and inexperienced to play up front alone?" he simply responded: "No" to sniggers. Equally, when asked: "Are you itching to carry on playing rather than having the international break?" he replied: "Nah..."

Then who should appear but the Man of the Hour himself, James "Jimmy" Bullard, who seems much smaller and younger-looking in real life. And what a thoroughly bloody nice fellow he is. Almost too self-effacing, he feigned being impressed by the professional-looking ITFC dias and sounded like some kind of apprentice to the Krays as he peppered his chat with stuff like: "Yeah, I 'ad a lot of family in the stands today so I'm glad I done well." They calls 'is mum The Duchess!

Moreover, he said he already
loves Hull and Tow-en in equal measure and would happily end up at either. Perhaps more importantly he stated: "Money isn't everything..." a phrase D Allard made him repeat eight times so he could write it down neatly on his giant pad.

I stood on the sidelines, beer in hand, as the Bully won over the dozing scribblers in less than a New York minute (P Ham had been kissing his ring and gushing like a schoolgirl from the get-go, of course ;)) D Davis made himself a few quid by capitalizing on the Bull's England caps to ask him what he thought about JT being reinstated as captain.

Towards the end, he was entering the realms of high-irony when he was asked if he thought the Martin incident was a pen and said: "Nah, 'ee dived, dinee? It was all ball!" I made a little, jolly "nooooo!" at which the Bull shot me a glance (perchance a wink?) that seemed to say: "We know what's going on here don't we, mate? You wiv yer beer and everyfing..." and left me feeling like the little kid in the Coke commercial....

Look behind the goal.