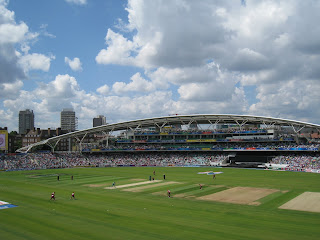 I know, I know: 'there is more to life than football Danny Boy', for example cricket. I don't like cricket - oh no - I love it and what's not to like about four of the best teams in the world pitching up at The Oval for a day of hit and giggle!?

Now, if you and I were to meet in a posh hotel over a large port or two and put on our (slightly posher) cricket voices for the afternoon, I'd probably drone on about the fact I like my cricket best served over 5 days in the form of a test match. However, I do accept that when Chris Gayle plunders 27 runs in one Brett Lee over that you, me, Paul Weller and every man and his dog are entitled to scream 'that's entertainment'.

So how did EFW and BIR end up having our end of season work do here!? Well, EFW and BIR are owned by the GTC (media group). The ICC after consultation with the ECB decided to let EFW and BIR join the likes of the BBC, TMS and SSN and issued us all with some press passes. Simple as really.

Prior to this Super Eight match, there hadn't been to many shocks in the World Twenty20 group stages. All the big guns had progressed; India, Pakistan, South Africa etc and all the minnows had exited - stage left - early doors; Holland, Australia, Bangers etc

Seeing as I was in the press box for the day, I thought I'd best jot down some notes. So whilst those around me started unpacking their laptops and speaking into cameras/microphones, I sheepishly unveiled my pathetic recycled notepad and newly sharpened pencil and came out with the following highlights/lowlights from my day:

Press Box 11? Don't mind if I do. Upon entering the media section at The Oval I was told that the actual press box was full and as a result I'd be in the overflow area which turned out to be press box 11, pretty much the best seats in the house. Free food and drinks, desks and a window that opened out onto our own balcony. Nice. Very nice in fact. 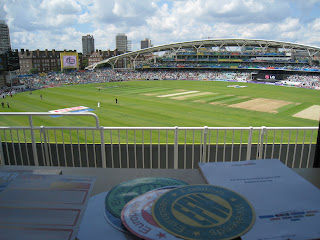 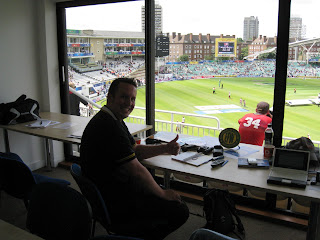 The EFW office for the day. Not bad eh!?
The ICC World Twenty20 England 2009 Statistical Package. This free hand out to the press will provide me with my bog reading for the next eight months. Ahem; in the history of International T20 West Indies have won the toss and elected to field four times. They have won three of those four matches. That stat is on page 1 (one!), there are 49 (forty-nine!) pages of this stuff. Heaven.

Rishi Persad. Rishi is presenting the highlights for BBC2 during this tournament. He was in our box for the morning and was happy to enter the EFW Hall of Fame. He regaled us with witty anecdotes and a very passable impression of Aggers which reduced me to a fit of the Tuffers giggles. 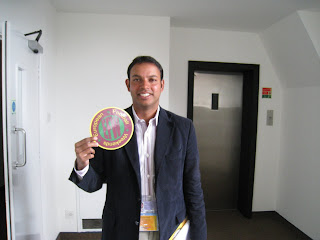 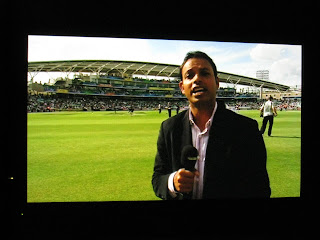 ....and then entertains the watching millions.

I didn't get to meet my heroes. There is a school of thought that says you should never meet your heroes in case they turn out to be a radish. So I can sleep safe at night still thinking that Aggers, Blowers and Bumble (who were tucked away on the other side of the press area) are top draw. Unlike Nasser Hussain by the way, more of him later in the lowlights section.

At precisely 12:56 I helped myself to a free danish pastry. Again, what's not to like!?

Press pass the size of a bus (tick).

The Oval Hum. You can't beat cricket for a good 'hum' around the ground. As play commenced 23,500 excitable conversation took place culminating in a crescendo of noise upon the first swish of Graeme Smith's enormous bat. You only get this at cricket and I love it.

The South African fielding. Professionals at work or what!? They were like tigers in the field, running here, there and everywhere, backing up, backing down, running backwards, pirouetting. The star of the show was AB de Villiers fielding at backward point. Watching great athletes perform at their peak is worth getting up for.

New Kids on the Block. We arrived expecting big performances from Brendon McCullum, Chris Gayle and Shahid Afridi and we departed purring about Wayne Parnell's inswinging yorkers, Lendl Simmons big hitting and man of the day Umar Gul. Gul bamboozled the Kiwis with his reverse swing recording the best ever figures of a T20 International in the process. Five wickets for six runs in three overs. Outstanding. 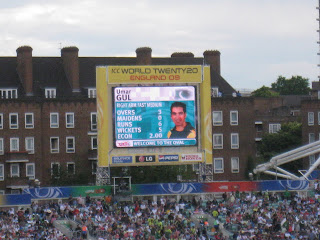 The Oval clock. I don't want to start getting all misty eyed about a clock *eyes fill up with mist just thinking about it* but they've put a bit of effort into their clock and I for one appreciate it. 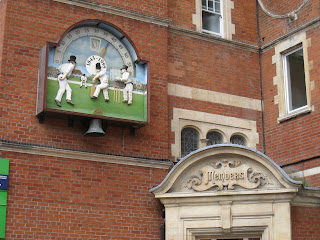 Misty eyes across the nation - it's The Oval clock.
Derek from Super Sports South Africa and Emmet from the Irish Times. Very pleasing to know that there are guys in the media who are generous with their time, friendly and extremely good company. These chaps shared my box for the day and I salute them. In between running onto the pitch to interview South African players Derek fondly recalled his curry eating competition with Wayne Parnell. Cheers lads. 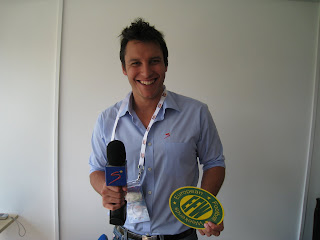 Derek. Presenter with Super Sports South Africa.
Mini chicken and mushroom pies with herbs (herbs!) handed out in the box willy nilly just before the end of the South African innings.

Chris Gayle's shades. Only he can pull off wearing a pair of yellow rimmed sunnies and still end up looking Daddy cool. 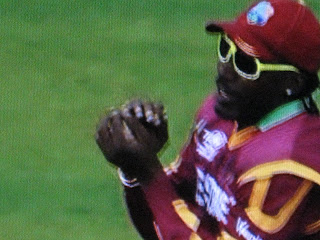 Daddy Cool
Rudy Kirsten. The job of the third umpire must be one of the best jobs on the planet. During a 'tv referral' Rudy was given the task of either hitting the 'Out' or the 'Not Out' button after seeing umpty thrumpty replays in slow motion. It's not hard is it!? Kirsten hit the 'Not Out' button in error on one occasion. Tucking into some mini chicken and mushroom pies (with herbs) were we lad?

Enterprising West Indies fans. Two blocks of them watched their match with South Africa and then softened the blow of seeing their heroes lose by walking outside and selling on their tickets to some very enthusiastic Pakistan fans for the following game. Not strictly speaking legal but a situation that ended up with everybody being happy. Just as we like it.

No such thing as a free lunch eh!? In between matches I helped myself to a plate of the following; lemon sole, chargrilled vegetables, pasta, posh bread (with optional butter, yes please) and a selection of cold meats. Jesus H Christ you could have even had Salmon! 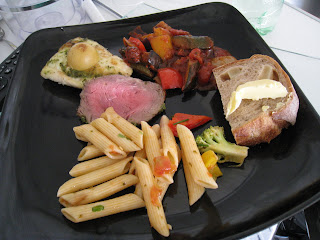 Seven overs into the New Zealand innings. Sun shinning on a full house at The Oval, best seats in the house, Boom Boom Afridi bowling, Styris launching sixes into the crowd, can life get any better!? Yes it can. News filtered through that the Dutch had released their fixtures for the 2009/10 season. There is a God. Mental note to self 'Must organise EFW Oktoberfest'.

Due to our high vantage point we could just about make out bendy red buses going down the Harleyford Road. One for Blowers.

Talking of Blowers (as I often do), he would have loved the 50 or so pigeons who enjoyed their day enormously on the outfield. They were only briefly disturbed when Boom Boom sprinted twenty yards, running backwards (backwards!) to take the catch of the day to dismiss Styris.

The waving of the white flag. Despite half promising to myself that I was going to have a beer free day, I didn't quite manage it. Mr Fuller and I cracked and relaxed the no beer policy by popping next door into one of the empty executive boxes. We sank a couple of pints and watched Amar Gul's record breaking bowling spell returning only after he'd picked up his fifth wicket courtesy of a leading edge from Kiwi Kyle Mills.

Braaaaavoooo, Mooooorrrkeeel, Affffriiiidiiiiii. What you don't see on the telly is the fact that the crowd adopt the player fielding next to them as their own. Players love it/milk it, fans love it and cult status is assured for the day. Good old cricket.

Maybe I'm a victim of TMS (Test Match Snobbery) but I'm no fan of artificial noise in sports stadiums. Clappy sticks and hooters should be'filed under bin' and whilst I'm dispatching things into Room 101, can you make room for those giant cardboard Pepsi Max hands!? Many thanks. 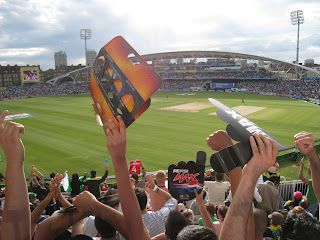 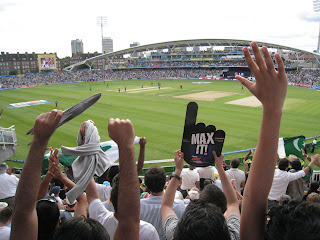 There was a time when a boundary was greeted with a ripple of applause and the occasional cry of 'lovely cover drive old chap'. Fast forwards to 2009 and you get an ear piercing blast of Song 2 by Blur, dancing women and men on podiums and more clappy stick/hooter noise pollution. I'm obviously in the minority here because the crowd lapped it up all day long. (yeah get with the times Grandad - Ed). 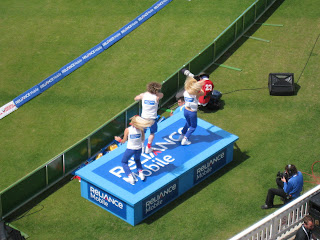 14:12. 42 minutes into play and the mexican wave starts up. Runs coming at 9 an over, shots flying all around the ground, dropped catches, thrills and spills aplenty and yet we feel the need to engage in the mexican wave. Erm...why!? 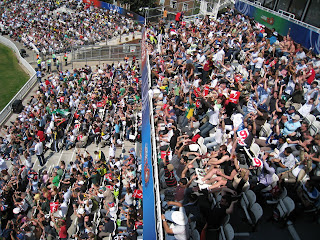 Can we not wave goodbye to this?

Chris Gayle and Brendon McCullum out for 5 and 12 respectively. Crowd denied some biff, bang and plentiful amounts of wallap. shame. 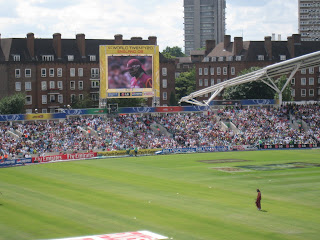 Gayle departs for just the 5 runs.
The Hall of Shame. Here we go then. We've only ever been refused two photographs with the EFW logo in our lifetime. Once was a very moody Steve Harmison and now we have another entrant. Step forwards Nasser Hussain. Picture the scene: midday at the Oval with barely a sole in sight. I politly ask Nasser for a word. 'What do you want?' came the reply complete with a frown the size of bus. A quick photo for the website please Nasser. He couldn't have walked off quick enough. Too big for your boots are we Nasser!? Up your own arse are we son!? Think you are bigger than Jesus do we!? Won't do anything unless you are told or moreover paid!? Lost your sense of humour have we!? Shame on you. Actually, I still quite like him. 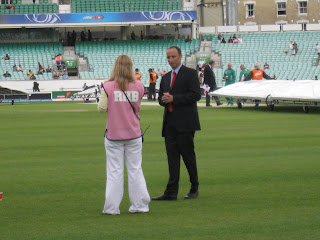 Didn't mind chatting to the blonde though did we Nas!?
So that is it folks. Before you come complaining in your thousands that there was no football involved in this story. Let me tell you right here, right now that in 1872 The Oval staged the first ever FA Cup Final. Tenuous maybe but there you go. Carlsberg don't do work do's........

More photos from the day anyone!? Oh go on then: 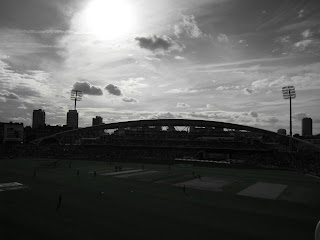 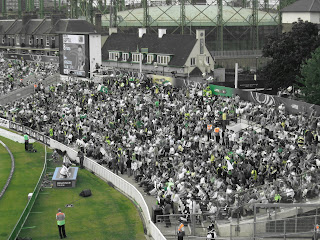 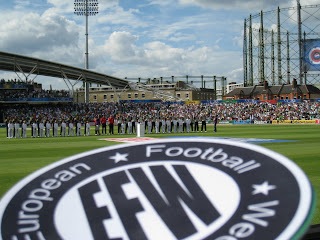 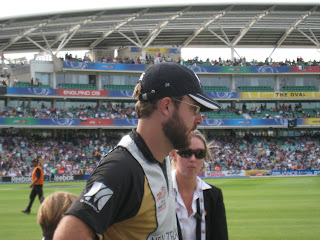 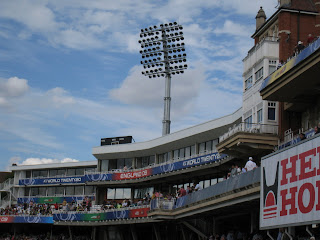 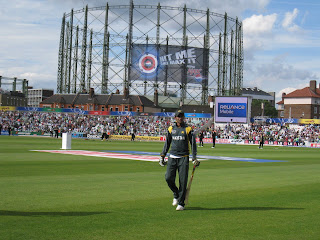 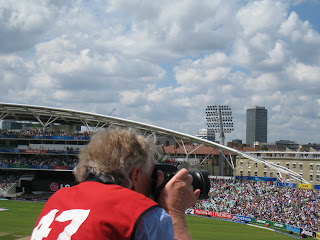 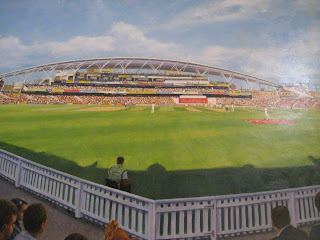 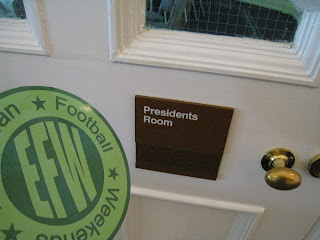 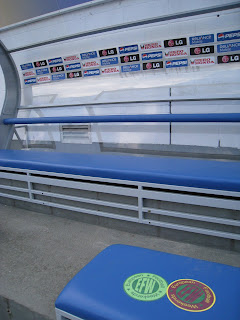 This is the easiest way to earn in dollars per month by sitting at home. If you are interested please visit our website

Hey ! Genuinely it’s really possible to earn money online; I really felt that this website is quite impressive and a great idea to earn hundred’s of Dollars daily.

Thanks mate... just dropped by. Will look for BIKE STN when we get to Seattle. Still in Buenos Airies.