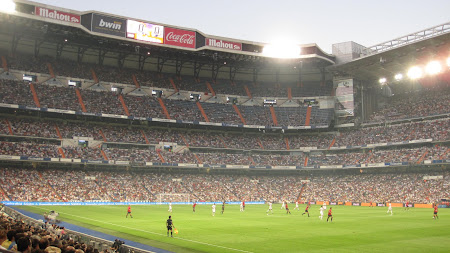 La Noche en Blanco
Real Madrid 1-0 Osasuna (11:10:10)
It took less than the time it takes for the board to revolve for me to put pen to paper and sign up for three Spanish European football weekends in a row. It wasn´t all going to be about futbol on this trip, but you know, I quite like it and that.

First up was a return visit to the Bernabeu to see Jose Mourinho try and maintain his record of not having lost a domestic home match for around seventy-five years.

I was hoping the match would be a little more entertaining than the pre-match blurb. It would be very easy to lay the blame squarely at the feet of Real Madrid winger Pedro Leon - so lets do it. His press conference beforehand consisted of the following "It won´t be easy. I am sure it will be a difficult match and they [Osasuna] will give us some troubles. We need to focus on ourselves. We just hope that we do well in our next match, as well as those that follow." And people ask me why I prefer to interview football journalists rather than players.

Prior to the match, my wife and I sank a few beers in a museum - as you do. The Museo de Jamon has got a little more touristy over the years, but any place that sells over 100 varieties of ham and cheese, and has a few stalls around a bar which knocks out beers for €1 a pop gets my vote. 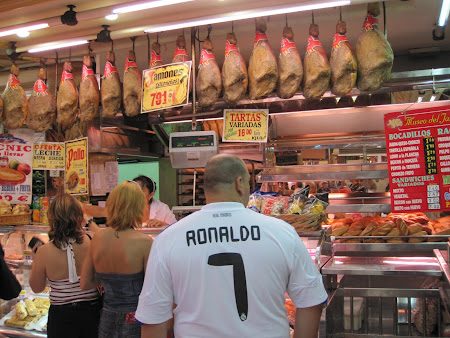 Look who joined us in the Museo de Jamon.
How do I get a ticket to see Real Madrid is a question I get asked all the time. Well, aside from the Barcelona match (impossible I´m afraid, unless you have very deep pockets) it´s not too difficult. The official website now has a very user friendly ticket option, but I thought I´d take my chances outside.
Match tickets start at €45 if you fancy watching the action unfold in the 4th tier, and rise to a whopping €100 for a pitch-side seat. With individual match tickets costing so much, a season ticket makes perfect sense, and they can be brought for as little as €226. With this in mind, lots of socios choose to sell their tickets on match days and make a tidy profit in the process.

I was lucky enough to met a chap called Jose outside (Jose? You couldn´t make it up - Ed.). Jose sold his season ticket to me for €35, and with a swipe of his credit card I was in. I´m unsure as to whether this was all above board, but this wasn´t really the time for questions. I got my head down, made no eye contact with security and plonked myself down in my seat, ten rows from the front of the action. Lovely.

How to make 25 instant new best friends in the Bernabeu Part 1: Tell those around you that Barca are about to lose to Hercules at the Camp Nou. I did this, then several minutes later it was confirmed on the big screen, and the quizzical looks I´d previously received turned into pats on the back. 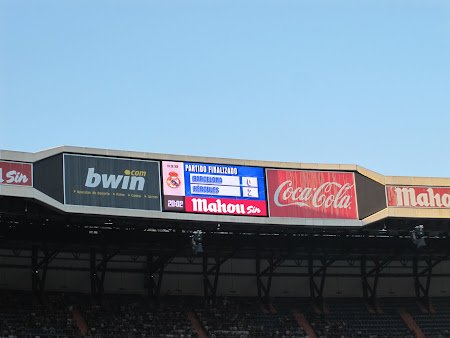 Rub yer eyes and look at that. Barcelona 0-2 Hercules. Gulp. 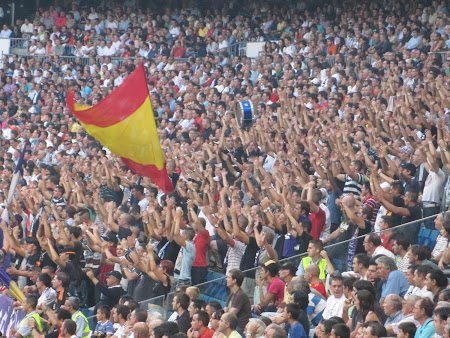 The Ultras Sur not too disappointed with events in Barcelona.
The Ultras Sur struck up with a celebratory rendition of the Barca anthem, with a slightly alternative ending of "Barca, Barca, MIERDA (shit)". The rest of the stadium just clapped along politely and blew the odd vuvuzela.

Seeing as this was Mourinho´s first game in charge, I was fairly surprised with the muted reception he received as he emerged. In fact, returning Osasuna coach Camacho - who spent fifteen years as a player here, as well as a couple of brief stints as coach - was welcomed back with much warmer applause. Evidently, you have to earn the respect of the crowd at theBernabeu. Reputations, and they´ve seen a few come and go here, count for nothing.

As it happened, Cristiano Ronaldo did play. He was absent for the midweek internationals due to ankle-knack, but in a nod to Ryan Giggs, he made a miraculous recovery to play for his club. TheMarca newspaper has taken to calling him CR7 this season. That sounds like something out of Star Wars to me. He loves to strike a pose, but during this match, there was nothing to it.

The Bernabeu crowd are notoriously hard to please. And when Khedria dragged a shot wide just before the break, out came the white hankies and wolf whistles. This wasn´t good enough.

Last season, Real Madrid announced a record income of €442.3m. The official website accidentally forgot to mention that they´re still €244.6m in debt, but I have an idea of how they can clear that. All you can buy at half time is cans of Coke for €3 a go, beer without (without) alcohol and Real Madrid crisps. Of course Real Madrid crisps. Start serving up beer and pies to the 10,000 or so tourists that pitch up at every game and they´d clear that debt at the drop of a sombrero. We want pie. 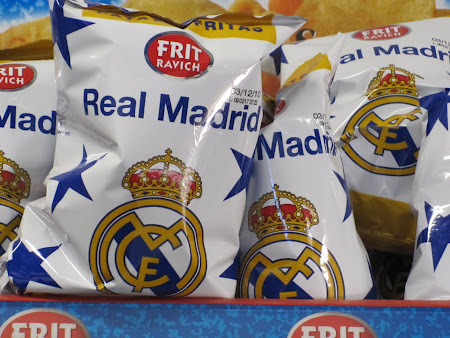 A crisp profit, but where's our pie? 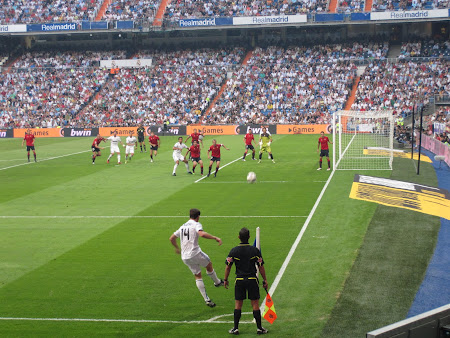 Ooh it's a corner. 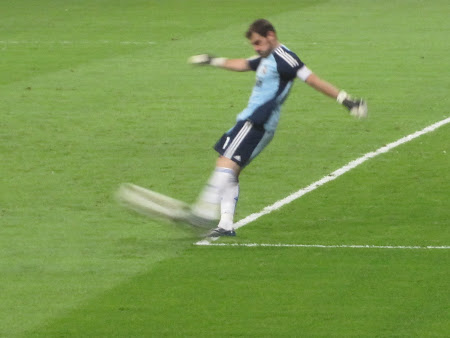 Can he kick it? Yes he can.
Things picked up in the second half. Within minutes of the restart Osasuna had the blind cheek to win a free kick after Cavaliho had scythed down their striker. They rushed forward in numbers, and this was the cue for Ozil to work his magic. Just as he´d done in the World Cup he broke away like a young whippersnapper, ran the length of the pitch and delivered a cross toRonaldo. He shot - he always shoots - it rebounded off the outstanding Ricardo in goal, back to CR7, who then forgot his lines and passed to Cavaliho to cushion a right footer into the net. 1-0.

Ozil oozed class in that second half. He was subbed just before the end and was the recipient of aBernabeu standing ovation for his troubles. He might just be a Real Madrid number 23 that delivers the goods. Unlike the previous incumbent of that shirt. 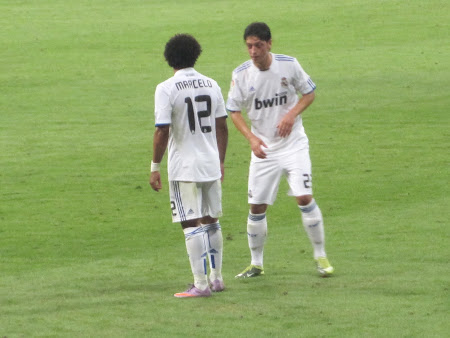 It's just a step to the left. Ozil teaches the timewarp (again) to Marcelo. 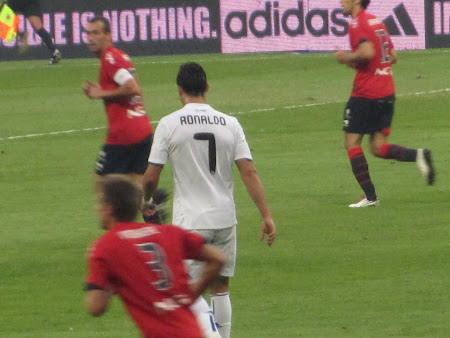 Too much pre-match jamon y queso amigo. He'll be back. 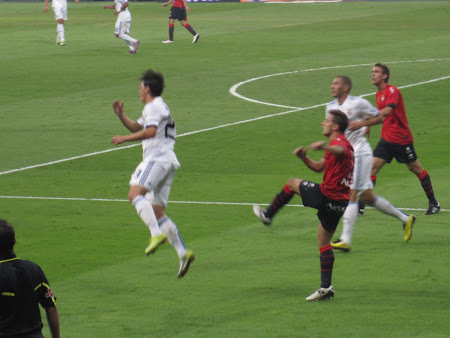 Kick ass.
Unlike the majority of the 70,000 crowd, I stayed until the end. Begrudging applause greeted the final whistle, rather than the boos which were reported back in England by a few journalists that weren´t there [cough] Henry Winter.
Even with a huge crowd, it´s very easy to hop on the metro opposite the stadium and be back in town within 20 minutes. The reason I love Madrid so much is that there is always something happening. After Los Blancos in the Bernabeu it was time for La Noche en Blanco. It´s an annual music and arts festival that sees museums, theatres, cinemas and galleries open all night. Concerts and street performances spring up all over the city. We drank in some culture and then a few beers. Pasar la noche en blanco (no sleep all night) - indeed. 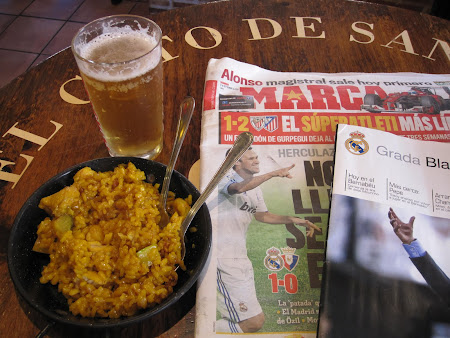 Mañana mañana. A proper Spanish breakfast the next morning did the trick.
For lots more photos from the game CLICK ME.
- Feel free to comment below -
Posted by Danny Last at 17:32

I think Madrid is finding his football
identity.

Blimey, Salinas Del Manzano, that's not a place most English visitors to Spain will ever get close to. I've actually been through it - driving from Cuenca to Teruel late in the evening last March - though I've not actually stayed there. Almost in the Rincón de Ademuz, which is a pretty wild place.

@ejh - Brilliant. Next time you drive through, pop in the bar and mention Danny and Ana and you'll get free beer I'm sure. My in-laws own the bar there.

I got married in Cuenca. What were you doing there?