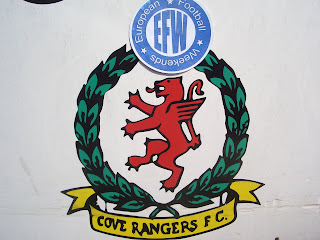 -click on photos to enlarge image -
Such was the efficiency and helpfulness of Rainbow City Taxis (ironically sponsors of Cove Rangers) that 20 minutes after watching Aberdeen lose to Celtic, the EFW team were on the terracing at Allan Park in good time for this Highland League fixture in the Aberdeen suburb of Cove Bay.

Amusingly having just watched Celtic, this was to be the battle of the Rangers. Cove Rangers being the Highland League Champions of the last two seasons and Brora; a slightly less prestigious outfit from the small industrial village of Brora, Sutherland over four hours north (north!) of Aberdeen.

The first thing that strikes you as you enter Allan Park is the marvellous slopping pitch. Throw in the lesser seen floodlight/telephone mast combo, a quaint press box, views out to the North Sea and a pretty swish sponsors lounge and - despite being fairly small (2,300 capacity) - Cove Rangers have a neat little ground. Plans are afoot however to move the club to Calder Park at Altens in the near future.

How many grounds do you walk into and receive a warm welcome and handshake!? This was a first even for me and I've seen games at 199 grounds around Europe. Martin Hill from the Cove Rangers website was the chap in question and as we chatted away, it occurred to me that a fine Brighton and Cove Albion was being formed. (I'm from Brighton, he of Cove).

Having endured an epic coach journey down here, by the time Brora Rangers had entered the pitch and stretched their legs they were 2-0 down. Early goals from the bald headed -EFW man of the match - Martin Johnston and Robbie 'Limahl' Henderson (he is a ringer for the Kajagoogoo front man) saw to that. 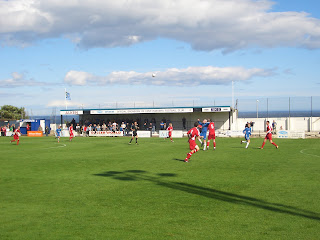 Brora Rangers all at sea. Views out to the North Sea (tick). 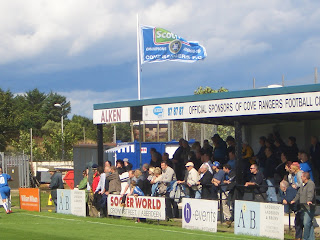 The Champions flag flies proudly over the home faithful. 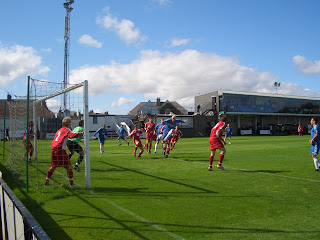 Martin Johnston fires in yet another effort on goal. 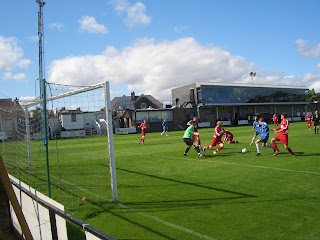 With Barrie Stephen and Roddy Black combining well down the left flank and Martin Johnston and Kevin Webster pulling every string known to mankind, it was one way traffic for the Champions. Johnston had previously played for Brechin City and Webster Arbroath - it showed.

During the first half Brora Rangers Scott Beg made a crunching tackle just in front of us on Barrie Stephen. Pleasingly, the referee waved play on. This was a great introduction to fitba in the Highland League, it's not for the feint hearted or indeed for fannies!

As the game moved into the second half, the Brora keeper had a few minutes he'd probably rather not be reminded of, so lets do it. Firstly he let our man from Kajagoogoo claim his second of the afternoon with the softest header I've ever seen. Limahl nodded in a cross from the magnificent Kevin Webster which trickled through the legs of Macallum at a rough speed of 2mph. Cue uproarious laughter from those behind the goal and a trip to the low self esteem clinic for the Macca. 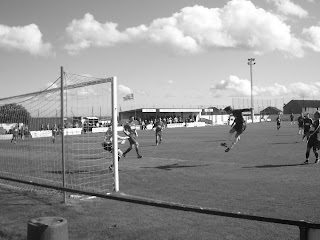 Limahl heads in the softest goal of all time. Bursts of laughter all round ensue. Probably worth clicking this image to enlarge it.
Next up Macca was 'too shy shy' as Kevin Webster (him again) smashed in a free kick, this time at about 300mph from the edge of the box. If we were worried about the standard of play upon entering Allan Park we needn't have worried. Cove Rangers at least are a classy outfit. Another Championship beckons.

If you were wanting to visit a Highland League game then let me point you in the right direction. For a wonderful local rivalry, look no further than Cove Rangers v Inverurie Loco Works. At this level anyway, it's about as good as it gets. Three seasons ago the Locos were all set to win the league on the last game of the season. Cove had other ideas though and a 1-1 draw on the day denied the Locos the title. Things have never been the same since. One for the EFW notebook.

Nairn County and Buckie Thistle have wonderful old skool grounds that would be worth a visit but the most scenic is probably that of Fort William. At least the local fans there can marvel at Ben Nevis as they face up to another probable defeat for The Fort.

After the match Cynical Dave, Cynical Bob and I made for the comfort of the well equipped Cove Rangers social club. Beer flowed as usual and we decided that this was to be just the start of our Highland League adventure. We'll be back! 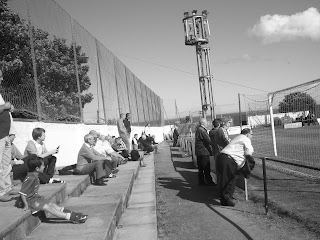 All very relaxed on the home terrace. Note the floodlight/telephone mast combo in the corner. 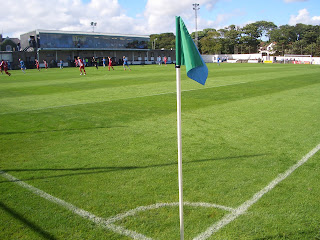 Corner flag looking on in envy at the plush sponsors lounge. 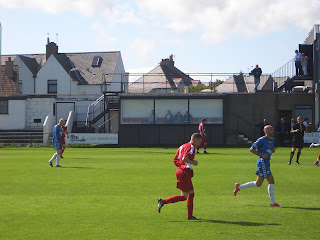 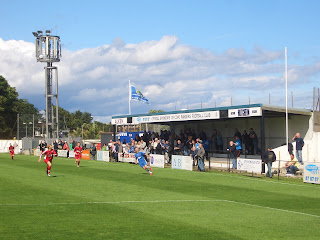 I often go along to a Highland League game if Aberdeen are playing away but I’ve never managed a double header like yourself! I was at the Inverurie Locos - Cove game in 2007 and it was a cracker. A great advert for the Highland League.

I think the Dundee Utd - Aberdeen game on 2nd January 2010 is the next game you should try and catch. The 2nd is a public holiday in Scotland so I'd expect a full house for the New Firm derby.

It's great to see that the SPL has brought back the traditional derby day on the 2nd so you’ll be spoilt for choice with the Old Firm, Edinburgh, Highland and Lanarkshire derbies all taking place on the same day.

Funnily enough I went to the very game you recommended on my last footie triop to Scotland. Cove Rangers v Inverurie Locos on 26 August last was a Aberdeenshire Cup quarter final and what a game it was. Cove were 2-0 down by half-time, pulled level then went in front (3-2). Cove were pegged back then went in front and finally won 5-3.

Add to all this a Beckhamesque free kick, a penalty, a red card and not a bad evening's entertainment. The only problem is where to park - Cove Council seemed to have a lot of yellow paint to spare and used it liberally on the roads all around the ground. I eventually put the car in the local school grounds - I'm sure I wasn't supposed to be there but no one shouted at me and the car was still there after the game!

I really like the Highland League even though my total score is only four (Keith, Deveronvale, Lossiemouth and the afore-mentioned Cove Rangers. Lossiemouth in particular is a lovely seaside town. Next up I hope is Clachnacuddin v Huntly on 21 November next.