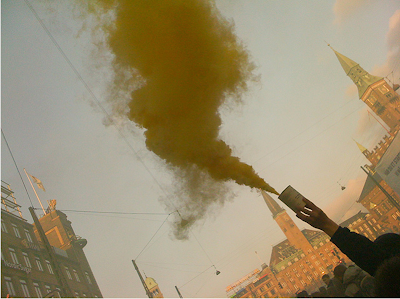 Fingerprints - Sign o' the Times
FC Copenhagen 3-1 Brondby (20:03:11)
Around a year ago prior to the FC United v North Ferriby United game, me and my mates noticed a group of lads we haven't seen before in our local, clad in expensive 'hoolie-chic', writes Matt Wilkinson. Not the usual sartorial look for an Evo-Stik Premier League game, granted, so we asked them who they followed. "Brondby" was the answer, followed by a friendly explanation of their touring the North-west of England on their own European Football Weekend.

A bond was formed and we promptly showed them the best pubs Manchester can offer on a Saturday night together with all the drunken buffoonery that entails. A pledge was made that night that we were to come and visit the guys for the FC Copenhagen (FCK) v Brondby (BIF) derby game (the 'New Firm', no less) sometime next year. And so it was a few months beforehand cheap flights were secured together with dodgy accommodation (more of that later!)
However, bad news was broken to us a couple of weeks before, it seemed the Brondby guys were boycotting the game. We were welcome to attend the game on our own, but after the explanation for the boycott, there was no chance of that happening, given FCUM's own history of protest and defiance. The previous derby game at Parken (FC Copenhagen's ground) was riddled with crowd trouble, so Brondby as a club felt duty bound to take action. This resulted in the novel idea of fingerprinting every Brondby fan in order to obtain a ticket. Naturally this didn't go down well with the fans, and all the various supporters groups vowed to boycott the game forthwith.
We were promised a lively weekend, whatever happened, so landed in a chilly Copenhagen to find our lodgings. Four of us had made the trip from Manchester with one of our crowd having a well-deserved reputation for securing the cheapest possible accommodation, resulting in being booked into (delete as applicable) the coldest, insect-riden, noisiest, smelliest hotel room around. And this weekend was no exception. Cheap? Yup! Subterranean? Yup! Sharing with insects? Yup! Site of a terrorist bomb explosion? Yup!
Anyhow, the game was set for Sunday afternoon, and as it was Friday night,our hosts treated us to a tour of Christiania (If you like your 'smoking', you'll love the place!), before an informal tour of the deserted Brondby Stadion, or as they prefer to call it, 'Kim Vilfort Stadium'. A beery night followed, but we were encouraged to turn up on Saturday for the peculiarly European tradition of supporting the team during training.
Brondby's training ground is next to their stadium, so easy enough to find, we weren't however counting on finding 1,000 of their lads supporting the team as though it was the game itself, tifo banners, flags, flares were everywhere... not the kind of thing you'd find at Carrington, Cobham or Melwood... 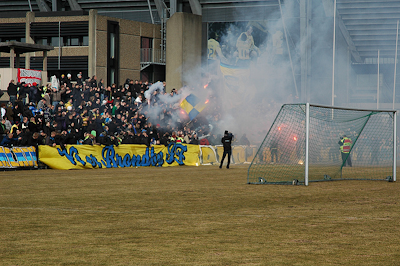 Brondby IF fans show their support to the first team ahead of the derby clash with FC Copenhagen, which they were boycotting in protest at the requirement for a fingerprint to purchase a match ticket 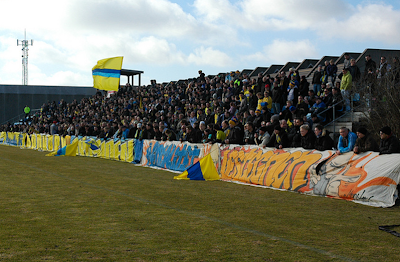 After yet another Tuborg induced outing around suburban Copenhagen and the next day a hungover morning stumble around tourist sites, we were directed towards the centre of town towards the only bar that was big (and stupid) enough to show the game to all those not attending. The pub had five bars on four levels. Although it was a generic Irish themed bar, it was slightly more reasonably priced than anywhere else, (i.e £4 a pint as opposed to £7!) so we grabbed a spot and waited.
Minutes later we noticed a roar coming down the street, so went out to have a look and noticed around 1,000 Brondby lads marching with a huge banner making their feelings known regarding the fingerprint issue, along with numerous smoke bombs, flares, and a Viking roar which told me to get out of the way. The lads began pogoing down towards the Irish bar amidst clouds of noxious yellow smoke and I promptly lost my space in the bar, doors shut, giant security staff having none of my dumb Englishman routine. 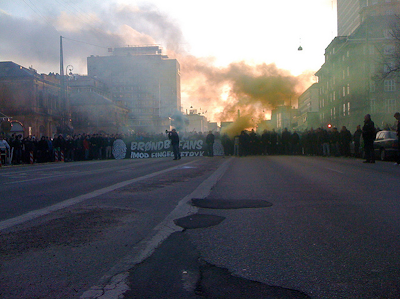 They'll be coming down the road... 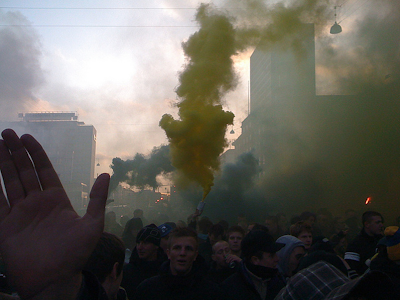 All was not lost, our friends from Brondby had found refuge in a Scottish bar round the corner, and we squeezed inside. We we're reliably informed by our friends that losing 1-0 to FCK would be seen as a decent result, so should Brondby score, we anticipated things could get lively. However, in the 25th minute, Brondby did the unexpected and actually took the lead through Nicolaj Agger (Daniel's cousin) and the place erupted like nothing I'd ever seen.
Complete pandemonium, glass pint pots were smashed against any surface, people were jumping on top of and behind the bar, grabbing and smashing anything in sight, lots of hugging, grabbing and shouting into each others faces... this is how I imagined the Viking hordes pillaged North East England in the Ninth Century. Me and the English lads crouched in an almost foetal position to avoid the flying glass (and beer of course).
The joy didn't last for long, the inevitable arrived just after half time with an equaliser from Cesar Santin. From then on in, FCK took control and scored a couple more to finish BIF off, with ex Chelsea man Gronkjaer netting the third. Naturally the mood changed to one of disappointment, and even anger in some quarters, with lots of people arguing with each other, bar staff, security and inevitably, the Police.
Not the greatest ending to the weekend, and we didn't even get to the game. But thanks to the support, friendliness, hospitality and outright passion of the Brondby lads, it was certainly a weekend to remember... 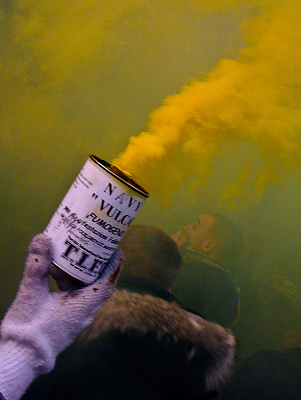 Good beans?
Before the days of taking fingerprints to watch a football match; European Football Weekends went to this fixture. Read about that match day experience HERE.

Fun to read something from a different angle than has been the norm. Also good to see most of my prejudices surrounding Brøndby and their lame, ignorant thugs they call fan seem to be based on facts ;p

Great read. Good to see the fervent support of a Danish non-franchise club who have been in existence for longer than a lot of their contemporaries. Their fans may be a handful but they are passionate and genuine. Give me them compared to the glory hunters at FCK anyday..

Anonymous, not really sour grapes to be honest. Just aint keen on Franchise football wherever it is in the world. Scandinavia has its fair share of franchise clubs and clubs that have re-wrote (reinvented?) their history through amalgamation with other teams. That is the North American way and as a North American would say....that sucks

Anyway, no big deal, each to their own. We all have our own opinions on what is right and wrong for a football team and I ain't looking to argue. Copenhagen is a great trip and even better when the cheap bars are found..

Offcourse,- you are too much of an idiot to recognize the difference between two amateur clubs merging together in the early sixties, and the franchise bastard, created from two pro-teams in the early nineties, whos place in the top of the league have been financed by cheap loans and supports from local politicians.

The Blue Factory of Dreams said...

Hello, what a great blog you have here, I have followed him for some time now and the contents are spectacular.

I have already referenced this link on my blog, I invite you to visit:

This week-end, there is a Benfica-FC Porto, FC Porto where will celebrate if he wins ...the title!

What a laugh, you obviously don't even know your own history. The only reason Brøndby is still around is due to heavy financial support from the local politicians and the city. Both before and after Interbank.

Although you two teams clearly dislike each other, surely you don't want to see future derbies played out with no away fans? And also, don't you think that taking fingerprints of fans wanting to attend a football match is a step too far?

Can you at least agree on that?