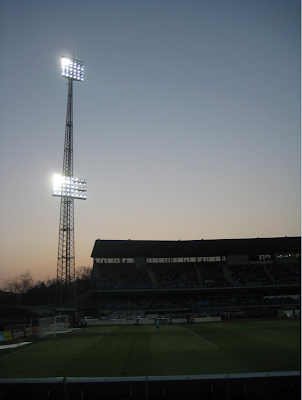 The Mighty Lighty Of Plzeň
FC Viktoria Plzeň 2-1 Hradec Králové
European Football Weekends Czech correspondent, Iain Thomson takes one last look at the best floodlights in Europe before - deep breath now everyone - they are hauled down.....

This report, my first for EFW, is rather belated due to a terminal case of having-lots-on-my-plate-and-not-getting-round-to-it, but here you go:

The Czech winter break is a long one, lasting from mid-November to the end of February. Winter breaks in surrounding countries also mean that the months of December and January can be rather barren for football. So it came as a great relief when the last weekend in February came round and offered up the first round of spring fixtures in the Czech top-flight, the 1. Gambrinus liga.

While the main event of the footballing weekend for me was Monday's pairing of Baník Ostrava (my Czech team) and Sparta Prague (boo!), the chosen match for Saturday was at the opposite end of the country...
This isn't a true case of 'groundhopping', as I've been resident in the Czech Republic for six years now, and have been to Plzen before; in fact this was, in total, my eighth football-related visit there. However, Plzen has a lot to offer and it's always a pleasure to go back. 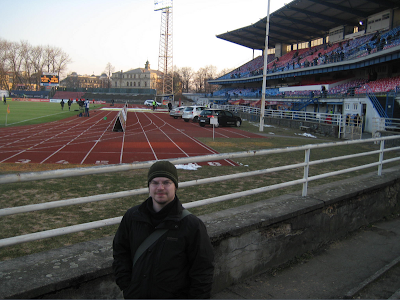 In lane 7: Mr Iain Thomson
Before the game started, we visited Pivovar Purkmistr, one of four microbreweries in the city (not counting the more well-known Pilsner Urquell) for some lunch, where we enjoyed a fantastic meal and beer for very reasonable prices, and were also joined by a busload of Hradec Králové fans, who, I'm happy to say, were in good spirits, spending most of the time singing and being generally well-behaved. After this it was back into town and straight to the stadium.

FC Viktoria Plzen are the only professional team in the city (with a population of about 170,000, it's the fourth-biggest in the Czech Republic), and are currently enjoying the most successful period in their history: last year, they won the Czech Cup for only the second time, and topped that this year by winning their maiden league title (which was clinched two days prior to the writing of this article). The current squad features a slew of ex-Sparta players, the most well-known of whom is playmaker Pavel Horváth, who has previously enjoyed spells, albeit brief, at clubs such as Sporting Lisbon, Galatasaray and Vissel Kobe. 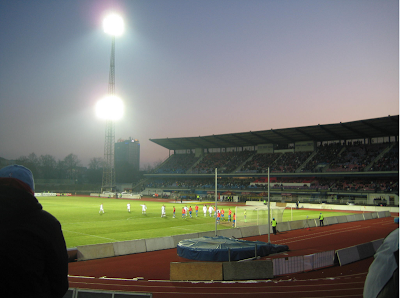 200m to get to those floodlights? Give me 23 seconds*. *And one of those Flora silver blankets they get after finishing the marathon upon my arrival.
The opposition, newly-promoted FC Hradec Králové, came to the match in fine form, having guided themselves to mid-table respectability, and were never seriously in danger of relegation. I was expecting a good match, and that's how it turned out, with Plzen never quite imposing themselves and Hradec giving them a game. Plzen were still able to make it 2:0 with two second-half goals, with Hradec scoring at the death to make it 2:1.

Plzen's stadium, the Stadion ve Štruncových sadech, dates from the mid-50s and is situated bang in the centre of town, a stone's throw away from the old town and just across the river from the famous Pilsner Urquell brewery (and just as close to another, very nice, microbrewery, Pivovar Groll). The stadium, with a capacity of 7,500, formerly consisted of a massive main stand, with a ten-row deep row of crumbling terracing (some sections with plastic seats bolted on) surrounding an athletics track. 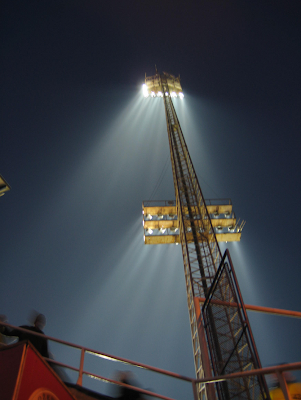 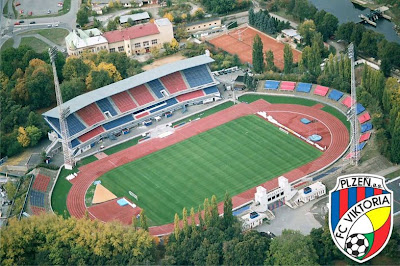 A postcard from Plzeň
This was to be my last visit to the ground in this form - reconstruction work to make the ground UEFA-compliant and get rid of the track and terracing started in April and is due to be completed in the autumn. It's a shame as the ground is (was) one of my favourite professional grounds in the country. Happily, the imposing main stand will be retained, with the pitch being brought closer to this and three entirely new stands being constructed along the other sides. Sadly, it looks like the memorable floodlights (two massive pylons, each with two sets of lights) will have to go...

So, absolutely terrible news with Europe's best floodlights about to be 'filed under bin'. And to be replaced by what? EFW did a little bit of research, and were truly disgusted to unearth the plans for the new stadium. Work on that sterile ground is already underway. It's the kids I feel sorry for. Imagine a whole lifetime of identikit stadiums. On the plus side, Hradec Kralove, with their Trencin-like floodlights, will still be in their traditional (unreconstructed) stadium next season. Where do we sign?


Like this? EFW went to Viktoria Zizkov. And loved every minute.
Follow European Football Weekends on Twitter
The all new EFW forum is now open for business
- Feel free to comment below -
Posted by Danny Last at 11:43

I loved my visit to Plzeň. I'm hoping the EFW Oktoberfest coincides with a home game there as that's a definite match sorted for me.

The painted pavement signs of the pedestrians wearing hates as you walk up to the ground rather amused me.

the old stadium compared to new one: http://bit.ly/jZ0JGY

I was very glad myself that I managed to attend a game at Plzeň before the construction work has begun (brucki.blogspot.com).

Yes, I'd been to Plzeň half a dozen times before this season, but as soon as I heard about the reconstruction work I made a point of getting back at least once before it all started.

Massive shame about the floodlights, but on the other hand I'm quite glad they'll be retaining the main stand virtually unaltered (bar perhaps a new coat of paint)...

Very nice EFW debut, Iain! Congratulations! :) I remember our trip to Plzen in February 2009. It was my fist visit at Struncovy sady & first experience with Pivovar Groll (Lotr 11° - delicious!).

@Brucki
Hmm, I think I know this "collage" from somewhere? ;p

so let me add the information: © by the strongly recommended website http://www.myfootballway.com

Thanks for the comments chaps. This has really whet the old appetite for the EFW Oktoberfest.

Really enjoyed this article. Having spent a large amount of time watching Slovan Bratislava win the Slovak Championship in a ground with an athletics track and [dare I say it] an impressive set of floodlights of it's own, there is an interesting comparison to be drawn with Plzen.

While the likes of us may marvel at the lights [I especially liked the term 'Trencin-like floodlights by the way], the local fans at Slovan absolutely hate their temporary home yet can only dream of a new ground.

I'd never really want another one of those stadiums that all look the same but I can't help thinking at least one would benefit Slovan, and Slovakia greatly.

Congratulations to Plzen on the title, thanks for the tip on the microbrewery and roll on EFW 2011!

dude, you live in the CR? did not realize that in cursory readings of your blog before - which I had found interesting but was not yet moved to read regularly.

Now that I know you live there, I will have to check out your work on a regular basis. I spent 6 months living at Jaurisova 6 in Praha (just off Nuselska, between Horky and Pod Jezerkou on the 11 tram) studying at the NYU campus in Male Namesti. Best 6 months ever. It was spring 2004 and I got into soccer (again - I played when I was young) watching the CL with Porto and Monaco advancing to the final.