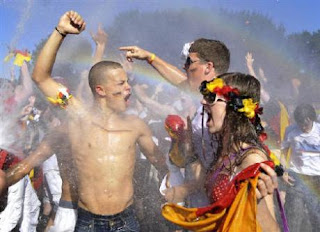 They think it's all over
Germany 4-0 Argentina (03:07:10)
He's back back back. Tim Stewart was due to be flying back to England before the quarter finals. Which self respecting Englishman wouldn't want to hang back to see Germany finally get their comeuppance though. It wasn't as if they were going to knock their mandatory four goals in against Diego's boys was it, oh:

After a temporary World Cup reprieve, I saw the Germans demolish Argentina on Saturday. How do they do it? Not so long ago they lost a friendly in Berlin to a patched-up England side featuring the likes of Stewart Downing and Darren Bent. They also lost a World Cup warm-up at home to Argentina. As ever, they were mentioned as Cup contenders only in as much as 'You can never write off the Germans'.

What happens? For the second World Cup running, they have confounded the critics by producing, out of nowhere, the most attractive, swashbuckling attacking football of all. Unlike Capello's chokers, they have the fearlessness of youth and go for the jugular with ruthlessly direct counter-attacks. I went to Green Point hoping that Argentina's beautiful game would triumph over Teutonic efficiency. Instead, Messi and co were crushed even more humiliatingly than England.

Watching eight German goals live in a week could be considered bad for any Englishman's mental health and there was a distinct sense of deja vue. In the lead-up to kick-off, the stadium was a sea of blue and white with Argentines partying like they had already won the Cup and greeting Maradona like a cult leader. By the end, the Deutschland flags had appeared out of nowhere and it was the Germans who suddenly seemed to have taken over Cape Town last night.

Spain are my last hope of flair winning the day but the Germans are starting to look unstoppable. Much as I would love to see Durban, it is probably for the best that I am now due to fly out tonight ahead of the semi. You have to admire the Germans' achievements - but I don't need to see them all at close quarters. Mind you, I met an Aussie last night, who had seen them put four past all of his team, England and Argentina.

Idling away my days in Cape Town, I checked out Africa's smallest bar, the Workshop in Hout Bay, and got a lift over a spectacular mountain pass with a biker. I also found myself in somewhere called the 'Kink Bar', which has burlesque videos running on a giant screen and cocktails with names like 'The Fetish' and 'The Anonymous Fondle'.

Subject to getting on a BA standby flight tonight, it looks like my World Cup has now finally run its course. There's people on the pitch. They think it's all over. It is now (as Klose scores again).

Great series…! What’s not like about Germany? Who’s got time for “flare”, when losing means national disgrace (everywhere but here, where a player can bask in his utter anonymity)

...now, back to “normal” soccer!...
watching foreigners play in America instead of the other way around
…
GO NEW YORK beat the Colorado somethings-oh-so-cute, is it Toffies?