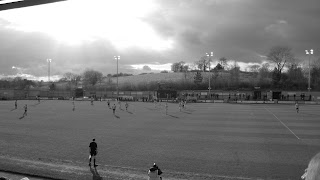 Forest Green Rovers 4-1 Lewes (28:03:09)
- Click on photos to enlarge image -
Birmingham way!? Somewhere around London!? Shropshire!? These were the sort of answers I was getting at my football - albeit Premiership - obsessed office in Sussex the week before this fixture, when I walked around with a clipboard asking football fans 'Where do Forest Green Rovers reside'!? Time simply flies by at my place of work.

Evidently, two coach loads of Doncaster Rovers fans were also clueless as to the whereabouts of 'The Little Club On The Hill' (nod to Wikipedia) some years back as they'd arrived in London for their away fixture with FGR. Whoops/snigger.

They are actually based in Nailsworth, Gloucestershire, lying in one of the Stroud Valleys in the Cotswolds. It's a delightful village and one which would grace any pre-match drinking session. Hell, you could even take your wife there when - get this - there wasn't even a match on. It has a bit of a reputation of being tricky to get to but in reality, it's not that hard. Only 90 minutes out of London Paddington on the train (hello Donny fans) to Stroud and then a 4 mile bus/taxi/*cough* walk to Nailsworth. It's worthy (Nailsworthy?) of the trip.

Lewes approached this match in pretty good shape. I say that but they'd actually lost their last - gulp -17 games in a row. They were also (thumbs through little black book of excuses) without half of their first team squad including, shinning light/man of the season/all round class in a glass David Wheeler who was away playing for England (schoolboys). Their manager had also resigned a few weeks beforehand, the club had only just batted away the threat of administration, they'd been relegated during the week and resorted to scratching around other teams apprentice players to gather a squad together for this match. Apart from that they were in fine shape.

On the previous Saturday, Forest Green Rovers had scored 5 (five!) goals in just one half (one half!) of football away (away!) to Altrincham. To put this into a smidgen of perspective, it had taken Lewes 1625 minutes of football to notch up their last five goals. Unfair sides or what!?

The Lewes away support this season has become stuff of legend. Turnouts include; Altrincham (5), Salisbury (3), Torquay (4), Wrexham (13), Burton (15) etc etc...if Noris Mcquirter was still alive, surely he'd be jotting these figures down in his Guinness Book of Records notebook. For this match Lewes actually had a respectable turn out of 13. 10 on the club mini bus and 3 of the European Football Weekends team; Cynical Dave, Big Deaks and myself who had travelled to the game by train from Brighton.

We were met upon our arrival in Nailsworth by EFW Facebook member and FGR fan Phil Sheppard and his merry band of mates. These lads were spot on and a pleasure to spend the day with. We kicked off with a couple of pints in the Village Inn, walked across to The Britannia and then, like men we walked up (up!) the steep hill to the ground - actually because we'd missed the bus - and had another couple of pints in the clubs own pub 'The Green Man' attached to the main stand. 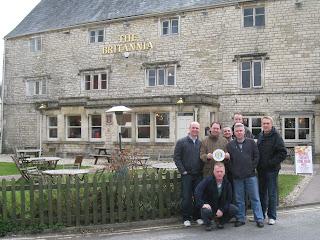 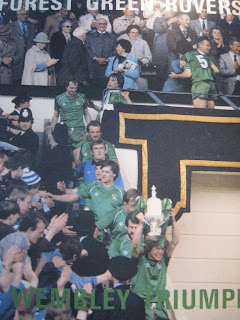 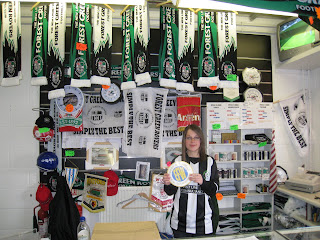 Clubshop fully stocked (tick).
Inside the Green Man we were joined by members of the Forest Green Rovers Ultras who go by the name of the 'Rockwool Army' - named after the stand that they reside in during games making no little noise in the process. Fans were getting misty eyed as they chatted to us about winning the FA Vase at Wembley (1982) and their rivalry with Gloucester City.

Lewes took the lead in the game (I'm sorry, run that one by me again - Ed). Yes - it's true - we witnessed it all with our very own mince pies, Lewes actually took the lead. Joe Keehan opened the scoring in the 5th minute when he unleashed a shot downwind that flew into the bottom corner of the net. 1-0 to The Rooks. If only York City hadn't sent us down in the week. All we'd have had to do is win the next seven games in a row with York, Ebbsfleet and Grays not gaining a further point and outscore the aforementioned Ebbsfleet by 52 goals to boost our goal difference and we'd be staying up. Nuts.

Don't panic Mr Mannering. Normal service was shortly resumed. Rovers scored four times in reply, Lewes had two players sent off and conceded their mandatory penalty. Still, in fairness, Lewes didn't disgrace themselves and their youthful looking team can be fairly pleased with their afternoons work, save for the sendings off. The first one was fairly dubious as skipper Anthony Barness pulled down hatrick man Andy Mangan. Some say he got the ball but the ref thought otherwise and as he was the last defender he had to go. The 2nd was fully deserved, Stefan Cox stamped on Rovers substitute Paul Lloyd and I'm not too sure that's in the rules. Red card son. 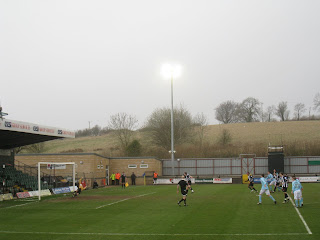 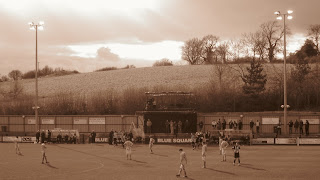 How many grounds can you say that the sheep on the hills get a good view!? 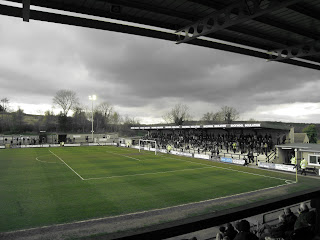 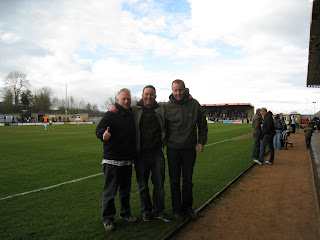 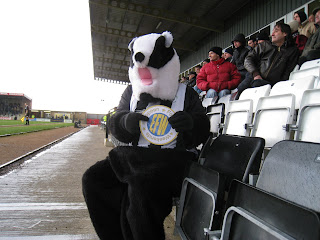 Bradley the Badger. Club Mascot or at least I think s/he is. 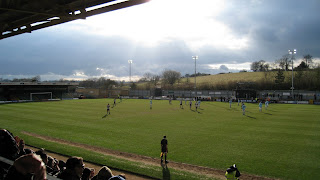 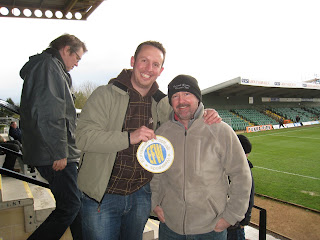 During the 1st half the EFW team actually sat next to ex-England cricketer and now famous for his works of art - Jack Russell. Jack attends every home match and is a top man. He's known for being very eccentric but that's what I like about him. If you are reading this Jack, I'll doff my battered old flowerpot sunhat to you my friend. Actually friends aren't invited to Jack's house. On the rare occasions that they are, they're said to be blindfolded to keep the whereabouts of his abode a secret. Brilliant!

So leaving our new friends behind - who'd agreed to attend the EFW Oktoberfest in Holland and Belgium - the EFW team made their way back to Brighton. It was still jauntiness personified on the way home despite the inevitable defeat and relegation. Relegation is actually no bad thing for Lewes. Beer will be allowed back on the terraces next season (hurragghh) and we can change ends at the half time interval of every game (hurrraggghh). Relegation's what you need. 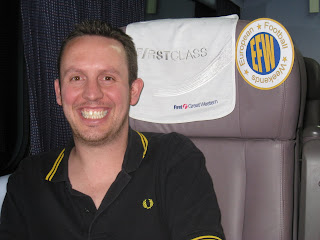 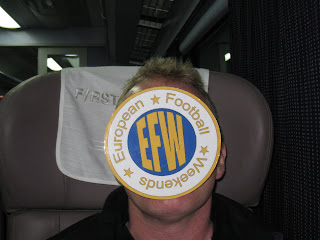 Absolutely what football should all be about. Puts Premiership fans to shame. Weel done and keep the faith!

Excellent article. Excellent read. Glad you enjoyed your day at the top of the hill!

Nice to meet you chaps and a great article that should put FGR on the map of 'must visit' grounds for all football fans.

See you in October if not before.

Thanks for the link....a great read after a day's work. Your article suggests you had a memorable time in Forest Green land despite the result: keep up your travels and think about publishing 'the best of' to raise funds for your club.
Your experiences remind me of why I love travel to away grounds.
Happy Days
pitchfork

Danny, cracking review - Top man ! Even the hill walk didnt put you off.

See you all in October.