START DAKAR
DUC 2-0 Dahra, Jeanne D'Arc 1-0 Casa Sports (Senegalese Ligue 1, 05:06:11)
Nick Ames writes on a double-bill of Senegalese football action. Woof.....
I'm halfway round the perimeter of Stade Demba Diop, and I'm feeling pleasantly surprised. They'd told me nobody went to local league games, that the teams - especially the slew of similarly-sized outfits based in Dakar - were losing their identity, that the vibrant atmosphere you'd hope for at an African football match was a thing of the imagination. Yet it seems they're wrong; there may still be 45 minutes until kick-off, but as I near the north-west corner the sound of drums, whistles and assorted percussion items gains in clarity, while people file to and fro around a single entrance that leads to two turnstiles in a slightly protruding, domed wing of the stadium. I enter, resisting a pocket of vivid-smelling food stalls to slither under a felt-tipped sign informing me that tickets would cost 100CFA - an extraordinary deal given that a double bill's imminent. I cough up, and realise that the noise really is deafening now, as are the shouts that intersperse any lull. Ears several steps ahead of my feet, I move through the barrier and edge down a dingy, unlit corridor. I scale a flight of steps wondering what spectacle this labyrinthine approach has concealed. Surfacing amid what is by now a deafening racket. I look to my left and right, and see an arena packed to bursting with teenagers. I look down, and see two men standing tall, dignified, in long white robes - waiting for a man in a green suit to move from between them. I look up, and see a roof. I notice a placard, and realise what I've done. This isn't DUC vs Dahra in Senegalese Ligue 1 - it's the University of Dakar Karate Championship.

Half an hour later, I reflect that perhaps somebody had been trying to tell me something - and if so, it'd probably been the taxi driver who'd mistakenly taken me to an empty dustbowl named in homage to a different Diop, Iba Mar, even before my martial brain-fart. By now, take three has seen me successfully gain passage into the day's football, joined by around 200 others. Not content with the remote flank I'm corralled into, I've deployed 500CFA to sweeten a policeman into letting me enter what passes for a VIP area or directors' box. I sit among a group of middle-aged men, trying to strike a balance between courtesy and obliviousness to the fact that my presence is piquing no little interest. Two and two has made five - a few non-playing footballers gather round, ask who I'm working for, which of their friends I'm looking at. I reply truthfully and move the conversation onto the fortunes of their two teams, who take to the artificial turf soon enough. 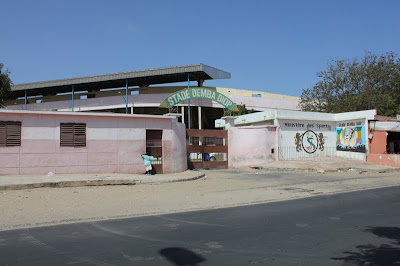 The entrance to the Demba Diop 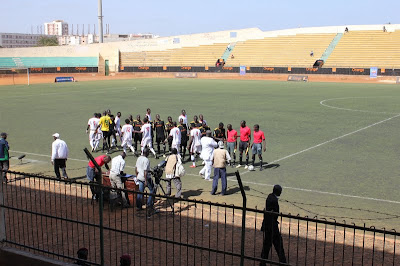 DUC and Dahra poised for action 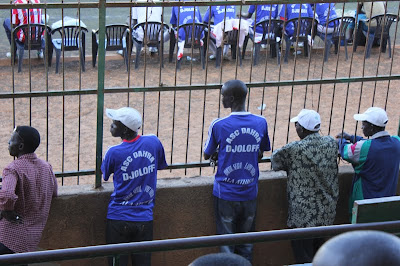 The away fans
This one's the warm-up act. Mid-table DUC are nominally the university side, and clearly not as well-regarded as their karateka compadres. Dahra, who lie just above the relegation zone, come from 200 miles away but seem to have the more obvious support, primarily in the form of sotto-voce grumbles among a small group of wizened sages to my left. If few care overly about this one, its audience will at least be gradually swelled by those drifting in ahead of the main meal - second-place Casa Sports facing off against ailing, basement-dwelling giants Jeanne D'Arc.

Dahra pass the ball deliberately, joylessly into touch from kick-off, and the fare rarely improves from then on. This league averages a little over 1.4 goals a game; it's not so much that chances are non-existent, although genuine creativity through the middle is painfully rare, but finishes are hurried and final balls ill-timed. The play in midfield is niggly and patternless, although the hosts' wide players provide a few moments to savour. DUC should be at least two up by the time the interval arrives, but there's little to suggest this match can rise above the mean. 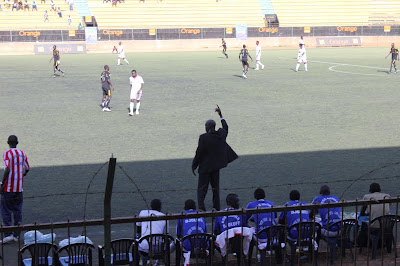 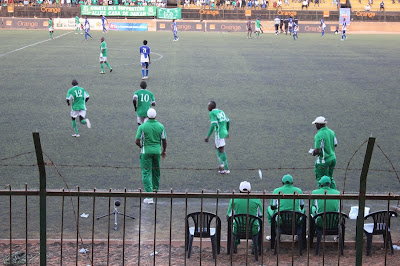 Drinks all round
Buoyed by the unexpected addition of a teamsheet, mysteriously couriered to me by a Mr Cisse, I settle in for the second half and immediately witness a goal. Not that I'd admit it to anyone, but a little part of me has been watching in the hope of spotting a rough diamond neglected by previous European emissaries (unlikely; this league's average age is depressingly old, around 28 I'm told, and most of the players on view have been around the block two or three times). Dahra centre-back Cheikh Sene had gradually become the focus of my inner scout in the opening period, but now he misses a straightforward diagonal ball and DUC's Dembo Coly - certainly one of the best players on view - smashes home from close in.

Everything is resolved within the space of 30 seconds, around the hour mark. Dahra centre-forward Fidel Gomis, a name pressed urgently into my consciousness by one of their sympathisers before the match, runs clear but blasts his big chance high and wide. Play switches upfield, and DUC provide the moment worth sitting up for - a superb six-man move that culminates in Fadel Fall's sweet dink over the Dahra 'keeper, whose eccentric choice of a 'Ronaldo 9' Brazil outfield shirt can save nobody.

The stadium's filling up now, but my concentration starts to waver - there won't be another goal in this match, and both sides are well attuned to the fact. My mind drifts 22 hours or so, back to Dakar's vast Yoff Beach. There, I'd sat on a stray tyre watching two teams of 15 or 16 year-olds on a full-sized pitch in front of a staggeringly big crowd. As the evening shadows lengthened, so had their passes - but the intensity and imagination of the occasion had far outdone what lay here at Stade Demba Diop. If I'd unwittingly seen the next young Senegalese pretender to the famous Class of 2002, I'd done so yesterday.

DUC and Dahra are finally ushered away, with a 15-minute turnaround scheduled before their better-supported colleagues line up. There's now some genuine atmosphere. Casa Sports hail from Ziguinchor, an inland port in troubled southern region of Casamance. It's best reached by overnight ferry from Dakar, but the few thousand supporters Casa have attracted - who form a verdant collage in the stand opposite me - are primarily students, soldiers or police workers who've based themselves in the capital. Their sense of regional identity remains strong, to say the least, and this time the instrumentals that spread through incense-suffused air are for real. This is more like it. 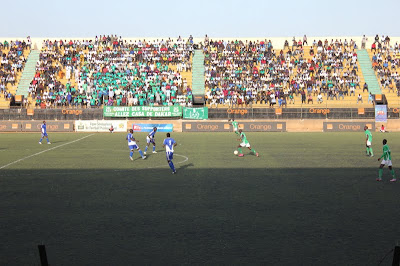 JA v Casa
As is the sideshow that unfolds while the teams meet and greet. A large, heavily-gowned gentleman is making an uncomfortable but valiant attempt to vault his way into the VIP zone, arms and voice fluctuating wildly. Everyone's on their feet now, and about a dozen pile into the melee before he's bizarrely extracted by a peacemaker wearing 'Fabregas 4' Arsenal getup. "He does this all the time," sighs the newcomer to the seat next to mine, to my considerable amusement. "He's trying to get to the Jeanne D'Arc president, trying to confront him. He'll try next time, too." Perhaps it's a just war - Jeanne D'Arc have been ritually burned this season, despite being the country's most successful club, and in context their plight is quite staggering. But their players kick off, the commotion dies down, and fury does little more than hang in the air for the next hour or two.

The heightened sense of occasion does lend itself to a feistier game. Casa field two or three of the national Olympic squad, including prominent number ten Stephane Badys, and have some poise; Jeanne D'Arc seem aware of the stakes, and pile into challenges that a demoralised outfit might shy from. There's a half-chance or two at either end, a few preposterously poor set-piece attempts, and I've subconsciously eased into talent-spotting mode again - Jeanne D'Arc right-back Adawa Seck looks a player. 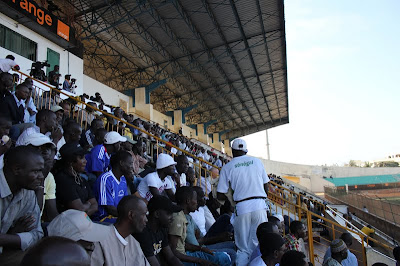 The main stand
Dusk is drawing in now, the light's getting poor and the waft of the Casa fans' drums and chants becomes lulling. A 15-minute spell of relative inactivity ends abruptly, tireless Jeanne D'Arc striker Pape Diop receiving his first accurate delivery and heading astonishingly wide from a couple of yards out. At half time, the league's freshly-bolstered goal average looks in some danger.

Jeanne D'Arc start the second period in comfort. Casa need the win to keep up their title challenge, and soon switch to what is effectively a front four, with Badys pulling the strings behind it. It doesn't change a lot, moves breaking down around the hosts' penalty area far too often, and discontent is becoming audible from the green mass across the pitch. The enveloping darkness really can't be helping, and the introduction of a floodlight or two around the 70-minute mark is long overdue if not an immediate cure. But the game's becoming stretched, at least, and Jeanne D'Arc are looking more confident on the break - epitomised when substitute Celestine Faye charges through and, with men free for a tap-in, drills well wide.

He doesn't make the same mistake twice. On 82 minutes, Casa's goalkeeper makes a confounding dash from his line to greet a harmless long ball. He then stops, but Faye has kept on running, and he lobs over the stranded shot-stopper to spark extravagant touchline celebrations. Casa miss a big chance almost straightaway, but the strugglers scrape over the line amid tension on a different scale to anything else I've witnessed this afternoon. In this mish-mash of a day's football (average goals per game: 1.5) I've stumbled across the shock result of the Senegalese season.

I'd like to get away sharply, because I'm in Dakar for professional reasons and have a dinner engagement to honour. There's quite a crush upon departing, though, the cause of which is unclear but seems to owe something to Casa fans' displeasure outside. My ribs and I edge out slowly, breathily, and find themselves on the main road about 15 minutes later. The scene outside is surprisingly calm, but the yellows taxis that drive past are all full. I walk back around the stadium, and find a car that pulls over, only to be beaten to the back seat by a figure that has darted lightly out of a corner, apparently from nowhere. As he shuts the door, I can clearly read the writing on the back of his top - 'Université de Dakar Karate' - and I know, then, that my wait will only be a long one.