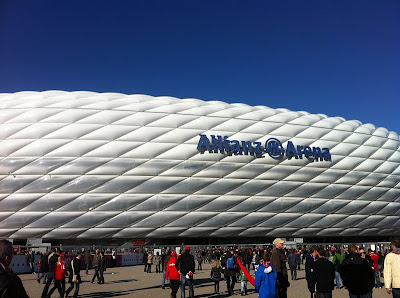 A couple of weeks ago Mrs O (Debra, as in the Mrs) and I found ourselves with the opportunity to see Bayern Munich play Hertha Berlin at the super sexy Allianz Arena. This was not something we were going to pass up so cometh the day, cometh the football fans, and we nimbly jumped on Eurostar to clickety-clack our way to Paris’ not terribly fragrant Gare du Nord. From there we sprinted around the corner to Gare de L’est to catch the overnight sleeper train to München’s Hauptbahnhof.

In my experience the word ‘sleeper’ doesn’t really bear any resemblance to the long night we endured. If you’ve ever laid down on a stretcher, one that has all the give of a kitchen worktop, whilst four men of Geoff Capes’ stature shake it about as if panning for gold, you’ll get the gist of what it feels like to be lying down on a fast moving train with your eyes closed. Rest, let alone sleep, does not come into it.

Still, the ‘free’ breakfast in the morning was nothing if not, er, nourishing, and a useful aid in denying the inside of my mouth any trace of moisture for the rest of the day.

Breakfast box full of love and yeast
We arrived in Munich so early, about 07:15, that all the grown ups had been replaced by drunk youths staggering about, shouting and eating sausages. Whilst the young people screamed and introduced their bodies to its first traces of gout, we decided to locate our hotel and get some rest. We steamed the receptionist, got a room key, any key, we were beyond caring, and bundled into our room. I was actually asleep before my head hit the pillow. This was just as well as there was no pillow (what can I say? It was a cheap hotel, OK, and we’d spent all our money on train tickets).

When we awoke it was time to leave for the football. We made our way back to München Hauptbahnhof and caught the U-Bahn to Fröttmaning, the stop for the Allianz Arena. As you near Fröttmaning the stadium peeks out to your right teasing you just as the merest of glimpses towards a finely turned ankle upon a lady would. The saucy minx. On leaving the station you stroll along a purpose built walkway that links the station to the ground. And it is here that your senses are really challenged by the sight that beholds you. No, not the stadium as you might expect, but more the sight of many men in leather urinating freely and openly for as far as the eye can see. 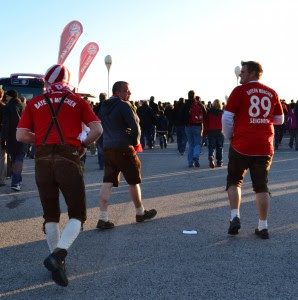 Leather men: FC Bayern fans make their way to the Schlauchboot
It would seem that the good burghers of Munich are quite free and easy about all things bodily. Indeed you can add breaking wind without care, embarrassment, or awareness of those walking in their proximity to that list. I’m no nutritionist but this is almost certainly linked to the Bavarian diet of beer and sausages making it impossible to keep it all in, as the Beautiful South once said. The hearty rasp of sausage and beer recently past led me to endure a flashback to my sleeper train bed and the sound of the man in the adjacent cabin emitting wind with such ferocity and frequency, I thought he was going to blow the partition down that divided our respective cabins and jet propel the train back to Paris.

But I digress, back to the matter in hand, as opposed to what was in the hand of the wee wee men, as it were. Finally the true splendour of the Allianz came into view – framed perfectly on this surprisingly warm and sunny October afternoon, by a brilliant blue sky. 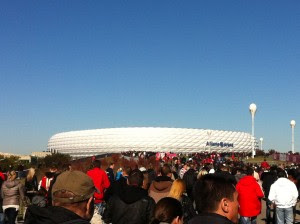 Approaching the ground from Fröttmaning station. The whole area, not just the stadium, is landscaped and designed in a way that reminded us of the world the Tellytubbies inhabit
Excitedly we picked up our tickets from the polite and helpful ticket man (there are well over 50 ticket booths so queues are non-existent) and made our way through the digital turnstiles to begin a touristy circuit around the stadium before finding our entrance block. Once inside there are beer and sausage sellers as far as the eye can see. But you can’t purchase them using cash, oh no, that’s far too old fashioned and inefficient. Instead you purchase an Allianz Arena/FC Bayern Munich prepay card. A nifty idea that means you get your hands on the sausages and beer far quicker and also, in the case of football tourists like us, you end up charging the card with far more Euros than you need which I assume sits in their bank accounts accruing interest nicely. 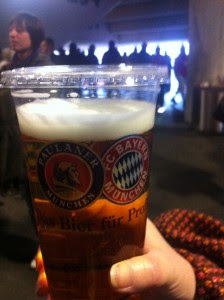 Beer wot I bought with my FC Bayern Munich prepay card. Despite being non-alcoholic it was surprisingly nice
Laden with artery attacking branded produce, we went in search of our seats. The view of the pitch and indeed around the stadium from where we were sitting was excellent. A pleasant surprise was there appeared to be no segregation of supporters. FC Bayern fans surrounded us but there were a lot of FC Hertha fans, resplendent in their blue and white striped shirts, imbibing beer and sausages whilst mingling freely and easily with their Bavarian counterparts. Over in the top tier to our right were the hardcore Berlin fans and they sang and sang and then sang some more. In fact they didn’t stop the whole way though the match; a credit to their club, especially as the game didn’t go their way, to put it mildly.

The noisiest section of FC Bayern fans, the Ultras (I believe), were over the far end behind one of the goals.  They waved flags and gave it back as loudly as they could. It was great. Reminded me a bit of going to English footy matches in the late 70s when you could hear the singing and chanting long before you got near the ground, but without the threat of violence.

About ten minutes before kick off, the pitch side announcer directed everyone’s gaze to the stadium’s screens. A camera shot, deep inside the bowels of the ground where the players were gathering. The roar that went up made the hairs on the back of my neck stand on end. The camera follows the team as they walk down the tunnel to emerge onto the sunlight pitch. Mrs O and I glanced at each other and exchanged big smiles such was the adrenalin rush.

Now, I’m not totally daft, and I realise we were being manipulated: it was all a bit Disney; a bit stage managed; a bit cheesy even, but we didn’t care. Good theatre is all about manipulating the audience’s emotions which if we approve we’ll happily buy in to. After all, we were attending a modern day drama played out at a splendid theatrical venue.

Anyway, a few minutes later the teams  lined up, did the hand shake thing, everyone sang a song (could have been Stern des Südens, but not sure) and we were pretty much ready to rock ‘n’ roll. This was a little bit like being at Carrow Road although we sing On the Ball City as loudly as possible and our hot dogs are often cold (stick to the pies people/Delia Out!). I’m happy with the City match day experience, or indeed, the UK as a whole (aside from rising ticket prices), but one thing I would like introduced at Norwich is the beer seller system at the Allianz. Once you’re safely tucked into your seat they have staff, identifiable by brightly coloured balloons, moving between seat rows merrily selling you beer so you don’t have to miss a second of the match. Brilliant. 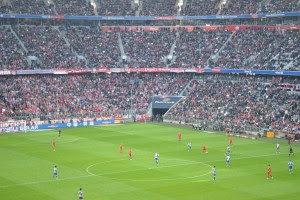 FC Bayern demonstrate to FC Hertha how to play football
The game itself was a total mismatch. FC Hertha were absolutely dreadful and conceded goals from Mario Gomez, Franck Ribery and the splendidly uber sounding German Bastian Schweinsteiger within the first 15 minutes. And it could have been much, much worse for them, and indeed should have been but for a combination of some good keeping and relaxed finishing. As a result only one more goal was added before full time courtesy of a soft penalty award. The penalty was duly tucked away by Gomez for his second. 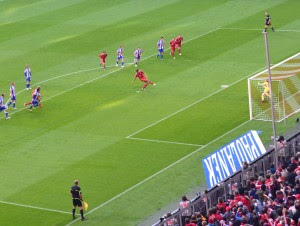 Gomez scores FC Bayern's fourth from the penalty spot
After the match we hung around and took some more pictures before lazily making out way back to Fröttmaning station. Once at the station itself there was a slight crush with 69k’s worth of supporters all trying to get a train home. As we stood in the middle of this large throng someone, no doubt bloated on beer and sausages ‘popped’, as Mrs O would say, and for a few awkward minutes we stood in a fug of someone else’s dinner before thankfully being swiftly directed onto a waiting train.

The U-Bahn journey back was filled with FC Hertha Berlin supporters singing (I did say they never stopped), and the Munich fans laughing at the chants. All good natured stuff and made for a light hearted end to the day.

In a nutshell, sleep or no sleep, if you get the chance to attend a game at the Allianz Arena then go – it is a great day out for architecture, people watching and football obviously. But do watch out for the beer and sausages as they have a habit of reappearing in one way or another after consumption and often when you least expect it.


Adam is business manager for Debra Orton Illustration www.debraorton.com. You can follow both him and Debra on Twitter: @IamOrtonomous and @DebraOrton
Posted by Danny Last at 09:29