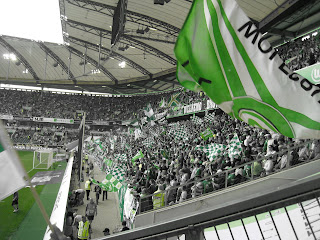 - click photos to enlarge image -
VFL Wolfsburg have been on the European Football Weekends radar ever since 1998. For five glorious years until 2003, The Wolves (Die Wölfe) of Wolfsburg were managed by Wolfgang Wolf. To coin an overused EFW catchphrase: 'What is not to like?'

These two teams very much divide opinion in Germany. When Hoffenheim used to meet up in the year 2000, they did so whilst kicking their heels in the fifth division. During an eight year period, the team - from the tiny town of Sinsheim in Southwestern Germany - flew up the divisions, until landing in the Bundesliga in 2008. Was it due to good fortune and tremendous skills, or because they'd become the toy of cash rich software mugal Dietmar Hopp!?

Similar criticism is often aimed at VfL Wolfsburg. For Dietmar Hopp read Volkswagen. In Germany, football clubs aren't allowed to be owned by one individual or company. VfL swerve this ruling because they grew out of a multi-sports club for Volkswagen workers. So fans of other clubs are angry at these two. Many don't want to see German football go down the same path as England - whereby rich chaps can come in a take over a club at the drop of a cowboy hat.

Anyway, that's hardly scratched the surface of an enormous debate about jealously and morality in German football. Rather than on these pages, that's probably all best discussed over a few beers. Talking of beer (loving that link - Ed.), that's exactly what 16 (sixteen) members of the EFW team had in mind as we exited our train from Berlin to Wolfsburg for this match.

Frankly, being 16 English lads, and without any teams colours on (almost unheard of in Germany) we couldn't have stood out more if we'd all been dressed in furry wolf outfits [mental note to self: order furry wolf outfits for next visit]. As such we were picked up by the police and escorted to the ground in - I might add - a very amicable way. 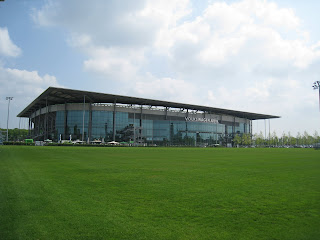 Our first sniff of the Volkswagen Arena.
Luckily, our alcoholic prayers were answered in the form of the official VfL fanclub. We'd been invited by them, and in particular Benny the Barman to come and enjoy some pre-match beers in their own 'Nordkurvensaal' pub built within the stadium. The WOBTRAS are a non violent organisation who don't go in for the traditional flag stealing of other ultra groups. They just stand for bringing noise and colour into the ground, and for filling occasional English visitors full of beer.

We sunk a few Wittingers which were going down swimmingly until we noticed the locals drinking Stackmann's - complete with novelty bendy glass. Red rag to a bull indeed, and so we helped ourselves to a few of those as well. 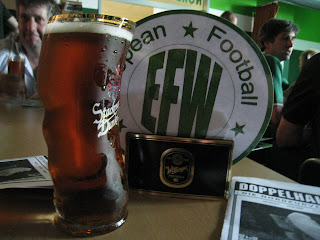 Our match tickets set us back a grand total of €11 each! VfL Wolfsburg are - at the time of typing this nonsense - top of of the Bundesliga. I'm not being funny but I got my €11 worth the nano-second I marched through the turnstiles and saw some tremendous headwear on show. One lady was sporting a hat that can best be described as a football pitch with a game of footy taking place on it: 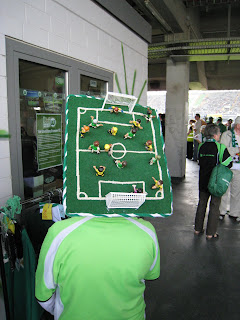 This chap (below) must have been absolutely gutted because up until she (above) showed up, he'd had one hand firmly planted on the EFW 'hat of the day' trophy: 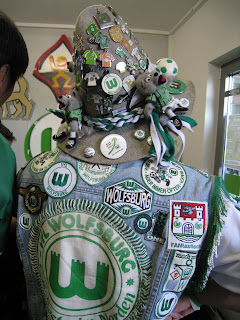 Inside the ground, and aside from ladies wearing football pitch hats - the other noteworthy point was the fact that an airship was circling around the pitch mental note to self, order furry wolf outfits for next visit [mental note to self: place order for EFW airship]. 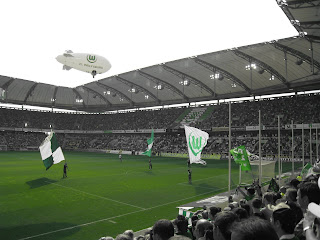 Click photo to enlarge and you might just notice the lesser seen airship in top left hand corner.

Along with the lesser seen airship was the lesser seen - in English grounds anyway - chap with a jetpack full of 5% beer. He kept a very keen eye on the EFW team, and at the slightest thought that one of us was in need of a light refreshment, he was swinging a fast shoe over to us for a refill. 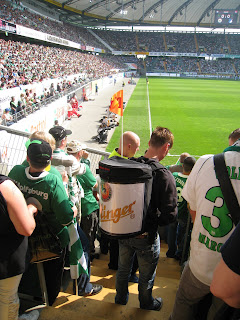 Always good to see 'Jetpack beerman' doing his rounds.
We were situated in the Nord Kurve (terracing). Before you get all misty eyed about the terracing, it actually wasn't all that great. They'd just folded the seats back, and as such you could forget surging down the terrace like the old days. Probably a good thing though and fans of health, and indeed safety would have been delighted.

One thing that I have no doubt about in my mind is that they simply must teach flag waving in German schools. Everyone knows that one must wave a flag in a 'figure of eight' motion but rarely have I seen it pulled off with such aplomb as in German football stadia. VfL Wolfsburg was no exception. Clearly the education system in Wolfsburg is working wonders. Full marks to them.

Our part of the stadium was the most atmospheric. Songs such as 'No One Likes Us - We Don't Care' and of course the mandatory version of 'Moonlight Shadow' were belted out whilst the rest of the stadium clapped along to the rhythm. The other thing I liked (you enjoyed yourself then? - Ed.) was the fact that the Wolfsburg badge was incorporated both within the actual nets of the goals [mental note to self: order set of EFW nets] and in the press box area. It's the little touches that please me. 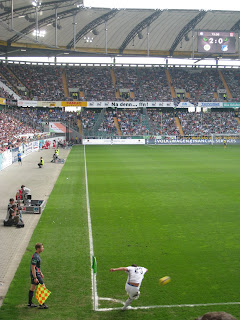 Hoffenheim's Sejad Salihovic takes a corner. If you click on this photo to enlarge you'll see the Hoffers away support in the opposite corner. They didn't fill it. 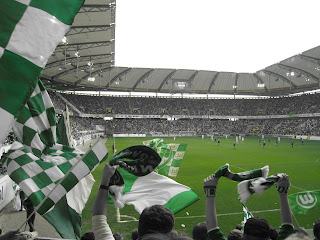 It's team colours o'clock in Germany. 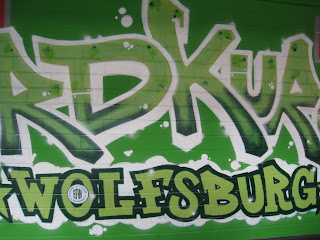 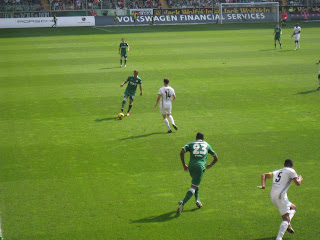 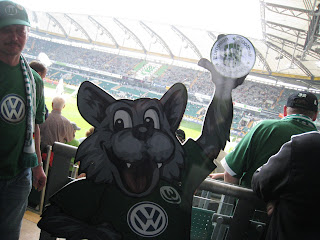 Hands up which Wölfi wants to sign up for the EFW team!?
That's about it then. What? Sorry? Oh, the game! Well, the first half stank. News had leaked out just prior to this match that Wolfsburg gaffer Felix Magath had signed a post season agreement with Schalke 04. He was roundly booed and ridiculed for doing so. This probably had an effect on the team for the first half anyway. In the 2nd VfL took command. It was no surprise that the eventual architects of Hoffers downfall were the prolific pairing of Grafite (23 goals this season) and Dzeko (19). Dzeko helped himself to a hatrick, mostly supplied by Grafite assists, and then Graffers notched a penalty late doors to give the scoreline a healthy looking glow at 4-0.

Thankfully, the EFW team had all remembered to pack their collective drinking boots, and so we wore them out on a night on the town back in Berlin after the match. Yet again, Germany had come up trumps with a winning combination of football and beer - done to perfection. Prost! 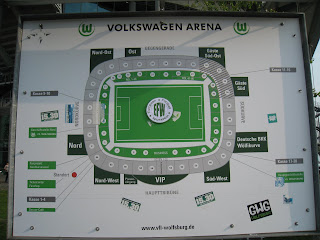 EFW on the pitch again. 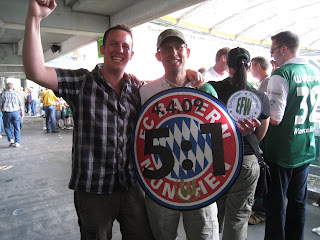 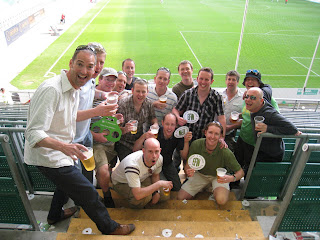 Post match celebrations for the EFW team
Posted by Danny Last at 09:50