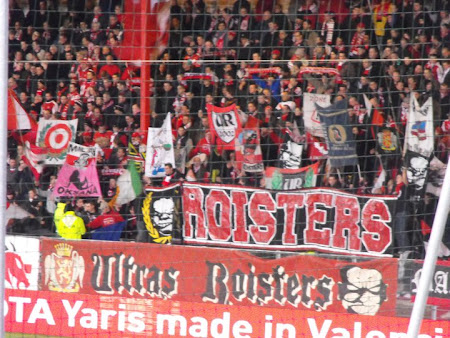 Andy Hudson with part one of a two-part series looking back on a French European Football Weekend with Andrew Gibney. Mr Gibney himself will pick up the baton for the thrilling finale on Sunday....
Gibney slowly put his drink down and looked him straight in the eye.
“I’m just having a beer” said Gibney.
“Do you want to die for your beer?” came the question from him.
“Are you alright?” I asked him.
“What a stupid question. Are you a fool?” he came back with.
Rewind twenty hours and I was boarding a London bound train from Newcastle. It was 4.40am and the platform was bustling with suited drunks awaiting transport south following a night out amongst the Geordie party crew. I settled into my seat and took a book from my bag. The next hour was spent listening to four suited chaps screaming “cheese and wine”. It certainly beat a variation of “remove your décolletage from its corsetry for the delectation of the gentlemen present”; it was certainly irritating. At Kings Cross I met up with Andrew Gibney who was embarking upon his first European Football Weekend. The destination: Lille; let the fun times roll.
We walked out of the station and found ourselves on a French street as the clouds burst. After spending ten minutes getting soaked we momentarily gave up on locating the LOSC boutique and instead settled down for a beer; the rainwater dribbling down my face and into a puddle on the table. We checked the map print-outs and set-off, eventually finding the shop and the source of Gib’s delight.
After playing Supermarket Sweep we headed off to our hotel: the racy ‘hotelF1’. Luckily I’ve been to T In The Park so I was prepared for the toilets there. I’ve also been camping so I was prepared for being confined to claustrophobic sleeping arrangements. We left the room as soon as we could, almost throwing our bags through the beds and rushing down the street, for we had a date with bière and Valenciennes.
With a couple of hours to spare before the Valenciennes train we found a bar for some food. French cuisine is rated amongst the very best in the world; French cheese is rated as amongst the very best in my world. What could go wrong? Order a bloody hamburger because you’re too bloody lazy to try and translate the menu; that’s what. The grey slab of meat was placed on the table within 360 seconds of ordering with a processed cheese slice limply clinging to the bun. We left without finishing the meal. Happily the next bar was much better and we downed a few beers before rushing for the train and a short powernap as we sauntered along the track to our destination 45km away. 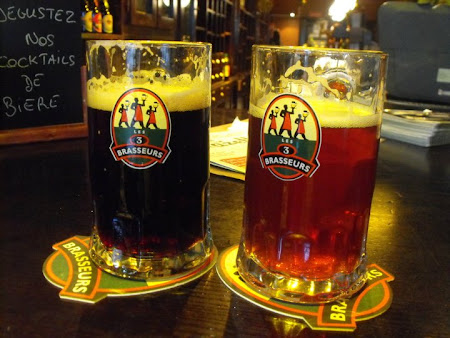 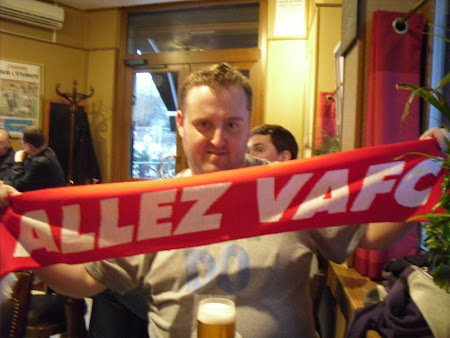 We'll support you evermore until tomorrow. Gib shows his colours.
We ventured into a few pubs between the station and the Stade Nungesser before entering the ground shortly before kick-off. The teams were in the tunnel; a small section of fans in the stand on the right touchline were singing; a larger group of fans in the section along to our right were singing and waving flags; the group of eight travelling Lorient fans behind us acted hard behind the fence. Our first Ligue 1 game of the weekend was about to start.
The two scoring forwards playing in France who qualify for the national team were on display: Lorient’s Kevin Gameiro and Valenciennes’ Grégory Pujol. There should be goals and perhaps some entertaining, end-to-end football. Gameriro was bright in the first half, forcing Nicolas Penteau into a fine save after earlier having a goal disallowed when netting while offside, but struggled during the second half after Lorient were reduced to ten men after 51 minutes following a Francis Coquelin sending off.
By this time we had swapped our seats for a standing position amongst the home fans in the same stand. The atmosphere improved due to being amongst the wilder kids even though the looks they were giving us and our  monster bag of chips suggested food would destroy any noise. Valenciennes, pressing Lorient back, were encouraged by Megaphone Man perched on the net but could only find the net through the second disallowed goal of the evening; this time Mamadou Samassa failing to time his run. Despite pressure the away defence held firm as the home side ran out of ideas and the lack of a goal was more galling as it meant that we wouldn’t hear the delightful tones of the pre-match announcer lady. I may not understand French but I like what I hear. 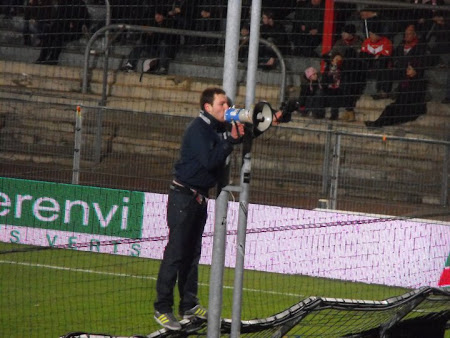 'Je le répète - has anyone noticed an Englishman and a Scotsman standing next to you?' 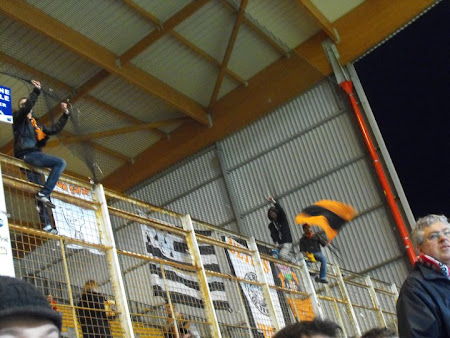 The away fans hadn't rolled in on the Lorient Express to sit on the fence, oh. 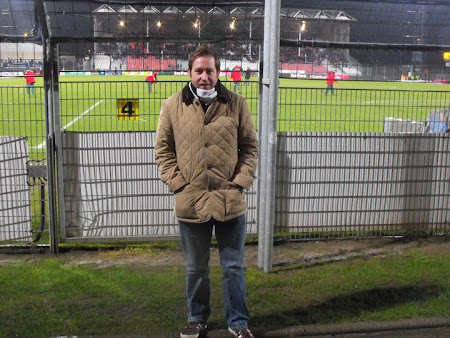 Mr Hudson Gannin' Away to Valenciennes, tick.
As the match finally stopped drifting to a close we headed out of the ground with some time before our return train to Lille. Side-stepping a three-on-one fight in the street we found a supporters’ bar for a beer. We were soon in that zone where it was too long to wait for the train but not quite enough time for an enjoyable beer. Luckily Valenciennes had noted that and provided a plan of her own. As we approached the door of the next bar Gib was stopped and told it was private members only (we think at least). As I left the bamboo structure outside of the door I swerved around a piece that was sticking out; Gib failed to follow suit and the whole structure, intricately woven together to provide shelter to the poor smokers, came tumbling down. Right onto the bonnets of two parked cars. We quickly walked on. The next pub again refused admission because Gib had trainers on; I also had a pair on and was already in the pub but had to complete the walk out. Passing another bar a guy leaving asked us what the score was. We had 15 minutes before the train arrived. The door was locked. It opened and we tumbled in, ordering a couple of beers to neck down quickly. We were quickly-disappearing customers as we drained the last drops from the glass just as we were being steamrollered into getting a lap dance in Valenciennes’ premier (possibly) strip bar. We hurried for our train.
Back in Lille we hunted down some more bars. At midnight, and with little idea of where we were heading, we stumbled upon a bar. Talking together at our table we heard mumblings over our shoulders. As we relaxed his voice violently broke in: “Do you want to die?”
To be continued...............

Named after the ace pilot Charles Nungesser of course. (nod to Wiki - Ed).
Providing they didn't actually die, you can follow Andy Hudson and Andrew Gibney on Twitter
Mr Hudson also owns the fantastic Gannin' Away
Mr Gibney is the proprietor of the excellent Gib Football Show
- Feel free to comment below -
Posted by Danny Last at 09:03