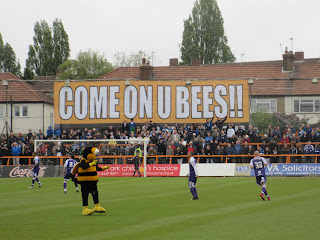 - click on photos to enlarge image -
A rare Football League outing for these pages then. However, before you go running to tell my Mum, let me put some rhyme to this reason. We had a shoe in both camps here having befriended fans of both Barnet and Rochdale on previous *ahem* European Football Weekends. In this League Two finale, our pals from Dale were on the champagne, having already secured promotion, whereas our Barnet chums were in possession of sweaty palms as a defeat here could have condemned them to relegation.

Grimsby Town were the team Barnet were doing battle with in a bid to avoid the drop. They'd gone on a winless streak of 25 (25!) games between September and February, prompting a couple of infamous fan rants that had made laughs come out of supporters up and down the country. At that time, The Mariners were seven points adrift of safety and a whopping 13pts behind Barnet. However, four wins and a draw in their last six games coupled with a Devon Loch type collapse from The Bees had rendered this match the most important since records began - probably.

As in the norm on these occasions, pre-match beers seemed like a fair idea. The magnitude of this fixture had drawn in usual suspect Big Deaks as well as a Dutch contingent from the Doing the 116 website. The Old Red Lion is a stones throw from Barnet's Underhill Stadium so we met the Barnet, Rochdale, Willem II and Lewes fans in there. The Barnet lads had been out decorating their stadium for an ultra style terrace display and looked in need of a beer, unlike the chaps from Dale who'd already been drinking aplenty on the party bus down from t'north. 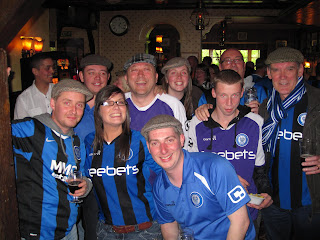 "We don't take life too seriously and we've been drunk for weeks" Dale fan Steven Hartley and friends. 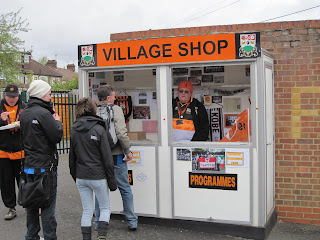 I'm just popping down the village shop darling, I'll be about 90 minutes... 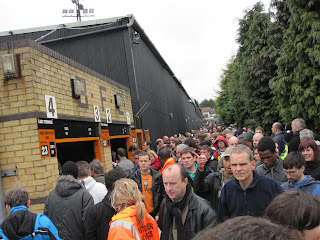 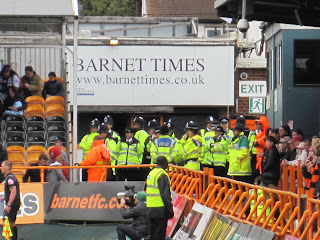 As the beers flowed Chris Nashdog regaled us with some BCM's (Barnet Comedy moments). There were plenty, most going back to the Barry Fry days. Once in the early hours of Christmas Day, police were called as a drunk man (our Baz) was driving a tractor around the Underhill pitch. This is the same Barry Fry who once thought it a good idea to set some tyres alight and drag them around the pitch in an attempt to clear off the frost. The same Barry Fry who was sacked about 12 times and promptly reinstated.

Apart from Fry, the funniest game recently was a Herts Cup match at home to Ware. Steve Percy, a long grey haired Barnet fan who last missed a game, reserves included, in 1981, had won a competition for place in the squad. Martin Allen, in charge at the time, thought it a good idea to put him on the substitutes bench. The Ware manager got a bit narky about this, so with minute left Allen sent Percy on. He promptly nutmegged a Ware player, got kicked, reacted and all of a sudden it started a 22 man brawl with the bloke being sent off. As the Barnet fans bestowed their aching sides in the stand behind, the ballistic Ware manager went bonkers and offered them us all outside for a fight.

After another couple of beers in a nearby cricket pavilion (!) we arrived at the ground to be met by scenes of utter chaos. These were only resolved when a Bees season ticket holder and I had a word with the Barnet Chairman and got the turnstile operators to accept both cash and tickets. Fans were getting irate, monster queues were forming and the police failed to get a grip of the situation - in fact they just shrugged their shoulders. Common sense prevailed in the end though. I think I was the only one there who had seen a crowd before.

Inside Underhill (finally - Ed) and it would be folly, first up, not to mention the pitch with its slope, of course the slope. Back in the day it used to be 12ft end to end, it's now 'only' about 8ft, but still the Football League had to be change its 'slopping pitch rule book' - yes, there is one - to accommodate Barnet. 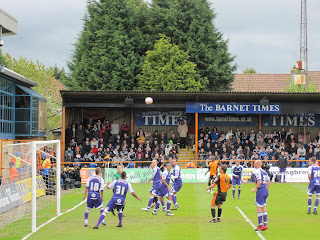 Hold on! Nine against Two? That's not fair sides ref.

Barnet bossed the match as Dale's recent poor form continued. Since promotion, Dale have been a bit lacklustre in front of goal. It was a shame for the Rochdale fans who'd travelled down in large numbers to salute the teams achievements. Many were wearing flat caps as a tribute to boss Keith Hill. Barnet got what they fully deserved in the last minute when Albert Jarret smashed home from 18 yards to send the home faithful into raptures.

In truth, the sting had been taken out of this Bees match (see what I did there?) early on. This is 2010 and news of Burton Albion's thumping of Grimsby was filtering through the terraces via Twitter, Email, Facebook and eventually, what seemed like three hours later, on the Underhill PA System. That meant Barnet would stay up regardless and therefore the tension wasn't quite what it might have been.

Inevitably, a pitch invasion ensued at the final whistle. There was absolutely no malice in it though. The Barnet fans sprinted onto the turf in their hundreds, celebrated with the players, clapped the away support - who returned the compliment - before filing off in an orderly fashion to allow the players to return for a lap of honour. Full marks to both sets of fans. Not a single hooligan amongst them - how refreshing.

So Barnet stayed up and in Grimsby, the whiff of fish has been replaced by the stench of relegation. Their 100-year Football League stay was over. More rants on the way from their fans then? I'm not so sure. Non-League Football is alive and kicking in my opinion. It really isn't the end of the world. When the volcanic dust settles and Grimsby are flying high in the Conference, they'll look back on yesterday with a cheeky grin rather than a rant. 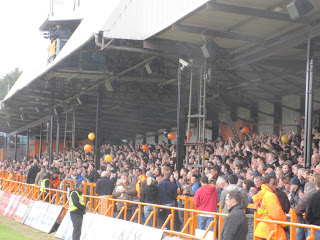 Happy days and a full house at Underhill. 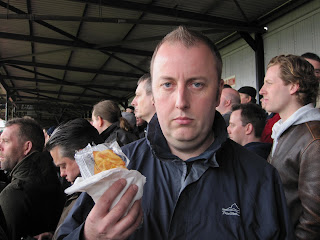 Big Deaks pasty had been heated by molten lava from the Eyjafjallajökull Volcano. It took a World Record 35 (35!) minutes to cool down. 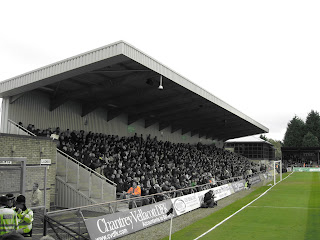 Biggest crowd of the season by a country mile - tick. 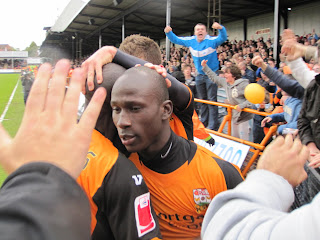 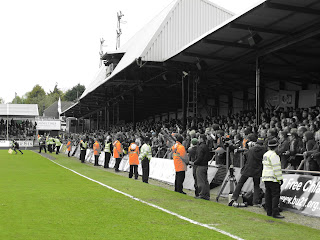 Please stay off the pitch. 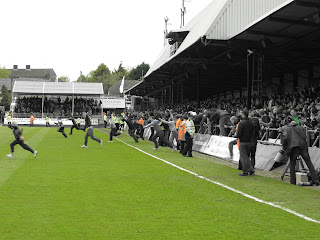 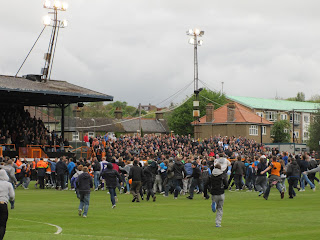 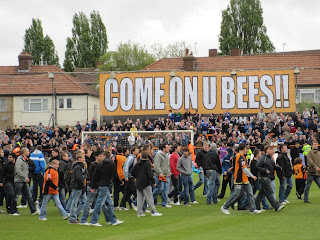 It was buzzing at Underhill.

The 100 Grounds Club were at the Burton v Grimsby match.

For lots more photos from the day CLICK ME

The man staffing the "Village Shop" is a disgrace to the good name of Barnet FC. Just so you know, like.

Barnet have been on a shocking run of defeats but our shower from Dale showed we can be even worse!

First Man - care to elaborate? I don't know him obviously but I did have a brief chat with him yesterday.

Anon - Dale clearly took their foot off the pedal after securing promotion. Don't be too downbeat. If you look at the bigger picture, I'm sure you'd have settled for third place and a spot in League One at the start of the season?

Did you have problems getting in the away end yesterday by the way? It really was chaotic outside beforehand.

I've now been told that up to 200 Rochdale fans were locked out!

I think that guy in the shop was in the "Your Place Or Mine" feature on Late Kick Off. Seemed harmless enough but a bit eccentric

Nothing too wrong about being a bit eccentric. I wonder what he's done to upset The First Man? The plot thickens.

I've just added a link to The 100 Grounds Club by the way. They were at the other relegation match between Burton and Grimsby.

Not as much excitement as hoped for, but a nice afternoon at Underhill though!

i love the picture of the club shop.its nutters like this lad that make the game interesting
mark whelan

From Chas (moved from another article):

Ok, maybe Im a dumb Yank but am I to understand that this “Steve Percy” somehow won a competition in 1981 to play for Barnet, actually got in a match, then “nutmegged” (WTF?!) a Ware guy, and started a bench-clearing brawl?

And got red-carded?! Brilliant!

@Chas - Strange but true my friend. "Nutmeg" by the way means playing the ball through another players legs. For the full effect and maximum humiliation, you can also shout "NUTS" whilst do this.

What's a "dumb Yank" doing reading an article about Barnet and Rochdale by the way? ;-)

I am just a passionate neophyte. It’s all so wonderfully new to me. I watch/write about the EPL, Europa League, and Champions League at work. At home, I check out the Bundesliga, La Liga, the Dutch league, and Serie A.

Hell, I have even watched Romanian second division matches on obscure soccer websites!

Soccer, let's juat say footy... has (almost) replaced women in my life! Is this uncommon?

Anyway, my friends who have always loved footy have wanted to tour Europe and check out matches anywhere…

…Since that’s what you guys do, I have an interest…

Sadly, I work when our NY Red Bulls usually play but the next match I get to I’ll send an atmospheric report…
Our new stadium is in a funky immigrant area, especially if you like dark, buxom Iberian-esque women (unmarried but with children)in tight Boca Juniors jerseys, but who doesn’t?

Life is great here in NYC, warm and there’s cleavage everywhere...
And I just picked up a weekly footy newspaper they give out in Irish bars,
They’re STILL whining about Henry’s handball!
Was it so bad? Or immoral?

Too bad about Fulham, it was heroic but Ath Madrid were better
..Now that I’m an “expert” I have no idea how the US can beat England (with all my heroes) but in football, you never know…

Keep it up; god knows how you pay for all these trips
…but I think I know WHY
...a girl near every pitch I dare say!
…Or you’re married an have a built-in excuse,
“Honey, the site needs updating; I have GOT to spend our last 50 quid on a pub match in South Fencepostmending, Outer Gloustershiremouth near Always-on-the-Dole about 80 kilometers down the M6...!”

By the way, extremely well-written
but maybe you are Martin Amis-types or Oxford/Cambridge sophisticates
Or ex VIZ writers

the site is very wittily done…

@Chaz - I can only presume you drink from the cup marked "easily pleased". Don't be surprised if some of thoese comments find themselves onto an EFW t-shirt in the near future.

Thanks for passing through and moreover for taking the time to leave a comment. Very much appreciated.

See you back here for the England v USA match in the World Cup old chap.

Sorry, only just popped back! If you still care, which I doubt, suffice it to say that most Barnet fans (I was one during a 10 year stint in Lundun) are sick to the back teeth of the man. He is rude, selfish, obnoxious and above all an embarrassment. He was indeed on that "Your Place Or Mine" show (far from the club's first choice, I assure you), and I have been reliably informed from more than one source that he did very little to ingratiate either himself, or Barnet, into the hearts of his fellow participants.

You can't chose your fellow supporters, true. But in this guy, and Percy, Barnet have two "wrong 'uns".

this blog very helpful to everyone,I like so much

Barnet what a great team let down by nuclear pasties. Shame.

Barnet FC <-- that's what i was looking for
Writing a Dissertation