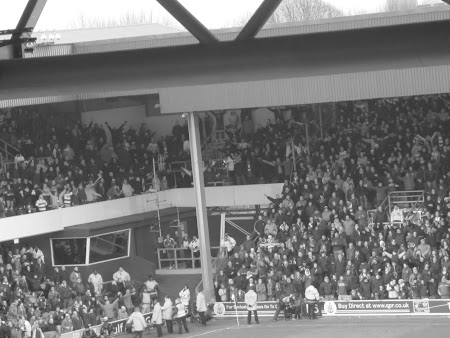 Taarabt's Too Good For You
Queens Park Rangers 2-1 Coventry (23:01:10)
The plan here was to pen an article about QPR without solely concentrating on their billionaire owners and that helipad that comes out of the centre circle on non-matchdays. I'd also planned not to dwell on the R's prestigious talent, Morrocan international Adel Taarabt. That was going prove a much more difficult proposition.

It's not often that EFW rubs shoulders with 13,185 Championship fans, 464 of whom were from Coventry. In fact, this is the first game we've ever covered in this division, and we've been knocking around for the best part of three years. Have we become bored with visits to Spartak Trnava all of sudden? No, don't be daft. It just suited our schedule.

The Rangers faithful have been singing 'We're Queens Park Rangers and we're top of the league' for pretty much the whole of this season. This should carry a postscript of 'but traditional kick offs are a thing of the past'. Granted, it's not very catchy. But a quick flick through the (£3) match programme revealed this statistic: between their home game with Cardiff City back on November 27 and the visit of Leicester City on March 5, QPR would have played no home games on a Saturday at 3pm. Nothing. Nada. I'd give Norris McWhirter a bell if he was still with us. This must be a record? 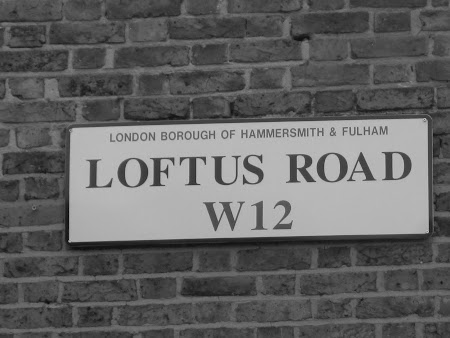 So with The Hoops chief conjurer, Taarabt (second mention - Ed.) supposedly off limits, what can we talk about? Pubs any good to you? There's plenty of them in Shepherd's Bush. It's undoubtedly one of the reasons the BBC chose to build Television Centre here in the 1960s. What in life isn't better after two pints? My colleague, Huddo Hudson and I had the pick of these pubs before and after the match. All of which were within a Dave Challinor throw-in of Loftus Road.

The Green, Uxbridge Road. QPR fans only (in fact most of them are and won't always welcome Queens Park Strangers). A couple of likely lads who get in here, but in the main it's a thinking fan's boozer, with quite a few older supporters who frequent it. A few real ales, including some guest beers.

The White Horse, Uxbridge Road. A little more lively, with a pool table and mixture of QPR fans and locals, many of who are Irish. It's also a shrine to both Queens Park Rangers and, erm, Newcastle United. Fact. 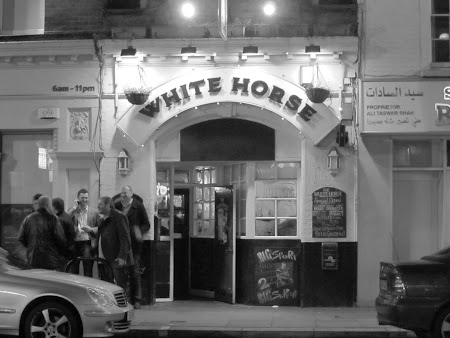 The Coningham, Uxbridge Road. Much further down the road, this is another Irish QPR pub straight out of the 1970s. You're more likely to hear a few renditions of favourite Rangers chants past and present in here.

The British Queen, Uxbridge Road. Opposite the Coningham (see above for details) this is the pub of choice for old hooligans and young upstarts. When Millwall paid a visit earlier in the season, this is where problems occurred. As such, we put a line through it on the EFW notebook and moved on.

The Defector's Weld, Uxbridge Road. On the opposite corner to The Green is your archetypal middle-class establishment, with cool tunes, laid-back bar staff and pricey drinks. If you're looking for football banter, this is probably not for you.

The Springbok, South Africa Road. The nearest pub to the ground and as such is always rammed. It has been done up in the last couple of years so your feet don't stick to the carpet any more, but word is the banning of away fans has killed the atmosphere in here a little. A few unruly types occasionally pop in here to bait visiting supporters as they walk past. Plastic glasses on match days as well. 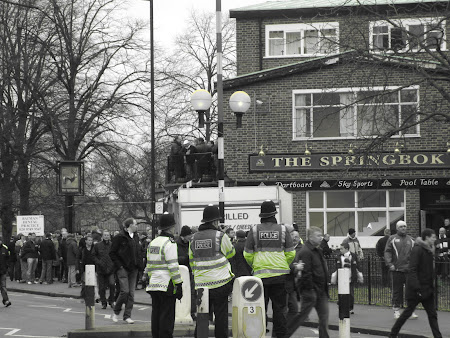 And if you want something to soak up the beer, then look no further than....

So sporting my Sunday best Loftus Road trousers and man bag, I swung through the doors of the salubrious QPR press lounge with Mr Hudson and signed my name next to Barney Ronay (Guardian) and Simon Brotherton (BBC). Out came a tray of hot pies which were snapped up quicker than a new Argos catalogue. There was also a vat of soup on offer along with free coffee and beer. As we're professionals at EFW, we didn't touch the beer. And then we thought better of it and filled our boots.

Making your way into the back row of the press box is easier than it sounds. I had to climb over a couple of chaps from the radio and across the lap of Ivan Speck from the Daily Mail. As I looked up, slightly flustered, upon reaching my seat I noticed a fan with a large Mexican sombrero, Moroccan flag, hooter and rattle. You couldn't not notice him. He's the R's version of John Portsmouth Football Club Westwood. And he's bonkers. 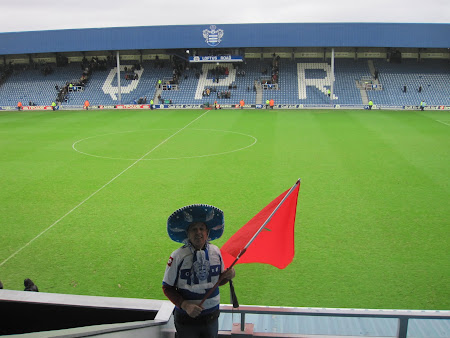 Where to start? Good on him though, eh? 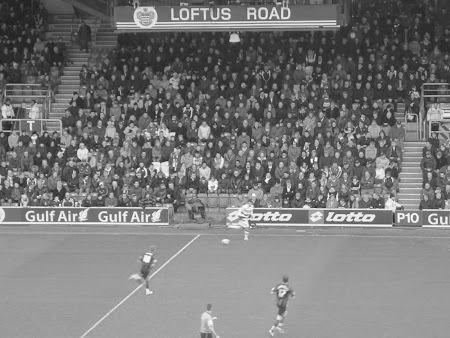 Free flowing football at Loftus Road, tick.
QPR's vocal element mainly congregate in the top corner of one of the stands. It must be the worst view in the ground. But they're Queens Park Rangers, and they're top of the league. I know this because they sang it throughout the game, along with some anti-Chelsea chants (eff off Chelsea, West London is ours), several very loud renditions of 'Taarabt's too good for you' and lots of references to Marlon King and his jail sentence for groping a woman in a nightclub and breaking her nose. 'She said no' they sang, 'She said yes' retorted the Coventry fans.

Marlon King, of course Marlon King, opened the scoring. Considering the frightful abuse he was getting, his celebration was fairly muted. It was a goal that had the football correspondents around me typing 'against the run of play' into their keyboards. Coventry were at it again against QPR. They're their bogey team and had only lost once in the previous seven meetings with the Rs (research skills - Ed.). 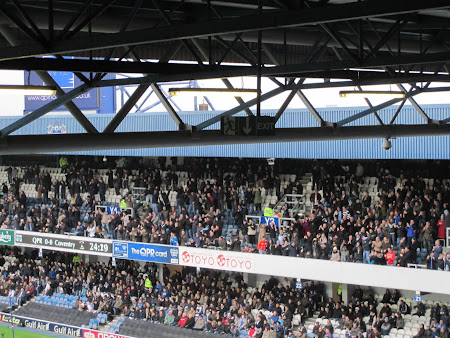 If you want a cathedral we've got one to spare. 464 Coventry fans in the top tier. 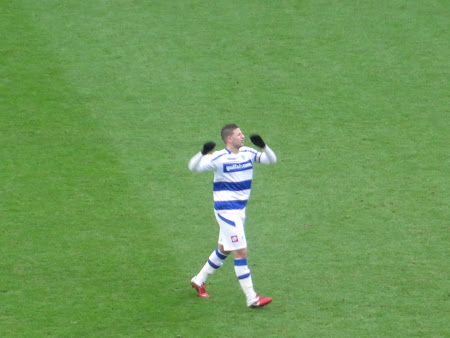 Early frustration for Taarabt. He'd have the last laugh though. Oh yes.
Just before half time, Adel Taarabt produced a piece of magic that had everyone purring with delight. He curled a 20 yard effort into the top corner the net for the equaliser. Off the bench leapt Neil Warnock and waved his arms in the air like he just didn't care. The tannoy played a blast of Pigbag and the crowd joined in 'da da da HOOPS da da da da'. It could be worse. I'd heard the previous day that Norwich City used to play songs on the PA whenever they got a corner.

QPR had the better of the second half. On came Ishmael Miller who produced a fingertip save from the excellent Keiren Westwood in the Coventry goal. At the other end, Paddy Kenny made a fine double save from Marlon King. Warnock pushed Taarabt out to the wing, with debutant Wayne Routledge taking up a more central position and, well, listen to me banging on about the actual game for a change. This Championship lark could catch on.

And then it happened. A moment of pure magic from Taarabt which will be talked about in W12 for many years to come. He produced a pinpoint 40 yard pass with the outside (outside) of his right boot. It landed at the feet of Routledge who controlled it perfectly with his first touch and lashed in the winning goal with his second. It was the sort of pass that made you want to stick your boots on and try and recreate the magic straight away. But it was getting dark already and we had to meet Paul Finney from the Independent R's website for a few post match beers.

First up was an entertaining press conference though. "He [Taarabt] is an exceptional player," bemoaned Aidy Boothroyd "I was tempted to run on and kick him myself," he continued. "I'm not jealous and don't want to complain about all their money...." he said jealously, whilst complaining about their money. He then carried on talking about Taarabt. Everyone was talking about Tarrabt. "I hate to say it but you have to admire him. You also have to ask why is here? I'm sick of talking about him, he has pissed me off all day."

Next up was Warnock. "You won't see a better ball than that in the world, never mind the Championship," he said with a big grin. "He [Taarabt] has some baggage with him. When I was younger, I wouldn't have entertained him, he thinks he should be playing for Real Madrid, but now he's got to help me finish my career. I look at his good side rather than the one or two bad things." 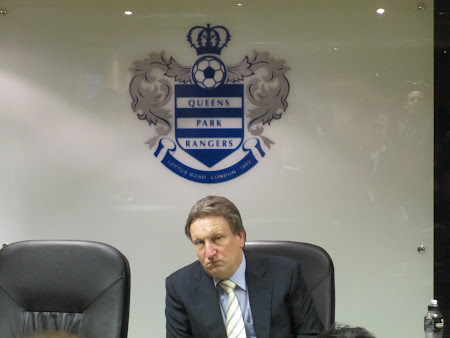 Warnock was quick to note that EFW had sneaked into the press conference.
QPR shouldn't have any problem filling those 4000 or so empty seats next season. They will be in the Premier League after all. They've got the money to give that league a good go as well, because of those billionaire owners. But we don't want to talk about them, do we? Today was all about Adel Taarabt and that pass.

For lots more photos from the day CLICK ME.
Grace Murphy Fund
- Feel free to comment below -
Posted by Danny Last at 09:51

Very good read...was at the game myself, nice to see a balanced and well informed article on the superhoops

Adel is a very special talent, don't be suprised if he is playing for a European giant in a couple of years.

@anons Thanks a million for taking the time to leave a comment lads. Very much appreciated.

Enjoy your games with Chelsea next season!

Nice write up - the mexican sombrero man is a lovely bloke called Ben. He has an extravagant surname and is a top man.

Best footie read in many a year! And all the better because it's about my beloved Hoops

What a fantastic bit of journalism keep up the good work

@JimF - Yep, he certainly was a character. Good luck to him I say.

@Anon - Thanks a million, whoever you are. Mum, was that you?

There is some YouTube footage of Taarabt's performance (v Coventry) here. Well worth checking out: http://www.youtube.com/watch?v=oQvTd6oQB3I