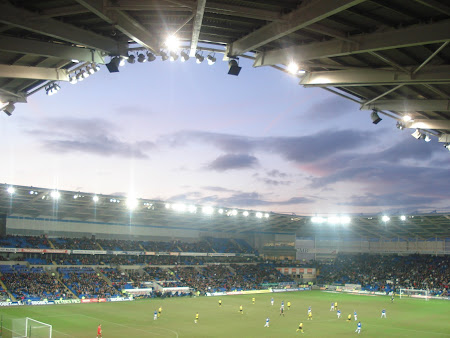 "Sometimes you get what you didn't know you wanted"

Three pieces of undoubted wisdom, from three doubtful characters. They feature here partly because I always like articles that start with a quote or two. They seem to add weight to a piece, give it a sense of credibility. Admittedly one of the quotes is from my Dad and the other is mine, but quotes are quotes.

The main reason for their inclusion is their apt summary of my current feelings on Watford, brought into focus after a trip to watch them take on high flying, loan addicts Cardiff City. Allow me to explain.

Ahead of the trip to Wales, Watford were flying. Leicester, QPR, Cardiff City, Portsmouth, Scunthorpe, Hartlepool and Derby had provided the Hornets last seven opponents and each had been handed beatings of various severity. Seven wins in a row and for the first time in a long time, eyes were beginning to look up the table instead of down. In hushed tones, Watford fans were beginning to ask the question, to dream of the impossible.

Anyone that knows me will tell you that when it comes to football I'm a hopeless pessimist. I will suck all the joy out of even the most commanding of leads, assuring all around me that even at 3-0 up with minutes to go, 'We still need a fourth here...' I know why I do it. It's self preservation. I want my team to do well so badly, that I daren't even let myself believe they can win. Sad isn't it? Anyway, even I have been forced to enjoy Watford's recent run of form and ahead of the trip to Cardiff, which was made with my fellow 'From the Rookery End' podcast hosts Jason and Jon, I was clear on my stance. Get something from this game and I'll believe we can challenge.

Before I talk about the game and what the result means for Watford's season, a little bit about the trip. Determined to do things in the true awayday spirit, our little sojourn took in not just Cardiff, but the hotspots of Weston Super Mare and Barry Island too. Barry was the perfect place to begin. With most buildings shut fast, solid shutters preventing access, the bleak appearance of the seaside town seemed to mirror my own inner football feelings. Whilst I don't dare to believe my team can win, these beleaguered premises didn't dare to dream that a cold January morning could deliver any paying punters. Anyway, one of the places that was open just happened to be a pub. You can guess the rest. 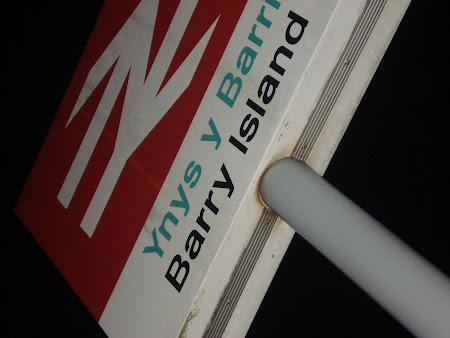 From Barry we got a delightful little train to Cardiff. The train itself seemed to be a hastily remodelled bus, with a few minor modifications allowing it to operate on train tracks. A Japanese bullet train it was not. No matter, we were sold tickets by a friendly conductor and we set about recording a segment of the podcast as we trundled towards Cardiff.

The stadium itself was much as I had expected. Big and soulless from the outside, cavernous and uninspiring once inside. Having said that, it was comfortable. The facilities were fit for purpose and the view was OK. There's a lot to be said for grounds with 'character' but as you get older, there's even more to be said for grounds with good toilets and easy access to the bar. The locals were relatively friendly and inside the ground there was the occasional indication of what the atmosphere could be like, should the assembled masses (23,000 for our visit) put their collective minds to it. 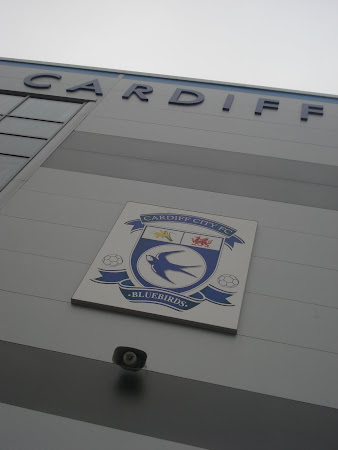 Perhaps on this occasion the atmospheric apathy could be attributed to the fact that the game appeared to be done and dusted after 30 minutes. Goals from Bellamy, Chopra and Bothroyd put Cardiff into what looked like an unassailable lead. A minute later however, it was 3-1. Will Buckley, the December choice for 'NPower Championship young player of the month', slotting home from close range. Danny Graham, the leading scorer in the division, missed a fantastic opportunity to add to his impressive total just before the break, and we sensed that Watford weren't quite done yet.

The start to the second half further fanned the faint flames of hope with another of Watford's in-form youngsters, Marvin Sordell clipping the ball over the stumbling Cardiff keeper and into the top corner. 48 minutes gone and it was game on.

Watford continued to push for an equaliser and totally dominated proceedings. Will Buckley continued to prove influential - the number of times he was on the wrong end of a crude challenge testament to his involvement. Indeed it was Buckley who had the ball in the back of a net, finishing with a deft back heel, only for a marginal offside call to go against him. The male linesman was correct. Just. The same player then clobbered a fine effort against the left upright with Tom Heaton beaten.

Predictably, the waves of Watford pressure couldn't last and eventually Cardiff got the fourth goal needed to bury the game once and for all. Revenge for their 4-1 defeat at Vicarage Road in December was sealed. I'd come into this game wanting a result. Something that would allow me to start dreaming about an exciting future for my team. I didn't get it. I got something far more valuable.

In witnessing this defeat, I saw the true colours of the 2010/11 Watford vintage. I saw a fearless, confident, competitive group. A team with talent and tenacity in equal measure. An organised defence, a tough midfield, tricky wingers and on song strikers. They are a team that simply does not give up.

I'm sure someone famous said something about learning more about people in defeat than in triumph, and it was Watford's ultimately fruitless efforts in Wales that made me realise it isn't important where we eventually finish this year. What matters to me is that the team I support are giving it 100% whenever they pull on the shirt. I care deeply about Watford Football Club and this trip showed me that the current crop of players do too. You know what? That'll do for me.

Follow Rookery Mike on Twitter
You can read more of Mike's work and hear his Watford FC podcast 'From the Rookery End' by visiting www.fromtherookeryend.com
- Feel free to comment below -
Posted by Danny Last at 23:21

The impact of domestic violence on women and their families is shared wonderfully here. But this is not the thing for which i was surfing for. I need some online it support herts. Please share something regarding that.

Women is very important part of our socity and should mobolink and wotk as men ,