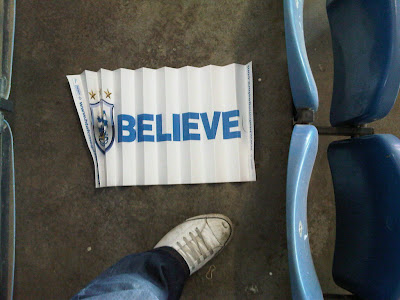 That's Entertainment
Huddersfield Town* 3-3 AFC Bournemouth (18:05:11)
Ladies and gentlemen, Mr David Hartrick.....
Right, let me set this up for you.

I'm a Brighton fan - this is common knowledge but what you may not have realised is that I live in Huddersfield. This can be problematic as most of my mates are naturally Huddersfield Town fans (Brighton being beaten 7-1 the season before this made for an interesting few days let me tell you) but if I want a live football fix on my doorstep, I have to head to a Town game.

For example, I hate the name of the stadium - the Galpharm. If you say the word 'Galpharm' out loud it sounds like a noise you'd hear in the jungle at night and not a 'I'll sit out here and make sure nothing gets in your tent' sound, more a 'run, that thing that goes 'Galpharm' all the time is here and it will eat you' sound.

Also I don't like light blue and white strips on their shirt. It's like someone's taken a Brighton shirt and washed it to within an inch of its life.

But on the flip side there are things I like. The urinals have little dividers in them so rather then crowding in, everyone knows it's four to a trough and no splashing. This is particularly pleasing when you've had a few sleeves and need to frequent them more than once during a game. I also like the fact there are trees behind one of the stands, if you squint your eyes you could be anywhere in Europe.

So basically going to a Town game is a whole mix of emotions and more often than not an excuse to get Carling Extra Cold into my bloodstream but in a legitimate fashion when it comes to explaining things to the wife. 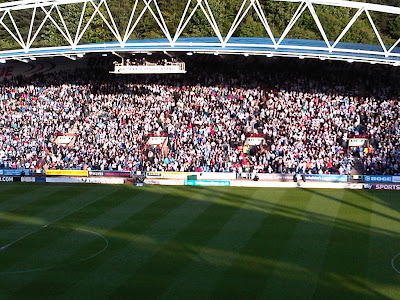 I decided to go to the game for two very good and very valid reasons. Firstly, it was a chance to effectively see a cup game perfectly poised after the drawn first leg, potentially a great game for a neutral. Town and Bournemouth have both been terrific attacking units this season and the prospect of two evenly matched teams slugging it out was intriguing. Secondly, I fancied a few pots.

And so I met up with my usual band of Town mates - most season tickets holders - and headed to the game. Joining me were Billy Elliot (so called because he looks like Billy Elliot funnily enough), Bo (from the surname Ramsden, Ramsden to Rammy to Rambo to The Bo to Bo), Marsey (based around his second name - slightly boring), Bobby, Scott and Steve (so called because that's their first name and not everyone can have a 'cool' nickname).

First port of call was Ricky's for a quick pint(s) before the game. Now anyone who knows Huddersfield will be thinking 'Ricky's? That's where they put a load of strippers on isn't it?' and you'd be right but trust me, I was only there to make sure I was still morally outraged by the reducing of women to mere sex objects. After begging not to go *ahem* I was dragged there only to find out it was so busy, there'd be no turn on. To be honest with you I wasn't bothered either way, the last six strippers I've seen down there all had either caesarean scars or unsightly birthmarks so I was happy to head to the ground to have a drink there instead.

Now to cover the match I thought the best thing I could do as a neutral is bring you a blow-by-blow account of what turned out to be a cracker. Now this may not be the match report you might get in your newspaper but who do you believe, a man at the game or a journalist? (*disclaimer, journalist may also have been at the game*) I went about this by making notes and I feel the best thing to do is present these to you unedited for you to make your own minds up.

0 to 10 mins: Town massively on top but not carving out any chances. Bar had run out of lager by kick-off - rubbish. Had a wee and the dividers in the urinal cheered me up.

10 to 25 mins: Home crowd is buzzing, Bournemouth have got back into the game but there's a real lack of quality from both sides. Watching Kevin Kilbane to see if he should be playing at a better standard than League One. He shouldn't.

26 mins: Lee Peltier scores for Huddersfield to put them one up, tidy little header and crowd goes wild. I clap politely and smile at the trees ahead of me.

27 to 40 mins: Town knock it about a bit sitting on their lead. Need another wee but manage to stifle it for a while. 5 minutes before halftime I give the boys the nod and say I'll get the round in before the queue comes, nothing's really happening so I won't miss anything.

41 to 45 mins: Miss Bournemouth's penalty equaliser and Danny Ward's goal to put Huddersfield back in front. On the up side I do get to watch a man behind a counter struggle to work a till or get his head around the order '6 bottles of Magners (no beer left) and a meat and potato pie please'. I hear both roars, one as I queue, one as I shout the number 6 at him for ironically the sixth time. 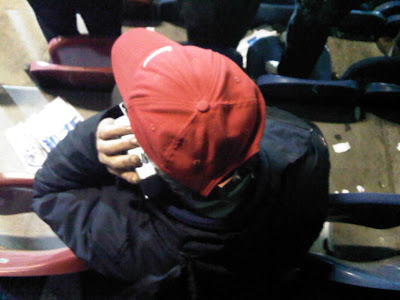 Spotter's badge, man listening to commentary on a tranny
Halftime: Chill out, Town fans relaxed now back ahead. Eat meat and potato pie made almost entirely of pastry and potato. Would go back and complain but just can't be bothered to stand shouting the words 'there's no meat in my pie' at someone who doesn't care.

45 to 62 mins: Game gets bitty but I'm not really watching, pie lying heavy and repeating - far too peppery.

63 mins: Bournemouth equalise again with a great goal, Town's marking shocking. Point out that their marking was awful and nearly start a riot. Pie still working its way down.

64 to 90 mins: Bournemouth work their way on top but can't force a clear opening. Pie works it's way down and is in real danger of forcing a clear opening within me.

104 mins: The Cherries break and score a great goal, tidy little header put away by Danny Ings. The natives are as restless as bag of wasps. I'm just happy pie is no longer an issue.

105 mins: The ground explodes as Anthony Kay nods in an equaliser. This has been a great game for the neutral, an awful game for fans of either club. Kevin Kilbane is still poor, a sighting of Danny Cadamarteri on the Town bench reveals he is now the size of a small terrace house.

105 to 120 mins: Long ball after long ball from each side, terrible challenge brings a red card for Bournemouth's Jason Pearce but both sides look like they just want the game to end. Lovely little goalmouth scramble right at the end of the game, we're miles away from it so it looks like a load of men in football shirts playing Twister.

Penalties: The drama of a live penalty shoot out - seeing as I don't care who wins, brilliant! Grown men bite their nails, the word 'believe' is used far too much. The crowd sing 'there's only one Ian Bennett' to Town's goalkeeper, fairly certain there's not, Bennett's a really common name. Unfortunately the idea of there being more than one Ian Bennett consumes me and I miss lots of the penalties as I weigh up sitting down with the phone book to check. People miss and people score, Town win and the ground goes bat-shit for 10 minutes, textbook pitch invasion ensues. Wander out into the night for another beer among a joyous throng of Town fans, remain utterly indifferent unless asked to which I reply 'the Town are going up' at the top of my voice. 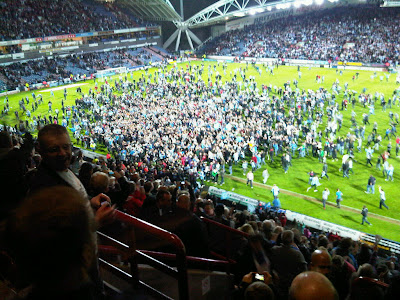 Textbook pitch invasion
So there you have it, an undercover Brighton fan at a Huddersfield Town game swept along on a wave of light blue and white striped success. Am I going to Old Trafford for the final?

A couple of panoramic snaps from the away end for good measure? Aye, why not.

Thanks to Boscombe fan Ben Stanley-Clarke for those.
You can follow both David Hartrick and European Football Weekends on Twitter
You can also read more of David's work HERE and THERE.
- Feel free to comment below -
Posted by Danny Last at 13:45

There you are! He did it again, he said 'sleeves' - my new favourite word in English :)

Thank you, David. The rest isn't bad either.

Another cracking read - Amazed that Miss Bournemouth is taking the penalties though ....

"The urinals have little dividers in them so rather then crowding in, everyone knows it's four to a trough and no splashing."

These are the things we need to know and he delivers !

Piss, pies and run out of beer.
Ah football... the beautiful game.

another excellent read? What a load of tripe. Some bloke with a chip on his shoulder who thinks hes a journo..

ive just wasted 10 mins on this.. I'll never get that back

I read this article whilst sat on the toilet with the runs...cheers.

@ Mark, may I recommend this website for your reading pleasure: http://news.bbc.co.uk/sport2/hi/football/13356811.stm

I have no chip on my shoulder & I certainly don't think I'm a journo, I'm barely a writer to be fair. If you thought this was bad, you should see my other stuff.

I apologise for you having to read this 'tripe' but when you complain about wasting 10 mins on this that you'll 'never get back', I would also point to the couple of minutes you took to leave a comment. You'll never get that back either.

Talking of urinals and minimal splashage, in some pubs in Germany they have a plastic goal and a ball positioned in the actual urinal. It's just about the best thing I've ever pissed in.

@Ron - well done for running with the toilet theme.

@Mark - the bog is probably where your comment belongs old chap.

Great stuff Hartch, loved it. And the wrongness of light blue and white stripes is a point always worth making.

Thank god you mentioned the pies, bloody awful and expensive, no meat, unless it was a meat flavoured sauce.

Shocking, does not score them highly on the YFW scale

Unfortunately, not many people have urinals at their home.

I'm not sure Mark's opinion counts.
Anyone who spends a whole 10 minutes reading what took the rest of us a fraction of that time must surely have been following the words with his finger and moving his lips at the same time.

If there was an equivilent of writing a reply in crayon then Mark has just managed it.

Keep up the good work mate.

Well I thought it was funny, the article not the result, I'm a Bournemouth fan. And as for for the journo comment he is a lot better than the ones that we have down here.