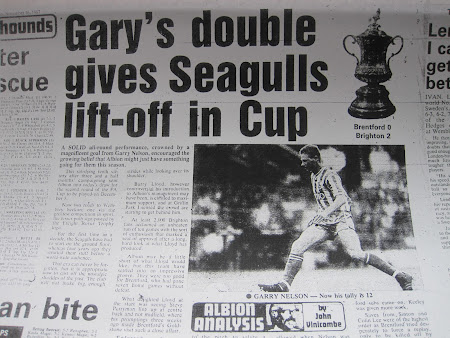 My Favourite Ever Goal
Tonight at Griffin Park, Brighton and Hove Albion will trot out onto the pitch to try and maintain their push for promotion into the Championship. For myself, and I suspect 2,000 other Brighton fans that were there that day, a trip to Brentford will always evoke memories of an FA Cup tie in 1987 and that goal, my favourite ever goal.

It was scored by Garry Nelson, a player who graced the Albion shirt with his silky skills for 144 appearances scoring 47 goals. Goldstone Gaz was, and remains to this day, a Seagulls legend. He has since gone on to become a best-selling author with his two books Left Foot Forward and Left Foot in the Grave?

So why was this goal so special? The fact that it was scored before the days of the internet and wasn't even televised (imagine that kids), means I might have embellished its greatness over the years. So let's not take my word for it. I went down to Brighton Library this week to see what the local paper, the Argus, had to say about it at the time. John Vinicombe (of course John Vinicombe) was in the press box:

Nelson rated his 68th minute strike as the best of his nine years in the game, and that is saying something. Albion were shading the second half when he took the ball off Keith Jones just inside Brentford's half and then proceeded to bamboozle no fewer than five defenders before unleashing that rocket-powered left foot. The ball must have been a blur to Gary Phillips as it tore into the top corner."Every time I looked up there was another defender coming at me, and I was thinking about the rollocking I would get from the lads if I missed after all that," said Nelson. Instead, the fans spilled on to the pitch to salute a memorable goal. 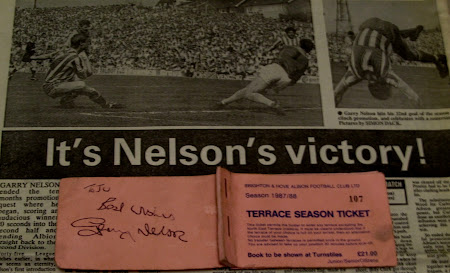 More Nelson magic in the Argus and a season ticket (costing £21, sir) signed by the great man.
And God bless Garry Nelson, because fast forward twenty four years and EFW caught up with him after a recent skiing trip to discuss his memories of that strike:

“think the game was very even going into the last half-hour. I remember nicking the ball off Keith Jones (later to become a team-mate of mine at Charlton and a very good team-player!!) and turning away from him I suddenly had one opponent that I managed to go round in the centre-box, another one and then another one – they were set up almost like a set of cones on a training ground dribbling exercise!!! Having broken clear of them I then had a run at the retreating centre-half. Threw in a couple of shimmies which slightly unbalanced him on the edge of the box and was then into the penalty box but at a fairly tight angle!! Screaming at me throughout to my right was Kevin Bremner asking (polite version) me to pass as he was in a great position and certainly more central. In for a penny in for a pound with the adrenaline pumping decided instead to shoot, possibly risking my short-term health prospects if I missed. Happily I caught it an absolute peach and it flew past Gary Philips at the near post. It wasn’t the most important goal I ever scored but in my 156 first team goals I rate it my best! I think these days I may have got a yellow card for prompting a pitch invasion but the fans reaction to the goal was almost as good as the feeling of scoring – they went crazy!!! I also remember that a Brentford regular sent me their local newspaper which sportingly acknowledged it as possible the best goal ever scored at Griffin Park by a non-Bees player!"

Once you've wiped the tears away from your eyes, and seeing as I made the effort to go down to the library; do you want to know what else was in the local paper on Monday, November 16, 1987? Oh go on then, whilst we're about reminiscing:
After seeing off Northampton in the next round - they gave us an extra stand in the end - the Albion eventually went out of the cup to Arsenal. Not before Nelse had notched a flying volley for one of his 32 goals that season. That particular goal caused one of the biggest terrace surges in North Stand history at the Goldstone Ground. Ah, they were the days.

Tony Adams looks on aghast as Garry Nelson notches with a flying volley against Arsenal.
Follow Garry Nelson and European Football Weekends on Twitter.
What was your favourite ever goal? Feel free to comment below...
﻿
Posted by Danny Last at 11:55

I was also at Griffin Park that day and firmly believe it was the greatest goal ever scored. Anywhere. Ever.

For good measure Goldstone Gaz rounded off the day with an injury time penalty and beers were sunk in The Windsor Castle with merry , and if you will , abandon.

Jimmy Phillips for Bolton against Wolves at Burnden Park in 1995 for me.

Had been to a few games before then but wasn't really getting into football too much - until I got a great view from right behind the net just as "Jiminho" bent a 30-yard drive into the top corner sending the Lever End wild.

50p for a ticket with Junior Whites back then too, great days

Great read, Danny, and a medal for getting the microfiche out of the library.

Before my time this, can't believe it's not captured on film. Do you know if Garry talks about it in his books as well ?

What a brilliant day that was. 2000 of us packed in behind the goal In which Nelson scored. I went loopy and remember it like it was yesterday. Which it wasn't.

It changes weekly but the best goal I've ever seen from the opposition at Portman Road was a 40 yard swerver from Leighton Baines for Wigan. I was right behind the flight of the ball at the other end of the pitch but you could see it move around, well, just about as it went so fast.

The North Stand raised a collective eyebrow and the constituent parts turned to each other to nod in appreciation. There was even a small pocket of applause from those right behind the shot.

@Damon That sounds exactly like this goal, which I was sitting directly behind at the time:

The Large One - I lost my glasses in the ensuing melee. They got knocked off and went flying down the terrace - a terrace with a major surge going on. This was going to cause quite some consternation as it was supposed to be me doing the driving home later, and I can't see a thing without them. I eventually found them about three minutes later, on the terrace about 20 feet from where I was originally standing.

In one piece, without a scratch.

Martin F - I was there as well TLO and it is the best ever. If I remember correctly we had the whole of one end and part of the side (which had a roof). I was standing on the side and had a perfect view of his mazy run. The excitement building as he went passed defender after defender, then his left foot thunderbolt which was so quick that when it hit the net time seemed to stand still...it made you take a large intake of breath.....and then absolute bedlam as utter joy poured out from the terraces.

Gully 1968 - OMG!! I was only telling my Son about that goal on Saturday. I can't believe that you posted this today. Thanks very much. Reading that, my son knows I wasn't exaggerating what a great goal it was.

Jimmy Saville - Brilliant. That moment is frozen in time...in my head. I was 18 the following year. I can't remember my 18th birthday at all but I can remember that goal, the celebrations, people getting kicked out etc

TRHK - Brilliant article - thanks for the reminder.

I seem to remember that the last defender was Steve Perryman, in his post Spurs days. 99.9% of the time the attacker would have cut inside him - and Nelson going round the outside completely bamboozled him.

Isn't it odd that having seen thousands of goals, and scored hundreds - there are just a few that spring into mind when someone says 'best goals ever'. And they're not always the best because of quality - sometimes its the occasion. Like Gazza against Scotland in '96, Platt against Belgium 1990 and Gerry Ryan against Liverpool in 1983.