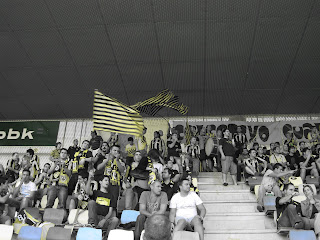 Barakaldo 1-0 CD Mirandes (13:09:09)
- click on photos to enlarge image -
I didn't count them all but I'd guesstimate that Bilbao has roughly a thousand bars which are all - almost without exception - absolutely fantastic. Their two line metro system is easy to negotiate and I almost need to do a wee of excitement at this juncture when I tell you; they also have four football stadiums within 12 metro stops: Athletic Bilbao (San Mames), Portugalete (Portugalete), Sestao River Club (Sestao) and our new favourite team Barkaldo (Barkaldo). Throw in delicious pintxos in each of those thousand bars plus the fact it's a city totally obsessed with football, and I think you'll agree we've found our ourselves 1x quality EFW destination.

This was one of those special days that one can only dream about. On the morning of the match I had my own personal guided tour of the Athletic Bilbao, San Mames Stadium aka 'The Cathedral'. After I'd calmed down from that I was back in town to become an afternoon Txikitero (one who likes a pub crawl) with my cuadrilla (Spanish girlfriends). So far so good.

As it's blessed with so many bars, Bilbao is rightly famous for its pub crawls. Locals spend no longer than twenty minutes in each establishment before moving onto the next one - which is normally next door. After a glorious afternoon I left the girls - who by now were singing traditional Spanish/Basque Country drinking songs - and staggered up to the footy via a brief visit to Las Llanas the home of Sestao River Club. I told you: it's stadiums o'clock around those parts (give me strength - Ed.), and this one had lovely floodlights (let you off - Ed.).

Upon exiting the metro at Barakaldo I bumped into a chap called Fran. He was to become my best mate for the next two hours. He introduced me to Alain and between them they told me all about Barkaldo and the new fan club that they were trying to get off the ground. The BARAKALDO AURRERA membership currently stands at just 17 but hey, it was their first day of recruiting.

The locals in the stadium bar weren't drinking beer. They were on orujo - a transparent spirit with over 50% alcohol content and only a hint of honey and herbs to make it (just about) palatable. Oh well, when in the Estadio Nuevo Lasesarre as they say. Said bar was also full of away fans! Fair play to CD Mirandes on that score. I never expected them to bring any support, and they did to the tune of around 350 - vocal as well. 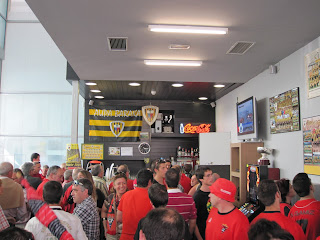 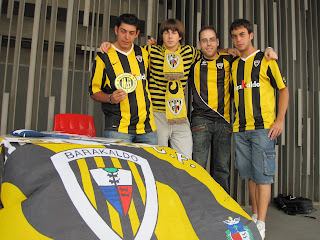 Recruiting for the Barakaldo Aurrera. 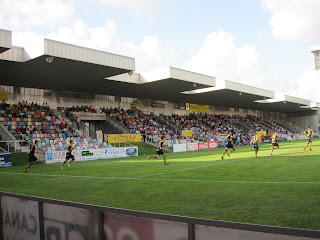 The 'Fabriles' sprint (sprint!) onto the pitch at the start. 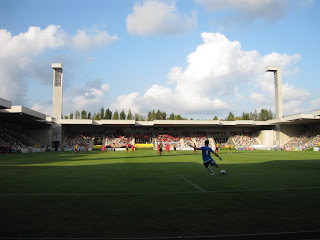 A couple of things stand out to you? 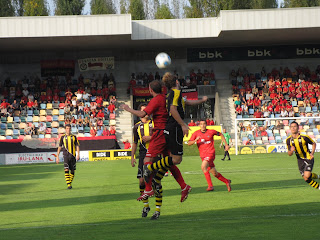 Heads Atomic Dustbin.
Inside and after three renditions of You'll Never Walk Alone and four bursts of the club anthem we were underway. Neither side managed to fashion a chance in the first half which gave me ample time to just sit and stare open mouthed at the floodlights. I know we have an unhealthy regard for them here at EFW but my word they were magnificent.

I'd been told that no alcohol was available inside the ground. Happily those fears were proved unfounded. A little 'under the counter' activity soon had us opening some 6.5% cans of beer. I think they were called Keller although they felt a bit more like Killer. I was pleased that I'd turned down the clubs kind offer of press accreditation, because I was in amongst the Colectivo Gualdinegro ultras, making friends and futhermore I was about to fall in love....

Eli Vicario Fernandez I love you! What a lady! She may be 80 years old but Jesus H Christ I wish she was my Grandma. Eli had the horn alright. She also had a flag, scarf and was a joy to behold. When Barakaldo opened the scoring in midway through the second half she sprinted past me like a spring chicken, reached for her horn and gave it a bloody good airing. "ELI ELI ELI" sang the Colectivo Gualdinegro and I couldn't help but join in. Hats at a jaunty angle to you Eli - I hereby award you an EFW gold membership card. 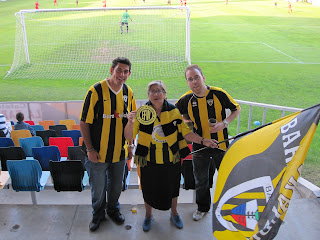 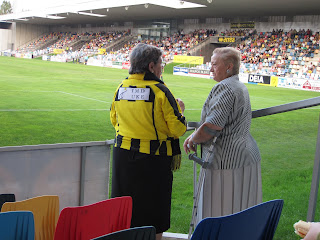 Eli and her mate plan their next ultra display. 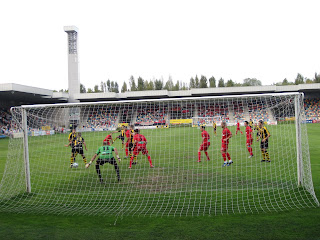 Platero opens the scoring with that back heel. 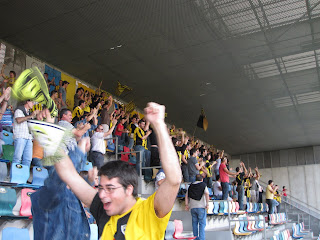 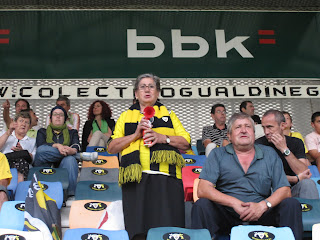 Eli gets the horn.


The goal itself was fantastic. Platero found space in a crowded penalty box and as the ball came thundering in he showed us how he does his trick, the one that makes us scream Eli Said. He only sent the keeper the wrong way with.....wait for it.....a back heel (back heel!). Just. Like. Heaven.
A jubilant Fran and Alain came running down the stands after the game. We had our only dodgy exchange of the afternoon when Fran kept shouting 'I love fuck up' to me. Turns out he was saying 'I love FA Cup'. How we all laughed. Good old beer and football.

Back in Bilbao after the game the streets were strangely deserted. Where was everybody? In one of the thousand bars of course, watching Athletic Bilbao win away to Xerez. They are football obsessed I tell you, and so some might say are we. Cheers! 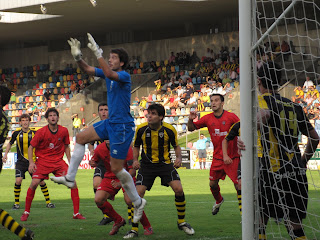 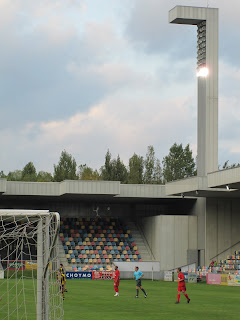 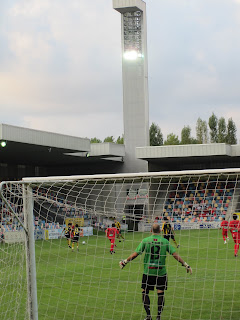 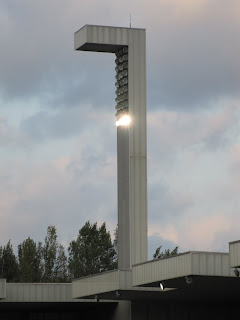 One last look!? Oh go on then!

This was the stadium I was telling you about on Google Maps!

Those floodlights are a thing of beauty. Glad you posted pics of them.

I think I might have alluded to this recently but it is now confirmed. In addition to a healthy following in the Pacific Northwest EFW is the most read soccerball blog here in St John's County - North East Florida to you.