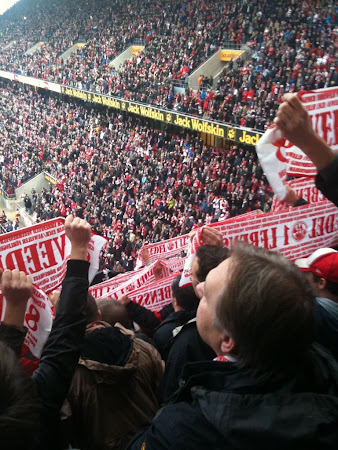 Fußball Kommt Nach Hause*
Karlsruher SC 1-1 FC Erzebirge Aue (12:11:10)
FC Köln 0-4 Borussia Mönchengladbach (13:11:10)
by Garreth Cummins
In the latest instalment of 'readers lives', Garreth Cummins talks us through his European Football Weekend in Germany. Garreth - a Liverpool supporter - works for the Football Supporters' Federation (FSF) as an International Officer:
Three travelling companions and I eschewed our usual weekend spot, which would have seen us on the away terrace of one of our least-favourite Premier League grounds this weekend past, to head to Germany. For us, the excuse of avoiding a disliked away trip coupled by paying a visit to our friend Al, who is spending the year working in Germany, and sampling some of their world-renowned fan-friendly experience was too good to turn down.
After landing in Munich we headed first west to Karlsruhe to watch the home team, currently languishing near the foot of Bundesliga 2, entertain high-flying Erzgebirge Aue on the Friday evening. For some of our band the highlight of the trip was to be the following day's trip to Köln for the Rhein Derby against hated neighbours Borussia Mönchengladbach, but for my money (all €11 odd of it), the Karlsruhe game was the pick of the weekend's action. Standing tickets? Beer in the ground? Walking to the stadium from the city centre? Some misguided sense of obscure, non-top flight cachet? Former Intertoto Cup Winners? It had it all. 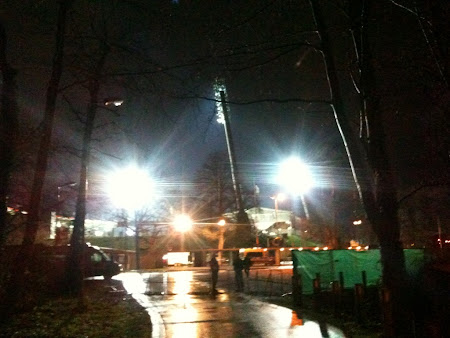 Friday night at the Wildparkstadion. What's not to like?
We positioned ourselves on the north terrace, just to the side of the main band of KSC ultras, the majority of whom had the protection of the roof that we sadly did not – still, it’s not proper standing on an open terrace unless you get a little bit wet, is it? They provided much of the entertainment in a very poor first half, aside from one of the more bizarre goals we're likely to see all season - the visitors opened the scoring from the edge of the box early on, after a block tackle from the home centre half rebounded in off the advancing centre forward and flew past the keeper. Their fans reacted in the only way possible - hurling their plastic beer containers over the perimeter fence and onto the running track in disgust. No small act of defiance when it means you lose your €1 deposit. 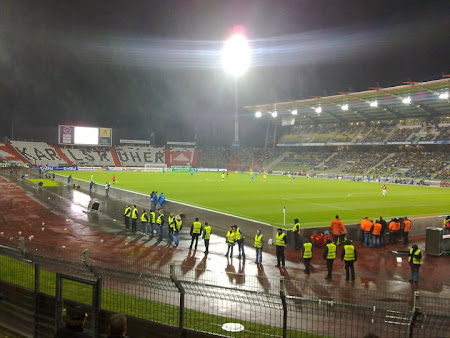 Karlsruhe's opponents Erzgebirge Aue [Urts-gi-burger Owa] surely ranks as the most German sounding team of all-time?
Karlsruhe's equaliser, when it eventually came some time into the second half, was a 20-yarder of real class: the only recognisable name on the teamsheet (to us, anyway) Alexander Iashvili driving home a half volley from the edge of the box with the outside of his right foot. More beer cups rained down on the track - it appears that any extreme of emotion is enough to bring a Karlsruher to flagrant disregard for his or her deposit. Were it not for the referee bottling a late penalty decision, Karlsruhe would have taken their first win in 5 at home, and the stewards would've been even more handsomely rewarded for their night’s work stood out on the running track. 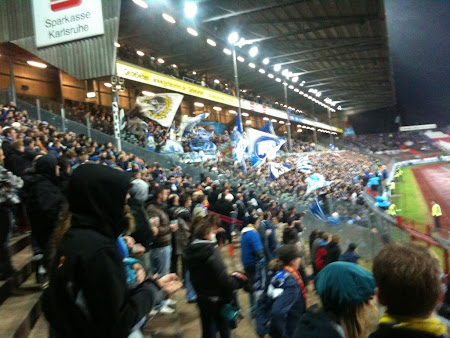 KSC Fan-tastic
Warmed by our new found love of KSC and their flag-waving fanatics (that, and the excellent Feuerwurst on offer at the Wildparkstadion), we absented ourselves to a downtown hostelry. In finding a table in the packed post-match throng, Al introduced us to a fellow Köln supporter, Marius, who had the misfortune to be missing the biggest game of the season the following day owing to a lack of funds. His friends had offered him a ticket, but just before payday he couldn't afford both the ticket and to travel the few hundred kilometres north. A quick whip-round later, and Marius was frantically on the phone to his friend to ensure the offer of a ticket still stood. For a small price each we'd nabbed ourselves a personal guide to Köln, which we thought was excellent value, and a rather friendly gesture to boot.
Travelling at over 300 km/h with a hangover doesn't sound like the best of experiences, but the excellent German ICE train sped the six of us to Köln early (too early for my liking) the following morning. Marius negotiated us through the city's S-Bahn system, arriving at the ground a few hours ahead of kick-off to sample the atmosphere. Despite being early, the tram to the ground was packed, and rocking with a number of derby day songs as we made our way to the Rhein Energie Stadion. My personal favourite (and fast becoming my favourite football chant of any side anywhere) was the rather choice 'Gladbach pigs, Gladbach pigs, Gladbach pigs; we'll fuck you all up the arse, you wankers'.
It doesn't rhyme in German, either, for the record, but it still gets the point across. 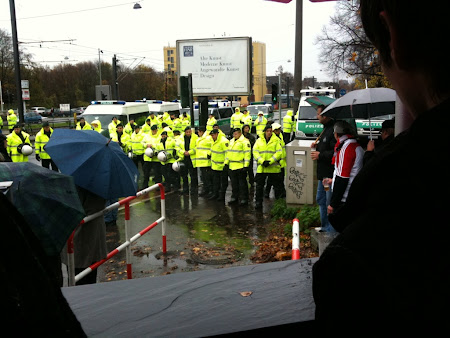 The welcoming committee at the Rhineland derby.
Our greeting at our matchday pub of choice, around 500 yards from the ground was not what we could call warm - the police were out in force, and pointed out to Marius that were he to cross the road as he was requesting, to get to another pub, that they would arrest him. That being the case, we decided where we were was probably alright for now. So we drank our Kölsch, and marvelled at the passing effigies of horses being hanged on mocked up 6 foot tall gallows that we were assured by our hosts were perfectly normal for derby day am Rhein. 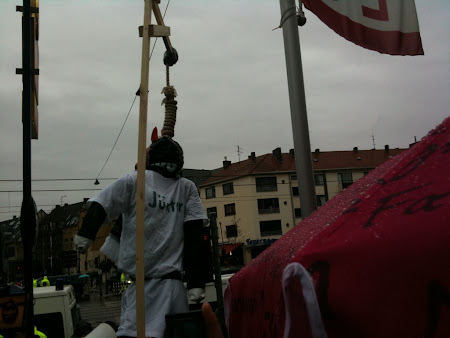 Relax - it's derby day. This is all perfectly normal, apparently.
Soon after, the presence of the police was both expanded, and explained. The first of 4 trams of visiting fans was being escorted up the main road, and past our drinking den, accompanied by at least 20 police vans. It was as they reached the pub that we heard the first firecrackers explode, and saw the first of the number of fans who'd gathered at the front of the pub returning towards us with their eyes streaming from the tear-gas. The Köln fans' efforts were repeated a subsequent 3 times, and only some time after the final tram had passed (and not long before kick-off) we were allowed to make our way to the stadium.
Unfortunately our band of five were split into three separate areas of the ground, and although I drew the shorter straw of being on my own (my half-time conversation with my neighbour was interesting, albeit brief) that didn't detract from my enjoyment of the whole experience. If you think that You'll Never Walk Alone is a great pre-match anthem, you want to try taking in the full 6 verses and choruses of De Höhner - the words are up on the big screens for tourists such as ourselves, even if they do make it slightly difficult by putting them up in the Kölsch dialect rather than in German (although I suppose if you don't speak German the fact they are in a dialect rather than 'normal' German is probably lost on you anyway). 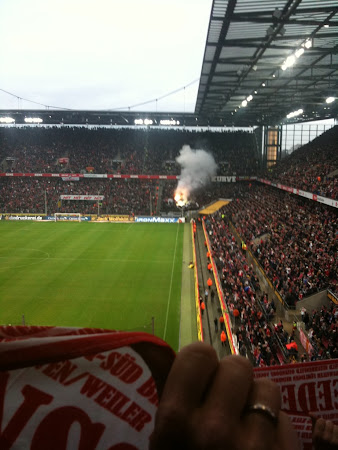 Flares are still trendy in Germany.
The impressive pre-match rendition, alongside the flares and smoke-bombs in the away end sadly gave way to something of a tepid first half, not helped by the deluge in the days preceding the game which led to players sliding all over, and the ball stopping mid-dribble and mid-pass in puddles on the pitch. The second half, however, was as surprising as the first had been uninspiring - Gladbach, much to Marius' doubtless chagrin, and that of the majority of those in attendance, ended up worthy 4-0 winners, largely courtesy of Köln’s very accommodating (or abject) defence.
By the time we met up on the tram afterwards, we think Marius was silently cursing our generous act in getting him to the game. He probably wished he’d stayed at home, and when we saw our team’s performance that evening in a Köln bar we were glad we hadn’t.
You can follow both the Football Supporters' Federation and European Football Weekends on Twitter.
The FSF is free to join. CLICK HERE to do just that. Well, what are you waiting for?
FSF Website and Facebook Page.
(*Football's Coming Home)
- Feel free to comment below -
Posted by Danny Last at 11:10