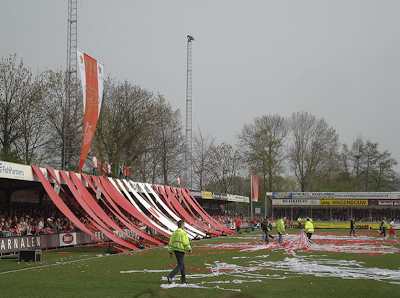 The Spakenburg Derby
IJsselmeervogels 3-2 Spakenburg (16:04:11)
It's one of the favourite games on our calendar: the derby of derbies in Spakenburg. Timing wasn't great for us this year though as we had a prior engagement in Ostend. Luckily, our friends at Stadiongebod were on the scene to report back....

There's Liverpool vs Everton. Manchester has got City vs United while Milan is Inter vs AC. But who needs all this red and blue city rivalry when you've IJsselmeervogels and Spakenburg?

Twice a year the charming little town of Spakenburg (population: 16.000) suffers from a severe case of derby fever when two non-professional teams, the Rooien (Reds, IJsselmeervogels) and Blauwen (Blues, Spakenburg), are about to clash. It is the time of the year that true colours are to be shown.

It is said that when you're introduced to your parents in law in Spakenburg, they are more concerned whether you support the right team than the future plans the two of you might have. In Spakenburg, the team you support is also your identity. You're blue or a red in the first place. 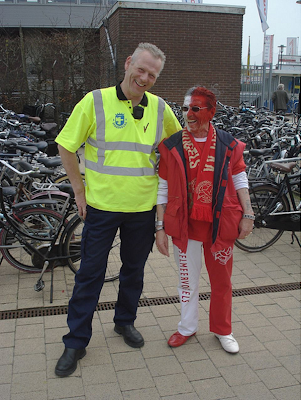 Note to self: order pair of IJsselmeervogels trousers and shoes 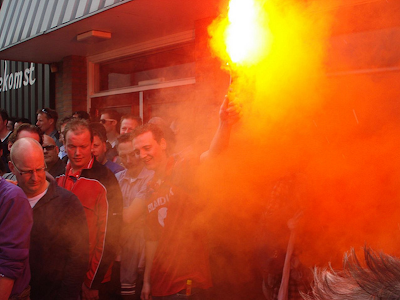 No lighty, no likely
Surely, there are enough derby's in the Dutch leagues but this one getting more and more popular amongst football fans around the country.  All in search of the football authenticity they are becoming more and more deprived of in professional football. The atmosphere, the people...It isn't hard to see why fans from Germany, Belgium or England travel all the way up to Spakenburg. This game has got everything a derby needs with the rivalry of the two stretching far beyond the colours of their kits.

First, the backgrounds of the teams. IJsselmeervogels was established by labourers and fishermen whereas Spakenburg (ironically established as Windvogels and later Stormvogels) is the club of farmers and clerks. Secondly, there is a huge difference in success. IJsselmeervogels is by far the most succesfull team beating Spakenburg on league titles (31-6) and over-all championship in the non-league (6-1). And the rivalry is reflected by their accommodation as well. Their stadiums which are situated next to each other are amazing for non-league standards and they take pride in showing off to each other. When Spakenburg built a new stand a few years ago, you could expect IJsselmeervogels to build a bigger one shortly after. 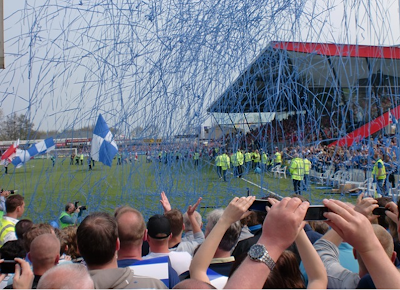 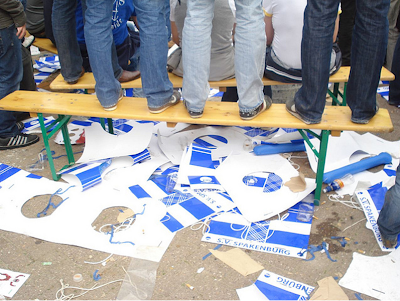 During the build-up to the game, you could feel the tension rise in Spakenburg. Everywhere you look there are signs of (half of) the event of the year. Flags and banners hanging from the windows, kids with faces painted in Indian warrior style, and their parents also dressing up for the occasion. People were hosting parties in their back gardens around the town as there was to be no alcohol served at the ground or in the surrounding pubs - until the evening. And surely, the sight of these intimate blue or red gatherings added to the buzz. It is probably what derby fever is all about. And mind you, in its infectious. I noticed I was picking up pace on my way to the Westmaat, excited about what was about to happen.

The stadium was packed to the rim with a capacity of approximately 9,000 (that’s over half of the population of Spakenburg!). At least those were the official numbers.  Loads of people sneaked in during the match or watched the game from the Spakenburg canteen and even from the banks outside the stadium.

After the ‘ultras’ of IJsselmeervogels and Spakenburg did their bit, the game kicked off. The tension was too much for the Spakenburg keeper as he slipped up twice gifting goals to the home side. The game had all the features you could wise for: 22 players determined to give it their best, a cheerful crowd, and handful of goals - while a dozen more chances were wasted, and some doubtful decisions by the ref. After the final whistle, and a 3-2 win for IJsselmeervoges the pitch - as per tradition - was invaded by the home supporters.

While they were celebrating, loads of people rushed off to head for the bars in town for some drinking sessions, either to remember or forget which colours they represented.

*As a footnote to this report, there were several complaints filed to the local press following this game with regards to the organisation of the derby. It was noted that fans had managed to gain access to the game despite not having match tickets. As it is, hundreds can no longer see the pitch during the match due to overcrowding. Large screens beaming the game live have been erected to partly alleviate the problem, but has the Spakenburg derby got too big for the town to cope with? 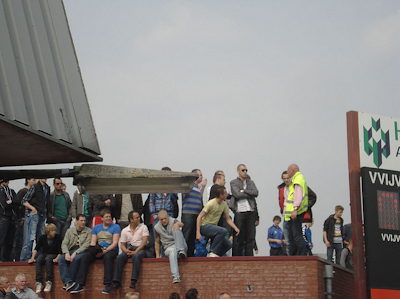 Every nook and cranny is taken. Has the derby got too big for Spakenburg?
Follow Stadiongebod and European Football Weekends on Twitter
Stadiongebod website
Additional photos by Jaap Jan Wildeboer
Like this? EFW was at the derby last year. Read all about it HERE.
If you were at the game - feel free to comment below...
Posted by Danny Last at 08:59