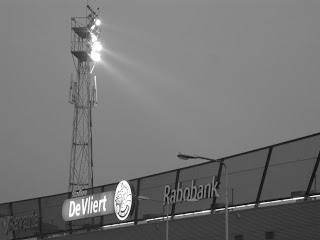 Friday 23rd October 2009 will go down in history. In years to come, it'll be remembered much the same as the 1976 Sex Pistols gig at the 100 Club when anyone and everyone claimed to have "been there". Nevermind the Bollocks though, this was the inaugural EFW Oktoberfest. A pre-arranged gathering of friends I'd previously met on trains to Rostock, in the pubs of Nailsworth, outside Pogoń Szczecin's stadium, through this website and others I'd known for years.

The plan was to take in four matches, in three days, in two different countries, with about thirty odd people 'up for the cup'. What could possibly go wrong!? Our base for the weekend was to be Tilburg in the Netherlands, staying in the Hotel Central Tilburg - rated 1 star by FIFA. Around the corner from there was the Little Devil Pub whereby the troops gathered in the early afternoon for a meet and greet session. Oh and talking of session - a few beers.

The pub (officially the darkest in Holland) did us proud. They supplied the music of our choosing, free food as well as opening early doors especially for the EFW team. In return we drank enough beers to sink a small battleship without causing any trouble.

First to arrive were Stoffers and Christian from Germany, closely pursued by Radish from Poland. He immediately won the 'best dressed' award by pitching up in a splendid green shirt with yellow tie (tie!). He was followed by the rest of the gang who'd travelled in from England, Belgium, Germany, Holland and places in between including Philip from Romania - nickname also Radish! - who was the last to arrive and yet the first to get drunk.

Four hours of male bonding later and we were on our way to this, the first match of the weekend. After a short train journey we found ourselves in 's-Hertengenbosch Oost. That hardly rolls of the tongue does it? Luckily, the Dutch cba* (*can't be arsed) with all that and as such they simply refer to it as Den Bosch. Hence their one professional football team are called FC Den Bosch. Simple.

After picking up our match tickets (€10 each - nice) we headed straight to the adjacent ice hockey stadium. Reasoning!? They served beer of course. We still had time for a few more ales and with the general theme of the weekend loosely centering around beer and football - what else were we going to do!? 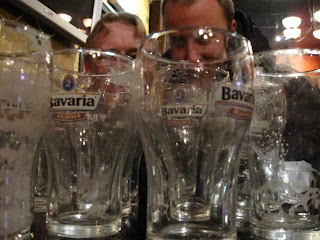 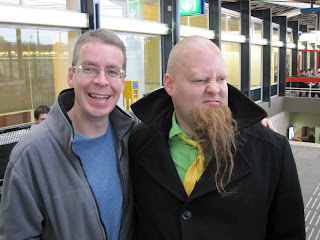 A pair of Radish. Radish Phil who flew in from Romania (left) and best dressed Polish Radish (right). 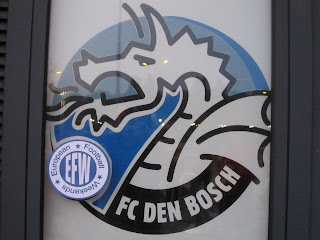 Who would have thought it!?
Punch 'FC Den Bosch' into Google and it'll return with roughly 345,000 mentions of the fact that this is where Ruud van Nistelbus started his league career. Recently, Ruud was actually rude of Dutch league football, saying he'd never return to play there due to the hatred and occasional violence that emanates from the stands. That and the fact they won't pay him an arm and two legs for his weekly wages I guess.

Anyway, at Denners (as they are not known) these days, the new Ruud is a Belgian lad called Fabio Caracciolo. He is not only top scorer for Den Bosch this season but tops the scoring chart in the whole bloody Eerste Divisie! It was he (who else?) who opened the scoring in the eighth minute for the home side. Fortuna Sittard equalised four minutes later and a further four minutes after that, it was 2-1 to Den Bosch! Three goals just 18 minutes into the first ever EFW Oktoberfest match - who needed the Sex Pistols!? This was officially the greatest game of football EVER! 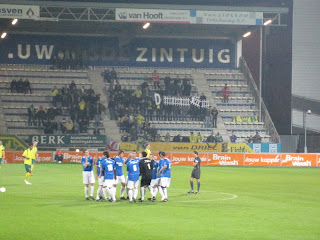 The Fortuna Sittard fans in the background launch what appears to be a display of a train track!? 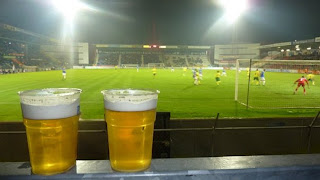 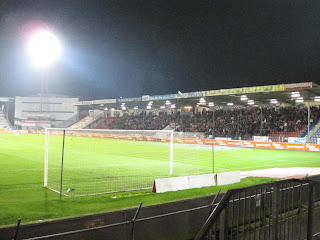 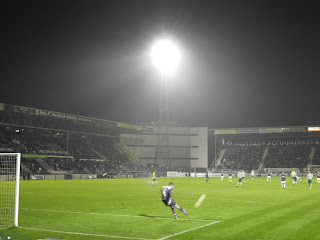 Keeper kicks ball, man takes photo. Shall we move on? 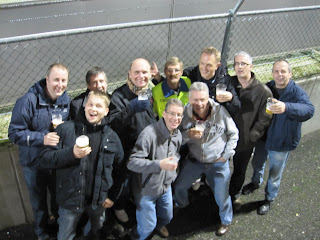 A selection of the lads and the steward who tried - then gave up - to stop the beer flowing. 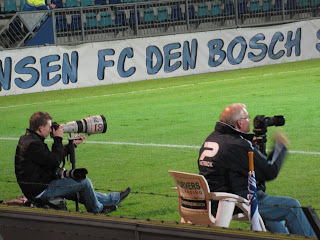 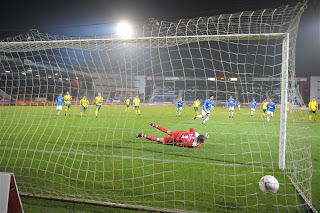 The game fizzled out after that (oh - Ed). That did give us time to both gaze open mouthed at the glorious old skool floodlights and play a few games with the stewards, namely, see if we can sneak in a beer or two whilst they weren't looking. The match finished 3-1 after Van Moorsel notched his second of the game with a late penalty. Not bad entertainment, worthy of the 10 euro entrance fee certainly and I don't think many of the 4,334 fans went home feeling too short changed.

A surreal moment occurred back at 's-Hertengenbosch Oost station after the match. As we were chatting amicably with the few away fans that had made the journey, a group of Den Bosch hooligans came running up the stairs and started bouncing along the platform armed with weapons. The Fortuna Sittard fans stuffed their scarves into a handbag (this was funny) and then ran off, whilst the hooligans tried to get their heads around why there were fans of Royal Antwerp/Preston/Liverpool/Everton/Tranmere/Leeds/1860 Munich/Forest Green Rovers/Legia Warsaw/Lewes/Brighton/Willem II/Barnet etc etc standing there. It was too much for them and they ran off from whence they came. It was all a bit Ken Dodd (odd) and very unnecessary but nobody got hurt and with that we were on our way back into Tilburg.

What better way to end to Day 1 of Oktoberfest than a marathon darts session back in the centre of Tilburg? Mirth and hilarity was the order of the night as we drank, told stories and took money off the lads from Preston. We declared around 2 or was it 3am and patted ourselves on the back for what had been an unqualified successful start to proceedings. The plan of action the next day was to go to two different matches in two different countries. To be continued.........
For an award winning video from the weekend CLICK ME
For more photos from the day CLICK ME

Also on this trip

First comment in via the email from FC Den Bosch:

Thanks for the link and your visit and the nice report!

Boss report. It was almost like you were there!

Looking forward to the next ones.

Oh and greetings from Liverpool!

RW Essen report will be on your desk tomorrow afternoon.

How's that for public service!?

Another email flooded into the EFW office today. This time from the landlord of the Little Devil pub:

You guys were no trouble at all! Thanks a lot for choosing our humble bar.

Hope to see you guys again!

Many thanks for popping on and leaving a comment Raymond!

Good luck for your 'pride and glory' for the rest of the season.