The Kids are Alright
Gornik Zabrze ME 2-1 Polonia Warszawa ME (16:10:11)
A little bruised but still buoyant from his trip to Wisla Krakow, Ryan Hubbard continues on his ultimate Polish footballing adventure...

Gornik's stadium is currently in the process of being demolished to make way for a new 33,000 seater ground; leaving three sides as a building site, and the fourth with just a 70-year old covered stand for spectators. As a Gornik supporter, one of my personal reasons for visiting this part of the world was to get to watch a game in this stadium before it was consigned to history.

Today's game was the Mloda Ekstraklasa clash between Gornik and Warsaw's second most successful club, Polonia. The Mloda Ekstraklasa is basically an Under-23's league, allowing for a couple of over-aged players in the same way as the Olympic tournament does. Although you don't get the atmosphere of a normal Ekstraklasa game, it's very relaxing to watch; and the entrance is also free, leaving extra money for a pint of Tyskie. Brilliant.

The first half saw some good football between the two young sides, but no real threat to goal; however that didn't stop the Polonia keeper from berating his back-line after every Gornik attack. The person doing the most running though, wasn't even on the pitch. Every time the ball was cleared out of play, it seemed to go over one of the fences which sectioned off the building works; leaving the two poor young ball-boys to repeatedly run around the length of the pitch to retrieve it. Sometimes there was even a second ball smashed over the fences before the first had even been recovered. The poor kids must have been knackered. 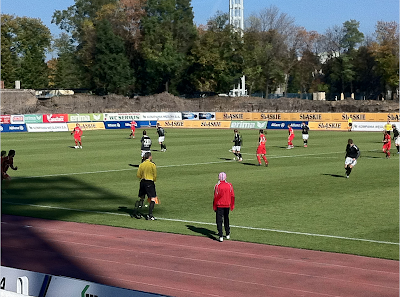 As the half-time whistle blew with the score still at nil-nil, it was time for refreshments. With the club shop closed on Sundays, we decided to wander behind the main stand in search for an elusive bottle of Pepsi (other soft drinks are also available). Once found, outside we stumbled to the sight of Aleksander Kwiek, Adam Marciniak and Michal Bemben - members of Gornik's first team - who had just returned from the previous day's game in Warsaw. With photographs saved onto the phone, we headed into the covered section of the main stand just before the second period. 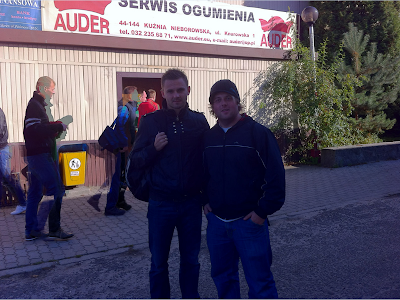 "Aleksander! Photograph? Angielsko? Nie?! Dziękuje!"
The second half picked up at an extreme pace, with 18-year old striker Szymon Sobczak grabbing two goals for Gornik in the first 10 minutes. Mateusz Michalski did manage to grab a consolation for the visitors with 10 minutes left on the clock; and as the referee blew the final whistle, we got our final glimpses of the Ernesta Pohla in its current state before spilling out into Ulica Roosvelta to hunt down a taxi to Zabrze station. 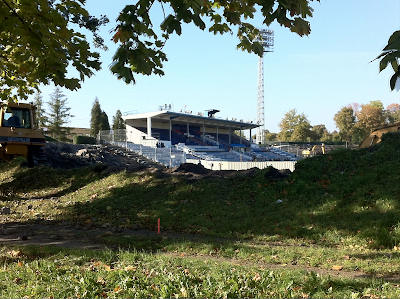 Zabrze train station isn't the biggest or the best, but it got us to the neighbouring city of Chorzow with no real fuss. Arriving at Chorzow Batory station around 35 minutes before kick-off, and the streets were full of supporters wearing their Niebiescy (blue) scarves and shirts; making the five-minute walk to the Stadion Ruchu.

I know a little about the rivalries in Polish football; but if you are unaware, don't fret. Just take a look at this excerpt from the as-yet-unwritten "Modern Football's Guide to Polish Club Rivalries".


"Piast Gliwice and Ruch Chorzow aren't exactly the best of friends, although both have a shared dislike for Gornik Zabrze. Gornik meanwhile, have a friendship with GKS Katowice. This in turn means that GKS supporters have a rivalry with Piast and Ruch. However if this is confusing, do not worry; in this part of Poland, all clubs equally hate Legia Warszawa."

Now as you can imagine, the fans were definitely going to be fired up for this one.

Inside the ground, we were quick to purchase our official club scarves - not wanting to look like an outsider in a crowd of around 10,000 Ruch fans already in full voice before taking our positions in Sektor 9, directly behind the goal.

With the sun starting to droop slowly towards the horizon of communist tower blocks, the bitter cold quickly began to kick in. The Ultras section to our right started to become very animated, but whether this was in support of their team or simply to keep warm, I couldn't possibly tell you. Maybe it was both. 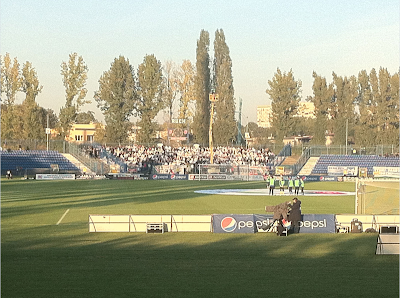 The fans from Warsaw - across the other side of the stadium to us - began to make their voices heard, with their chants of "Legia, Legia" playing as a soundtrack to their mad attempts of running from one side of the stand to another. They clearly aren't as big on health and safety in Central Europe as we are in England. They certainly aren't as fussy about allowing flagpoles into the stands as we are either, as the Ruch fans proved with their fantastic efforts towards the end of the first half. 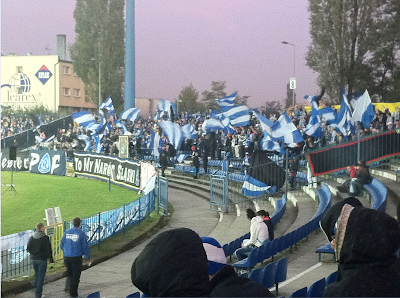 Unfortunately for the home supporters, their displays more-or-less coincided with their team going one-nil down on the stroke of half-time. Good work down the left-hand side from Michal Zyro allowed time for a cross, and slack marking from the Ruch defence gave Daniel Ljuboja space to place his header into the bottom corner.

The second half saw both sides with chances to score; Legia hitting the post from 25 yards, and Ruch squandering numerous chances to level. And with the injury time board lifted, we headed to watch the last few minutes from the top of the stand allowing for a quick exit towards the tram stop. Despite the Niebiescy supporters willing their side on, Ruch's day was summed up with practically the last action of the game. A corner kick was drifted in, and with a straight line-of-sight towards goal, the advancing Ruch player swung his foot - only to completely miss the ball.

After waiting 15 minutes for the number 7 tram to arrive, along with several Ruch fans we made our way onto our carriage back to Katowice. After stopping to allow the Legia supporters buses past, our tram was hijacked by around 100 Ruch fanatics - intent on causing a little trouble. Singing songs about their conquerors Legia (which I can't possibly repeat on a family-friendly site such as EFW), drinking some cheap-looking Polish lager and destroying the vehicle in the process. It was only when the tram was surrounded by around 40 armed police, who then proceeded to drag the troublemakers into the Chorzow streets, was the tram finally allowed to continue its journey.

Back in Katowice, some of our remaining zlotys were spent on pizza, fries and 3 pints of Tyskie (all for less than a tenner); before heading to the Sky Bar, to reflect on our Polish Football Weekend with a view over Gorny Sląsk from 27 floors up. 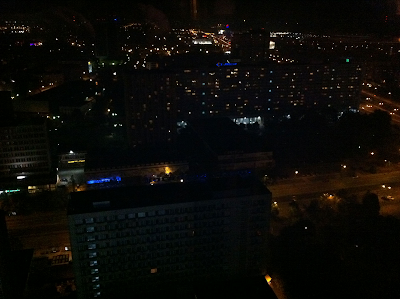 Dziękuje Polska, i'm sure we'll see you again soon.
Follow Ryan Hubbard and European Football Weekends on Twitter
Ryan is the Editor of Modern Football and Los Revolucionarios
Posted by Danny Last at 09:14