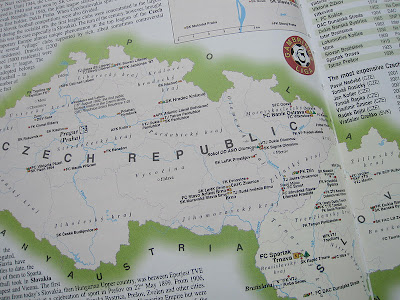 News in brief
In a nod to my favourite thing of all time ever: Ceefax page 312 (news in brief), here's a few snippets of information from EFW Towers. This is in no way just a "filler" to make up for the fact none of us have been on a European Football Weekend this week. Nor is it a reason to shoehorn in a photo taken from my bible, 'The First World Atlas of Football' of a map of Slovakia and Czech Republic with the football teams strategically marked out.

Next Thursday the EFW Roadshow rolls into Slovakia for the start of the third annual European Football Weekends Oktoberfest. We're off to see Slovan Bratislava v PSG in the Europa League. Sadly, there have been rumours about some off-the-field shenanigans - but fear not, we have a local guide in the shape of @BritskiBelasi who has agreed to take us under his wing for the day.

From Slovakia we - there's around 40 of us from all over Europe - move on over to the Czech Republic to see games at Slovan Liberec, Sparta Prague B, Tempo Praha, Dukla Prague, Admira Praha and Viktoria Plzen. We're even wheeling the EFW bingo bus out of retirement to take us to Liberec on the Friday because that's the way we roll. Well, that and the fact the train didn't return into our base in Prague until 7am in the morning, and frankly we're not getting any younger. That'll be seven games in two countries over four days then. Marvellous. Reports and all of the usual gubbins will saturate these pages in the coming weeks.

Those crazy fools erudite folk at Picklive have decided that I'm a "safe pair of hands". I've been selected as one of the judges for the NOPAs 2011. Last year EFW staggered away from this event with an award for best blog. It was safe to say beer had been taken and the actual trophy took a bit of a beating. Anyway, my year of open-top bus parades comes to an end on December 15th at The Old Finsbury Town Hall. It's a brilliant night which is more about socialising and funnies than the actual prize giving - just how it should be. Click HERE for more information.


-----------------------
(Danny) Lastly, there could well be a very cheeky Polish EFW taking place in December with his nibs, @theballisround and I. This is part of a very exciting project with the good people of @inbedwimaradona, the finer detail of which I'm not sure I'm allowed to mention just now. Needless to say that with IBWM on board it'll be absolutely fantastic. If you can't wait for that then @Ryan_Hubbard is out in Poland as I type this nonsense, and he'll be reporting back from his Polish EFW on these very pages next week. To whet your appetite for that, he's already sent us back a photo of the Ruch Chorzów floodlights.... 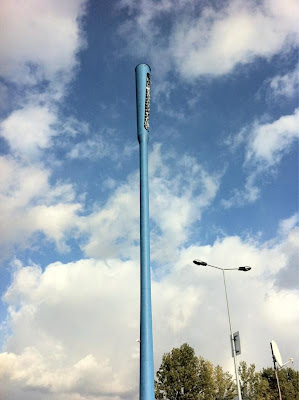 So tall and thin, it makes me grin. A Ruch Chorzów floodlight, yesterday.
Follow European Football Weekends on Twitter
Posted by Danny Last at 10:56

Iain T - i'll be looking forward for the monday night game - still have to sort out the details with my flight leaving prague at 23:55 - don't know how i'll do that.

Hmm, well assuming we get the first train back after the game, at 20:50, you won't get to the airport before 23:26 using public transport. A taxi might be the best option(train arrives at Praha-Holesovice at 22:30). We can talk about it next week as well...