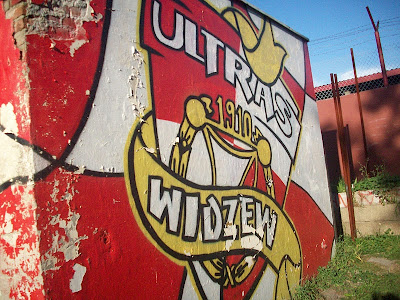 I Would Do Anything For Lodz
Widzew Lodz 4-2 Jagiellonia Bialystok (25:09:11)
Nothing gives me greater pleasure than to welcome 'Adventures in Tinpot' legend, Kenny Legg back to European Football Weekends....

The man: "Kenny, are you free to go to Warsaw to do a presentation in late September"

In the big (imaginary) AiT book of football there's a chapter titled: "Places To Go And Watch Football Before You're Really Old" - Poland was definitely near the top, somewhere below Buenos Aires and Istanbul, just above above Guernsey and way above Bashley. I've heard that in Poland the weather is shit, the fans are aggressive, the stadiums are crumbling and the football isn't great; well these are all massive ticks in the appendix titled "AiT Criteria For A Cracking Trip." 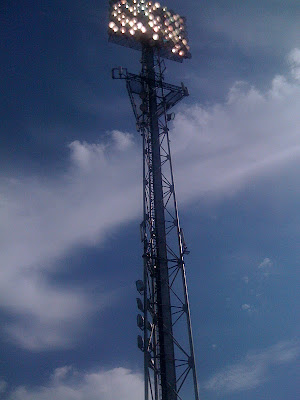 Think there's a bulb gone up there mate.
Lodz was boiling and this meant the Widzew fans, almost to a man were sporting headgear in the style of Liam Gallaher from the Be Here Now tour. Quite frankly I wanted one of those Widzew emblazoned beany hats to doff in their direction.

The Widzew fans were more interested in having a few beers and keeping cool than on cracking some skulls. If they did fancy being proper nawty it wouldn't have been hard to track down any Jagiellonia Białystok fans, a group of ten, who all looked identical, had set themselves up outside of the ground supping a cold Harnas in the midday sun. If my brief survey of the males of the north eastern Polish city had taught me anything its the local Police will only ever require one male photo-fit picture and the Bialystok version of Crimewatch must be a massive waste of airtime. "The man we are looking for has the build of a portaloo, a severely shaved square head, was wearing a black shirt tucked unfeasibly tight into his trousers and probably stole the handbag to fund a burgeoning addiction to steroids. He may also have been wearing a bumbag" 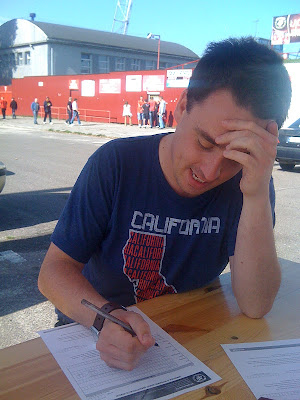 The questions for to get the ID card proved quite taxing. “Surname....ehhh...”
As usual, when I go to a foreign field, I am overwhelmed by an irrational urge to buy a scarf to wear once and then shove in my retirement home for unloved scarves. The only options in Lodz were from two shops that sold an array of cheap tat. They catered for all the family; scarves celebrating the long standing 'Hooligan Family' relationship with Ruch Chorzow for the nostalgic Grandad, something pink for the lady, a mug proclaiming 'The Chipmunks' as Widzew fans for the young ruffian, the Liam Gallaher beany hat for everyone and, for the fashion conscious hooligan, the Widzew balaclava, T shirt with a bloody knife motif, Widzew mouth guard and the ultra stylish (see what I've done there) cheap Widzew 'Hooligan" white sports socks. 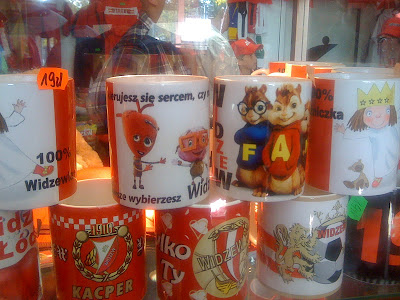 Alvin and eh, Feodore are big Widzew fans.
The stadium was as ramshackle as we'd dreamed. A vast grass bowl housing huge concrete steps all, somewhat unnecessarily, illuminated by cloud scraping floodlights. Inside, weather beaten seats were disturbing the rapid weed growth on the exposed terraces and, most importantly, we had a spot offering us a genius view of the Widzew Ultras.

They start slow and build from there. The teams are greeted by a slow hand clap but after that the 3 drummers and 2 Kapo's lead every chant with lung bursting enthusiasm and hear it returned with a chorus of voice box damaging pride from a devoted crowd that follow every order and make for a superb, noisy and unrelenting spectacle.

A goal for Bialystok after fifteen minutes means things are cranked up an ultra notch. The big Widzew flags and dished out and a couple of minutes later the order comes out to get the shirts off as Piotr Grzelczak scores an equaliser. 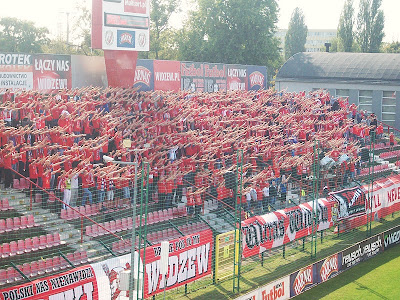 The arms out in front.
The chants don't stop. There's the one where everyone lunges forward, the one where everyone jumps on the spot, the one where every section of the ground takes it in turns to chant and twirl their scarves in the  (the piss poor attempts by the Krewetka brigafe kanapkę** in which the main stand get's laughed at) and the one that sounds like 'shall we stab your mother' (yeah, no thanks lads.....actually, what are your rates for a slash to the lower thigh?) My favourite involved half the block sitting down while the other half stands and urges the team on and then, the cheeky switch, down is the new up, the groups have swapped positions and yet the chanting continues vociferously unabated. 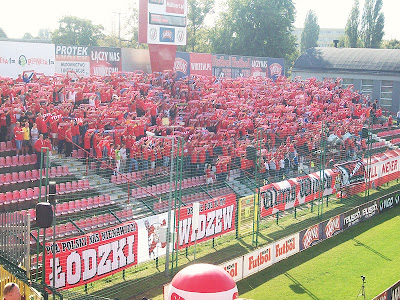 The scarves up high.
The second half starts with the same slow hand clap but then one of the Kapo's serenades the fans for a couple of minutes with a power ballad ('I would do anything for Lodz....but I won't do that' perhaps? Yes, I know it's not pronounced like that) to stony silence. Thankfully for him he's saved from this Kapo Cul de Sac nightmare when Sebastian Madera royally twats it in to give Widzew the lead and send the ultras bonkers barmy. A lead that lasts a minute but is restored, and then doubled, within the next 15 minutes thanks to goals from Bieniuk and Budka. 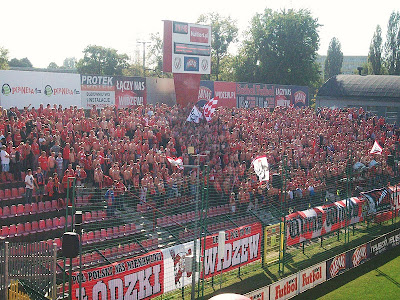 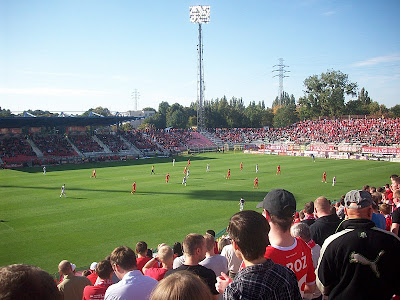 Token match shot.
From then on it's party time for the Kapo's and theWidzew Ultras. Twirl your scarves, lunge forward, get your shirts off, sit down, jump around, arms out in front, belt out the same Lodzki widzew ole ole chant for five minutes, quiet down and then extra loudly belt out the Lodzki widzew ole ole chant again for another ten minutes. That must be a magical feeling to lead that many people, although granted, you've not got a clue what's going on in the match though. 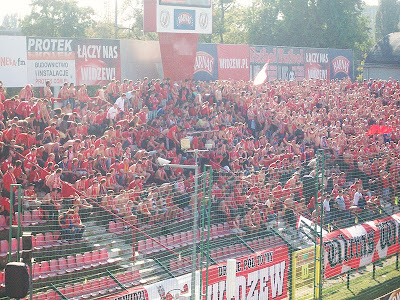 The sit down/stand up.
At the end of the match the victorious Lodz players stand in front of the Ultras, lead some chants and respond to the rhythmic orders of the Kapo. It's great to watch, the togetherness and camaraderie between fans and players is a long way from anything imaginable in England and it's been a joy to spend the afternoon in the sun witnessing the skill of the Kapo's, the passion of the Widzew fans and occasionally glimpsing the entertaining fare on the pitch.

My work presentation? Yeah, that didn't go so well. Asking for a megaphone to do my presentation wasn't met with the enthusiastic response I expected, the Widzew Lodz balaclava was a fashion faux pax, not everyone concured with my chant based hypothesis that 'Somerset is full of shit, shit and more shit' and yes with hindsight, my attempts to get 80 of my work colleagues to take their shirts off and twirl them round their heads was massively misguided. Damn you Widzew Ultras!


Click here to see the goals.
*"Steps removed and sequence shortened.
** prawn sandwich brigade. Hopefully.
If you don't pay a visit to Adventures in Tinpot by Kenny Legg at least once a week then I'm afraid you're a waxy, scale-scrubbing cretin.
Follow Kenny's Adventures in Tinpot and European Football Weekends on Twitter
Posted by Danny Last at 11:23

And on the Seventh day, the Lord created Kenny.