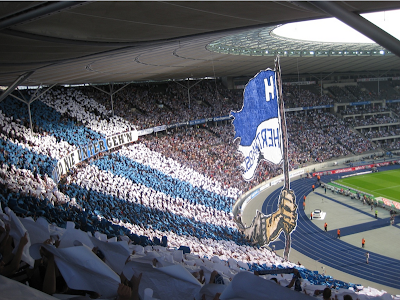 Everybody Needs Good Neighbours
FC Union Berlin 3-0 SC Paderborn (05:08:11)
Hertha Berlin 0-1 FC Nürnberg (06:08:11)
The t-shirts, beer cups and the signs on the numerous merchandise cabins dotted around Hertha Berlin’s Olympiastadion all bore the same slogan: One city. One club. One goal, writes Thomas Carding. Despite this boast, and as anyone present in the very same stadium during last season’s Berlin derby can testify, the Old Lady is starting to take note of her upstart eastern rivals. On a rare weekend when the German capital hosted both the Hertha and 1.FC Union Berlin, last year’s Derbysieger, the German capital showed it is far from a one-club city.

Already three games into a busy 2011/2012 season, spirits were low at Union Berlin’s Alte Försterei stadium on Friday night. After leaving Frankfurt with one fortuitous point in the season’s opener, a 0:4 home crushing by Fürth was followed by an early exit from the German Cup at the hands of fifth-tier Rot-Weiss Essen. Even the scoreboard seemed resigned to further disappointment, its ‘inspirational’ pre-game message a quotation from David Lloyd George: “The proof of heroism is not in winning a battle, but in bearing a defeat.”

This hardly helped to stem the palpable air of tension in the Köpenick forest. The customary chant of Fußballgott! which normally greets the names of the starting line-up was noticeably quiet for certain new additions to the Union side. This time, the ritual was accompanied by a banner decreeing that the title of ‘Football God’ was one that must be earned. Another banner unfurled by the Ultras just before kick-off summed up the general mood among the Unioner more succinctly: Unzufrieden. Dissatisfied.

The power of the cult club’s fans, however, can also be a positive force. Hollering along to the club’s hymns, Stimmung in der Alten Försterei and Eisern Union, by East Berlin heroes Achim Mentzel and Nina Hagen respectively, and then taking over the mantle themselves after kick-off, the wall of sound they create almost seems to create another line of defence. When your goalkeeper is a month shy of his nineteenth birthday and playing his first ever professional football match, this is quite an asset. All told, young Kilian Pruschke, covering for the injured Marcel Höttecke and Jan Glinker, had little chance to distinguish himself during a quiet evening in front of the Union goal. Most of the action happened at the other end. 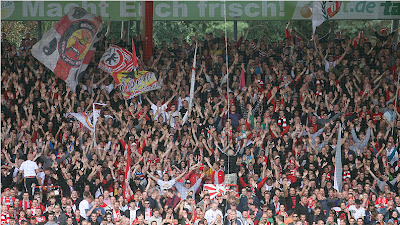 Eisern Union
‘Iron’ Union are a proper, proud, working-class club, with their roots in the East German trade union movement. Sometimes, the football their representatives on the pitch play can be appropriately straightforward, no-nonsense, traditional fare, all long hoofs, tough tackles and flying wingers. That Union’s first goal of the afternoon came from a set-piece does little to dispel this somewhat simplistic notion of Germany’s Stoke (that the Potters’ Robert Huth is a local boy who was plucked from Union Berlin’s youth set-up hardly helps). Christian Stuff, a strapping Berliner in the Huth mould, had found so much room in the box that as soon as the corner was kicked, you knew it was his to squander. A powerful header, beating the Paderborn keeper’s outstretched hand and hitting the back of the net, emphatically answered any momentary doubts that it could be quite so straightforward.

While the fans roared on, Union seemed to hold back a little, with promising wing play from young Christopher Quiring and fit-again Michael Parensen (nominally a defender), petering out upon reaching the Union strike force. Simon Terodde and Silvio, both promising against lesser opposition (and Hearts) in pre-season, have yet to really find their feet this season, and will have a lot to do to replace the confirmed deity Karim Benyamina, who left for FSV Frankfurt in the close season.

When Union’s lead was doubled in the second half, it was promising in terms of both source and execution. A long, but by no means aimless ball from Markus Karl set Quiring racing, with the helpless left-back no match for the twenty year old’s pace. The first touch deftly wrong-footed the keeper, the second slotted the ball home with a calmness that belied his years. A third goal, and euphoria, soon followed, Quiring netting his second after Paderborn’s keeper could only parry Silvio’s shot into his path.

Three goals up with nearly twenty-five minutes to go and facing little resistance, Union’s players were content to sweep the ball around, possibly trying to build up confidence in an amateur goalkeeper and a defence that had been decidedly porous of late. Within minutes, however, the cries of Olé had turned into whistles and shouts of ‘Pfui!’, as the pre-match tension once more bubbled to the surface. After three disappointing matches, the Union fans clearly weren’t ready to see the Berlin bear sit on its haunches and retract its claws so soon. This being German football, in particular Union Berlin, what the fans want goes. But while the tempo did pick up a little, with Quiring and Parensen subbed off, the boys from East Berlin did not offer much of a threat, and the 3:0 was a formality.

By the final whistle, all negative thoughts and pre-game doubts seemed to have been forgotten. Union, though, will find themselves up against much tougher opposition than Paderborn this year, and with the momentum of the resurgent Hansa Rostock and Dynamo Dresden (Union’s next opponents), and the constant threat of nearby Energie Cottbus, they don’t appear well-placed to become the next team from the former East Germany to crack the Bundesliga. There are, however, some reasons for optimism: the flashes of dynamic attacking football, the comfort with which Markus Karl seems to have stepped into Dominic Peitz’s shoes in the ‘number 6’ role in front of defence, and perhaps most obviously, the pool of young talent at their disposal, all mean their blue and white rivals at the far side of the city will eventually have to take notice.

Fast forward roughly 18 hours, and the mood outside the Olympiastadion matched the sunny weather. Basking in the afterglow of their successful season in Germany’s second league, which had brought instant promotion back to the Bundesliga, flags proudly proclaimed ‘Nie wieder 2.Liga!’ A hassle-free victory in the DFB-Pokal the previous weekend, also against fifth-tier opposition, had served to heighten expectations. Much of this is based on the young team Markus Babbel had moulded in the previous season, in particular the nineteen year old Pierre-Michel Lasogga, who in his first professional season scored thirteen goals and became a fan’s favourite and a regular starter. Goalkeeper Thomas Kraft, lured to the capital from Munich much to the chagrin of the Bayern fans, and his former teammate Andreas Ottl, both free transfers, seemed like shrewd and useful acquisitions. 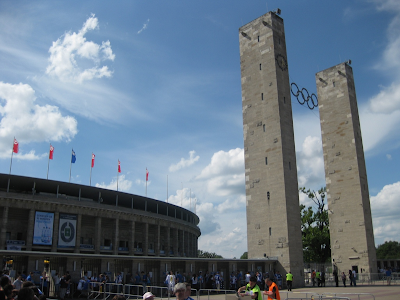 The gateway to the Olympiastadion and the stadium's lawn, still watched over by statues of Aryan sportsmen.
To greet the Bundesliga season’s opener against FC Nürnberg (like the Premier League, the top-level in Germany starts later than the others), the Hertha Ultras in the Ostkurve had planned a spectacular piece of choreography. Timed to coincide with the players’ arrival on the pitch, and the singing of the Hertha hymn Nur nach Hause, this turned the entire end of the stadium into a giant blue and white sea, in front of which a momentous burly arm holding a flag was raised to the top of the stadium with on ropes.

That, sadly, was the most exciting thing to happen inside the Olympiastadion that day. Indeed, the ‘highlights’ collection of the first half later offered on Sky featured, after the said choreography, some choice pitchside advice from a Hertha-supporting actor (‘Just try and remember to breathe. Breathing is always important.’), a 31st minute incident in which the linesman was hit in the face with a ball, and then a collection of fouls. And no actual play whatsoever.


The main diversion early in the second half was the incredible and bewildering level of hatred shown towards FCN’s keeper Raphael Schäfer, an ear-piercing medley of Pfuis and whistles and even an effigy hanging from a makeshift cross. It wasn’t until almost fifty minutes into the game that Nürnberg, the more dominant side throughout, had a half-chance, and even then, it was a tame header from the edge of the box. Kraft, presumably for want of something to do, positively leapt onto the ball.

By the mid-second half, attention was beginning to wander from the game and discussion in certain sections was turning to the curious nature of fan-friendships in German football, possible reasons for the abuse Schäfer was receiving, and a planned trip to wander over to the Le Corbusier skyscraper adjoining the Olympic park after the match. Lasogga and Ramos, who had gobbled up goals in the 2.Liga, went hungry here, with barely even scraps to feed on from a tight opposition defence and a home midfield entirely devoid of ideas. Ottl broke up the play well, but then did not seem to know what to do with the ball. Hertha seemed to be missing a creative spark, but the Brazilian Raffael, relegated to the bench after disciplinary issues, looked disinterested when he was finally introduced. 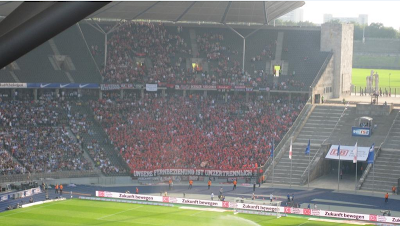 The Nürnberg fan block
Meanwhile, Nürnberg were starting to awaken and threaten even more. Positive substitutions, with striker Alexander Esswein heading wide in a 4-3-3, and Jens Hegeler offering a link from midfield, eventually brought the breakthrough. Hegeler pulled back a cross from the goalline, and Czech international striker Thomas Pekhart, formerly of Tottenham, ghosted in at the front post to secure a neat debut goal. The final result of 0:1 was perhaps what Hertha deserved for an unadventurous and uninspired display.

It was a rude awakening for a team dreaming of a ‘rightful’ place in the Bundesliga and perhaps harbouring hopes of European football. Nürnberg, a team who finished 6th last season, were never going to be a walkover. If, though, such a powerful and positive atmosphere cannot spur the players into life, they may struggle come squeaky-bum time, and a Hauptstadt-Derby next season could still be a possibility.

Union’s game on the Friday night had been a tale of clinical victory assuaging a fair amount of angst and tension. Conversely, Hertha’s was a case of a drab performance turning a festival atmosphere sour. So sour, in fact, that it led to nineteen arrests. Incidentally, a little post-game research reveals that the abuse directed at Schäfer related to a rude gesture he had met the last time the two sides met. Like the excited build up before the paint-dries-faster game, it seems in hindsight like a lot of fuss over very little.

So early into the season for both teams it is hard to speculate as to where Berlin will be on next season’s footballing map. What is for certain is that Hertha should ignore their noisy neighbours at their peril – or they could find themselves embarrassed by their city neighbours all over again.


You can follow both Tom and European Football Weekends on Twitter
Discuss this and more on the new EFW Forum
Posted by Danny Last at 10:30

Good stuff! I thought the Paderborn game would be the turning point, then Dresden happened. But then we beat Bochum at home, so who knows? Maybe Dresden was just a (painful) blip.

By the way, I heard from a pretty reliable source that the Hertha choreography vs. Nürnberg was supposed to be done against Union last season, but because the wind coming through the Marathontor, as Danny will testify, was so strong they abandoned it.

Thank you for sharing such relevant topic with us. I really love all the great stuff you provide. Thanks again and keep it coming.

Thank fl*p the true spirit of football remains refreshingly alive and well in this corner of t'internet. I am 37 years old!