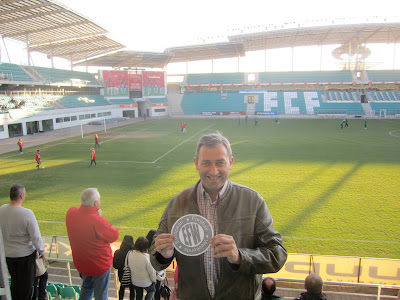 The trip to Tallinn, as far as it was planned, was to see a new capital city in a new country for me, Estonia, the north eastern Baltic state. On the night before I flew out of Liverpool, on the inaugural Easyjet flight, I half-heartedly checked to see if there was a game on, not really expecting one on the Tuesday or Wednesday night. However I found that the first division ‘Meistriliiga’ league leaders - Flora FC Tallinn - had a semi final game in the domestic cup against Lasnamae FC Ajax on Tuesday night, just a few hours after my arrival. Flora play at the ‘A Le Coq Arena’ (sponsored by the local brewer), which is the national stadium, so it seemed worth a visit.

On arrival the attractive blonde receptionist in my old town hotel was soon helping me out, checking whether there was a game on, as information on internet sites were both sparse and contradictory. Phoning my room she helpfully confirmed the details to me. I had problems thanking her with the inability to say her name, which comprised more letters than the English alphabet - and despite my prompting she didn’t seem to have a contracted version of it, for this un-cunning linguist.

After a quick wander around the lovely old town with my camera to snap the medieval architecture under a perfect blue sky it was time to find some ale. I eschewed Molly Malone’s on the grand main square and headed for the nearby Beer House with its promising moniker, and I was soon with a large dark ale and giant pizza. Then it was time to amble down to the stadium, which is just a twenty minute walk south from the centre of town, sandwiched between two railway lines in an unattractive Soviet era industrial area. 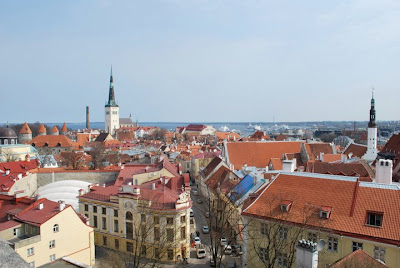 One for the album, that's done. Now where is the boozer?
Arriving about forty five minutes before the game I had plenty of time to stroll around the smart if small stadium. Strangely the stadium colour of choice was yellow, while Flora play in green and Estonia play in blue; perhaps it was a margarine thing.

Despite the 20C afternoon temperature there were oddly still patches of snow in piles around the empty stadium car parks. A few photographs later, with no shops or food outlets about, I was ready to go into the ground. Other than the teams and some security there was no one in the ground yet, and the old lady selling tickets at a desk had to send someone for a key to let me in. Just like Anfield really. Inside I was outnumbered by security by 10:1. 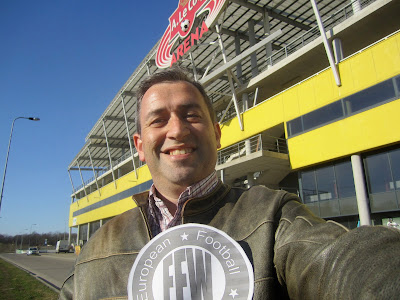 Mr Walker finds Le Coq
The 9000 seat stadium was nice if a tad empty. It was only built in 2001 and as well as hosting the home games of Flora, the national football team play the vast majority of their games here. Estonia beat Uruguay here a month earlier and drew 1-1 with Serbia in the European Championship qualifiers. Their next competitive game here is against Northern Ireland in September in the Euros.

Twenty minutes later I found the bar open. Whilst trying to tempt me with plastic pint glasses full of black garlic bread fragments, I eventually decided on a pint of A Le Coq beer - as far as I can remember it is the first time I have taken a Coq from another mans hand. In the bar area were four southern Brits, two Plymouth and one Spurs fan. Being southerners there was an obligatory Man U supporter. They were all knackered after three days on the sauce and two of them were on orange squash, with the Manc considering a coffee. Southern Jessies!

There was no noise from the pitch side as the match approached, but it was time to get a second beer and to take a seat. Walking out into the stand near the half way line I was soon underwhelmed by the fans filling the seats. I can’t call it a crowd, but the official attendance willing to pay the 4 euros (including programme/sheet) was 195, which is pretty much the average attendance over the last eight years. 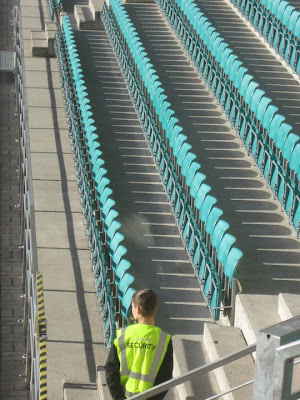 Steward maintaining peace within the stands, tick
As well as having the top spot in the league Flora have an enviable record in the cup having won it twice in the last three years and being finalists six times in the last ten. To get to the semi final Flora had only had to play three games, with a bye in the first and last game (not sure what had happened to the opposition in the QF - suspect they were wound up or couldn’t afford the bus fare), but in the three games they had scored 14 goals and conceded 1. Meanwhile Ajax had scored 22 goals and conceded just 1 in their five games, including a 9-0. Two weeks earlier they had met in the league and Ajax had been trounced 6-0. So on balance a goal fest seemed likely.

The green and white stripes of Flora were playing from left to right against the royal blues of Ajax, who were currently residing rock bottom in the league. It was soon clear that the home team were the most skillful and fit, looking a class apart from their opposition. They took the lead in the 8th minute and hit the bar in the first half, missing several chances from free play crosses and corners. Nevertheless they were only ahead by one goal come half time. 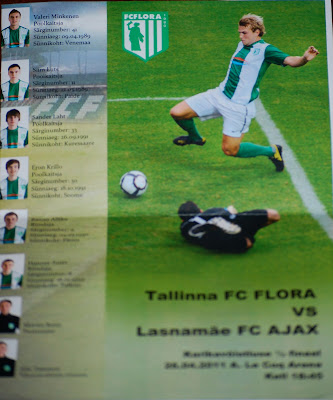 These are now knocking around on Ebay for fifty Kroon. Blink. 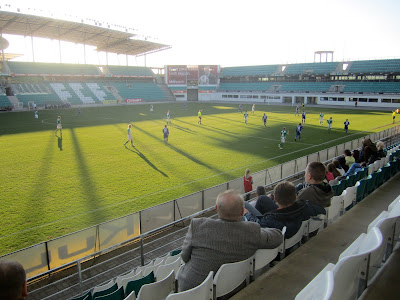 Note to self: try not to think about blonde receptionist back at hotel (repeat to fade)
Throughout the game the crowd noise such as it was came largely from a small group of barely teenage (from the wrong side) girls supporting Ajax, who were sat with song sheets by the half way line. The home team ‘Ultras’ behind the goal comprised about 15 fans, including a less than enthusiastic drummer. Every time they started singing along with the drummer the trill Ajax voices out sung them just throwing in “Ajax” over the “Flora” - you could say they cleaned up. Fair play to their tenacity, though their obligatory high pitch scream at the end of each song was not my cup of tea.

At half time another beer for me (and even the southern softies) and then the teams came out into the rapidly cooling air of the stadium to a rapturous quiet. The game changed with the new half as Ajax seemed to tire and the skill of the home team left them chasing their ever growing shadows. After a couple of cracking goals in the 54th and 69th minutes, there was a sending off of one of the hapless Ajax midfielders in the 74th minute. A goal keeping howler, when he tried to play football on the edge of his own box led quickly to the fourth, an inevitable two goals later and the 6-0 scoreline from a fortnight earlier was repeated. They had hit the post, had some near misses and missed some complete sitters - it should have been twelve!

With 195 fans paying 4 euros a piece not quite sure how the team, let alone the league (or cup) works. Still, an enjoyable romp on the pitch while I sat there with my Coq in hand! Time to walk to the old town and find a pub with the European Cup semi final on... maybe Molly’s.

Nice read. Cool of you to visit Estonia, though the football league is shite.