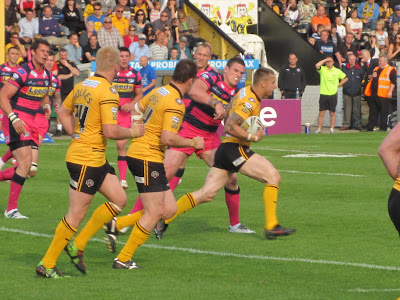 The Battle at Krugar
Castleford Tigers 6-48 Leeds Rhinos (29:04:11)
"I once went to a Bradford Bulls game - didn't have a clue what was going on. left feeling scared, ashamed and like I'd cheated on the wife" (David Hartrick)
(Disclaimer: I am a soft southerner; I giggled at the above; This was my first game of rugby league - save for one in Australia at the Sydney Football Ground, which I attended because it was the only place in town that was open and serving beer - and I don't know the rules).
I was one of tens of millions that tuned into Grandstand in my youth. Rugby League was all over Grandstand like a cheap suit, and yet I can only remember one man and his infectious voice: 'talking trilby', Eddie Waring. Eddie is my go-to man to get out of any conversations about Rugby. He divided opinion apparently, but I loved him.
Giants; Warriors; Wildcats; Dragons....these chaps all belong in American or Australian sports don't they? Those names don't sit well with me in English sport, but having said that - here was a game that pitched The Tigers v The Rhinos at a place formerly known as The Jungle. The new Battle of Krugar? I enjoyed that. Whatever, it certainly ranked higher than the alternative which was a spot on the sofa watching the Royal Wedding - even though it was a five hour drive away.
Being a simpleton and new to this sport, I seeked advice on Twitter before heading north. "Make sure you shout 'good yards' at regular intervals," said Mr Boyes. Not a problem. "They have a bin where you can place your affronts against the Lord." added Mr Whittall. I've plenty of those to confess I thought as I pulled up a chair. "A time keeper sounds a hooter instead of a whistle," Wow, I love my hooters. "It's 13-a-side. No Scrummage, five tackles and then change possession," claimed Mr Booth. That's a nice touch, they give the two subs a go from the start. Boom.
So, Castleford v Leeds it was. A genuine rivalry. If I was going to break my RLD (Rugby League Duck) there was no point fannying around with Harlequins was there? Let's head straight to the heartbeat of the sport and drink it all in. 'Wheldon Road is decrepit, but provides one of the best and most volatile atmospheres in the game' trumpeted my guide book. Woof. Where do we sign? I was excited. 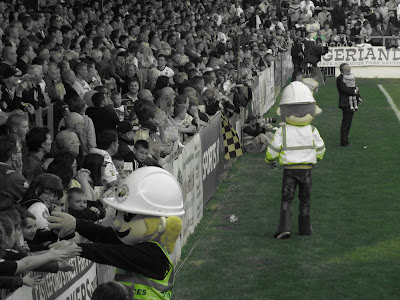 Friendly stewards in comedy outfits, tick.
Old habits die hard, and so our pre-match routine consisted of beer. And football. Beer at the excellent Henry Boons pub opposite Wakefield Westgate station - four pints weighing in at under £10 raised a eyebrow from the Southern contingent - and football in the shape of the last ever game at Wakefield's College Grove, ahem. stadium.
We'd be all be about Rhinos and Tigers at the rugby later, but for now the chat centred around cows, gravy and dogs. Cow tipping is big in these parts according to, cough, an unnamed source. It's an act of pushing over a cow whilst it's stood (stood) there asleep. If you think that's bonkers then get a load of this: some pubs in Yorkshire have guest gravies with their roast dinners. I love my guest ales on draught, but guest gravies anyone? To top it all off there was two dogs in the football ground. The icing on the cake didn't happen though; said canines weren't seen running off into the distance having stolen a string of sausages from a local butchers shop. There's always next time. 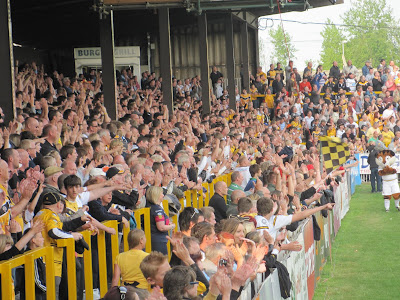 In the jungle the mighty jungle... 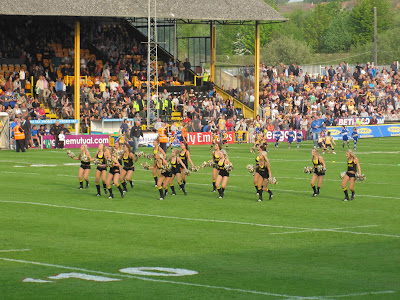 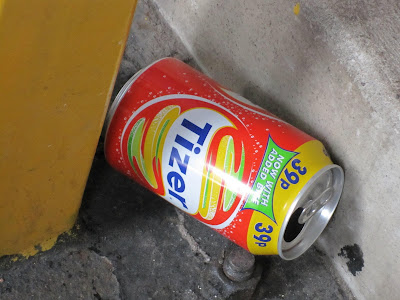 Back to the Future
Today was all about rugby though. (there's a sentence I thought I'd never read on these pages - Ed.). Within seconds of the referee blowing the final whistle in Wakefield, we were off and into a cauldron of noise down the road at Castleford in time for the starting hooter siren. There was our first twist. No hooters in Cas lad.
And Waring was right. It was one ton of rugby - meat, muscle, brawn, brain, the lot of it.
At the start it was loud, very loud. But the biggest cheers weren't reserved for points on the board; rather for bone crunching tackles. I winced. The locals around me bellowed their seal of approval and punched the air with delight.
Then came controversy. Lots of it. Cas had two tries disallowed for marginal forward passes early on. But did the players surround the referee, tug his shirt and point their fingers into his chest? Did they 'eck as like. They accepted his decision(s), the game moved on, and at quite a pace. Yes, players went down injured from time to time, but rather than stop the game, the physios ran onto the pitch during play and attended to seemingly broken limbs whilst the match was still in progress. This I liked very much. I celebrated with a beer.
Leeds played in pink. I'd never thought I'd see a Leeds side trotting out in pink in any sport. I wasn't about to argue with them. They visitors were rampant. Their defence stood tall and their [insert names of other positions that I'm yet to learn just yet] players were all on song. The return of Rhinos' star names Peacock and McGuire boosted the ranks, with the former especially impressive. Carl Ablett was another who caught my untrained eye, and the whole thing was bound together by the boot of Kevin Sinfield. It was tough on Cas who didn't have the rub of the green early on, and they looked weary after that. Three games in just seven days clearly hadn't been kind to them. This is a tough sport. 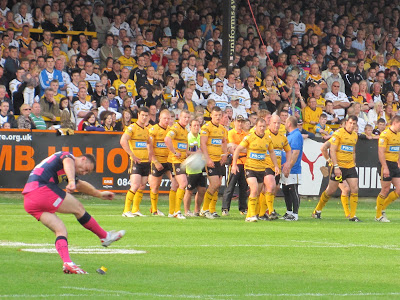 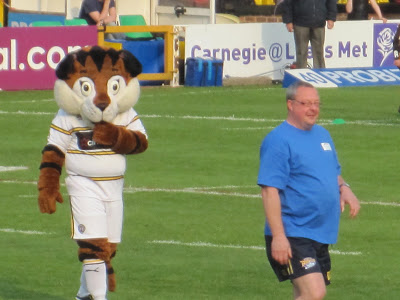 Woof! Gary Schofield is the size of a bus... 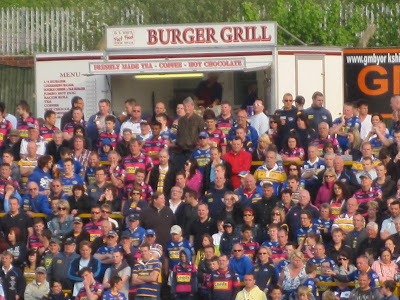 ....he must have been queuing here with the rest of the Leeds support
There was a slight edge to this derby in the stands, but nothing sinister. To me this was just how a local derby should be; passion, songs, banter, flowing barrels of beer and yet absolutely no threat of violence on the terraces. I can't actually recall seeing a single police officer on duty and there must have been a good three thousand away fans in a crowd of 9,860. That figure isn't too bad when you consider Cas has a population of around 40,000.
So will I engage in any more Super League? Yup. Plans were already being hatched as we headed back south with the sound of "Marching on Together" ringing in our ears. Am I hooked already? We'll see. I entered The Jungle with a cynical hat on. I exited it with a spring in my step. No all night drinking session this time. I was home in time for an early bath. 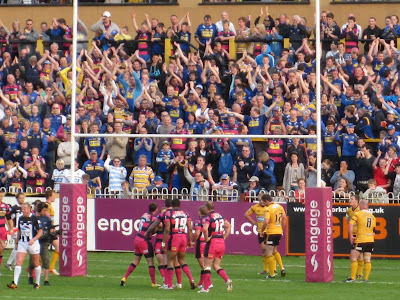 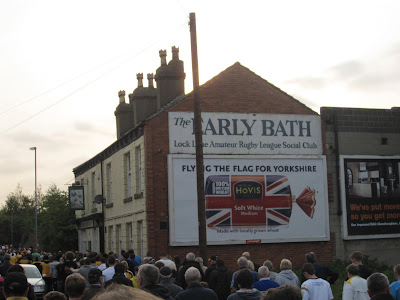 The good folk of Yorkshire head home for an early bath
You can follow European Football Weekends on Twitter.
- Feel free to comment below -
Posted by Danny Last at 10:49

Guest gravies and Tizer. My word you lucked out there. Cool that you enjoyed it, and appreciated the "fan-dom" element more than anything. I have to do the same with baseball etc. I try and soak it up.

Cheers Luge, on my one to visit to the States I just about got baseball, but couldn't and wouldn't ever watch American Football. Too many stopages. The free flowing nature of rugby league was the best aspect. That and cans of Tizer for 39p.